What the Mind Can Conceive, People Can Achieve – Fri., Nov. 30

Imagination, creativity, intelligence, technology, craftsmanship--conception to achievement. From art to buildings to superstructures; these creations are covered in my blog today.


South through Sydney to the coast; today was a good day to leave the Hunter Valley. The temperature is predicted to go to 40 C (104 F) in Cessnock.


Our drive through Sydney suburbs was crowded, but the traffic moved through the city streets with no major hang-ups. We took the Hwy 1 Expressway Tunnel under the Harbour and followed Hwy 1 south until we reached Kirrawee where we turned off the highway to find lunch. Not only did we find a good roasted chicken lunch, we also found beautiful murals and artwork which looked like they were created by local school students. (No signs explained who did the artwork.) 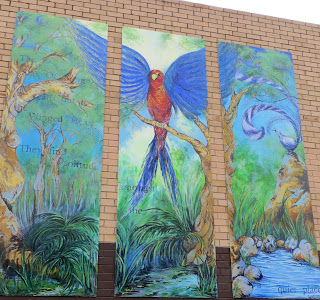 On Highway 1 headed south, we turned east on Lawrence Hargrave Drive and followed the sign to Sri Venkateswara Hindu Temple. We didn’t go in, but I took photos of the beautiful building. 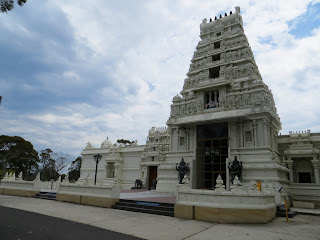 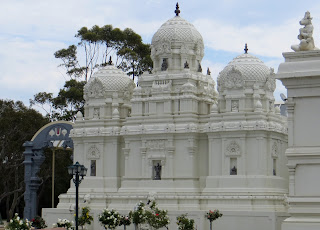 As we were driving down the road we saw a sign for Kellys Falls. We made a quick detour on a side road and did a short walk to see the falls. We could hear the falls and see indications of the falls, but no viewpoint of the whole waterfall. I did get a few photos, though, of pretty scenery and a lizard. 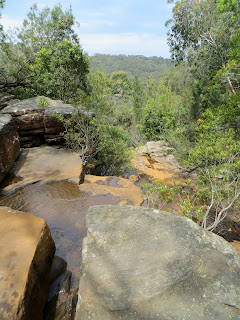 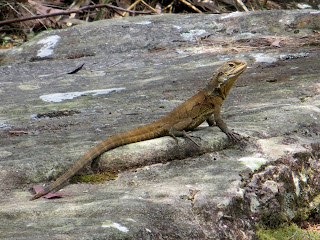 The beautiful coastline and Ocean Baths at Coalcliff. 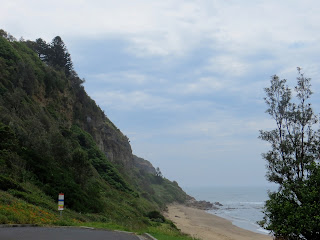 For many years, Lawrence Hargrave Drive was closed because of frequent rockfall, embankment slips, mud and rock slides, weak rock, marine erosion and weathering of the rock. It was too dangerous to allow anyone to pass. 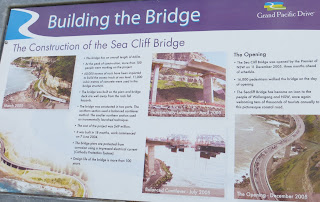 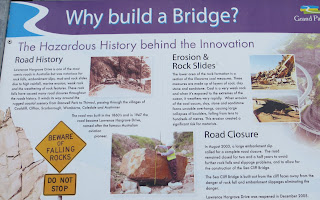 A great engineering marvel, the Sea Cliff Bridge, solved the problem along this stretch of coastline. The bridge was built out over the ocean, away from the frequent erosion of the cliff face. This is a testament to man’s ingenuity. We were duly impressed. There is a turnout with information panels and a walkway across the bridge. 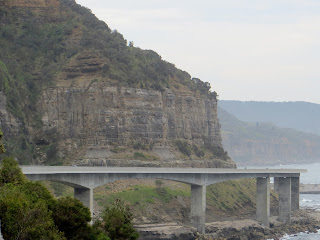 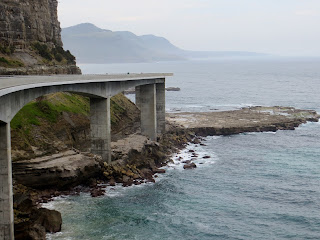 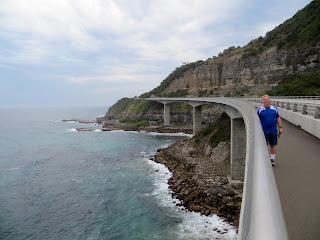 We walked partway on the bridge overlooking the ocean and rock shelf below and marveling at the bridge itself. The day was overcast, but warm and extremely humid, plus the flies were totally annoying. We would have walked farther, but we were too hot. 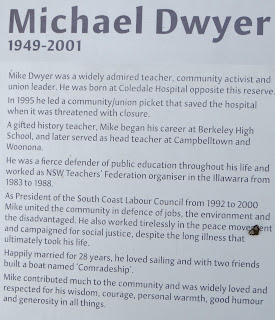 South of Wollongong, Port Kembla impressed us with miles of steel production facilities. The buildings were enormous. Both sides of the highway were populated with steel mills. My head was going back and forth like we were watching a ping-pong match. Bob was driving in traffic, so he looked from time to time.

We were familiar with the road from Shellharbour to Nowra since we had traveled it twice while we were taking day trips from Bowral in the Southern Highlands. That part of the road was on a highway, so we cruised through there rather quickly. In Nowra, we stopped at the Info Centre to pick up maps for our trip south to Victoria state.


I had seen a photo in one of our Coastal Explorer magazines of dolphins surfing the waves at Mollymook Beach. I thought it would be cool if we could see that. The dolphins have been known to surf the waves with the surfers.


Our next stop was Mollymook Beach where we went to the Beach Hut Café and ordered “take-away” (to go) food which we ate at a picnic table at the beach park so we could watch for dolphins. We stayed there about an hour searching the sea and the surf for the dolphins, but none were there this evening.
Another hour later, we checked into our hotel for tonight in Batemans Bay. Our wifi here is incredibly slow and keeps kicking us off. I will try to post the blog, but I’m not sure if I’ll be able to post photos. When we pulled into the Comfort Inn, a gorgeous peacock came to greet our car.
A lizard was catching its dinner at the lights outside our room. 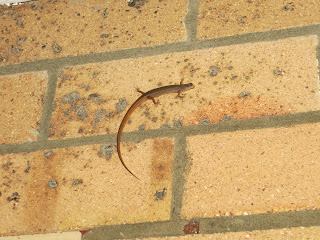 Total change of subject here…A couple of weeks ago, I mentioned I would put some of the local Sydney headlines about our presidential election in my blog because I thought they were clever. Here are the headlines (maybe you’re not sick of hearing about election stuff by now). These are from The Daily Telegraph, Sydney’s biggest selling newspaper, the day after the election.
·         “Barack to the Future”
·         “Grand Vision for Come-Barack Kid”
·         “United Mates of Obama”
·         “Shattered Romney Suffers a Direct Mitt”
·         “You Can’t Beat the Tweet in America: THE big winner of the election? Social media in a landslide.”


We have less than a week left in Australia. : (  We’ll be spending most of our remaining time along the coast with a day in Melbourne.


Tonight we have thunder and pouring rain. Hopefully this storm will break the heat and humidity. All for now. Good night.
Posted by TravelBug-Susan at 7:51 AM 3 comments:

Subway, trains, buses and ferries--we rode them all today with our MyMulti DayPass. For $21 each we rode all around Sydney, visited Bondi Beach via ferry and bus, Darlington Harbour via subway and walking, Circular Quay by bus and we rode a couple of different ferries just to be on the water with spectacular views.

Our timeshare is about a two-hour drive from Sydney. We figured if we drove one hour to a train station with free parking:
We scored big time on all accounts. Our train took us in to Central Station (huge complex with many levels of trains and subways) where we had to ask an employee where to find the subway to Bondi Junction. He directed us and we ended up going down and down escalators and through hallways, but we finally found our subway, hopped on, hopped off at our subway stop, and caught the bus to Bondi Beach waiting outside the door.

For lunch in Bondi Beach, Bob chose a chicken sandwich and I had a chicken tandoori salad. We took the food to a picnic table overlooking Bondi Beach where we watched surfers and paddleboarders catch waves.

﻿
From Bondi Beach we reversed our route on bus and subway, then headed to Darling Harbour. The harbour was so inviting, we walked along half of it looking at restaurants, fountains, and the Maritime Museum exterior where there were some displays in the water.


I never knew before why Captain Cook went to the South Seas. I learned something new today. Click to enlarge photo below.
For the next leg of our Sydney exploration, we took a ferry to Circular Quay so we could explore downtown further. We stopped in at The National Opal Collection to look at the history of opals which was quite fascinating. They have fossilized remains of a Pliosaur. Some of the bones became opalized because of silica that got in the bones which then hardened and developed beautiful colors over the millenia.
We also wanted to look at The Strand shopping mall which is quite famous. 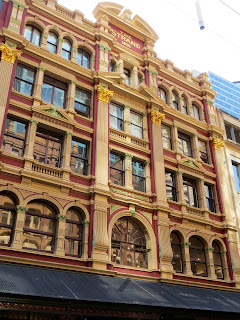 From The Strand we walked a few blocks to QVB (Queen Victoria Building), another shopping mall inside a restored old building which has been gutted and restored. We especially liked the stained glass windows and the Swarovski-crystal-decorated Christmas tree. The QVB shopping mall is four levels. 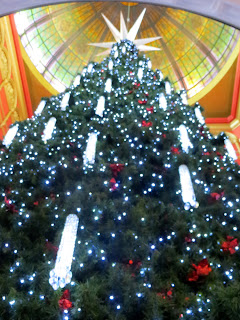 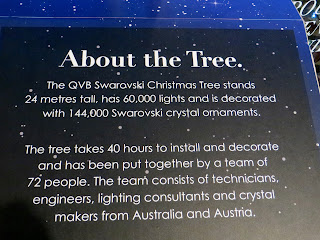 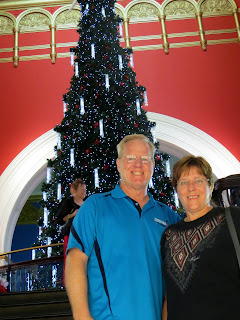 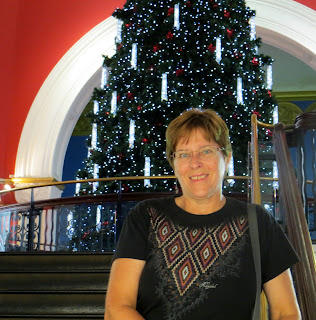 Walking around downtown Sydney on a workday you see that people dress to the nines to go to work. Bob said looking around at some of the women reminded him of the ladies on Sex in the City. I felt a little intimidated in my "holiday" wear. I have to remind myself I'm on vacation, they're not.

So, our shopping exploration complete, we headed back to the ferries and rode two different lines around the harbour. Such a great way to see the views and get a flavor of life in some of the bays. 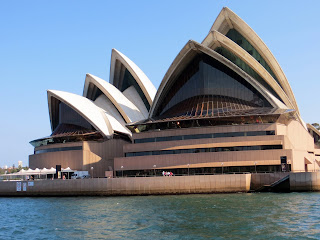 Our brains were full, but our tummies were empty, so back on a ferry to Darling Harbour we sailed. We looked at the menus posted for a number of restaurants and both of us thought La Cita looked particularly good and different from all the Asian food we've been eating. Bob had two chicken burritos with guacamole and I had bell peppers stuffed with sauteed vegetables and rice with a tomato-based spicy sauce. Both of us loved our dinners. We shared with each other and agreed we were both winners in our dinner choices.

As night descended, the Christmas decorations lit up the harbour making it magical. What a great end to our Sydney day. 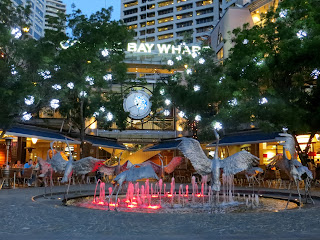 Tomorrow we check out and head south of Sydney along the coast. Our Melbourne timeshare never came through, so we will stay in motels along the way and not be chained to a week in Melbourne. (Although we do plan to spend some time in Melbourne!)

Posted by TravelBug-Susan at 9:58 AM 2 comments: