What is it with me, anyway? Who knows? Maybe you're the same way. I start something, get it almost all the way done, and then leave the last bit hanging. That's the way I feel I've left you, readers, hanging there, waiting for the finish of a number of vacation blogs:


Is it just procrastination? Or am I ambivalent about putting a definitive end point on the vacations? A combination of both, I think. Here is my attempt to go back and finish off those blogs, starting with the most recent trip first--our Alaskan cruise.

Friday, Aug. 3, Victoria, B.C.: Today we spent the majority of the day at sea. Fog enveloped us for most of the morning. By afternoon, when we entered the Strait of Juan de Fuca on our way to Victoria, British Columbia, the fog lifted.

We spent part of our time sitting in the observation lounge looking for whales, but didn't see any. After lunch, we went to our stateroom and I hung out on the balcony with the binoculars looking for whales. Bob was inside reading.

Close to the shore of Vancouver Island, about 4 miles away, I saw a couple of small sightseeing boats, so I scanned the calm water around them and saw lots of whale spouts. I never did see a whale back, fin, or fluke. I was out there a good 20 minutes scanning the water in the distance.

At that point, I was ready to give up on seeing whales. However, I looked closer to our ship. It wasn't a minute later that I saw two spouts close in on the port side of the ship (the side our stateroom is on). I called Bob out. We watched the two whales -- humpbacks (we saw a small portion of their backs) -- go by our ship in the opposite direction (toward the stern of the ship). As soon as they got past the ship, we saw the fluke (tail) of one of them as they dove out of sight. That was awesome.

At 2:00 p.m., we went to the Bliss Theater and again enjoyed the music of Britain's Finest. Lots of singing along was going on in that theater as the Fab Four Tribute Band played songs from their early years in Liverpool's Cavern Club, up through Twist and Shout, A Hard Day's Night, Got to Get You Into My Life, Revolution, and they played songs the Beatles never had a chance to play together (although no singing along in that part because we didn't know the songs). 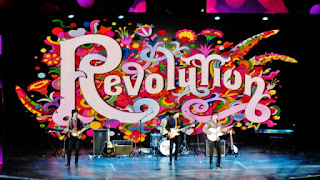 By the time the concert was over, we were almost into Victoria, British Columbia, on Vancouver Island. Pilot boats were waiting to guide us into the slip at Pier A. Our side of the ship got to see all the action.
The pilot boats had white sheets on their bow to keep from making black marks on our beautiful white ship. The diesel-powered pilot boat was below our stateroom for about ten minutes so we had a big dose of diesel fumes while we watched. Cough, cough.
Debarkation started just about 4:00 p.m. We were supposed to meet with the Garden City Wanderers Volkssport Club and they were going to walk with our group. We made it off the ship about 4:15-4:30 p.m. However, Bob and I didn't know what time or where to meet the rest of the group. Obviously, word got out to our group somehow because I saw a photo posted on another site with a big frame that said Victoria, B.C., and a lot of Volksmarchers standing behind the frame.
But we had our walk instructions and we started out on our own. I have to give major kudos to the Garden City Wanderers. Not only did we have the instructions for our 10k walk, they also added historical notes and I will reference those throughout the blog.

We made it out of the parking lot and past the port buildings. As we were walking, I noticed people carrying a big plastic tub and Volksmarch sign board. Apparently we had missed the Victoria club meeting point and they were packing things up.

We followed Dallas Road until we came to Fisherman's Wharf Park which we walked through. On the other side of the park, we saw businesses on piers, and we followed the David Foster Harbour Pathway into the Inner Harbour of Victoria.

Looking at the Inner Harbour/James Bay we saw ferries, sightseeing rafts, water taxis, kayaks, and seaplanes: a large variety of ways to get around on the water! 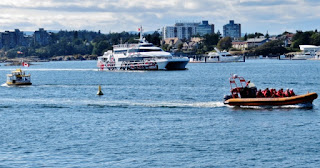 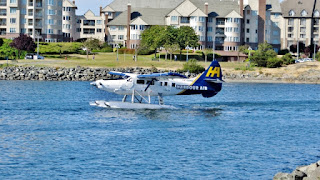 David Foster Harbour Pathway curved around the Inner Harbour and brought us into the heart of downtown Victoria.


The next two photos are taken in Confederation Square (which we were supposed to visit on our way back to the ship; however, we saw it from the road and took a turn into it before the Parliament Buildings). This park shows the Canadian coat of arms and the coats of arms of the provinces and territories that make up Canada. Beautifully done!

From Confederation Square, we crossed the street to the Parliament Buildings. Unfortunately, the building was closed for the day, so we were not able to tour it. It was there that Betsy of the Garden City Wanderers Volkssport Club found us. She stayed with us the rest of the way and we learned a lot from her.

The British Columbia Parliament Buildings were designed by Frank Rattenbury who was only 25 years old when he won the competition for the design. He was a recent immigrant from England. His first round contest drawings were signed with the pseudonym "A.B.C. Architect." When he progressed to the second round, he signed his drawing "For Queen and Province." The architectural styles of the Parliament Buildings are Neo-baroque, Renaissance Revival, and Romanesque Revival. Construction was started in 1893 and finished in 1897. Rattenbury also designed the Empress Hotel, The Canadian Pacific Railway (CPR) Steamship Terminal, Legislative Library, Crystal Gardens indoor swimming pool, and the Vancouver Court House (now the Vancouver Art Gallery).
The Empress Hotel was built by the CPR on pilings driven into the tidal mud flats of James Bay. It opened in 1908 and additions were made in 1929 and 1988. Every time we had been to Victoria in the past, the front of the Empress Hotel was covered in ivy. Apparently they had to remove it to clean the hotel. I asked Betsy if they were going to grow it again and she said she didn't think so. I miss that look!

We continued on past The Empress Hotel and passed the Visitor Info Centre. There was a lot going on. A mime was acting in front of the Visitor Centre. Down the stairs by the harbor were booths and a restaurant. Across the street was a beautiful Orca topiary. I have a photo below, but it's hard to see how pretty it is.

We were on Wharf St. and passed the old Custom House before turning right into Bastion Square. Part way through the square was the Court House built in 1889. There are lots of cool alleys in Victoria and our walk took us through three of them: Trounce Alley with its reproductions of wooden paving blocks (an early solution to the problem of muddy streets), Water Gardens Passageway, and Fan Tan Alley.

Market Square's Main Gate Fountain (above) has three levels of water: one for parched pedestrians, one for thirsty horses, and one for smaller animals, such as dogs, and pigs on their way to market.

Upon exiting Market Square, we were smack dab in the middle of Chinatown. Here we saw Fan Tan Alley featured in the Goldie Hawn movie, "Bird on a Wire," and the Friendship Gate. [Note: Fan Tan Alley was named after a gambling game popular in Chinatown.]

From Chinatown, we crossed the street and walked through Centennial Square with its park and artwork. We passed City Hall, built in 1878. The clock tower was added in 1891. The clock came from England, but was delayed when it was mistakenly shipped to the state of Victoria, Australia! Oops.

We next saw beautiful churches: St. Andrew's Cathedral, consecrated in 1892, and Christ Church Anglican Cathedral, consecrated in 1929. Even though Christ Church Anglican Cathedral was consecrated in 1929, the Great Depression and war years delayed completion of the building. In 1955, the west towers were completed, and in 1971 a two-story addition was constructed and splendid stained-glass windows were commissioned.
Our walk next took us to St. Ann's Academy. Construction of this school and the convent of the Sisters of St. Ann began in 1871. Across the street is part of the former St. Joseph's Hospital, opened in 1876, and operated by the Sisters of St. Ann until 1967.

As we headed back to the Bliss, we passed Thunderbird Park which displays reproductions of totem poles taken from northern coastal Indian villages.

We bade farewell to Betsy at the seawall and thanked her and the club for putting on a most excellent Volksmarch. Hopefully, she can come to Texas and walk with us on our Texas Trail Roundup in February.

Below is an interesting sundial. I've never seen anything like it. Instructions say, "Stand where the centre line intersects the current month line. The time will be indicated by your shadow on the dial (Pacific Standard Time), plus or minus the minutes shown on the month line." The time was right on!

Next, we added about a mile onto our walk by taking the breakwater out to the end. I'm glad we did because it was a beautiful view of the ship!
At the end of the breakwater are some memorial benches. I loved the quote on the one below. 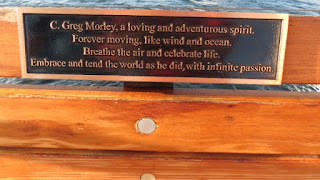 A strong, cold wind had blown in. You can see my hair is blown straight back in the photo below. I was so happy I had my windbreaker on!

We found a great spot to take photos on the way back to the ship. 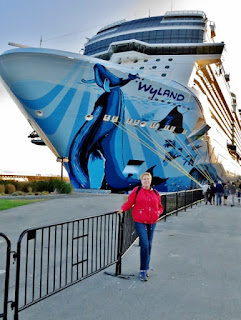 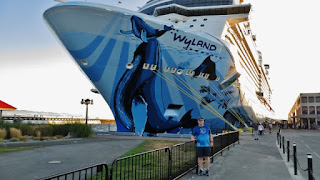 After all that walking (about 7 miles) with no food, we were famished. (I particularly regret we did not have halibut fish 'n' chips in Victoria.) The buffet sounded particularly good this evening. We had all we could eat and then some.

After showers, I just wanted to put my feet up and ice my knee. I spent some time reading on our last night on the ship. Bob walked around the ship for a bit and then he came back and read before he crashed out for the night.

Tomorrow morning, we return to Seattle.

Posted by TravelBug-Susan at 1:53 AM No comments: