You never know who you'll meet! This week, we had the pleasure of spending time with two Aussies staying a few days at Travelers World Carefree RV Resort.

Global Travellers is how Ian Hunt and Penelope (or Pen) Kentish describe themselves which is certainly apt. Their home is in the Southern Highlands of Australia's New South Wales (NSW) state (south of Sydney).

Ten months ago, they shipped their 22' Isuzu 4x4 Global Warrior all-terrain vehicle from Sydney to Los Angeles and started a year-long North American expedition. The all-terrain vehicle is fully self-contained so they are able to "free camp" or boondock. Of course, the steering wheel is on the right side of the vehicle which must make driving in the U.S. quite interesting.
This Isuzu can take them through the Australian Outback and they have used it in Death Valley and Marble Canyon. It's not your typical lightweight 4x4 used in Moab or BLM (Bureau of Land Management) land to off-road on small, rocky roads: no. This baby weighs 6 tons! 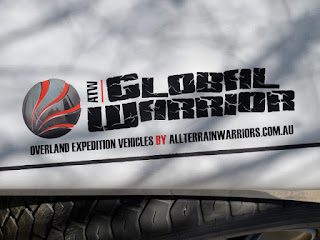 Ian and Pen are retired, but they used to be headhunters: recruiters in a temp. agency. Ian has two grown children and five grandchildren. Pen has one son, but no grandchildren. Their kids and grandkids live in Melbourne, about a 7-1/2 hour drive from them. Fortunately they do see them 3-4 times per year. They love traveling, but the trade-off is they miss their families.

In the Australian Southern Highlands, they live on approximately an acre which is part of a much bigger ranch. They have views of the ranch and own chickens. While they are on their world travels, they rent out their home.

[As an aside, 3-1/2 years ago, we were in the Southern Highlands of Australia and spent a week exploring around the area where Pen and Ian live. Here is a link to our blog from the day we explored in their neighborhood of national parks and waterfalls: Australia Southern Highland Waterfalls.]
From Los Angeles, Ian and Pen traveled to Phoenix, Death Valley, Yosemite, then through the Northwest all the way to Alaska. From Alaska, their travels took them north across Canada to Newfoundland. From their blog, Travels in the Earwig, I learned that they


"have driven to: the most Westerly (Homer, Alaska), the most Northerly, (Yellowknife, North West Territories), most Easterly (Cape Spear. Newfoundland), and now at Key West (the most Southerly) points on the North American Continent. We didn’t start our journey intending to achieve these milestones."

Eunice, Louisiana, impressed them with their parade during Mardi Gras. Called the Run, this  parade of horses and costumed characters on flatbeds starts in the countryside and makes its way into Eunice.

Ian and Pen particularly enjoy going to music festivals or music entertainment venues, such as the Grand Ol' Opry. In addition to live music, they have a large collection of music they listen to when they travel.

Now here they are at Travelers World RV Resort enjoying all that San Antonio has to offer. Yesterday, they went to the San Antonio Stock Show and Rodeo to watch Xtreme Bull Riding, and they loved it. Today they opted to spend time at The Alamo.

When asked what surprised them most about the U.S., they replied, "The 'generosity of spirit' of the people, and the diversity of the landscape." Wonderful people have greeted them wherever they travel.

From San Antonio, they head off into the sunset toward New Mexico, St. George, Utah, and Las Vegas. Canada and the U.S. are the first two countries they will check off their list of 85 countries they hope to visit during their retirement.

We wish you safe travels on the remainder of your United States itinerary, Ian and Penelope. It was a pleasure meeting and visiting with you.

If you see "The Wiggy" on your travels in the next couple of months, be sure to say hello to Ian and Pen. They are delightful. Or you can keep up with them on their Facebook page: Travels in the Earwig.

The show must go on. I'll explain later in the blog.

My work allowed me to leave a little early to head over to the San Antonio Stock Show & Rodeo with Bob. We have tickets tonight, Friday, Feb. 26, for the semi-finals of the rodeo, followed by a Pat Benatar and husband, Neil Giraldo, concert.

The rodeo starts at 7:30 pm, and the concert follows about 9:30 pm. The rodeo is held at the AT&T Center and Freeman Coliseum in San Antonio.

We found parking across the street from the carnival midway, so that's where we entered the grounds. No rides for us, but it was fun to see the carnival.


We arrived just in time for Bob to see the BMX stunt show. The vantage point and sun angle were awesome for picture taking this evening.


After the BMX bikes, we headed straight for the turkey legs!

Instead of dessert at one of the food stands, we shopped around the exhibits and ended up with toffee, taffy and chocolate-covered pecans to eat during the rodeo. [Note: We had leftover desserts to take home!]

All of our "looking around" time was used up and it was time for the rodeo. The AT&T Center where the indoor rodeo is held (and where the San Antonio Spurs play, though not at the same time!) recently underwent a major renovation. One new thing was a huge, colorful mural on the wall next to the escalators.

Our seats were pretty high up in the arena. Our row was mostly empty when we arrived so we didn't have to climb over people to get to our assigned seats. All the following photos were taken from these seats. 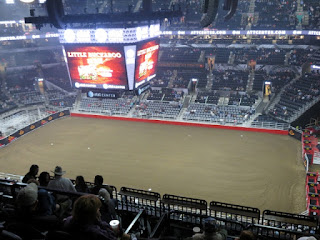 Then the U.S. colors were presented. 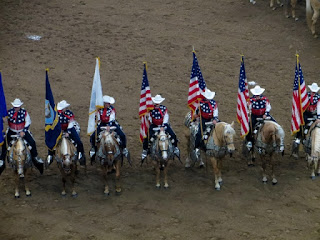 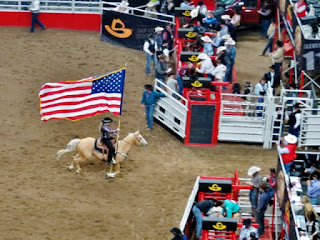 All of the semifinal events had winners except bull riding. Something was making the bulls crazy tonight! One bull that must have weighed about 2,000 lbs came out of the chute and kept jumping straight up into the air with all four feet off the ground. It was like a Jack Russell terrier: up/down/up/down/up/down. Most of the other bulls were whirling dervishes going around and around.


With the semifinals over, our price of admission to the rodeo included a concert. Tonight we get to see Pat Benatar and her husband Neil Giraldo (who used to play with The Derringers). So, after the rodeo ended, a revolving stage was brought out and set up for the concert.

Here we are just before the concert started..

As stated at the beginning of this blog: the show must go on. Two nights earlier, Pat Benatar cancelled her concert at The House of Blues in Houston, Texas, so she could attend her mother's memorial service. I'm amazed she was back on the road so quickly.

The Pat Benatar concert was awesome. She is my favorite female rocker, followed by Joan Jett. I sang along, Bob didn't, though I'm pretty sure he enjoyed the show. Her husband, Neil Giraldo (AKA Spyder) is a wonderful rock guitarist and played with Rick Derringer, Kenny Loggins and Rick Springfield. He also produced music for a couple of very famous musicians, wrote songs for other artists, and composed music for movies.

If you are ever in San Antonio during the middle of February, make sure you spend time at the Stock Show and Rodeo! It is so much fun.

Posted by TravelBug-Susan at 1:30 AM 2 comments:

Sunday night thunder and lightning, plus intermittent bouts of heavy rain woke us up.

Today, I plan to go to the San Antonio Stock Show and Rodeo. Bob is working all day, so he can't make it.

Forecasts predict rain ending about 10:00 a.m. Just to be safe, I don't head out the door before 1:00 pm. It's still cloudy as I drive to the AT&T Center/Freeman Coliseum.

Once parked, I made my way into the grounds of the stock show and rodeo. The first show barn I entered was swine. It looked like there was about to be a show or competition as the owners were brushing and oiling their pigs.

Walking around the grounds, you never know what you'll see. I came upon this cowboy out exercising his horse. 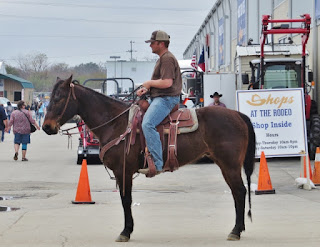 And these youngsters were practicing their lassoing skills on the fake steer.

Then I headed over to the horse show arena and watched barrel racing. There are tractors that work like Zambonis only they rake the arena after a few barrel racers go through. None of my barrel racing photos turned out well...they were going too fast. I'll have to work on my shutter speed before we go to the rodeo Friday night!

The weather was very good in the afternoon. No high winds and the temperature was about 70-72 degrees with cloud cover.

Last year, we didn't go into the Rodeo Hall of Fame, so I made my way there. On one wall there are photos of all the grand champion bulls that have sold during the stock show over the years and the price paid for them. Back in the late 1930s, a bull brought in about $18,000.  Today, a grand champion bull bought at the auction is over $100,000. Wow! That's a lot of bull.

The San Antonio Stock Show & Rodeo is no stranger to winning awards either. It has won PRCA's Largest Indoor Rodeo for 11 years straight!

After spending time in the Hall of Fame, I wandered over to Brad's World Reptiles and  examined snakes, iguanas, a legless lizard, scorpions, frogs, trantulas, and turtles. More on those later.


My next stop was the Texas Wildlife Expo. A reptile show was scheduled for 4:30 p.m., so after I looked at the animals from Victoria Zoo, I went to the shopping arenas.


Shopping at the rodeo...

After shopping where you could buy anything from saddles, to outdoor BBQ kitchens, to cowboy boots, to art, to old movies, I headed back to the wildlife expo for their 4:30 show.

After all the shows and shopping, I was ready for dinner. I checked out the food court options and decided on a Reuben sandwich with an ice cream cone for dessert. I passed up the Hot Beef Sundae (mashed potatoes topped by beef with gravy over all, and some cheese sprinkles), the turkey leg (my favorite, but too big to eat alone), Yakisoba noodles (my second favorite, but again too much to eat alone), and myriad other food court favorites. Desserts offered were deep-fried Kool-aid, deep-fried Oreos, deep-fried Twinkies, deep-fried butter, deep-fried cinnamon rolls, funnel cakes, chocolate-dipped cheesecake on a stick, chocolate brownies, strawberry shortcake ($10.00!!!), and so much more. If the Strawberry Shortcake wasn't so expensive, I would have opted for that. My ice cream cone (not a Waffle cone) was $4.00.

What a day. I headed home after dinner.