Going to Paradise requires an early start. The route is long and circuitous from Tacoma. The "tickets" are paid for by my National Park Senior Pass. Seriously, we followed Google's routing to Paradise on Mt. Rainier and we ended up going on a very serpentine, scenic route we had never been on before in all our trips to Mt. Rainier. Both of us kept saying, "This doesn't look familiar. Do you remember this?" And the answer was always no until we approached the town of Elbe, Washington.
We had just gone past a huge reservoir that neither of us remembered. When we got to the end of Alder Lake reservoir, a big curve came up and I said, "I remember that there are a bunch of cabooses around the corner." Sure enough, we turned the corner and there were about 12 brightly colored cabooses where people can spend the night. It's called Hobo Inn and if you're a train enthusiast this place might be just the ticket for you! These cabooses were collected from around the globe.
Along the way, the low-lying fog looked pretty around meadows and fields. There were wisps of fog rising up off of Alder Lake as well. 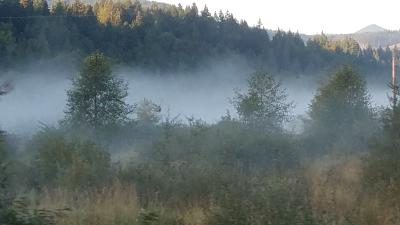 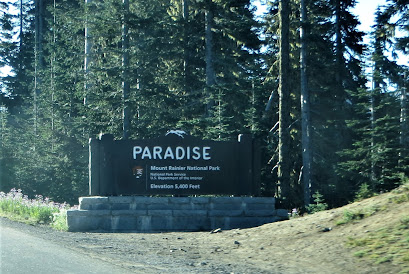 As we made our way through Ashford, we reminisced about the time we took the boys to a cabin at the entrance to Mt. Rainier National Park and the hard hikes we did with a six- and ten-year-old. Also, when we lived in Milton and went hiking at Mt. Rainier on weekends if we headed up to Paradise we ate breakfast at Copper Creek Inn. I always ordered the same thing: fresh blueberry pancakes, two eggs over medium, and bacon. That was wonderful fuel for the energy-zapping hiking to follow.
We thought we were arriving at the Paradise parking lot early. However, when we got there at 8:30 a.m., only a few spots were left in the main Paradise Inn parking lot. They disappeared quickly as cars kept rolling into the lot. We were lucky to snag a spot in our huge pick-up truck! After the main lot filled, there was a secondary lot about 1/4 mile away. After that filled up, people parked along the roadway.
Our starting elevation at the Paradise Inn was 5,400'. After a brief bathroom stop, we started up the Skyline Trail going in a clockwise direction. The paved trail climbed steeply for the first 1/2 mile. My calves had to be stretched because of lactic acid build-up. I stretched and took deep breaths for 5-10 minutes and my calves were fine for the rest of the hike.
Wildflowers bloomed in great variety. I saw flowers I had never seen before and some I had.

As we climbed higher, the views became more spectacular, not only of Mt. Rainier, but also of three other Cascade peaks: Mt. Adams, Mt. Hood, and Mt. St. Helens. The whole panorama opening up before us gave us a sense of accomplishment to see how high we were climbing, and how fast we were getting there. ("Fast" being a relative term considering it took us three hours to reach the highest point on our hike at 7,051'. Panorama Point was 6,227'. Our elevation gain was 1,651'. That didn't include all the times we went up and down on the trail. This trail is rated hard/strenuous.)

The trail surface ranges from paved to gravel, to completely rocky and hard to navigate. Hiking boots and hiking poles are highly recommended! Some of the steps are high and the poles helped me get up them. Also, the poles provide much-needed balance and stability in some of the trickier portions of the trail. If you take your time and don't rush, stop to catch your breath, admire the views, take lots of photos, drink water, and have a snack, this trail is doable and you will be proud of yourself when you finish. Make sure to allow plenty of time!! This isn't a marathon, it's a hike.

As I mentioned earlier, the higher we climbed, the better the views! Here are pics for you to drool over. 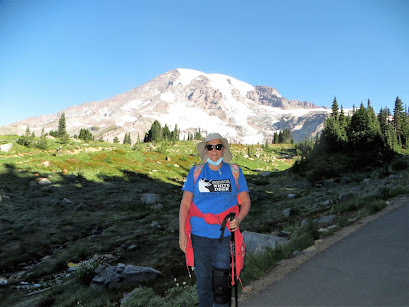 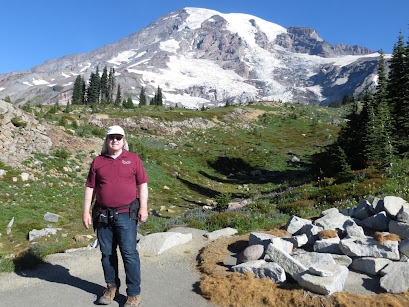 To say the scenery is breathtaking would be literally and figuratively correct. At this high elevation, I was gasping for air from time to time.

In addition to the scenery, I got photos of lots of people hiking on Skyline Trail today! It was very busy on the mountain.


In addition to the views and the people, there were some critters, mostly marmots. I also saw three deer in a gully, but I couldn't capture them in a photo. The hoary marmots, however, were a different story. They were either interested in eating or drinking. Some of them were only a few feet away. And they like to pose. Here is a well-written description of these pudgy "whistle-pigs," for they do like to warn their kind of interlopers. 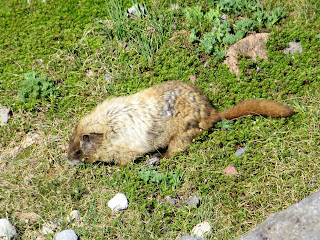 We finished our clockwise Skyline Trail hike by way of Myrtle Falls. We bypassed it, though. In order to get a good view of the falls, you have to go down and back up steep steps. My body said, "Forget it, put a fork in it, you're done." The only thing I wanted to put a fork in was some food!

We hightailed it back to the car. In 45-50 minutes, we arrived at Copper Creek Inn in Ashford, Washington. This place was a favorite of ours for breakfast from the time we lived in Milton, Washington, and hiked Mt. Rainier on the weekends.

Today, though, we were having lunch. I ordered a green salad with blackberry vinaigrette and a cup of chili. My chili came with a small loaf of bread with blackberry butter.  You will also notice that I had a bowl of chili instead of a cup. I guess the waiter heard me wrong. Anyway, Bob helped me eat the chili. Mmm. Bob had a turkey deli sandwich. It was wonderful because our bodies needed protein and the food was very tasty. I should state for the record that even though they have homemade blackberry pies and were just putting some in the oven when we arrived, we declined dessert. What were we thinking?

I drove a good part of the way home, until my ankle hurt and I started falling asleep. Bob took over and got us home safely.

We watched 60 minutes and then I fell asleep in the recliner until midnight. We were exhausted but satisfied. What a day!
Be sure you visit Mt. Rainier if you are in the Seattle/Tacoma/Olympia area. The mountain is huge, but we think the best place to go to is Paradise if you want immediate, spectacular views of the mountain.