Today we set aside time to relax and meet Steve and Joan who write the blog Friends of Steve and Joan. They are volunteers at Lake Mead and their campground is only a mile down the road from us. We invited them to come over. Steve was out at the library doing taxes. When he returned to their MH, they would give us a call. They came over mid-afternoon and we talked for a couple of hours.

As we were saying our "see ya laters," they said, "If you have any extra time give us a call." A few games were brought up that we had never played. Of course we're always game for a new  game.

After they left, Bob and I discussed when we could get together again and thought that this evening would be best. Bob went for a run up to the Visitor Center and I wrote my blog for yesterday. Here are a couple of photos taken from our RV site.

I called Joan and asked if this evening would work to get together; she said yes they were just hanging out. We headed over to their motorhome and were warmly welcomed. Steve came out to our truck with a flashlight so we could see a path to their door.

They taught us a card game called Golf which was very fun. After 15 hands the person with the lowest score wins.

Then we played Liars Dice. Joan wiped us out one by one.

The last game, Qwirkle, was the one that you really had to think  about and use strategy on. The game was challenging and fun. You could almost hear the brain cells growing stronger.
Steve made peanut brittle that was very fresh and yummy. We snacked and had a great evening connecting with Steve and Joan.


It should come as no surprise that we had a lot in common. They started full-time RVing about the same time we did and worked at amazon.com the winter after us. Their current volunteer position is to drive all the roads around Lake Mead, watch for people off-roading where they shouldn't be, and look for anything unusual or out of the ordinary.  If they see anything, they document it with photos, write a report and hand it over to park rangers.

Our evening was well spent. You can bet we'll be spending more time with Joan and Steve in the future as our paths cross.

New topic: Our cat Bowie is just so darned cute! Here he is: 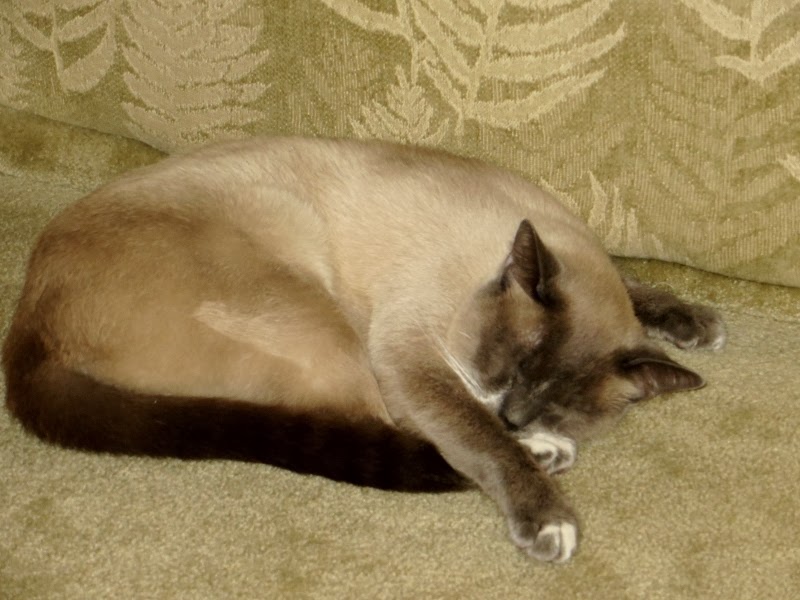 Tomorrow we're off to Henderson to spend the day with Bob's family.

Wednesday morning we walked Roadrunner Trail at Lake Pleasant Regional Park from Roadrunner Campground to the Visitor Center. Sunshine and clear air combined with sparkling deep blue water and more burro sightings made for a pleasant commune with nature. 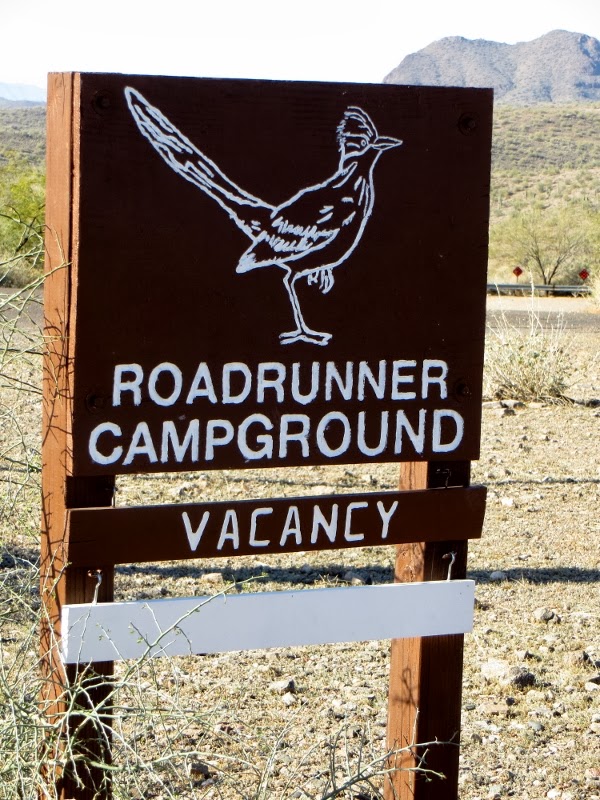 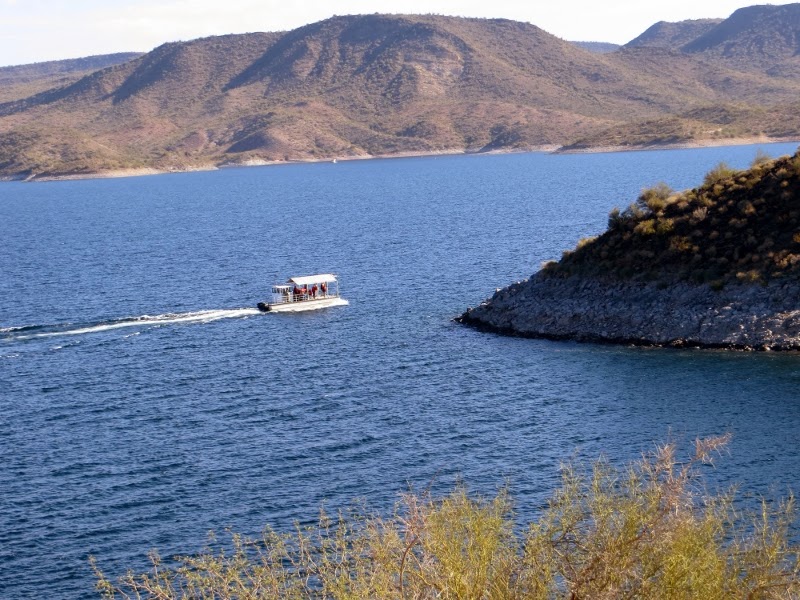 The wild burros were once pack animals for the miners. Some escaped or were let go; they have survived and multiplied over the years.

Today, I drove most of the way including over some mountains with 6% grade. I was doing fine until I HAD to use the restroom. However after driving for miles and miles with no place to turn out and no rest areas or gas stations the situation was getting dire.

Finally we came to a passing zone with a wide enough shoulder to pull over. However, we  were coming off one of the 6% downgrades. I was braking to slow us down and Bob was telling me, "Leave enough room so we have  space to get back on the highway." I stomped on the brake to get us stopped. When I exited the truck I smelled burning brakes. Sure enough, smoke was pouring out of the two back truck tires. Yikes! I was freaking out. The saying, "Where there's smoke there's fire" kept running through my head.

We went to open the door of the 5er so I could use the potty and the door wouldn't open. I started doing "the potty dance." Just before we left on the trip we had a new door lock put on and ever since then it has been nearly impossible to open the door. Bob finally got the door unlocked and I took care of business.

After the brakes had cooled considerably, we headed back on the road. I kept driving but was uber cautious about putting the truck in a lower gear to go down the 6% grades.

When we reached I-40, it was time for lunch. There was a gas station/truck stop with a Subway where we decided to eat. The place was a zoo with trucks coming and going, but we saw a place with truck parking so I headed back there. Thankfully there were some spots where Bob could back us in. (I've never backed the 5er before.) Bob got out of the truck to come around to take over the wheel. I put on the parking brake because we were on an incline.

While I was sitting there I noticed movement out of the corner of my eye. OMG, the truck and trailer were going backward! Holy smokes, Batman! That would not end well. I punched my foot on the brake at the same time Bob started banging on the driver-side window telling me I was rolling backward. Just in the nick of time, too, because a truck was backing out a short way behind us!

I said, "Why won't the truck stop? I even put on the parking brake?!" He replied, "Did you put it in park?" Whoa, Nelly, I forgot to shift into park. Don't know if he's going to let me drive again after today's follies.

Next stop, Lake Mead RV Village for five nights. Bob drove the rest of the way to Lake Mead. When we got to the RV park, our site was assigned to us, but the lady who checked us in seemed a little unsure if our 33' 5th wheel would fit into the back-in site. After we had our directions in hand, we headed to our site. First we had to navigate through a small entrance in a rock wall. Our site looked like a major challenge to get into. Bob gave it the old college try and pulled The Beast back through the rock wall to give enough room to back the 5th wheel into the site.

After two tries, it seemed pretty obvious to us (and the crowd who had gathered to watch) that it wasn't going to be easy to back our 5th wheel and Ford F350 crew cab into that little space without doing a  set of 10-point turns. Lucky for us, one of the park workers was out walking his dog. He called the office and asked if one of the pull throughs in the immediate vicinity was open. It was. Yay! So Bob whipped the 5er around the circle and the park worker directed him into the site. What a relief to be parked.

After all that, we took a breather, then headed into Henderson, Nevada to have dinner with Bob's mom and sister. First we said our hellos and met their four dogs: Jetta, Arie, Mr. Sunshine and Mollie.

A wonderful evening of conversation and catching up with each other ensued. We discussed which days would be best to get together. Friday will be the day to see "The Lego Movie" and we will be joined by Bob's great-nephew, Jayce. Friday night, a huge family dinner is planned at Kris's house. (She's the family's "adopted" sister.)  Very much looking forward to seeing everyone again! We will get to meet Bob's new great-niece, Jovie, as well.

Thursday we left our scheudle uncluttered to relax and meet blogging friends Steve and Joan of FOSJ (Friends of Steve and Joan). They started full-time RVing around the same time we did and we've followed their blog for over two years.

So ended Wednesday. Lots of excitement all day. We were happy when we finally settled in for the night.

Posted by TravelBug-Susan at 8:55 PM 5 comments:

We woke to the sound of braying burros. Quickly, we got up, dressed, ate a bowl of cereal, then headed out the door to hike Pipeline Canyon. On the way to the trailhead, we looked for the burros. And we found them not too far from our campsite; four total.

Pipeline Canyon Trail is four miles round trip (two miles out and back). Our start time was 8:00 a.m. Elevation change on this trail is 202', difficulty is medium. LOVED this hike! I took my hiking poles and wore hiking boots because I read there where a lot of rocks in the trail which is very true. The hike goes through Pipeline Canyon. Saguaro and other cacti populate the hillsides. Don't venture too far off the trail or you could be in an OUCH situation! 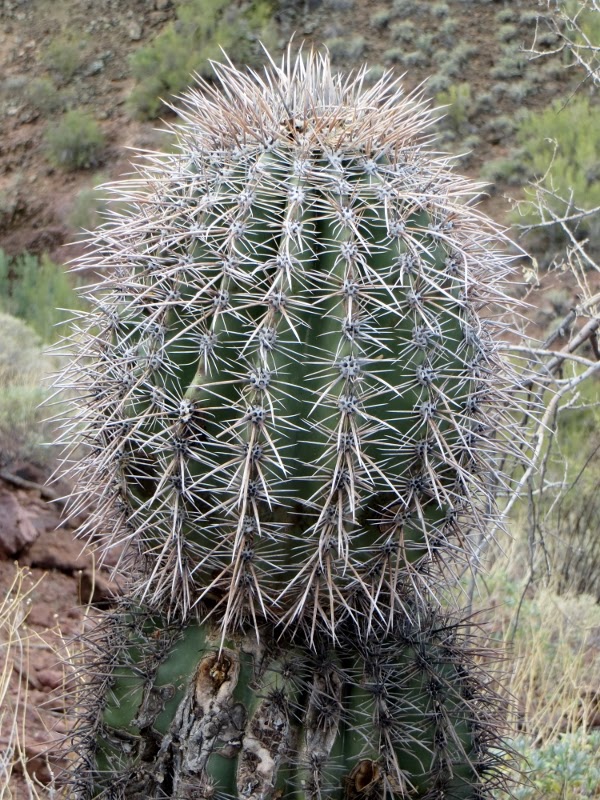 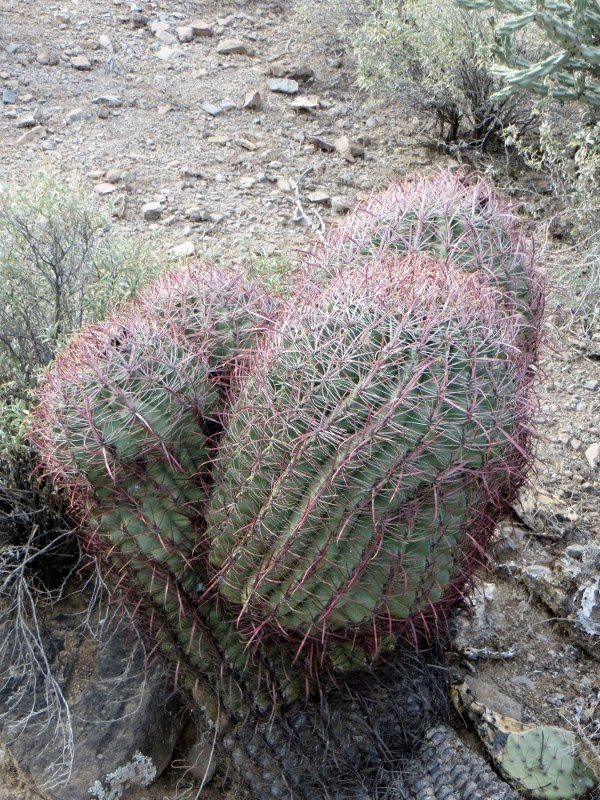 We did see a lone burro down at the bottom of the canyon. I would have missed it completely, but Bob heard it. We stopped and looked. Sure enough, there he was. I started to go down the embankment a little to try for a clear photo. I was met with a loud warning snort from Mr. Burro. I know a "Back Off!" when I hear one.

Here's a new bird for us, a black phoebe. Sorry, I had to zoom way in, so the quality isn't the greatest. 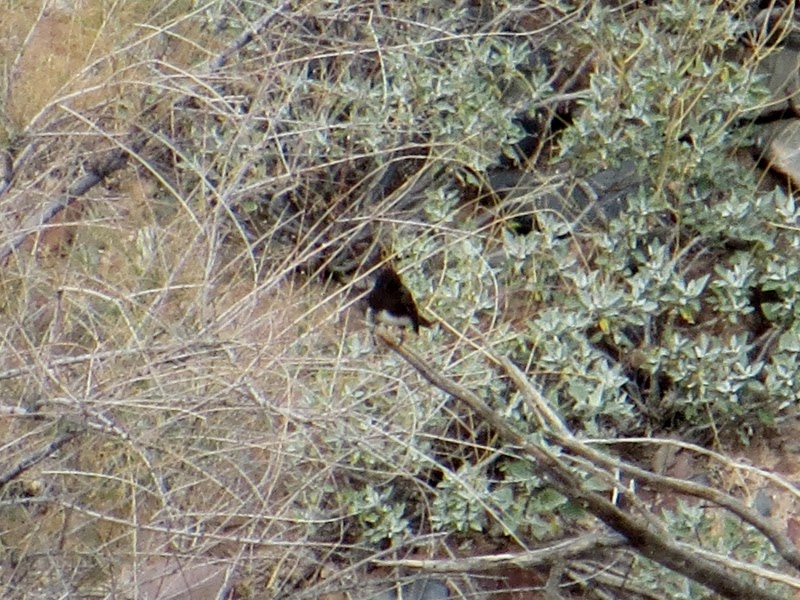 We finished our hike at 10:00 a.m., drove back to the 5er, showered and readied ourselves to spend the rest of the day with Bob's Aunt Sally and Uncle Skip. When we arrived at their home, we toured their beautiful yard. 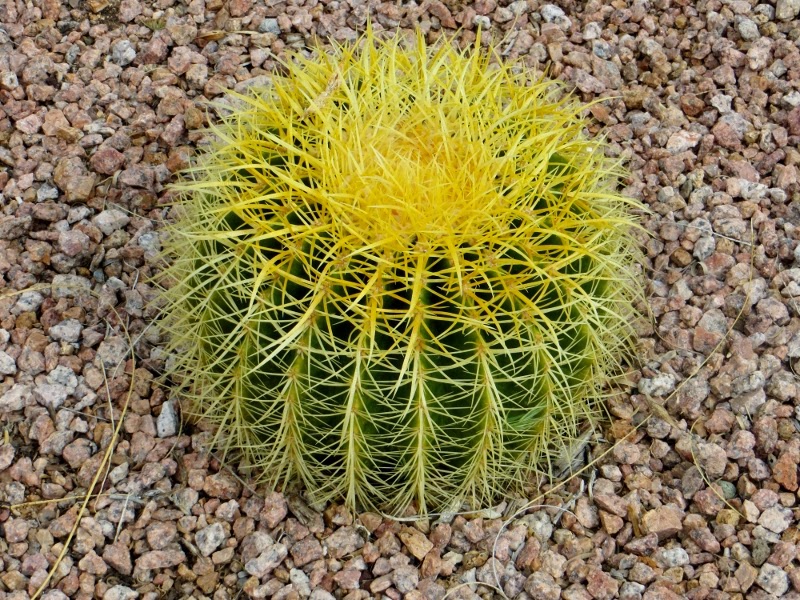 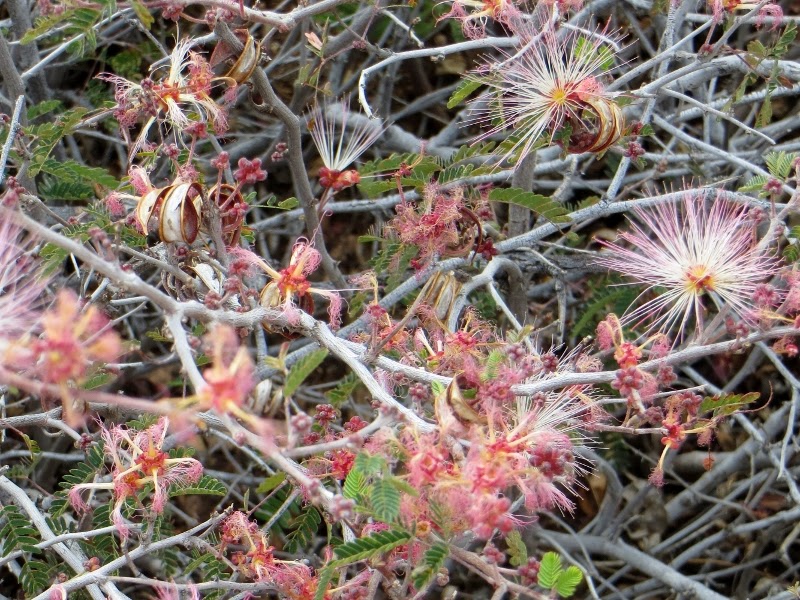 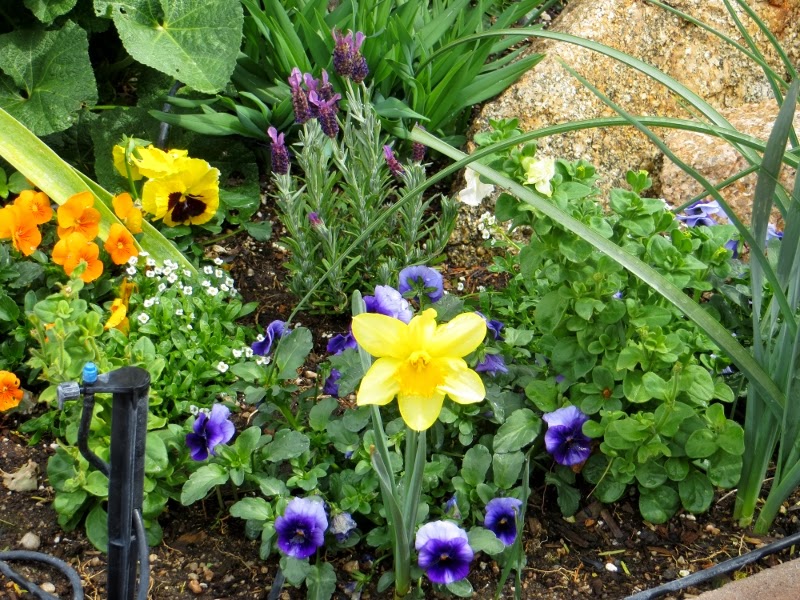 It was noon and we were hungry. First we had a tour of downtown Carefree. Very cute town. For lunch, we headed to Cave Creek Smokehouse. Our lunches were yummy. I had Smoked Brisket Lasagne, Bob chose Chicken Chipotle Philly, Uncle Skip wanted a Reuben sandwich and Aunt Sally picked the Caesar Chicken Wrap.

While we were lunching, a cactus wren, Arizona's state bird, was busy outside the window. The cactus it was in had a couple of nests built in crooks in the branches.

The "Wedding Cake House" below is for sale at upwards of $4 million dollars if you're interested.
After that big lunch, I fell asleep in the car, but woke up just in time to hear Aunt Sally say they had had lost me; I was sleeping. I piped up and said, "I heard that!"

For dinner, we headed to Skip and Sally's house. Lots of quail and other birds frequent their bird feeder. We came home to find a woodpecker posing beautifully for us.

Wildlife loves their neighborhood. They regularly have coyotes, bobcats, quail, great horned owls, and deer. Speaking of deer, one wandered past their gate into the open space beside their house. We had a little chat and this mule deer decided I was okay. 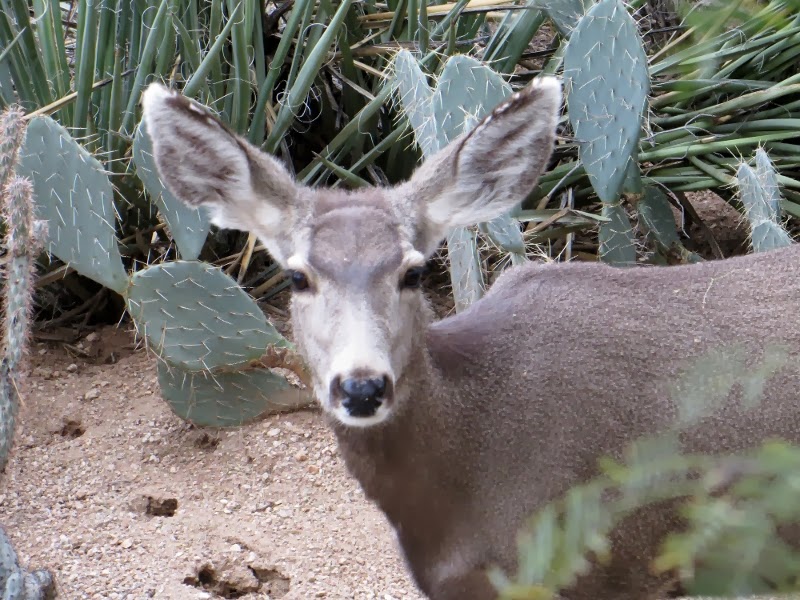 For dinner, Aunt Sally made butternut squash soup and we had crackers with cheese, celery stuffed with herbed cream cheese, and biscuits. For dessert she baked brownies. We were joined by Bob's cousin Charis and her husband, Mike. They brought along their fur-kid, Maui.

As we neared our campsite, a group of four burros were walking along the road. They are adorable.

By 9:00 p.m., we were safely tucked in the 5er, thinking about what we'll do tomorrow. We see another early hike in our future and a trip to the Visitor Center here before we hit the road to Lake Mead, NV.

Posted by TravelBug-Susan at 1:09 AM 2 comments: