It was a dark and stormy night in the Gulf of Mexico. Our cabin was toward the front of the ship and near the waterline. The ship was like a roller coaster and went not only up and down, but side to side.

This morning, Peri and I had reservations for the Cat in the Hat Brunch which was an additional $6.00 per person. Both of us like Cat in the Hat and it sounded like fun. We arrived at 9:30 a.m. and were shown to our seats. The restaurant was decorated with a Cat in the Hat ice sculpture, cardboard posters of the Cat in the Hat, centerpieces, and each place setting had a Cat's Hat red-and-white layered parfait.

Menus were out, and we met the family that shared our table. It was fun to read the food descriptions. 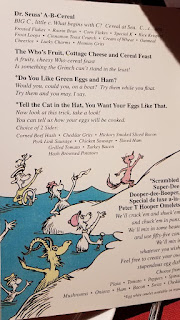 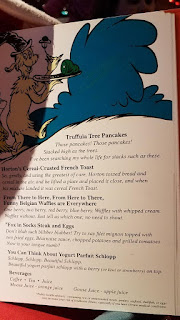 I had to have Green Eggs and Ham! Plus, the Red, White, and Blue Waffle sounded good. In addition, for the beverage, I ordered orange juice.

Because the ship was rocking and rolling so much, the family across the table did not last long. The mom was looking a little green. They stayed long enough to see the characters come out and got their food but then left quickly. After we ate, we watched as families paid extra to get their photos taken with the characters. When brunch was over we retreated to the cabin. Peri wanted to rest. I sat in the window seat and read. Peri told me not to wake her if I went out.

We were invited to play cards with the ladies. After I read for a while and watched the waves splashing up past our window, I headed out to look for the card game. Peri was napping, so I didn't wake her. It was about 1:30 p.m.

We were supposed to meet in the big buffet restaurant. I found Angie there eating lunch, so I got a burger and joined her. About 20 minutes later, three others showed up.

The table Angie and I were at was too small to play cards on, so we moved across the aisle to a bigger table. Unfortunately, it was right by a door and a cold wind was blowing in.

We went in search of a better place to play. The library sounded like a good idea. However, it was so windy and cold outside, the library/game room was full to the brim with families playing games. We finally found a very small bar table near the piano bar and dragged some heavy chairs over so six of us could fit around it. There wasn't a whole lot of room to spread the cards out like we needed to for "Pyramid."

Next, we played "Seven," I think it was called. That also took up a lot of room on the small table. We had a good time anyway. We were there for about 1-1/2 to two hours.

Peri caught up with us later and wondered we had been. She woke up and came looking for us but couldn't find us. I told her at first we were a moving target and that where we ended up was a little out of the way.

Dinner was good and, because it was our last night, the waiters did a Baked Alaska parade with our desserts.

After dinner, we went to the big theater for a good-bye from the crew. The boat was moving around so much that the crew was swaying on stage. After the crew's good-byes, we had one more show.

The finale show had to be taken down a notch. They couldn't put up their stage sets and decorations for the safety of the crew. The heavy sets could fall because of the active seas. No big dance numbers, just the entertainers singing while sitting on stools. It was a much quieter show tonight.

After the early show in the theater, Peri, BettyAnn, Luann, and I went to the Comedy Club. It was fun because of the comedian. He parodied famous songs and singers. 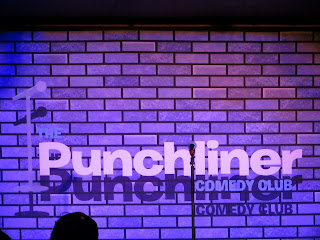 And then it was time to pack. Our debarkation from vacation is tomorrow. We hope for NO FOG when we head into port!! Good night, all.
Posted by TravelBug-Susan at 9:30 PM No comments:

Izamal is a very small town way out in the boonies. As we made our way into town on the bus, we soon saw why it is called the City of Gold: Houses and buildings are painted a beautiful egg-yolk yellow. It is very picturesque, especially with all the arches.

Our huge tour bus wound its way around the streets of Izamal and we stopped at Convento Franciscano San Antonio de Padua. We saw the horses and buggies that would give us a tour in town on our way to lunch.

We walked up a two-story ramp to this impressive convent/church which was founded by Franciscan friars in 1549, but it was not until years later that the building was constructed. It was erected on the ruins of the old pre-Hispanic building known as Pap-Hol-Chac. 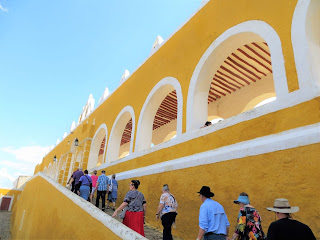 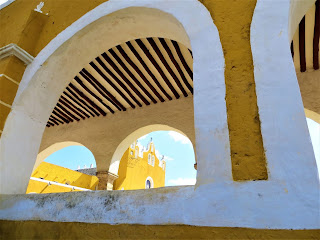 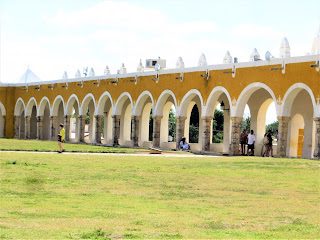 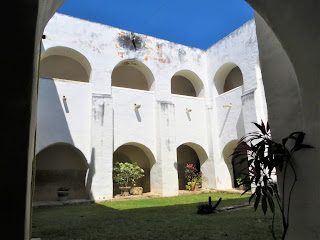 After one-half hour exploring the Convento, we had a few minutes to spare. I went down into the Plaza with the Izamal sign. A couple from England (or Australia -- hard for me to discern which) asked me to take their photo with the sign. Then, I asked them to return the favor. They wanted me to be active so they had me put out my arms and then jump. So I did.


We had a very nice lunch with a choice of pulled pork or chicken. It was served with soup, tortillas, beans, lettuce, and tomato. We could make our own soft tacos. The service was excellent.

After lunch, we boarded our bus for the 1-1/2 hour ride back to the ship. There wasn't any time to shop on this tour except for a few things in the restaurant. Also, there were shops at the pier, but we didn't have much time there either.

I missed having Peri on the tour today. I think she would have enjoyed it. Her day sounded pretty nice, though. She bought a one-day spa package and said she visited the spa about four times throughout the day. They have a thalassotherapy pool, sauna, etc. So she didn't suffer much by staying on the ship.

We reunited for dinner and then went to the show in the Encore Theater which I thought was lots of fun (more rock 'n' roll). Peri is more of a Country Western girl.

This was the end of my Progreso, Mexico day. We are back on the ocean and tomorrow will be a day at sea.
Posted by TravelBug-Susan at 11:30 PM No comments: