Okay, I did it again. We went on a fitness hike. After the first one, I wasn't going to do the fitness hikes, they're just too darned fast for me. But when I read the description of tonight's hike, the "fitness" part didn't jump out at me. They walk 3.5 to 4 mph up and down rocky trails. {{{pant, pant, pant}}} Thank you, Anthony, for hanging out with us in the back so we didn't get lost.

I opted to do one loop of three miles. When we got to the intersection where the decision was made to do another loop, I bailed out to walk 0.7 mi. back to the car.

Bob came separately from work in his truck and he opted to do the second loop. So midway through the walk, we parted ways. 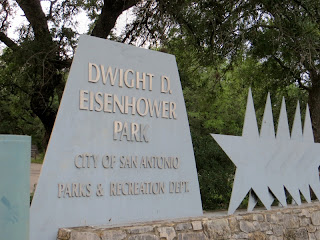 Below is a highly zoomed photo of Six Flags Fiesta Texas. If you enlarge it,you can see some of the roller coasters in the park.

Shortly after the above photo, I opted to head back to the car, 0.7 mi away. On the way back to the car, I moseyed, lollygagged, photographed, admired the scenery and chilled (as much as one can chill when it's 80 degrees and muggy). 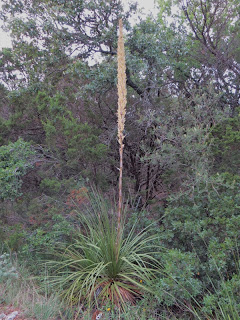 When I returned to the meetup area everyone was already back! Was I THAT slow? No, the rest of the group bailed on doing the second loop. They all wanted to go to Freetail Pizza for pizza and beer.

We followed someone who knew where they were going and found the place. For dinner, we ordered the "Date Night Special,"  a pitcher of beer and a small, one-topping pizza. It was fun talking to Kevin, Nicki and Don for an hour.

What a great way to spend the evening. Thanks to everyone for coming out.

Today I tackled Brook Hollow neighborhood Volksmarch on my own. My Centurion Challenge is getting behind so I need to do more Volksmarches. A good benchmark is 50 walks completed by the end of June. Currently, I have finished 35.

The Brook Hollow walk is very close to where Bob works. The start point is La Taza Coffee House on San Pedro Ave. Most of the walk is in established neighborhoods with old oak trees. The temperature was 84 degrees with 70% humidity and a nice breeze. Even though I developed a moist sheen on my face, neck and arms, the breeze dried me off. There were sprinkles for five minutes, but nothing to speak about.

Here are photos from today's Volksmarch:

From the coffee shop where I finished, it was a short drive up the US 281 access road to the building where Bob works. The office suite is on the 9th floor. There is so much space. He has an office with a window looking south. Nice view from up there. The office just opened up this weekend which is why Bob was working  Sunday and Monday, helping to move in furniture and files. It still looks sparsely occupied now, but they have room to grow.

Both of my hearing aids were having problems so a trip to Costco was in order to have them cleaned. Once they clean them they can tell if there is damage or a problem. However, the Costco near Bob's work could not take care of them as they are closed all week. The Hearing Aid Center sign said to please visit another Costco. Arrgh! That means a detour to a Costco that's 20 minutes away.

Bob joined me on the trip to Costco near his work and we had lunch together. He said it was nice to get away from work and relax for a bit. I took him back to work after lunch, then headed over to the other Costco.

The Hearing Aid Center was busy at the next Costco. I had a 30-minute wait, but it was worth it. The right side hearing aid only needed cleaning, but the left side doesn't work and has to be sent for repair. I'll be without it 7-10 days.

While at Costco, I purchased a box of baby spinach and some blueberries.

That's been my day so far. Sunnie keeps me company while I'm on the computer, lazily stretched out on the back side of my computer screen.

Ciao for now. Travel Bug out.

Posted by TravelBug-Susan at 5:17 PM 3 comments:

For having lots of weekend hiking/walking plans, we ended up doing only one thing and it wasn't walking or hiking. Our moonlight hike at Eisenhower Park on Saturday evening was cancelled due to all the rain Friday and Saturday. We decided not to hike at Hill Country State Nature Preserve on Sunday morning due to the forecast for rain, the fact that I have nasty blisters* on the tops of both feet, and Bob was called in to work (as the office move that was supposed to happen on Saturday didn't, so he had to go in Sunday).

[*Blisters are from our Riverwalk - Museum Reach walk last Wednesday evening. I thought it would be okay to wear flip-flops on a four-mile walk because they're comfortable. Hah! Not so. The upper straps rubbed half-inch blisters into the tops of both feet. Ouch! I'm not doing that again.]

Sunday evening we planned to do a Volksmarch in Boerne (pronounced Bernie), Texas, followed by an outdoor band concert. As we drove to Boerne, the sky was black and threatening. We passed by the start for the Volksmarch because I don't like walking in downpours.

On to Plan B which we were going to do after the walk and band concert. The owner of the company that Bob most recently worked for bought a new property that he plans to develop into an event venue called Random. This weekend is his preview opening. The property is about four miles west of Boerne on I-10.

A major downpour had just passed through minutes before we arrived. In fact, it was still sprinkling as we parked the car. On the way to their place, we had to cross a creek. Well, what had been a creek was now a raging river from the aforementioned downpour.

I got out my camera to record the swollen creek. My camera would not turn on. I tried and tried. Bob said, "Did you remember to put the battery back in it?" Um, duh, nope I didn't, no battery. So no photographic evidence. I can tell you, however, the creek was flowing around the trees on the bank and almost to the bottom of the bridge deck. On the downriver side of the bridge the now-swollen creek dropped off and made a ten-foot roaring waterfall.

When we met Michael and Mary at Random, we told them about the creek. Shocked expressions ensued. They had to see this. All four of us walked down to look at it...so dramatic to view. Mary took lots of pics with her smartphone.

Back up at Random, Michael took visitors on a tour of the old house (parts of the house date back to 1840) on the property and told us his vision for a remodel. They plan to put in a wine-and-beer-tasting bar, have a small kitchen to make appetizers and light snacks, fill the rooms with small tables and chairs for people to sit, converse and enjoy the ambiance.

Outside is grassy acreage with which to work. Mary would like to schedule weddings that could be held on the beautiful grassy lawn. Picnic tables are set up around the property for outdoor eating, and big, spreading pecan trees offer shade. Ideas for use of their space include a remote-control car area, crafts barn, community events venue, possibly a petting zoo in a few years.

Their property is next to Boerne City Lake. After we spent time socializing at Random, Bob and I drove the road to Boerne City Lake and drove through the park. Even though a major downpour had passed through a couple of hours before, kids were swimming in the lake and people were out kayaking. The lake is quite large.

We then drove the rest of the road to its end. Along the way we saw herds of Axis deer. One stag was imposingly regal with an enormous set of antlers. Oh, for my camera! He was standing proudly on a hill surrounded by 30 deer, the sun was on him. He looked magnificent.

White-tailed deer also were in the area. On the side of the road, on the other side of a fence, we saw a doe with two very new fawns. They were so little. Adorable.

Today (Memorial Day), Bob is working at his new job. The companies that work in the oil fields don't take very many holidays. I think Bob said they get Christmas off!

In addition to the leak in the front of our 5th wheel in our closet, we also discovered a leak in the back near our rear windows. The carpet is soaked behind one of our recliners. I have a fan blowing on the carpet to dry it off. Now we have to find where the water incursion is occurring. It may be coming in around the window, or it could be coming in at a tear in our seal up at the back corner of our dining room slide.

Today is a quiet day for me. I am hanging out with the cats. Here are a few photos from the past week or so...

When Bob returned from work (no problems getting home), he took my camera and recorded his impressions of the flood near the RV park. Keep in mind the water has receded 8" at our RV site since I took photos earlier in the day.

The park manager and maintenance man retrieved our yellow tire stoppers (chocks) and put our spare propane tank at the site next door. It had floated off.

Bob also headed out on the Riverwalk extension at Roosevelt and found...

In the following photo, the irrigation pipe seen to the right of the path is usually down the riverbank to irrigate the lower portion of the bank. It floated up to its current position. 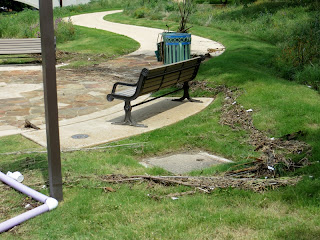 In the photo above, you can see debris from the high water mark. At the left top, you can see the top of the arch on the bridge. That's how high the water rose. 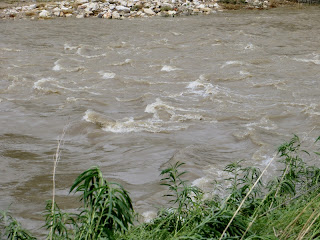 Here are photos he took of the dry section of the park too. The whole park was not flooded. 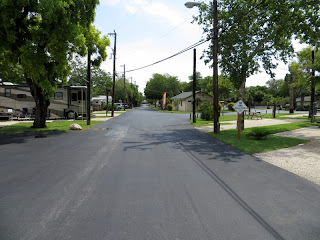 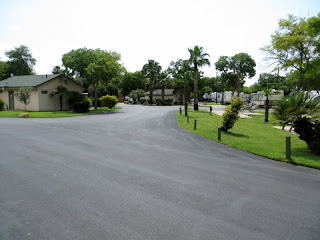