If you know us well, you know I don't walk in the rain. Period. Don't like it, never have. So I was highly skeptical this morning when I read the NOAA weather report proffering a 40% chance of thunderstorms, 50 mph wind gusts, and possible hail. I don't know what I was thinking when I told Bob I still wanted to go. I brought the umbrella and packed my camera, cell phone and car keys in plastic Ziploc sandwich bags. (Bob says I'm a good Girl Scout.)

Driving to the start point in downtown San Antonio, an ominous sky brooded over us. Black sky moodiness dared us to continue with our plans. The blue sucker hole drew us in, even though surrounding us through a 360-degree view were clouds in shades of black and grey.

After registering for the Volksmarch, we started our walk at 7:45 a.m. The temperature was pleasant and we walked at a good pace. As soon as we got to El Mercado, the sky started spitting at us, not enough to soak, just enough to let us know we better be prepared for the moody sky to shed some big crocodile tears.


My umbrella was up when rain, thunder and lightning descended upon us. The rain came down in earnest. We hurried to find cover and ended up under the awning of the WOAI 4 News building for about 45 minutes. When the rain let up, we continued our walk. You will see that raindrops falling on our heads were not our only challenge.


When cars and buses went by, they splashed up a wall of water. Thankfully, we were out of reach of the splashes.

A few more photos of our downtown jaunt... 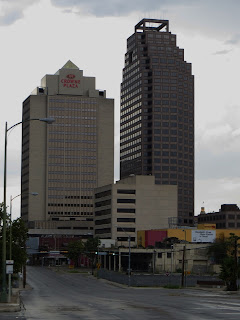 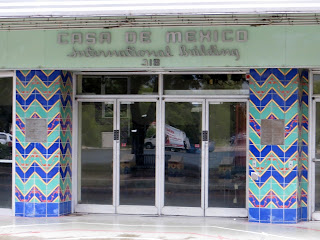 We finished up our walk in a damp state. Actually, Bob was pretty wet. He only had his baseball cap for protection from the rain. I shared the umbrella for a while, then he decided not to use it anymore.

Below is some more information on The Big Year birding competition. Bob found these when he searched for "the truth about The Big Year" on Google. We both enjoyed reading these two articles and thought you might enjoy them too.

Cornell Lab of Ornithology Round Robin: "Birds, Birders, and Birding in The Big Year: What We Noticed."

TravelBug out.
Posted by TravelBug-Susan at 10:30 PM 2 comments:

Our Saturday evening plans changed. We didn't go to see Missions baseball or the fireworks following the game. Instead, we headed out to Random event center for a live band and a relaxing evening in the country.

About an hour from our RV park is Boerne, Texas, a historic German town. Just west of Boerne is Boerne City Lake. Random Event Center is at 11 Upper Cibolo Creek Road on the way to the lake.

We arrived around 6:45 p.m., the band was scheduled to start at 7:00 p.m. Even though the temperature was 90+ degrees, being in the country felt comfortable. Seeing the acres of green grass instantly mellowed us from the hectic pace of the past week.

We ate appetizers from So-Frito food truck which had Cuban/Peruvian food. I tried the Carimanolas and Panamanian Tortillas, Bob had a Chicken Empanada served with a mango habanero sauce (the sauce was excellent, as was the carimanola). Then I had to try the Cuban Special: Ropa Vieja, black beans, rice and twice fried plantains. Great food. Nice, cold beer.

Will Owen Gage Trio played classic rock, blues, funk, and country. So nice to sit outside and listen to music. The evening was still quite warm so when people who had been sitting in front of the big fan left, we moved to that table. Ahhhh! Relief from heat and bugs.

Families came to Random with kids and dogs in tow. There was a water slide bouncy toy with a small pool at the bottom. The kids were having a blast! Up, down, up down, up, down; those kids will sleep good tonight!

Some people climbed over the berm separating Random from Boerne City Lake and went for a swim in the lake, then came back for the band.


We stayed until almost 10:00 p.m. but we needed to get up early to walk and it was an hour drive home. This was a very nice, relaxing evening outdoors and was much needed by two Type A people.

Posted by TravelBug-Susan at 10:20 PM No comments:

I was out the door early this morning for an AVA-sponsored Volksmarch. Because Texas is so hot at this time of year, it is de rigeur to walk or hike early. I signed in and started the walk at 7:30 a.m. The temperature was 79 degrees.

Since this is my go-to walk when walking alone, it was nice to have the sponsor's start/finish table with ice water provided. The walk today was set up to go in the opposite direction from the way I am used to walking so I saw the route from a different perspective. It took me one hour and 35 minutes to walk 10K (6.2 miles). Pretty good.

I took a few photos along the way...

Other than the walk, I have blogged, vacuumed, and done laundry. Next on today's agenda is dinner, followed by a Missions baseball game, fireworks, and some live music and beer, maybe dancing, at Random event center in Boerne, Texas.

Tomorrow, another early walk, then take the rest of the day off!!!!

TravelBug out.
Posted by TravelBug-Susan at 5:27 PM 3 comments: