As with any vacation it takes a couple of days to decompress and get back into the normal rhythm of life. Friday, I spent time organizing photos and unpacking, plus I wrote one blog.

Saturday, I was able to write three blogs. We took a quick drive out to Random and then drove back home.

Yesterday (Sunday), Bob wanted to go for a drive. We packed up some snacks and water and headed to Canyon Lake. We wanted to take a look at the U.S. Army Corps of Engineers campgrounds. Our route took us up I-35 north from San Antonio to FM 306 out of New Braunfels to Canyon Lake Dam.
From Overlook Park, we tried to drive through two Corps of Engineers campgrounds; however it wasn't to be. The lady was very unfriendly at the first campground's gate (first time we've had that experience). We were told no drive-throughs of the campground except Monday through Thursday. That doesn't work too well for us because we work in San Antonio during the week. So, scratch that idea.

We continued on FM306 to US 281 north and decided to check out Blanco State Park. What a lovely location along the Blanco River. When I went to show our Texas State Park pass to the ranger station, I found out it had expired in May. Oops. Immediately bought a new one because we love to go to Texas state parks!

Blanco State Park is known for its swimming holes and fishing. The river is stocked with trout and many people were enjoying the day fishing. Those that weren't fishing were swimming and picnicking. We spent a few minutes in the bird blind to see what fauna were around midday. 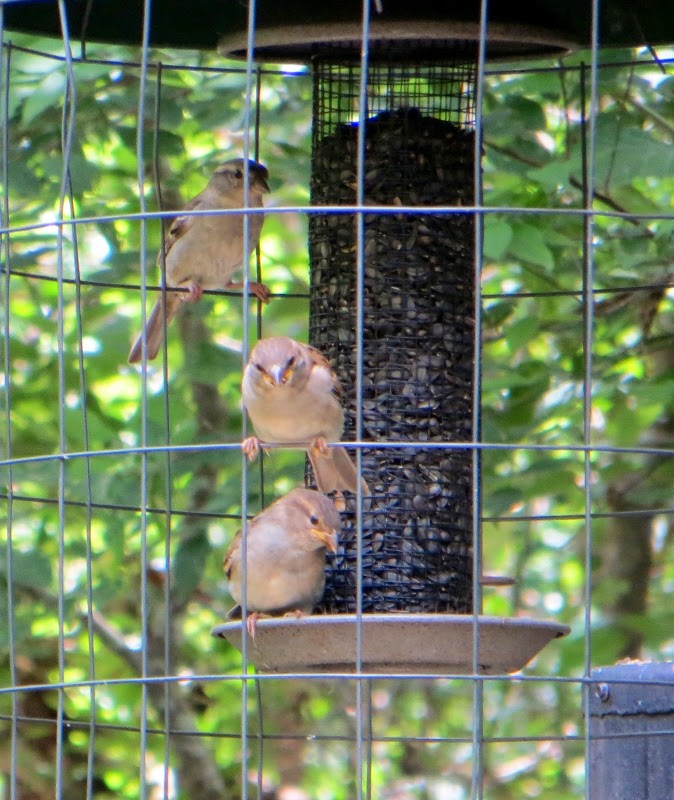 On our way home, we stopped at H-E-B for fresh peaches and visited the deli. I had a turkey croissant sandwich and Bob chose a salad.

We had fun exploring today and will probably return to Blanco State Park to swim. It wasn't nearly as crowded as some of the swimming holes we've been to. There were actually lots of parking spaces left.

Have a good week everyone.

Travel Bug out.
Posted by TravelBug-Susan at 5:04 PM 8 comments:

Driving through Roswell, NM, we laughed over all the references to aliens, pictures of little green men on hotel signage, and alien souvenir shops. We just had to take a rest break at the McDonald's shaped like a flying saucer. Unfortunately, McDonald's hung all their advertising on the part of the building that cuts under to look like a spaceship. Oh well, you get the idea.

On U.S. 285 north of Artesia, I saw a herd of antelope. What was interesting was a buck was separated from the rest of the herd and two large coyotes were facing off with the buck. We went by too fast to see what transpired, but nature was taking its course. There could have been other coyotes attacking the weaker parts of the herd, or maybe the buck was fighting off the only two coyotes around.

The town of Artesia, NM nixed our plans to go south to Ft. Stockton, Texas on U.S. 285. As we entered Artesia from the north heading south, Garmin insisted we make a U-turn and go on U.S. 62 toward Hobbs, NM. As if to emphasize that, U.S. 285 had a sign stating, "Road Closed Ahead." Upon doing a U-turn, I noticed that all the side streets said "Road Closed" as well. What the??? No explanation was given about why the roads were closed. Everyone was re-routed around Artesia.

We ended up on U.S. 62 east through Hobbs, NM to Seminole, TX, then south on U.S. 385 through Odessa and Crane, Texas, onto a Farm-to-Market Rd #305 to I-10. Our route took us through the oil-rich Permian Basin. Old-fashioned oil wells were everywhere! New fracking rigs were being erected as well. We saw man camps for the oil field workers, towns revived by oil money and the workers who use the services, as well as beautiful new homes in a number of the towns we passed through. I, for one, am happy the U.S. has tapped the massive reserves of oil in our country. It would be great if we could end our dependence on Middle Eastern oil.

Other alternative energy sources we saw on our trip were many wind farms in the barren expanses of Oregon, Idaho, Utah, New Mexico and Texas. We thought with all the sun in Arizona, Utah, and New Mexico that we would see more solar panels on homes and more solar farms, but we didn't see very many.

The drive from Santa Fe, NM to San Antonio, TX took us 12-1/2 hours. We arrived at Susan M.'s house about 8:30 p.m. Central Time. Bob picked me up. Susan and I said our good-byes and we headed back to the 5th wheel.

Mission accomplished. We had a great time doing Volksmarches in the Columbia River Gorge in Oregon along with six state capital walks, and the 12K Silver Falls Trail of Ten Falls walk.

Life as we know it is back to normal. Travel Bug out.

Susan had never been to Moab before so she walked to window shop along the main street on the way to Jailhouse Cafe. Yes, the building where we had breakfast was once a jailhouse.

I drove and met her at the cafe at 7 am. We each enjoyed a glass of freshly squeezed orange juice. Susan said it was the most expensive breakfast she ever had. She ordered a breakfast skillet with eggs, potatoes, cheese and a side of their thick-cut bacon. I had scrambled eggs, potatoes and toast ($10.49) with a side of bacon ($3.49). I couldn't finish all my bacon, so gave the rest to Susan. She couldn't finish her breakfast, but did take her left-over bacon. The bacon came in handy the next day when she put it on her tuna sandwich.

Arches National Park: so near and yet so far. We didn't set foot in the park because we had a schedule to keep. Heading south, we made a ten-minute stop at Wilson Arch on the side of the highway.
From here, we drove and drove and drove toward Santa Fe with a scheduled arrival time well before 5:00 p.m. (which is when the Visitor Center -- our walk start point -- closed). We made it to town at 3:00 p.m., checked in for our walk at the Visitor Center, then looked for a nursery Susan had been to before. She was hoping to find a small plant or two to take home for her garden. We found where the nursery had been, but it was closed. All their plants are now mail order. She was disappointed.

Check-in at our motel was next. The historic Silver Saddle Motel has themed rooms; ours was the Calamity Jane room. 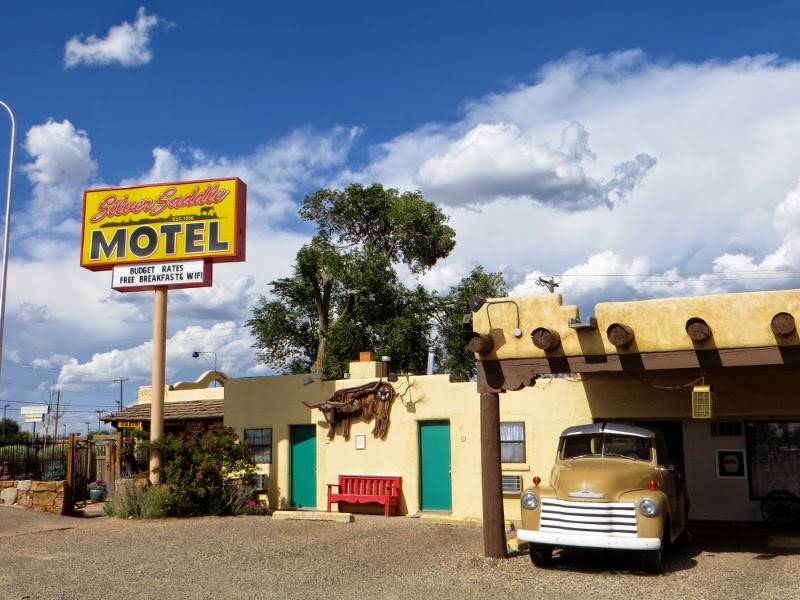 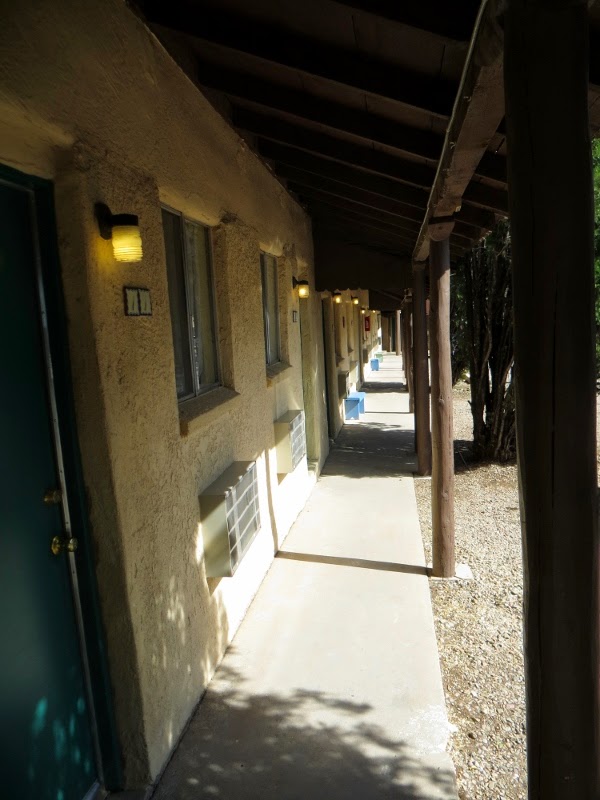 The room was much smaller than we thought it would be with only a double bed. (Susan had planned ahead and had an air mattress and sheets with her. She set it up on the floor by the door to the room when it was time for bed.)

Next door was Jackalope Furniture. Susan wanted to take a look around. They had furniture, lawn decorations, old doors, and garden pots. I had fun walking around taking photos.

After about ten minutes I had a text from Susan asking where was I. She was waiting at the car.

We headed to the Visitor Center to start our Santa Fe Capital Adventure 5K Volkswalk. Our very first stop was the New Mexico Capitol Building, also known as The Roundhouse.

We crossed the street to the Bataan Veteran's Memorial with its eternal flame.

We then passed the Hotel Loretto and Loretto Chapel. Unfortunately, the Loretto Chapel had closed a few minutes earlier so we didn't get to go inside to see the "miraculous" staircase.

Below is San Francisco St. where Santa Fe's Plaza is located. The historic plaza was the end of the 1,800-mile Camino Real (Royal Road) from Mexico City, and the end of the 800-mile Santa Fe Trail from Missouri. It was also the beginning of the 1,120-mile Old Spanish Trail terminating at the Los Angeles Plaza. 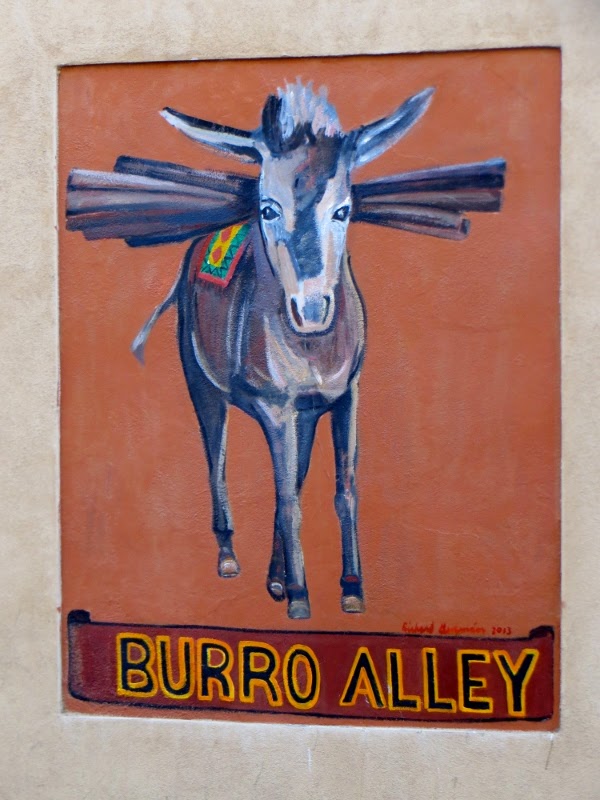 In former times, firewood vendors would use burros to haul firewood to this alley where buyers would come to purchase the wood. Across the street from the burro sculpture is a plaque about Billy the Kid. 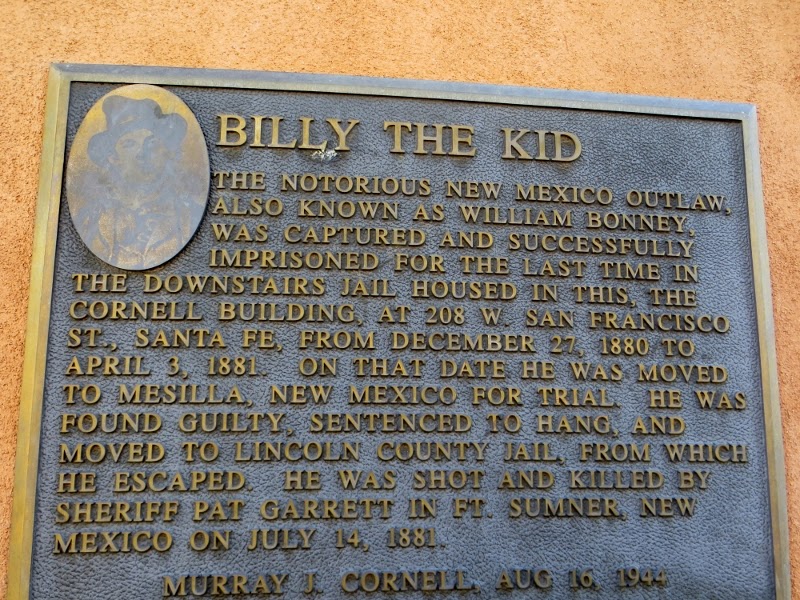 With Burro Alley behind us, we proceeded to Peralta Park, passing the statue of Don Pedro de Peralta, the founder of Santa Fe.

Down the block we entered the grounds of the Greek Revival style U.S. Federal Courthouse.

You never know what you'll find when walking. I found a business with my blog name (except for the Susan part).

After a few more blocks and some confusion about the Volksmarch directions, we found The Cathedral Basilica of St. Francis of Assisi.

From here, we headed back to our start point at the Visitor's Center. I took a few more photos on the way back... 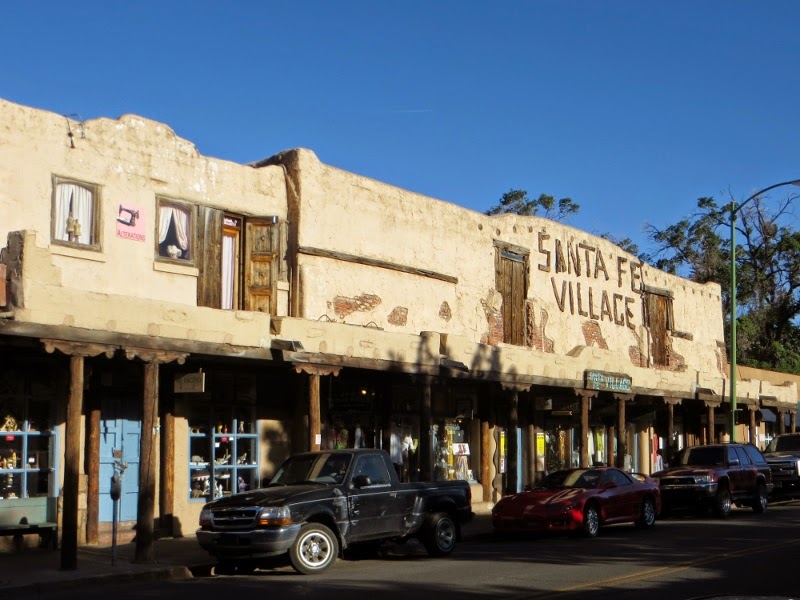 Below is the 400-year-old San Miguel Church, the oldest church in the U.S. 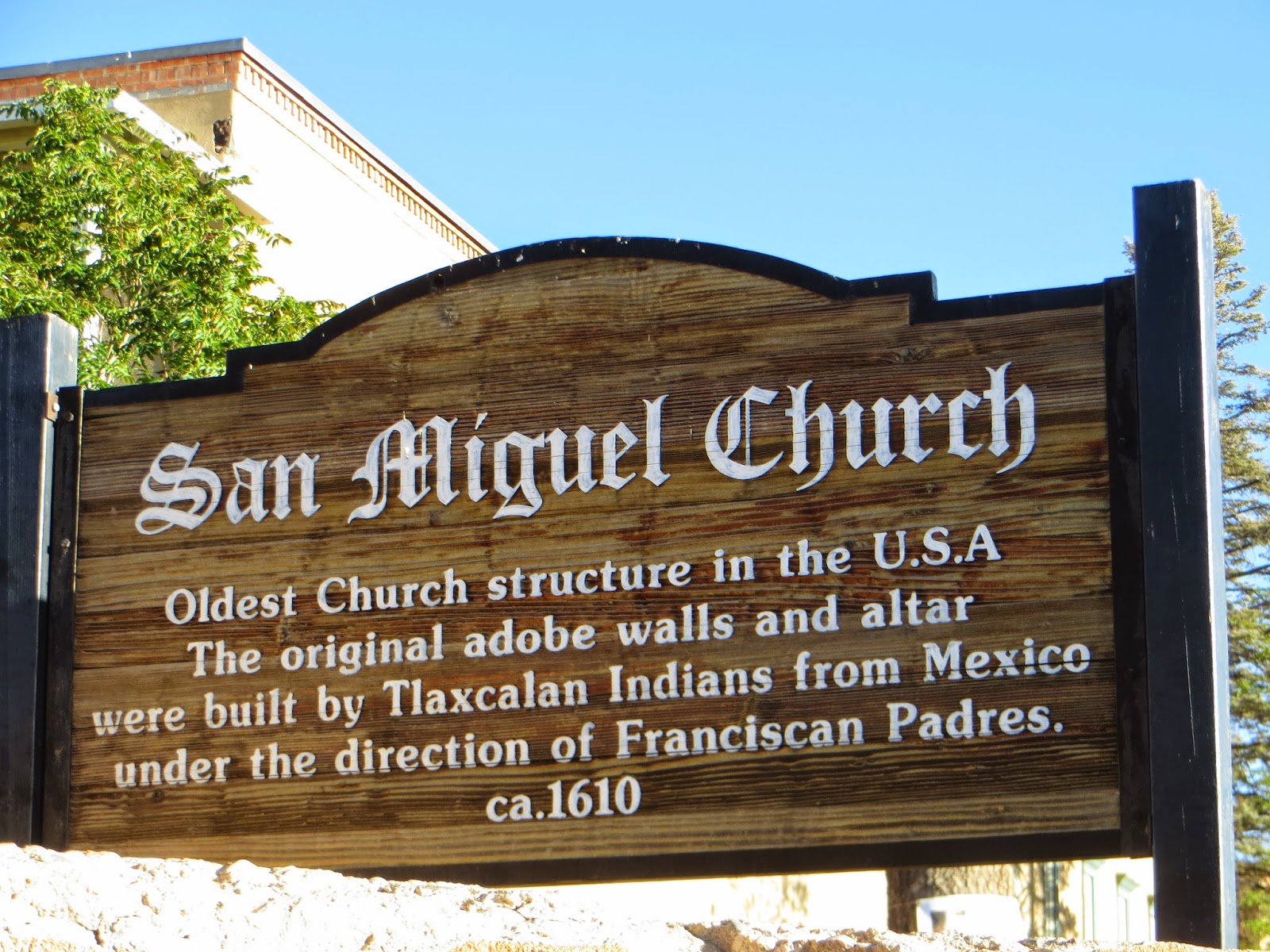 We finished our walk 1/2 block later at the Santa Fe Visitor's Center. Our Volksmarches of state capitals were over for this trip. The only capital we didn't walk was Salem, Oregon. Each of us plan to be back in Oregon at some point; we can do our Salem walks then.

After freshening up at the motel, we walked two very long blocks to Tortilla Flats Mexican restaurant to have dinner and celebrate all the walks we did. Susan M. had a Classic Margarita and quesadilla; I had a Santa Fe Sunset and guacamole salad.

Having never heard of a guacamole salad, I thought I'd give it a try. Here's what it looks like...

We walked back to the hotel after sunset which made the air very nice. Each of us relaxed and got ready for bed, slept, and were up at 6 a.m., on the road by 6:50 a.m.