Friday, November 15 (continued): Our Houston Street Historic Walk led by David L. Peche started in the shadow of the new Frost Bank Tower in downtown San Antonio. However, our walk today will focus only on the buildings that were here at the time of the 1919 OST Convention.

David Peche loves the history of San Antonio. He has published two books of historical photographs: "Downtown San Antonio," and "San Antonio's Historic Hotels."
Gunter Hotel was one of the early hotels on the Old Spanish Trail to cater to travelers. Below you can see a photo of a keepsake medallion that advertised "Gunter Girls." 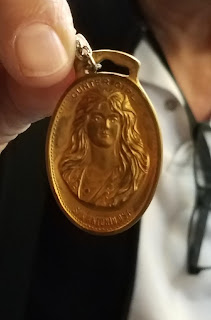 Along Houston Street are historical markers. Below, members of our group read the history on one of the markers.

Below is the stunning Texas Theatre. It was not built until 1926, so it was not in San Antonio during the 1919 OST Convention. The Texas Theatre was a grand building in its heyday; however, all that is left of the building is its facade. The rest was torn down by developers after a long legal battle with preservationists. This was quite a loss for San Antonio when you consider the outstanding restoration done on The Majestic Theatre. Bob and I had to cut our walking tour short because Bob had a doctor's appointment. On our walk back to El Tropicano we had a nice view of the tile mural on the side of the building.
Saturday, November 16, Bob had things to do so I went with the OST to Boerne and Comfort, Texas. A number of people took a paid, guided van tour along the Old Spanish Trail, some drove in a 50-mile motorcade from San Antonio to our destinations, and some of us drove independently.

Our first stop was the Kendall County Courthouse and Historic Jail where we had presentations in a courtroom by members of the Kendall County Historical Commission and Genealogical Society, followed by a brief tour of the courthouse.
The tour of this jail was unique in that last week they had a community haunted house in here. There are some props remaining. In the first photo below, you can see the thick walls and curved metal ceiling. The ceiling is designed this way because an arch shape can hold a lot more weight than a straight ceiling or wall. A strong ceiling is needed because the rock blocks which make up the jail are VERY heavy. 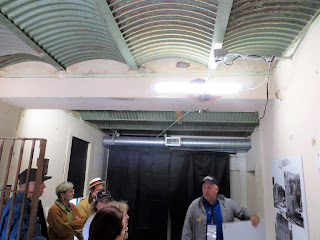 We had photo opportunities when the owners of the cars hammed it up. 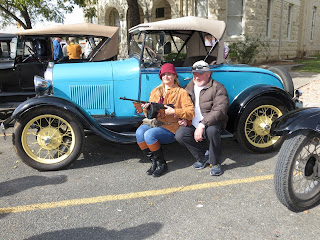 When our tours were finished, a buffet lunch was provided by Kendall County businesses, organizations, and individuals. Sandwiches, fruit, chips, veggies, and cookies were set up in the historic county courthouse.

After lunch, we headed off to Comfort, Texas, for a welcome at the Comfort Heritage Foundation. Then we had free time to explore the town of Comfort, visit a private museum, and hear history at the Treue der Union monument.

After the museum, I caught the shuttle to the Treue der Union Monument. At the monument, Mike and Anne Stewart told us the history of Union soldiers who were trying to cross South Texas to join the Union forces in Mexico. However, Texas Confederate forces tracked them down and killed them all. You can read all the historic markers for the full story. The Treue der Union Monument is one of the few places in the U.S. where the U.S. flag is flown at half-staff 24/7.

That concluded our OST weekend.

On Sunday, November 17, Bob went with me to Six Flags Fiesta Texas to start my birthday celebration week. I'm a Season Pass holder and a friend could enter free with me today. Bob is a true trooper for hitting Six Flags with me. He doesn't care for rollercoasters at all. But, for my birthday, he accompanied me around the park and waited while I rode as many coasters as I could. 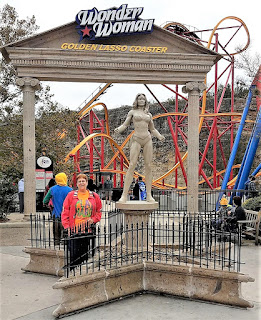 We started the day at the Wonder Woman Golden Lasso Coaster. Because it was right after the park opened and the ride is in the back of the park, there was almost no line when I got there. I was able to ride five times in a row and three of those times I didn't even have to get off the coaster because there was no line. I sat in the front seat three times in a row. Awesome! Bob was prepared to sit and wait. He had his cell phone and listened to podcasts.

Next, I went to Batman: the Ride coaster and went on it twice in a row. No line there either. Then Bob and I went to the SkyScreamer swings. We waited in line, got on the swings. Waited. Then the ride went down and we had to exit.


Next door was the Superman Krypton Coaster. I headed into that line only to be told that that roller coaster was also currently out of order.

I wanted to go on a ride with Bob, so we got on Hustler which are spinning cars shaped like billiard balls. The car we got in didn't spin very well. Usually, we can get them going really fast.  Bob also went on the carousel, pirate ride, and the park train.

It was a really fun day.

It looks like it will take me one more blog to finish up what I originally wanted to accomplish in one blog. Thanks for sticking with me.

To be continued in Part 3.


Posted by TravelBug-Susan at 11:00 PM No comments:

For the next three days, Bob and I attended the Old Spanish Trail (OST) Centennial Celebration with the centennial reenactment of the 1919 OST Convention. These events took place in San Antonio, Boerne, and Comfort, Texas. All the events and meals were free except the opening banquet, which Bob and I did not attend.

On Thursday, November 14, a cold, windy, rainy day, we participated in a Seguin Street Historic Walk. There was nothing fancy about this walk or the neighborhood, but we learned what life was like back in 1918-1919 when the OST was built. The homes were modest along Seguin Street would have been on the outskirts of the city. There was a Paris Cafe, a small motor hotel, the railroad, and some industry.

Charlotte Kahl, Executive Director of the Old Spanish Trail Centennial Celebration Association was our tour guide. She made a commanding entrance dressed in a full-length coat, scarf, and steampunk glasses. Here are some photos and narrative about our walk.

Back in 1918 and 1919, motorized vehicles were being used in war for the first time. When the war was over, a warehouse was needed to store the vehicles that had been used in the war. The warehouses below were just a few blocks from the U.S. Army's Fort Sam Houston and served the purpose well.

Keep in mind that this area was on the eastern outskirts of town. People driving through on the OST needed a place to stay and places to eat. They had just driven through miles of open country.
The historic building below was the Frito Lay cottonseed oil manufacturing plant. The railroad had tracks coming right up to this building so they could ship their oil to the potato chip-making plants. To this day, cotton fibers are still found in the rafters of this building.

Below was a business that sold garden goods. It looks innocuous enough, but they used to get in large bags of DDT poison and on the side patio of the building, they would transfer the DDT to smaller bags for sale. DDT is a highly toxic powder. The winds would blow the DDT powder all over this area called Rattlesnake Hill. There are still traces of it in the soil here. It has a very long half-life.
The OST started out in St. Augustine, Florida. Below, you can see the entry gates to Fort Sam Houston. A number of years ago, the fort wanted to put up new entry gates and asked for design ideas. The Old Spanish Trail Centennial Celebration Association suggested that since the fort is on the OST, it would be appropriate to put up gateposts that match the ones in St. Augustine, Florida. That is what they ended up doing.

This viewpoint of the gates was the end of our Seguin Street Historic Walk. Most of us walked the mile back to our cars, although there was a vehicle available to pick people up and drive them back if they needed it.

After we picked up our name tags, we helped ourselves to the free buffet breakfast. It was wonderful. They had biscuits and gravy, bacon, scrambled eggs, pastries, coffee, and fresh fruit.


At 8:30 a.m., we had our first speaker who talked about the kinds of businesses you would find along the OST. People were doing leisure travel over long distances now so there would be curio stands, motels, cafes, and gas stations. Sometimes people would camp in tents in schoolyards or on farms. 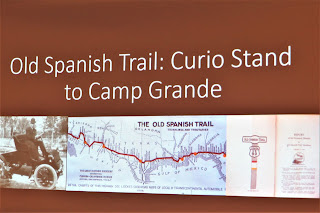 Bob and I thought our next speaker, John S. Blades was especially interesting. The topic was "Uvalde Asphalt Past/Present." His family goes way back in Texas history and owned a large amount of land. Cattle raising was their livelihood until they started noticing that rock the cattle trampled would break up and the more they trampled it, the harder it got! Some smart figuring on the part of the Blades family created some of the hardest asphalt roads in the nation. On their property was a huge deposit of Uvalde asphalt. The oil oozed right out of the rocks. Fascinating! 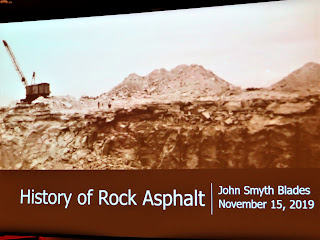 Next up was Paul Kahl, Charlotte's son. He has become an expert on concrete. You see, concrete being used in Europe was much harder than the concrete in the United States. Immigrants from Italy, John Pianta (who was chief plasterer on the Texas capitol) and his son Hannibal Pianta, came up with a technique for making "cast stone." He had a "recipe" for "cast stone" that changed how building embellishments like columns and decorations were made. In the distant past, building decorations were chiseled out of stone. Using concrete from molds made making the building decorations something that could be done faster and still maintain the beauty of the building.
.
Our other two speakers this morning were Melba Montoya who spoke on "Steps to Creating a Museum," and Keli Rylance whose talk was titled "El Dorado: OST in Texas."
Charlotte Kahl took a few minutes to thank Barbara Hall, her co-chair, for all the work she put into the event. The accolades were well deserved for BOTH Charlotte Kahl and Barbara.

It was lunchtime and a great sandwich buffet feast was set up in our meeting room. After lunch, we were able to peruse about 15 booths that had been set up showcasing everything from cities along the OST to artists, AVA: America's Walking Club (who have walks along parts of the OST), museums, and other points of interest.

I will continue this blog in Part 2 where we'll take a walking tour on Historic Houston Street in San Antonio.
Posted by TravelBug-Susan at 11:30 PM No comments: