...An unintended hitchhiker, but a hitchhiker nevertheless. As we were driving along a freeway access road, whoosh, a bird flew directly in front of the car. Oh, no! Bob was driving and I had visions of a dead bird on our grille.

When we reached the Camping World parking lot we headed into the store to find out about returning our outside surge protector. When we headed back out to the car, Bob said, "Look," as he pointed just above the front bumper. There, sitting on a little ledge between the bumper and the inside grille, was a beautiful young mockingbird, the state bird of Texas. It was alive.

We tried to shoo it away with our hands, but it jumped up higher behind the front grille. I tried to coax it out with a long pole that I stuck between the inside radiator grille and the outside decorative grille. Finally, we gave up and decided to let the bird stay there. It was protected from 70 mph freeway speeds behind part of the front of the car (no holes there to let air blast through).

Our destination was Pecan Park Campground in San Marcos, TX to meet friends Peri and Jim of Tales from the Camping House. By the time we arrived at their site, the bird was gone. We figure it must have jumped out at one of our stops along the way. Just as well. I don't know what we would have done with a mockingbird living in our car.

At Jim and Peri's 5er we sat chatting before we made our way to Lockhart, Texas, in Caldwell County, the Barbecue Capital of Texas.


Our destination in Lockhart was one of the four barbecue markets (AKA restaurants).  Peri and Jim chose Kreuz (pronounced "Krites") Market for lunch today.

The way you order at Kreuz was a new experience for us. First you stand in line to place your meat order from the "pit" area. The "pit" is the room where all the barbecuing, cutting and weighing is done. (Zowie! Is that room smokey!) Choices of meat ranged from shoulder clod to ribs to turkey to chicken to brisket to pork to sausage. Each type of meat had its own per-pound pricing which was paid for in the pit room.


This particular barbecue place does not put barbecue sauce on the meat, saying they're not trying to hide anything. Don't ask for barbecue sauce because it offends them. The meat is moist and tender. You can pull it apart and eat it with your hands. Once you have your meat, you make your way into the dining room where you get in line again to purchase your sides, drinks and desserts. I found a table for the four of us while the others went to buy their sides/drinks. We had a great meal and were pretty full at the end of it.

From the restaurant, Jim drove us around the town of Lockhart where he showed us Smitty's Market, Black's Barbecue and Chisholm Trail Barbecue restaurants...all had lines out the door. We also drove past Caldwell County Historical Museum (formerly a jail) which is a great example of the Norman castellated style of architecture. (In other words it is built like a castle.)

From Lockhart, we drove 13 miles back to Pecan Park. We nestled into Jim and Peri's 5th wheel (with fireplace heater!) where we taught them how to play pinochle. Bob and I were impressed with how quickly they learned the game. (It can be a bit tricky in bidding and strategy.) As the games progressed, we had some really horrible hands, so we did a lot of re-dealing.

During the afternoon, we snacked on chips, hummus, pretzel chips, praline nuts, smoked turkey, mixed nuts and pepper jack cheese. When the Alamo Bowl game came on TV, we moved the table into the living room to play cards and watch football. Jim and Peri wanted Texas to win. Bob and I wanted Oregon State to win. It looked good for Oregon State through the whole game until the very end. Boo!

Anyway we had a very fun day and capped it off with pumpkin pie and whipped cream. We didn't get home until around 11:00 p.m.

Jim and Peri are invited to San Antonio to do a 10K Volksmarch with us on Saturday, Jan. 5. Actually, we plan to do two 10K Volksmarches that day, so Jim and Peri can meet us after we finish the first one. Then we are inviting them to our 5er to play pinochle and Sequence. We'll see if there are any good games on TV that day.

(Note: I skipped blogging on Friday because it was typical chore day--vacuuming, shopping, laundry. Now you know.)

Today was a quiet day for me. I made pumpkin pancakes with cinnamon applesauce, fried eggs and turkey bacon for breakfast. Bob went to Gold's Gym to play basketball and relax in their indoor hot tub. I researched the cabins on site at our RV park for my Mom's and sister's visit in late March. I am also looking into booking their airfare. That's about it.

Posted by TravelBug-Susan at 8:23 PM 6 comments:

This morning Bob took care of a few 5th wheel chores. When we moved Sunday, we did not get the trailer level. Today he hooked up the truck and leveled us out. Now the cupboards don't whack us in the head and the refrigerator door stopped swinging its full 180s degrees every time we open it. He also refilled our propane tanks and emptied the black tank. I'm so happy he takes care of those chores.

Today I set off to meet Catherine and JoBeth of R-V Crazy Travel Journal at La Madeleine French Country Cafe near the Witte Museum in San Antonio. We fueled up with a good lunch to get us through a few hours in the museum. The dessert case had some mighty good looking cakes and tarts. We decided to return for dessert after the museum.

JoBeth and Catherine have been to the museum before, although they had never been to the South Texas Heritage Center. We started there.

As you enter the South Texas Heritage Center, a "tejano" statue welcomes you. It looks like he's talking--mouth moves, eyes move, throat moves. Turns out they're projecting the facial expressions from an overhead camera onto his face. It's a lot of fun to watch people's expressions as they come in the door and see him "talking."

In one of the classrooms, we watched an actress portraying life in 19th century Texas. She explained how she would prepare horns (boiling, cleaning out marrow and polishing) for a famous longhorn furniture maker. His furniture was so unique he sold pieces to the rich and famous, including Queen Victoria.

The upstairs exhibits covered topics such as how to balance a load on a donkey, branding, what you would find in a general store, history of the Comanches, stories of the ranch life, how to find oil, Farm-to-Market roads, the clothes, weapons and equipment used by cowboys, Texas rangers, sheriffs, and much more. 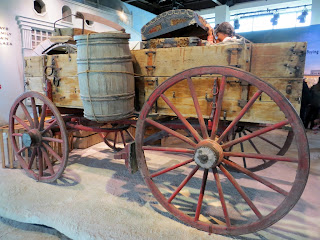 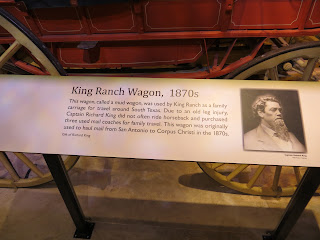 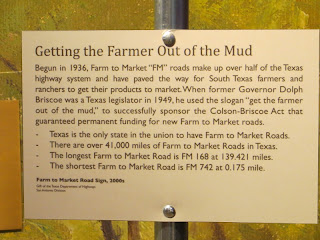 From the South Texas Heritage Center, we returned to the main museum building. In a brief recap, we saw Texas birds and wild animals, Texas Performers Under the Bigtop, Threads of South America: 2,000 Years of Textiles, and a small display on mummies (not "Mummies of the World: The Exhibition" which cost an additional $12).


We reached our museum tolerance level for the day and headed back to La Madeleine for dessert, talked about previous jobs and future plans. JoBeth and Catherine headed off to take care of Grace and I headed back to the 5er.

The day was enjoyable. It's fun meeting other bloggers and getting to know them. Thanks Catherine and JoBeth for the interesting time. Let's do it again.

Bob and I hunkered down in the nice warm trailer as it's cold again tonight. 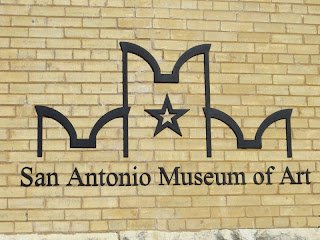 As I was checking out the calendar for the San Antonio Museum of Art a few days ago, I noticed on December 26, "Free Day." Could it be? Free all day? Yes, that's exactly what it meant.

Bob went to work and I went to the museum. The art started in the parking lot with a quote made from old signs. 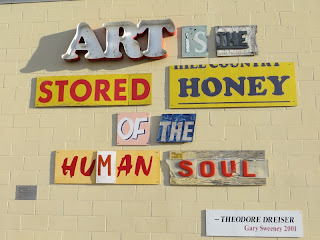 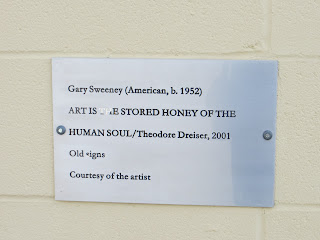 The museum of art used to be the Lone Star Brewing Company, founded in1884, because of its proximity to the San Antonio River. In the early 1900s, the brewery was one of the largest in the state, but it didn't survive Prohibition. The buildings did not fare well over the years.

A group of community leaders and museum officials liked the old buildings' distinctive architecture and dramatic internal spaces. By 1981, the old brewery reopened as the San Antonio Museum of Art.


The special exhibit through February 17 is: 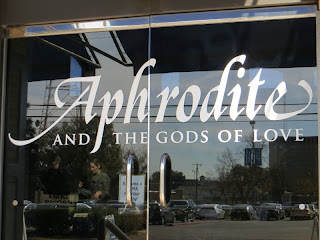 Upon entering the museum I was asked to provide my zip code and was handed a large map. On my way to the Aphrodite exhibit, I passed under a beautiful installation of Chihuly glass.

Because the Aphrodite collection is not part of the museum's regular collections, I could not take photos. Here is a description of the collection from the San Antonio Museum of Art website:


Known today as the goddess of love and beauty, Aphrodite, or Venus to the Romans, was one of the most powerful Greek divinities and a favorite subject in ancient art. This groundbreaking exhibition reveals this most popular ancient goddess in her roles as instigator of sexual desire, patroness of brides, seafarers and warriors, agent of political harmony, adulterous seductress, and mother to mischievous Eros. The exhibition features 125 statues, vases, terracotta and bronze figures, mirrors and jewelry from the Museum of Fine Arts, Boston's world-renowned Greek and Roman collection together with seven breathtaking works from the Museo Archeologico Nazionale in Naples.

The myth of the Judgment of Paris is told in an explanatory panel. Three goddesses: Hera (Juno), Athena (Minerva) and Aphrodite (Venus) all claimed to be the most beautiful. To settle the dispute all three were led by Hermes to the mortal shepherd prince Paris--considered to be a fair judge--who would decide which of the three would win the golden apple inscribed "to the fairest." All three goddesses bribed Paris. Hera told Paris she would make him the king of all men. Athena promised victory in war. Aphrodite promised Helen, wife of Menelaus. Paris chose the bribe of Helen from Aphrodite and she won the competition. Helen was taken from Menelaus of Lacedaemon to Troy where Paris married her. This starts the Trojan war.

I didn't think when I went to the art museum today I would learn Greek and Roman mythology. You just never know what you will find. 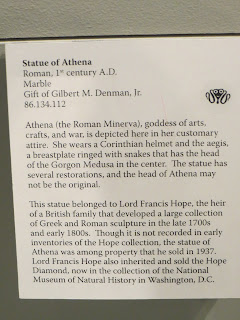 The next set of photos are Islamic Art...The second photo is an interior door from Iran (circa 1800) done in the Qajar style.

The Art of Oceania. 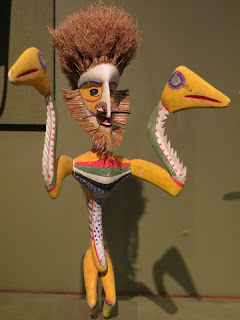 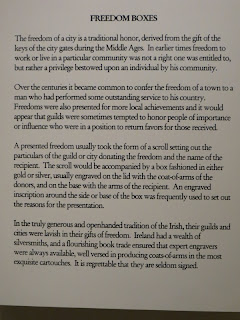 The Art of Asia. 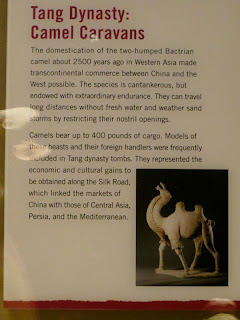 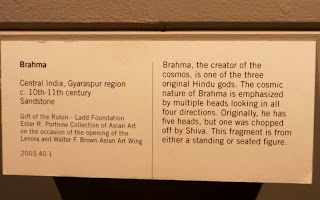 Having recently visited the missions above, I was particularly interested in the four mission paintings. These were painted at a time when the missions were in use, before they had to be restored. I enjoyed seeing what they looked like originally.


That concludes this short tour of the San Antonio Museum of Art.

I met Bob at the 5er for left-over spaghetti before we headed out the Spurs-Raptors NBA game at the AT&T Center. The game tonight was not nearly as exciting as the game on Sunday night. The cheerleaders only came out once and there wasn't the same energy in the building--the players or the crowd. In the end, the Spurs won by about 20.

We headed back to the 5er and settled in for the cold night. In fact, it has been very cold the last few nights and I've been doing quite a bit of cooking, so we used up two tanks of propane. Luckily we had a spare to get us through night (28 degrees!).