When we exited the museum at the Arch, we were refreshed from spending about an hour in air-conditioned comfort, and our tummies were satisfied after having lunch. Outside, it was hot and a bit humid. We stayed in the shade as we walked.

As we headed back downtown from Gateway Arch National Park, I spotted a small historical marker that looked like it had seen batter days. It's titled, "Battle of St. Louis: Fort San Carlos."  I have a photo of it, but it is hard to read. Here's what it says:

"In the late 18th century, the western world was at war. France and their ally Spain were at war with Britain and American colonists along the North Atlantic were fighting a bitter war for their independence. In 1780 The Revolution in the east migrated west to the small French-born, Spanish-owned trading post along the Mississippi River, Saint Louis.

"Fearing an attack from the English, Spanish officials began to build a series of stone towers, manned with weapons, along the banks of the Mississippi, facing east. The central tower, Fort San Carlos, was located near this spot.

"On May 26, 1780, the British with several hundred of their Native American allies, launched a massive attack on St. Louis.

"The small garrison of Spanish soldiers and the predominantly French inhabitants of the community were able to repulse the attack. By the end of the day, the British and their Native American allies retreated to the north.

"The fort and Saint Louis survived."

This was the westernmost battle of the American Revolution.

Our next stop was St. Louis Ballpark Village, home of Cardinals Nation. The battle that was fought here circa 2005 was the controversy about tearing down Busch Stadium, which had been home to the Cardinals since 1966. But tear it down they did. Guess what the new stadium is called? New Busch Stadium. No, that wasn't a trick question. 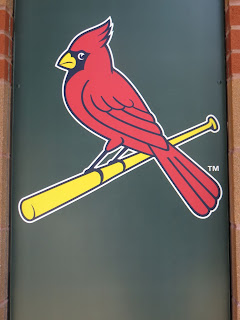 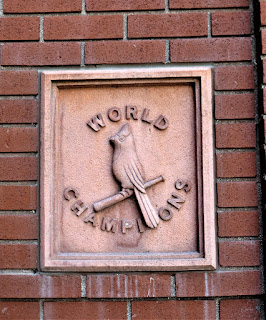 I enjoyed taking photos of the action-shot sculptures outside the stadium. They're awesome!


The Old Courthouse: Our "Sights and Historic Highlights" sheet that came with the walk has a great description of this building. (Original 1820s courthouse was expanded in 1839-1845) - The building sits on the site of the beginning of the first overland trail which led wagon trains on their westward journey. The cast-iron dome, designed by William Rumbold, replaced a smaller cupola 1860-1864.

Slave auctions were held on the steps of the courthouse until 1861 when abolitionists obstructed potential buyers from attending sales. This is the site of the famous Dred Scott trials, events that influenced the start of the Civil War. Scott and his wife sued for freedom based on "free status" they had been granted while living with their owner/employer for a time in free territory. Upon return to Missouri, a slave state, with their former owner, they were again classified as slaves.

Across North Broadway from The Old Courthouse is Kiener Plaza Park. This park is THE place to take photos of The Old Courthouse framed by the Gateway Arch. I had so much fun with photography here. Everybody got way ahead of me. Then I received a phone call which took a bit longer. When I turned around, everyone was gone. I couldn't see them anywhere. Then, DeAnne came back looking for me. She got a good shot of me coming out of the park.
The CityGarden Sculpture Park was fun. When we first walked into the park, we thought we heard beautiful wind chimes. It turns out, there is a low walled-off area where some people were making music that sounded like wind chimes by stepping on something on the ground. I didn't go over to investigate, but DeAnne did.
Bob got inside someone's head and then he zipped up the landscape! Talented guy!

The neo-classical Civil Courts Building below was completed in 1929. It is 13 floors above ground. It is intended to resemble the Mausoleum at Halicarnassus (one of the Seven Wonders of the Ancient World). Some of the design elements they kept include the Ionic colonnade and the Egyptian Revival stepped pyramid at the top of the building.

The Civil Courts Building is topped by two chrome sphinxes back to back, each bearing a fleur-de-lis on its chest.

We also passed by the United States Court House and Custom House. I took some cool photos of a planter, too, but I can't remember which building it was near. The Court and Custom House was built from 1933-1935 using U.S. Treasury Department Funds. The building has 1/2 Egyptian-style columns in a giant order covering five floors. Eagles in an ancient Assyrian manner are on the corners.

Below is the Thomas F. Eagleton Federal Courthouse. This 29-story, 1,037,000 square foot addition to the St. Louis skyline is the second tallest court/judicial building in the world. Only the Richard J. Daily Center in Chicago is taller. The unique architecture is considered a prototype for all future federal court buildings. The stainless-steel domed roof complements The Arch by repeating the same curve as that of the Arch.

We finally made it back to Union Station Train Shed Entertainment Area. This place really has it going on! There's a new aquarium, a carousel, the St. Louis Wheel Ferris wheel, mini-golf, and a pond with a light, music, and fire show. There's also a Landry's Seafood Restaurant, and St. Louis Station Soda Fountain.

Ice cream was sounding pretty good right about now. We walked up to the entrance of the St. Louis Union Station Soda Fountain thinking we would go to the ice cream counter and get ice cream cones. Not so fast Buck-o. We were stopped at the door by a hostess. In order to get ice cream, we had to get a table. The wait was an hour and ten minutes. Umm...no! We left and decided to look for ice cream elsewhere. The hostess told us there wasn't anywhere else to get ice cream nearby.
DeAnne and I took a ride on the carousel. I get on them whenever I can! That was fun. The guys just sat there, watched us, and took photos. DeAnne and I took photos of each other up close and personal.

There is a unique feature on the second floor of the Union Station Hotel, right at the top of the stairs. It is called a Whispering Arch. DeAnne pointed it out to us. She told me to stand on one side of the arch and had Bob stand on the other side. Then she had Bob whisper to me from across the room. I could hear everything he said. The sound was transported across the arch!

And with that, we all walked back to the start point, hopped in our cars, and headed home. All of us were exhausted from a 15k walk, the heat, and the seven hours it took to see all that. (And wait for me to take photos. Thanks, guys!)
I think everyone took a nap when they got home. It was a great day and we learned so much about St. Louis. I certainly didn't expect to be so immersed in the Westward Expansion, Lewis & Clark, the Dred Scott trial, and so much cool architecture. This city is definitely worth a return visit.
Thanks for sticking around to read all that. Whew! I am drained and it is bedtime. I'll be picking up my walking partner at 5:45 a.m. tomorrow to walk before it gets too hot in San Antonio.
Good night, all.
Posted by TravelBug-Susan at 11:30 PM 2 comments: