This morning Susan and I met at Leon Creek Greenway trailhead for our 10k walk in the shade. Once again, San Antonio is hot, still, and humid at 7 am.

As we drove into the parking for the trailhead, a herd of about eight deer popped out from behind a berm next to Walmart and headed along the access road to the trail. One fawn leapt right in front of Susan's car...I saw it in my rear-view mirror. We were going slow enough that the deer weren't a problem. In fact, they're very graceful to watch.

Today was a good wildlife watching day. In addition to the herd of deer we saw driving in, we spotted another deer across the dry creek bed heading up the bank, and we saw three bunnies.

Even though the trail was shaded most of the way, the humidity was brutal. There was only a small breeze for a couple of minutes toward the end of our 6.2 mile walk. We were happy for any breeze at all.

While we were doing our walk, Bob was out on another part of Leon Creek Greenbelt doing a marathon training run. He finished up a little after we did. Earlier we thought we'd all go to breakfast, but after talking to Bob by phone at the end of his run, we all decided to head for home shower. Bob watched part of the Dodger game. I took a nap.

For a late lunch, we went to 54th Street Grill and Bar. Both of us ate salads.

Back at the 5th wheel, after 60 Minutes, we watched HGTV's Beachfront Bargain Hunt. Then I fell asleep in the recliner for a couple of hours. Of course, now it's 2 a.m. and I'm wide awake. Even the cats beat me to bed!

Speaking of cats, here are a few photos I've been meaning to post...

Monday, I've got a long list of chores. I better try to get some sleep!

Travel Bug out.
Posted by TravelBug-Susan at 12:00 PM 4 comments:

OR...How much stuff can I cram into one blog?

Let me begin by saying: Our life is not boring! Over the past two weeks, we have been busy doing a variety of fun stuff, in addition to our usual walks.

But before I tell you about what we've been doing, here's a birthday message I want to send: HAPPY BIRTHDAY to my son, Michael, who turned 36 today. Michael, the day you entered our lives we were so thrilled. Throughout the years you have exceeded our expectations and we are very proud of you. I hope you're having a wonderful celebration today in Oregon. Play some laser tag for me, okay?

In my last blog, I forgot to mention we went with our friends Lisa and Joe to see the San Antonio Missions play baseball on Wednesday night, August 5. It was a beautiful evening at the ballpark and we had a relaxing time watching the game.

The last time I wrote, Sunday. August 9, we had walked the south part of the downtown River Walk. On Tuesday, August 11, I wanted to see the movie "I'll See You In My Dreams" with Blythe Danner and Sam Elliott. It had some pretty good reviews and I liked both of the main actors. The movie wasn't what I expected. It started out with the death of her beloved dog. It was obvious she hadn't done much with her life since her husband died 20 years earlier; her life was very routine, nothing exciting happened. She played cards with her friends who lived in a senior community. They wanted her to move there, but she wanted to stay in her house. Her dog dying was a wake-up call for her to get on with her life.

One day, while she was in a drug store checking out vitamins, Sam Elliott walked up to her and said, "You don't need those, you look fine just the way you are," then walked away. She was smitten. The rest of the movie deals with issues of growing older, coming to terms with what's happening in your life, and making plans for fun events in the future. This would be good for a Netflix rental, but don't expect too much from it. In the end, it disappointed me, even though the critics seemed to like it.

Bob took Tuesday afternoon off work and met me at the theater to see "San Andreas." Now that's an exciting summer blockbuster! We were on the edge of our seats through the whole movie. It's about a big earthquake hitting the Hoover Dam/Las Vegas area and setting off an even larger magnitude quake along the San Andreas Fault in California. Wow! Quite the movie thrill ride!

After the movie, I hopped in my car and drove home. It took Bob quite a while to get home. He had left me a voice mail because my phone was still turned off from the movie so I didn't hear it ring. While we were in the theater, his truck was broken into. They stole his radio, his briefcase with his computer, and his gym bag with his sweaty gym clothes in it. (He had just bought his brand new briefcase a few days earlier.) That really sucks. This is the second time in three years his truck has been broken into.

Wednesday through Saturday, I worked my usual days at the RV park. On Saturday and Sunday our managers at Travelers World RV Park, Brenda and Terry, went to the Texas RV Association (TRVA) annual meeting. While I was working on Saturday, an email was sent out from one of our Carefree RV Park associates who was also at the TRVA annual meeting. She announced that Travelers World RV Park just received the 2015 Texas Small RV Park of the Year Award! How cool is that? This is a nice way to be honored.

On Sunday, August 15, Susan, Bob and I walked Salado Creek Greenway (10k) out and back from Lady Bird Johnson Park in San Antonio. Again, temperatures were in the mid-80's when we started walking at 8 am, with humidity in the 80s. Ugh. But I'm glad we got out for some air and exercise. 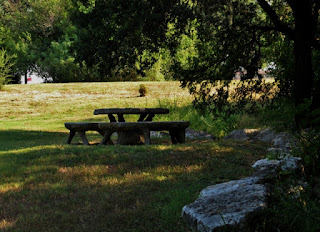 Walk over, time to eat breakfast. The Magnolia Pancake House sounded pretty good; however, it's VERY popular on Sunday mornings...as in 65-75-minute-wait popular. We were too hungry to wait, so we decided to drive to IHOP down the road. We were seated within ten minutes and soon had food in front of us.

It felt good to have a 10k walk and breakfast all finished up by 11 am. We went home and slept for a couple of hours after that.

Monday morning, August 17, Susan and I were going to walk Salado Park Greenway again. I got up, drove to the park to meet her at 7 a.m., but no cars were in the parking lot. I wondered if she was stuck in traffic, so I checked my text messages. I should have checked at home before I left. She had sent me a message in the middle of the night saying she couldn't make it. Oh well, I was there, so I did a 5k (3.1 mile) Volksmarch by myself. The trail wasn't crowded. It was definitely warm and humid even at 7 a.m. (before the sun came up).

I finished walking by 8 a.m., then went home to do chores: vacuuming, laundry, washing dishes, cleaning the bathroom.

Tuesday morning the 18th, Susan and I walked the Brook Hollow neighborhood which has lots of shade. Doesn't make much difference when the humidity is high. Whenever we do this walk, we see lots of deer.

Tuesday evening, August 18, I had free tickets through AARP to see a free pre-screening of "Learning to Drive," a movie coming out in a couple of weeks. The movie stars Patricia Clarkson and Ben Kingsley. I thought the movie was very good. It's about a middle-aged woman whose husband leaves her for a 30-something-year-old woman. She is devastated by the disintegration of her marriage, the ensuing divorce, and having to sell the house they shared for years in New York City. During her life she never learned to drive because either her husband drove her places or she took public transportation. A cabbie (Ben Kingsley) who drove her and her husband home after he had just confessed to his infidelity, heard her pleas for him to come back to her. One thing leads to another and we learn the cabbie is an Indian from the Punjab who is a Sikh. We learn about his culture, and that he teaches driving classes to supplement his income. She decides to learn how to drive. Tips about life are given during the driving lessons and the cabbie becomes her friend. This movie is so much better than "I'll See You In My Dreams." There's more depth and heart.

I have been wanting to see concerts at the Majestic Theater in San Antonio. So many good musicians are coming that we had to choose wisely which ones to see. On Wednesday, August 19, we chose to see Weird Al Yankovic. You know the crazy musician who parodies other musicians. He writes all the parodied lyrics himself and dresses in wild outfits that go with his songs. You may remember his song "Eat It," which is a parody of Michael Jackson's "Beat It." I can tell you we had a very fun time listening to and watching Weird Al and and his band. Plus the Majestic Theater is a place you should make it a point to see while you're in San Antonio. It's amazing. Two of the songs Weird Al sang that were my favorites besides "Eat it," were "Foil" which parodied Lorde's "Royals," and "Word Crimes." He is truly a musical genius.

Thursday evening, August 20, we went to the Missions baseball game with Maureen and Gary, friends from Bob's previous workplace. Again, we had a pleasant evening watching the game. When we left in the 9th inning, the Missions were up by 3 points.

That pretty much covers the past two weeks. I'll get to today in my next blog...hopefully tomorrow.

Travel Bug out.
Posted by TravelBug-Susan at 12:57 AM 6 comments:

Susan, Bob and I met at El Tropicano Hotel at 7 a.m. to get an early start on our South River Walk Volksmarch. We haven't done this walk for quite some time. Today, I found "treasures" on our walk. This is mostly a photo blog looking for unique sights along the River Walk. 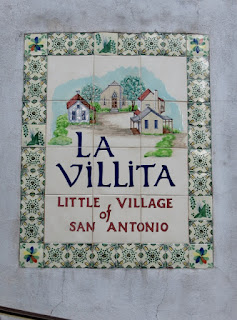 I hope you enjoyed this photo blog of the San Antonio River Walk through the downtown area. It doesn't matter how many times you visit, there is always something new to catch your eye.

Our walk was very nice and not too humid. After our walk, we hit Taco Cabana for breakfast. Great morning!
Posted by TravelBug-Susan at 6:44 PM 2 comments: