I'm taking my mental time machine back to Sunday, January 28, to our 10k "BBQ, Clocks, and Movies Walk" in Lockhart, Texas. The walk was sponsored by the Selma Pathfinders Volkssport Club on Saturday, January 27. However, sometimes life gets in the way and you really want to do something but you already have other plans. Such was the case that Saturday.

The bad part about doing the walk on a different day is that you miss things. In this case, we would have liked to go in the Southwest Museum of Clocks and Watches, but it is only open on Saturdays. We'll just have to make another trip there on a Saturday.

The morning was quite cold when we started. I had to go back to the car for a scarf, hat, and gloves. If I remember correctly, it was in the low 40s with a cold breeze, and Bob was wearing shorts! Brr.

Even if we couldn't go into the museum, I took a photo of it as part of the historic downtown scene.
History of Lockhart: The city of Lockhart is named after Byrd Lockhart, an assistant surveyor of Green DeWitt and reportedly the first Anglo to set foot in Caldwell County. Lockhart was the site of a victory of the Texans over the Comanche at the Battle of Plum Creek in 1840. Lockhart was originally called "Plum Creek," but the name was changed to Lockhart.

Per Wikipedia, the Caldwell County Courthouse is built in the Second Empire architectural style, with the design often attributed to Alfred Giles; however, recent research indicates the building was designed by Henry E. M. Guidon,  who eventually became partners with Giles. The courthouse is nearly identical to the Goliad County Courthouse, as it was built from the same Guidon plans.

The exterior of the three-story courthouse is cream-colored limestone and red sandstone. The central clock tower houses a four-faced Seth Thomas Clock Company clock and a 900-pound bell. The mansard roof of the courthouse is characteristic of Second Empire design.


According to our walk brochure (which got their information from Wikipedia as well), Lockhart has several claims to fame. In 1999, the Texas Legislature proclaimed Lockhart the "Barbecue Capital of Texas." Lockhart has four major barbecue restaurants. We'll talk about the other claims to fame as we come to them in the walk.
Below is Kreuz (pronouncedd "krites") Barbecue where we ate lunch after the walk.
From Kreuz Barbecue, we headed under the highway and into the City of Lockhart Municipal Park. The sun was shining through the Spanish moss on the trees. Birds were singing.

I saw a woodpecker of some type high in a tree, but I could not get a photo of it. It just kept moving around (imagine that).

My friend, Phan Anderson, made the adorable braided hat in the photo below. I love it! This will get a lot of use. 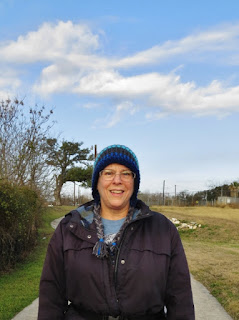 Next, we crossed the railroad tracks and headed into some neighborhoods.

Clouds moved back in and they were awesome. Some of them looked like an Oriental painting of hills. 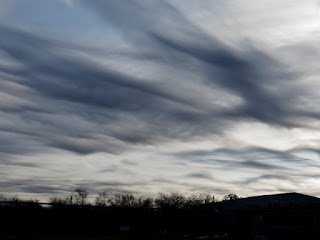 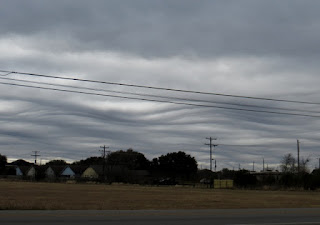 The neighborhoods we walked through had some great homes. 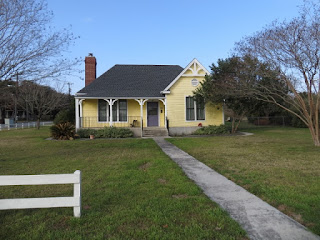 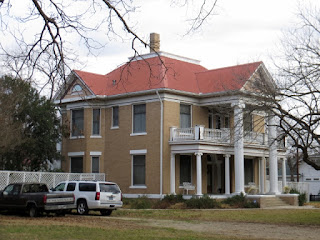 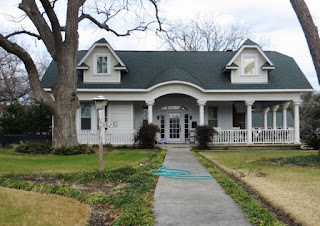 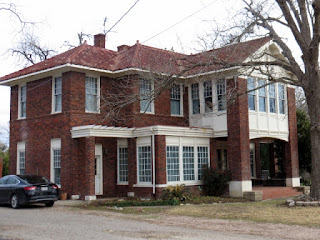 With all these beautiful buildings, certainly Lockhart must have some claim to fame for them! And it does. Lockhart was the subject of an article by the architectural historian and critic Colin Rowe, first published in Architectural Record in 1957, and republished in the collection of his writings As I was Saying (1996). Rowe sees Lockhart as a "curiously eloquent" example of a Victorian post-frontier American town. 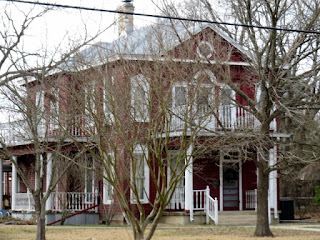 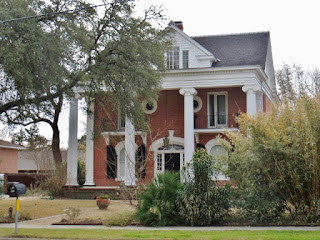 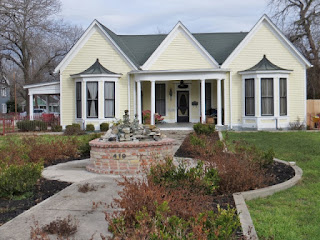 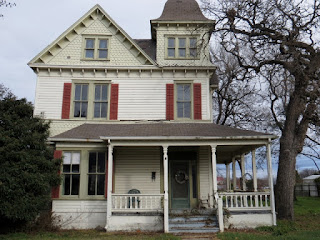 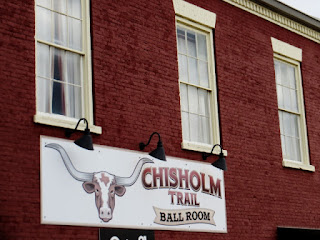 Our first 5k is done. Now we're heading out for the remainder of the walk.


Back into the neighborhoods, we saw this beautiful xeriscape. The rocks were awesome. 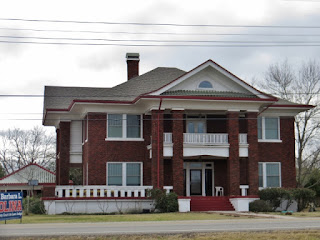 The Lockhart high school has its own water tower. 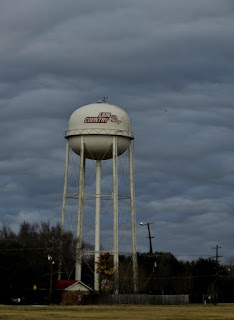 Another Lockhart claim to fame:  Dr. Eugene Clark Library. The building is an outstanding example of French Renaissance style. Built in 1899, this library was financed with funds bequeathed by Dr. Clark, who was a prominent physician of Lockhart and San Antonio. This is the oldest operating public library in Texas.

One last Lockhart claim to fame: Lockhart has played host to many film sets, as this quaint small town is just 30 miles south of Austin. Movies filmed here include: Waiting for Guffman, What's Eating Gilbert Grape, and Where the Heart Is.

We're back where we started. Our 10k walk is done. We're finished and famished! It's time for lunch and we're going to Kreuz BBQ. Smoked meat is sold by the pound. At Kreuz, you order in the smokehouse and then go into the restaurant for your sides and drinks.

When we were finished eating, we decided the day wasn't over yet. We want to see 12 Strong at the movies this afternoon. The movie was excellent! This was a wonderful day.

That's all for now. Travel Bug out.

Posted by TravelBug-Susan at 12:00 AM No comments: