I have been on Noom for a month and I have lost 12 lb. It's important for me to share this with all of you to hold myself accountable. Since losing 12 lb. in a month is pretty rapid weight loss, I have reached a plateau which is to be expected.

For those of you not familiar with Noom, let me try to describe it for you. Many years ago I was struggling with weight loss so I went to see a dietitian. She had a major in Nutrition and a minor in Psychology. She had a very good perspective on weight loss and helped me understand eating healthily. I lost quite a bit of weight, but it has been thirty years since I saw her and the weight crept back up over the years.

Noom does not recommend any particular diet but instead teaches you about a healthy way to eat. It divides food into green, yellow, and red categories. Green consists of calorie-dense foods that contain a lot of water and fill you up, such as grapes, celery, lettuce, cucumber, you get the idea. Yellow are high-protein foods that should make up the majority of your diet, and red foods are sweets, fried foods, high-fat cheeses, etc.

But Noom doesn't only teach you about nutrition. It is life in general. Each day there are lessons you can do on your phone. You choose when you start Noom if you want to do 9-10 minutes of "class" or 10-12 minutes. You learn about drinking water, exercise, sleep, stress. You learn a lot about yourself and how you think about eating, what you can do about stress, the options for exercising, and so much more. It is really working for Bob and me. Yes, it does cost money. They have different plans available. No, they don't send you food.

For my exercise, I am currently walking a lot; however, I want to get signed up for a gym. I believe I can join one for free with Medicare. One of my goals is to get that set up so I can build muscle and stamina.

With that being said, my favorite place to walk is Six Flags Fiesta Texas in San Antonio. I walk four to five miles each time I go, ride thrill rides along the way, watch entertainment, and people watch. I am a happy lady! 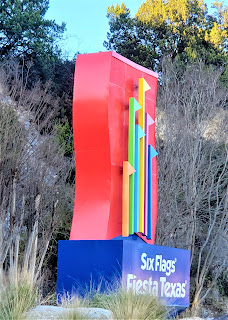 Six Flags is having their Mardi Gras celebration, so I watched Viva Carnivale in Texas State Square. They also call this show Party Gras. Singers/dancers perform a blend of Cajun and French Quarter jazz. They also did the "Cupid Shuffle" by Cupid, and "Uptown Funk You Up," by Bruno Mars. It was a lot of fun with clapping along and one group of spectators did the Cupid Shuffle line dance. Then just before I came home, I watched the Mardi Gras Parade. 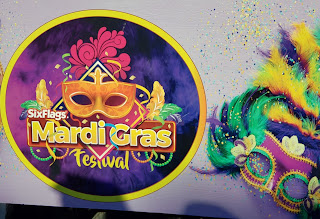 After the Mardi Gras parade, I headed home to watch 60 Minutes.
And then I wrote two blogs. Yay, a productive day! Tomorrow, housework.

Baby, it's cold outside. Bob experienced that a bit more than I did this morning. He is in training for the Alamo Half Marathon which is coming up on Sunday, March 6. The temperature when he ran at 6:30 am was 30 degrees. But he prefers to run when it's cold rather than when it's hot.

So, what's special about Shiner? According to TexasEscapes.com, Shiner began life in the mid-1880s as a trading post/post office named Half Moon. Originally, the town was bypassed by the railroad. But in 1887, the San Antonio and Aransas Pass Railway (SAAP) decided to accept an offer made by Henry Shriner of 250 acres of land for a depot and right-of-way, if the railroad would divert through his property. People started moving to the future town...

For a brief period, the town tried to get by with the name New Half Moon, but a year after the arrival of the railroad, the name was changed to Shiner. It was incorporated in 1890 and very early on became predominantly Czech and German. This is likely because ports of entry for immigrants were only a few miles south in Indianola and Galveston, Texas.

The area has remained a cotton and corn-producing region with ranching contributing greatly to the economy. The Spoetzel Brewery and their Shiner Beer have made the town a "household word" throughout Texas.

Other Shiner tidbits: Shiner citizens are called Shinerites. Shiner is billed as "The Cleanest Little City" in Texas.

Shiner is out in the country, but it has a number of very beautiful houses, not ostentatious, but very nice.

We started at Harold's convenience store and immediately walked through a neighborhood. 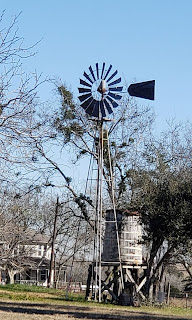 Next, we headed to and through the Shriner Cemetery. Some of the headstones and gravesites were quite old. 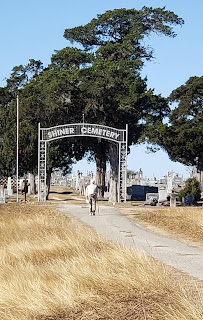 From there, we crossed over into Green-Dickson Park. A sandpiper flew overhead a number of times sounding the alarm as we passed by.

There's a lot going on at this park: a community fishing lake, a Vietnam Veteran's Memorial, RV sites, putting green, picnic tables, a baseball park, restrooms, and some pretty benches along Boggy Creek. 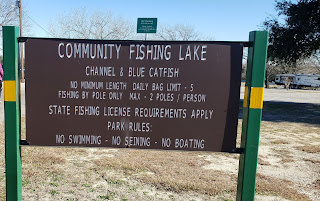 We headed uphill back toward town and waved at the other walkers who were heading to the cemetery. Quite a few people started later today. They were probably waiting for it to warm up!! In town, we saw more neighborhoods, the Spoetzel Brewery, Sts. Cyril and Methodius Catholic Church, and the historic downtown. 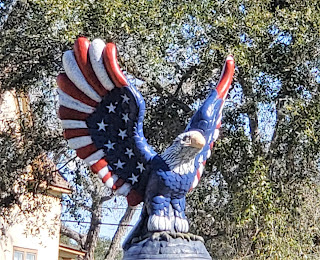 We did a lot of walking through neighborhoods on our way to the Spoetzel Brewery which makes Shiner Beer. Our walk today was supposed to start at the brewery and there would have been tours available. However, yesterday they shut the brewery down due to a COVID outbreak at the plant. We still walked to it, we just couldn't go in.
As we headed toward the brewery, Holly and Joe were heading toward us. They keep up a very brisk pace

We continued through neighborhoods and looked for a place to eat. Instead, we found a Circle K where there was a restroom. That was a good find. We decided to eat lunch after the walk in Gonzales, Texas, at a restaurant we like.
Our next point of interest is the magnificent 1921 Saints Cyril and Methodius Catholic Church. Wow! Just look at the brickwork on this edifice! It's a red brick Romanesque Revival-style structure with painted murals and stained glass windows imported from Bavaria, Germany. I have never been inside the church, but I would love to take a tour if they offer them!

We continued back into the historic downtown. Earlier, we passed by the refurbished Opera House. Unfortunately, I didn't get a photo of it. 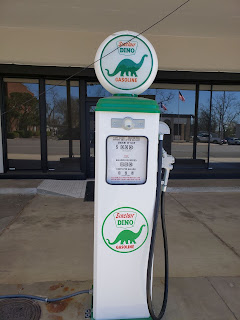 On the way back to Howard's Convenience Store, we walked around the block at Welhausen Park. It's a small community park that has Christmas lights starting December 1 each year.
The walk was billed as 11k, but both of our phones showed exactly 10k. Off we went to Gonzales for lunch at the Running M Bar & Grill. Holly and Joe ate there, too. Susan Medlin drove us to Gonzales in her car. I drove us home in her car.
Thank you, Susan, for picking me up. (My Jeep has been in the shop for two weeks. It needed a lot of repairs. My engine had a bad oil leak and a ticking sound [found by Ancira to be the tappets and lifters]. It also needed a tune-up, replacement of the coolant thermostat [the check engine light], the front timing cover had to be resealed, and the oil cooler had to be replaced, oh, and the alignment needed more work).
You probably have heard the acronym for FORD - Fix or Repair Daily. I made up a new acronym for JEEP - Just Expect Engine Problems. In all the years I've owned Fords (Explorer and two Escapes), I've never had problems like I've had with this Jeep I bought nine months ago. I'm so glad I got an extended warranty, but it only covered one of the engine problems and nothing else in that whole list. But it did save me $700 on the total repair bill. But I'm ranting on about this. At least my Jeep is fixed...for now.
On a lighter note, the sunset was gorgeous tonight! Take a look. 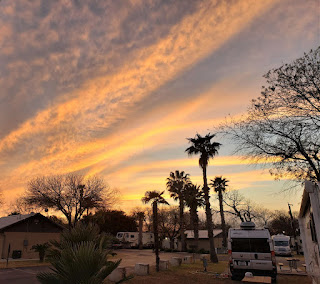 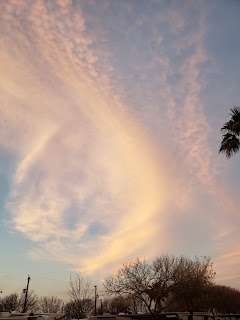 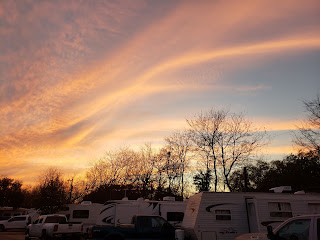 That's all for today. Good night.
Posted by TravelBug-Susan at 9:30 PM 2 comments: