The morning was leisurely for me. I slept in, showered, and Bob cooked a wonderful omelet breakfast. We also each had hot chocolate with half a cinnamon roll that we bought at The Daily Bread in Hot Springs, South Dakota.

Bob had to work early this morning, so we planned to hike at Vedauwoo (pronounced VEE-da-voo) Recreation Area later in the morning. Scattered thundershowers were forecast at 4 pm.

Vedauwoo is famous for its rocky terrain, consisting of boulders, slabs, and cliffs. People come here from all over to rock climb, mountain bike, hike, and camp. It's a land of enormous Sherman granite rocks made of pink feldspar, white quartz, black specks of horneblende, and other minerals including sparkly mica. These ancient rock formations were created by ice, wind, and water and defy gravity up to 500' in the air. You'll see what I mean in the photos. It looks like many of those rocks shouldn't be up there. And, it is the case that rocks could tumble down at any time.

[NOTE: I think I should have been a geologist. Places like Vedauwoo in Wyoming, and Enchanted Rock north of Fredericksburg, Texas, fascinate me. Both geologic wonders started out as giant batholiths.* (*batholith: a large mass of igneous rock that has intruded and melted surrounding strata at great depth. Batholiths usually have a surface area of over 38 miles squared. As is the case with Enchanted Rock, a lot of the batholith is underground.)]

A beautiful national forest campground sits amidst the towering rocks at Vedauwoo. It is first-come, first-served dry camping with vault toilets and a central water spigot. There are a few large RV sites, but most are for small-to-mid-sized units. There is a separate campground for tents only. This campground is easily accessible from I-80.

We drove 40 minutes west from Cheyenne, Wyoming on I-80 to Vedauwoo in Buford, Wyoming. When we arrived at the self-pay station, we had forgotten that this park is in the Medicine Bow-Routt National Forest. If I remembered my National Park Pass we wouldn't have had to pay the $5 fee. Oh, well, we don't mind supporting our national park system.

Our goal today was to hike the Vedauwoo Glen Loop (one mile) and the Turtle Rock Trail (three miles). I took a plethora of photos today. Oh, we had striking fall colors as well!

Today, we parked in the Box Canyon Day Use Area and walked the easy Vedauwoo Glen Loop Trail. The surface of the loop trail is paved, but you can take a short dirt out-and-back side trail to an old bridge and scramble on the rocks if you'd like.

There are beaver ponds along the Turtle Rock Trail. Unfortunately, we did not see any beavers, just a lodge. 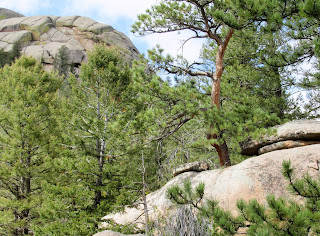 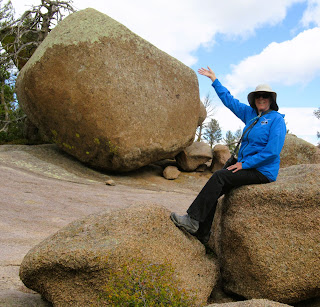 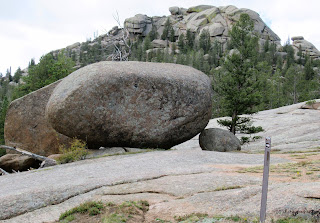 You can tell by looking at what we're wearing that it's chilly. At this elevation (7,000-8,000') it's much cooler than Cheyenne. We also did some huffing and puffing as the trail is moderate with ups and downs.

When we started hiking, it was sunny and warm in the box canyon. Bob took his coat off and tied it around his waist. I was getting warm, too. However, we knew the forecast was for scattered thunderstorms at 4 pm. It was only 1 pm, so we thought we would be okay.

It's so funny that Alltrails.com has a comment about the Turtle Rock Trail saying he spent all his time looking for the "damn turtle." So did I. If you look at the photo below, I think the big formation in front looks like a frog and the flat slab formation in the back looks like a softshell turtle.

About two-thirds of the way around the loop, we saw dark clouds moving in. It was 1:15 pm. About 20 minutes later the thunder kicked in, followed a few minutes later by rain. 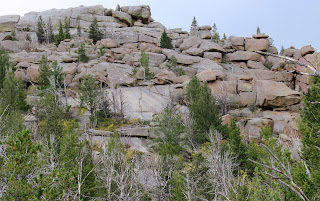 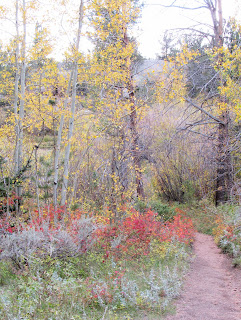 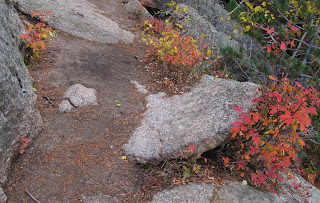 It has now started raining. We heard thunder. Thankfully, we had a steady, light rain, not a downpour.  We still got wet, mind you. We picked up the pace to get back to the car, but I couldn't stop taking photos. 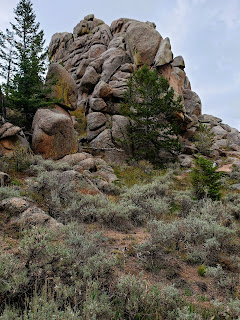 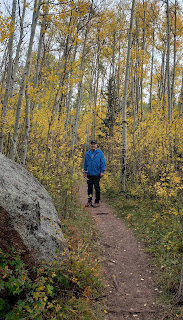 After two hours of hiking, we went to Mongolian Grill for lunch. That was a great meal after hiking in the cold and rain!

Back at the 5th wheel, Bob decided to go for an hour-long bike ride on bike paths around Cheyenne. Scattered thunderstorms were predicted all afternoon and evening.

He had been gone just about an hour when I heard thunder. The rain started and Bob returned shortly thereafter. Good timing on his part, especially because a glorious double rainbow parked itself over the RV park and he got to take photos of it.

Then, we had a beautiful sunset and a very unusual cloud formation. 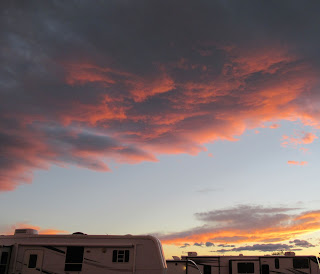 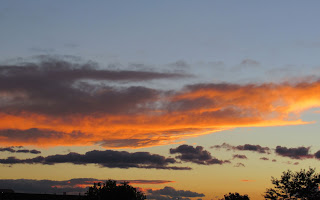 Wow, another wonderful day of adventure, including a box canyon, boulders, beavers, and bear warnings.

Posted by TravelBug-Susan at 8:00 PM 2 comments: