Our walk today is a traditional club walk staffed by the Randolph Roadrunners Volkssport Club. Today, I am volunteering at the South Side Lions Park East finish table from 9:15-11:15 am, and then Susan Medlin and I will do our walk.

Ellen Ott was busy at the beginning. She pinned "Awesome" tags on a number of people to thank them for their contributions to the Randolph Roadrunners Volkssport Club. Martin is our photographer.

At 11 am, there will be an awards ceremony at the Pavilion and a hot dog lunch. We're looking forward to it.

In case you wondered what happened to Bob, he flew to Las Vegas for Thanksgiving with his family (mom, sister, nieces, and nephews). They're doing a lot of walking in Vegas and Bob has been out running nine miles two mornings in a row. He's flying back Saturday.

The temperature when I arrived at the park was 48 degrees. It was chilly, so I had on a T-shirt, sweatshirt, heavy winter coat with a hood, jeans, and warm socks. From time to time at the finish table, I also put on my shearling-lined gloves. The wind was out of the north and it was cold.

Forty-two walkers joined us this morning. This walk differed from the year-round event during the first 5k. Instead of going all the way around the lake and joining up with the Salado Creek bike path, about halfway around the lake, the walkers headed up a short hill to the west side of South Side Lions Park. The walk then took them around the pool, ball fields, and Community Center, past some homes, and a big water tower. Once that part was done, it was a quick walk downhill and completion of the loop around the lake to the finish table.

At 11:15 am, Ellen presented service awards to a number of Volksmarchers including John & Susan Ives, Mike & Kathy Schwencke, Diana Adelman, Bob and me, and a number of others. We then had a hot dog lunch with drinks, chips, and a choice of desserts. Ellen Ott made a Devil's Food Apricot Cake, and Susan Medlin made two dump cakes (one blueberry and one pumpkin). Mmm. Delicious lunch.

With lunch literally under our belts, Susan and I did our 5k walk. This was the portion of the walk that we hadn't done before. Here are photos of what we saw.

The Golden Shower tree was blooming and turning color for fall, all at the same time! 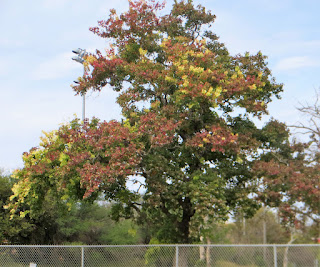 Pecan Valley Lake at South Side Lions Park East is stocked with all kinds of fish. Every time we've been to this park, fishermen line the lake fishing from the shore. As we walked up, this gentleman had just caught a big catfish and he consented to have his photo taken with it.

At the beginning of our 5k walk, Laurie Sue joined us. When we returned to the finish, we were told they saved three hot dogs just for us. So, we finished them off. I won't need too much dinner tonight!

Thank you, Randolph Roadrunners Volkssport Club, for organizing this event every year. The walk is lovely.

Tomorrow, Susan Medlin and I plan to do the Comfort Christmas Walk with the caveat that if it's pouring rain we'll opt out of the walk and go to the movies. We hope for nice weather, though, because we love the Christmas Market.

Posted by TravelBug-Susan at 7:06 PM 3 comments:

Today, we're making a day trip from Canyon of the Eagles Resort to do two walks that I need for my Texas Hill Country Special Program Book: Pflugerville and Georgetown. Pflugerville was farther away so we went there first. (Note: When you pronounce the town name, the "p" in Pflugerville is silent. The town loves to mimic this silent "p." For example, the town's newspaper is the Pflugerville Pflag and they have a pfarmer's market, a sports pfield, and a pfinesse salon and spa. I may get a little carried away with this. LOL.)

Here's a little Pflugerville history for you. The village was pfounded in 1860 when William Bohls established a general store and post office in his residence, and named the town in honor of Henry Pfluger. Pfluger first arrived in 1849, leaving his German homeland to escape the Prussian War. He originally purchased 160 acres of land near Austin from John Liese, a brother-in-law who had immigrated before him.

Many people in "the Old Country" had last names that were a reflection of the type of work their family did.  Pfluger means tiller or plowman, basically a farmer.

In 1853, Henry Pfluger exchanged the land for a larger pfarm. The family lived in a pfive-room log cabin and raised corn, wheat, rye, beans, sweet potatoes, and sugar cane. They also raised cattle, which Henry and his sons drove to Market on the Chisholm Trail.

It was not until the Missouri-Kansas-Texas railroad arrived in 1904 that the town experienced a period of rapid growth. Within ten years of the arrival of the railroad, the population had doubled to 500 residents. The Depression halted the community's growth as citizens moved to larger cities to find work. The population continued to decline after World War II, and by 1949 the number of residents in Pflugerville had fallen to 380.

Pflugerville began to grow slowly in the 1960s and was incorporated in 1965. Pfrom 1980 to 1988, new development in Pflugerville made it the pfastest-growing community in the state!


As we were facing the Veterans Fallen Warrior Memorial, we looked to our left and saw a bench with a plaque under it. This bench is in memory of Bunker Ehlert, a dedicated organizer and pioneer of the Colorado River Walkers AVA walking club. 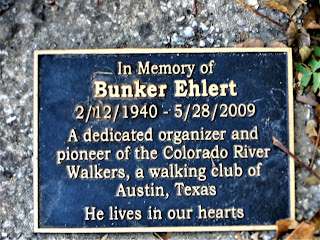 We continued into the old downtown. 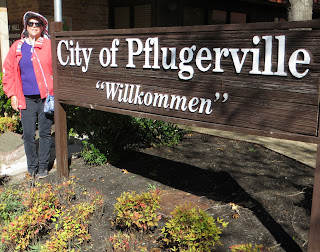 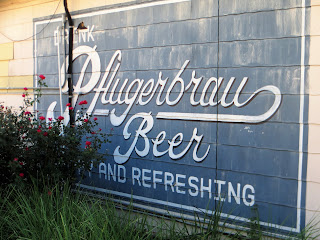 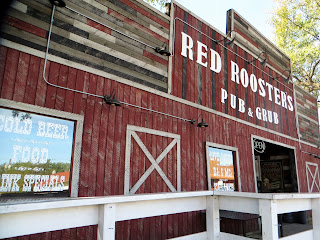 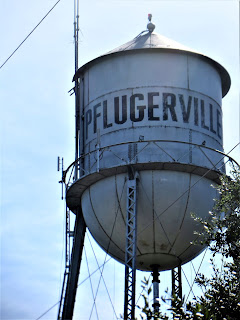 After the Pfairways Trail, we were back in the old downtown. There was a food truck court and they had a cupcake trailer. Mmm! I was hungry and this was an opportunity for a good treat. I ordered a Devil's Food cupcake with buttercream frosting. She pfrosted the cupcake just before she handed it to me. It was wonderful. Bob was being super steadfast in his weight loss program and did not get a cupcake. We finished our 10k (6.2 mile) walk in Pflugerville and drove one-half hour to Georgetown. (I'm done with the "pfs" now.)

My, my, my, we were surprised when we tried to park close to the Georgetown Visitor Center, the starting point for our walk. The 2nd Saturday Market Days was in full swing and the Town Square was buzzing like a beehive of agitated bees. We had to park three blocks away from the Visitor Center so we gave ourselves an extra kilometer to make up for it. We learned that Georgetown is "The Poppy Capital of Texas."

We signed in for the walk and immediately started looking for a lunch spot. We walked around the perimeter of the Town Square and got a partial glimpse of the county courthouse.

The old Masonic Lodge below has also been a drugstore, post office, furniture store, and restaurant. 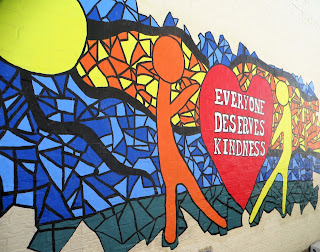 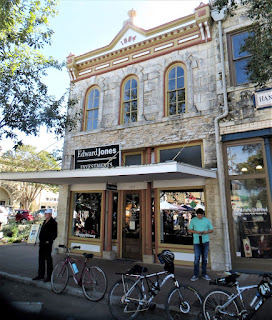 A copper dome with clocks on each side sits on top of the Williamson County Courthouse in Georgetown. A blindfolded statue of Themis at the top of the dome holds scales and a sword. Themis is the ancient Greek goddess of justice. 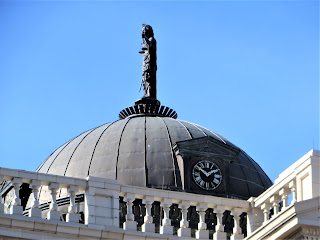 There were a few food trucks at the Market Days, but none of them looked like our lunch. We finally settled on The Golden Rule Restaurant on S. Church St. Good decision.

We chose to sit inside because it was quite warm outside. We bellied up to the bar and it turns out we sat right in front of the bartender. We got to watch her make drinks throughout our meal. That was cool.

The menu was different. I had three deviled eggs of varying flavors and a small veggie quesadilla. It was very good! I don't remember what Bob had.

Here's a short history of Georgetown: In the early years, the economy of the community depended on agriculture, predominantly cotton and grains. After the Civil War, Reconstruction brought prosperity to Georgetown through four main industries - cattle, cotton, the University, and the railroad.

Related industries, such as an oil mill and cotton gin were established. The new prosperity motivated residents to forsake their log or frame homes for more substantial and stylish shops and homes. It was this surge of building and planning with Victorian storefronts and houses which characterized the pride, beauty, and elegance of the early settlers and is still evident today in these same homes and businesses.

To date, over $27.5 million has been reinvested into the downtown historic area and what exists today is one of the finest collections of high-style Victorian commercial architecture in the state of Texas. [Historic information was provided by the Georgetown Visitor Center.]

After lunch, we looked around the Town Square area a little more before we started walking.

The sculpture below references a time in Georgetown's past when work mules were tied to hitching posts and watered on the Downtown Square.

Time to get out of Dodge and see the rest of the town, pardner. Highlights of our walk were gorgeous homes, the University (of which we only saw a corner), and the Blue Hole swimming, kayaking, and fishing hole. 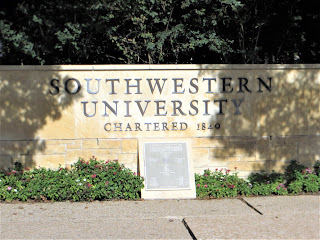 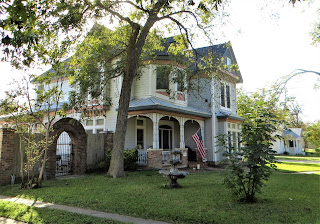 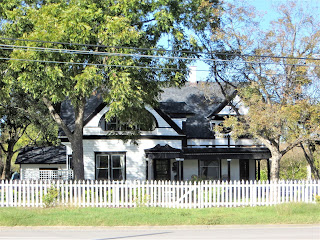 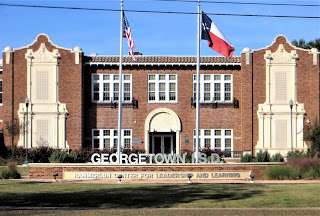 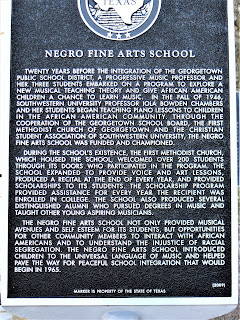 Next, we headed down to the South San Gabriel River and The Blue Hole. 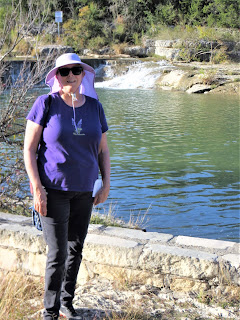 We finished our 8k walk back at our truck. It was 4 pm and we had a dinner reservation at Canyon of the Eagles Resort's Overlook Restaurant at 6 pm. The drive back to the resort was one hour. That left us with one hour to shower and get ready for dinner. We were cutting it close.
As we were driving to the campground, we saw a woman standing at the edge of a field with a camera that had a big telephoto lens on it. At first, we thought she saw an animal at the edge of the forest.
Then Bob said, "Do you see it?"
I'm like, "What?"
"There's a huge bird in the tree," he replied.
The lady told us it's a Great Horned Owl. Wow. I was able to snap a shot of it even though it was getting dark.
When we were ready for dinner, we drove to the restaurant and were stopped by an owl hunting on the roadway. I love these nature moments!
The Overlook Restaurant overlooks Lake Buchanan. It was pitch black by the time we arrived and couldn't see the lake. We still had a wonderful dinner. I ordered Canyon Chicken: herb-crusted Red Bird Farms airline* chicken breast, wild mushroom au jus, dressing cake of pinon nut, cranberry & sage, and seasonal vegetables. It was wonderful; so many savory flavors. Bob had a seafood Cobb salad which he enjoyed. Dessert was chocolate cake with vanilla ice cream.
*If you're wondering what an airline chicken is, Bob asked. It's the way they serve the chicken with a small wing pointing straight up like an airline wing. It lost something in the translation. LOL.
This was a fun, but very busy, day. Somehow, we packed it all in.
Tomorrow morning, Bob is going to walk or ride his bike before we have to check out. Me? I'm going to sleep in! Ciao for now.
Posted by TravelBug-Susan at 11:30 PM 2 comments: