We have finally found cool weather--misty and drizzly--like Oregon in the spring or fall. The place is Oconomowoc, Wisconsin. The temperature ranged from 71 to 73 degrees F. today while we did our 10k walk. I know it sounds wimpy, but as 35-year residents of Oregon, we still needed our umbrellas for a good portion of the walk. Right now, Oregon is experiencing record-high temperatures (110-117 degrees)! It's nice to be in a cooler clime.

This is the first pre-convention walk we have done on this trip that is actually on the day they scheduled it. That means we saw lots of people we knew from far and wide. Diane Howell Evans is here from the Olympic Peninsula of Washington, Ellen Ott, and Susan and Darren Medlin (our BFFs) are here from San Antonio, and we saw many other walking friends who are now arriving in the Madison area.

In addition to the walk, there was also a Volkssporting bike event today. Diane Howell Evans rode her bike first, and then she did a walk afterward. Wow. She's a bundle of energy.

In reference to the title of my blog, I submit the following photo:

I finally figured out that the five O's help you spell the name of the town; every other letter is an O!

Our walk started at the Oconomowoc Community Center. The first little bit of the walk passed through City Beach on Lac La Belle, just to give us a taste of what our walk would be like. It looked wonderful.

The old part of town on Wisconsin Avenue has murals and lots of shops and eateries. It was fun exploring.

Oconomowoc was a town that attracted people from the big cities of Milwaukee and Chicago to build summer homes on the lakes here. And, boy, are there some big, lovely ones. Photos of those will come later. 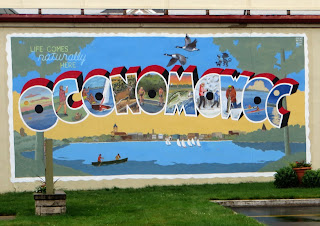 Speaking of well-heeled gentlefolk loving to summer here, below is a luxury train car that was used to transport the city dwellers to the only flagstone train station in the country. They were dropped off blocks away from the stinky cattle yards. 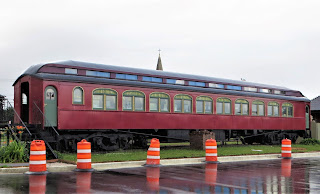 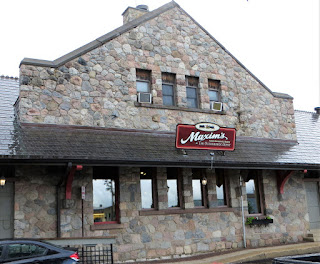 From downtown, we set off into the neighborhoods of Oconomowoc where we saw churches, parks, and nice homes. 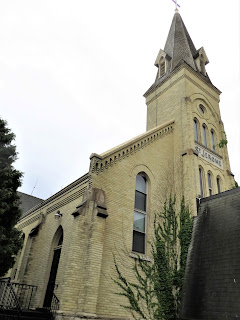 In Roosevelt Park, my six-year-old self would have loved to spend an hour playing at Imagination Station. It's an adorable playground with many fun play structures. My imagination was certainly captured by it. I think I got carried away photographing it!


Our next stop was downtown at Veterans Memorial Park. They did a very nice job putting this memorial together to honor all branches of the service and to include military symbolism. 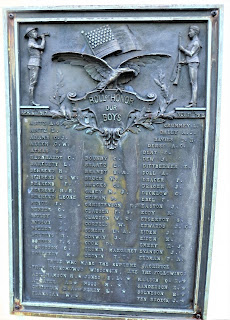 The next portion of our walk circumnavigated Lake Fowler. This is a ritzy neighborhood! The gorgeous "summer homes" are here (most are dated from the mid-1800s to the early 1900s.) The homes in this neighborhood are pretty easy on the eyes!

The house below was owned by the Montgomery Ward family (an heiress: Marjorie Montgomery Ward). This mansion, known as "Knollward," has 52 rooms and 15 bathrooms! It was built in 1928 for $80,000 and recently sold for $3.1 million. 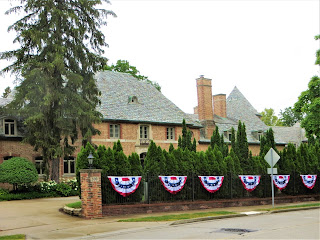 We walked past The Inn at Pine Terrace. I would have loved a photo of it, but too many trees were in front of it. The history of this place is very interesting. I will quote the historical marker in front of it.

"This nineteen room Victorian mansion was the showplace of Oconomowoc when it was built by Peter and Henry Schuttler in 1879 at a cost of $30,000. The Schuttlers were successful Chicago wagon manufacturers known not only for their serviceable farm and commercial vehicles and their fancy society carriages, but also for their sturdy 'prairie schooner' used by pioneers traveling westward across the plains and over the mountains. It has been said that the Mormons, setting out for Utah, insisted upon Schuttler wagons before beginning their journey.

"Reflecting the prestigious lake country living of other wealthy industrialists, 'Mon Bijou,' as the Schuttler estate was called, was strictly a summer residence for the two brothers and their families. They owned the property until 1922. For the next seventy years, it served vacationers as the Pine Terrace Resort.

"In 1987, after much carefully detailed restoration brought the structure back to its original opulence and to the prominence it shared in the days when Oconomowoc was known as the 'Newport of the Midwest,' the house was entered in the National Register of Historic Places. Today the Inn at Pine Terrace is a unique bed and breakfast inn."

We continued through the neighborhoods around Lake Fowler and I found more favorite homes in the process.

We made one more pass through downtown. It was time to check out what "The Wizard of Oz" movie had to do with Oconomowoc.

"The Wizard of Oz" was shown in downtown Oconomowoc at the Strand Theater on August 12, 1939, before its big debut at Grauman's Chinese Theater in Hollywood on August 18. In fact, it was the first theater in the country to show the movie. The movie was based on L. Frank Baum's book, "The Wonderful Wizard of Oz."
The Oconomowoc Historical Society and Museum has many items from "The Wizard of Oz" on display including flying monkeys, Glinda the Good Witch, the scarecrow, Dorothy, and the Wizard of Oz. We didn't get a chance to go in, but now I wish we had! 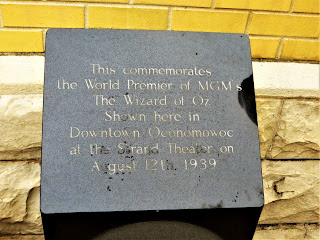 The following photos were taken at Wizard of Oz Plaza beside Oconomowoc's City Hall.

The Wizard of Oz colorful, fiberglass statues were manufactured by F.A.S.T. (Fiberglass, Animals, Shapes, & Trademarks) Corp. located in Sparta, Wisconsin. The figures include scarecrow, Toto, Dorothy, tin man, and the cowardly lion. Fiberglass statue molds for all kinds of projects dating back to the 1960s share a big yard outside F.A.S.T. Corp. in Sparta. [NOTE: Bob and I saw a lot of the molds alongside WI 21, but we didn't know what we were looking at! I would love to go back and roam around looking at all the stuff they have there. There's not a fence around it.]


When we finished our walk, Susan, Darren, Bob, and I decided to have brunch at Maxim's in the old flagstone train station. It was very busy.
After the 10k walk, we were "hangry" and we had to wait a long time for our food, but it was oh-so-worth it!!  I had an asparagus scramble with whole-grain toast, and a fruit cup. Mmm! So good. Everyone at the table was very happy with their food.
This Volksmarch pre-convention walk was wonderful. The points of interest were great and after the walk, it was fun to research things to learn more. Thank you to all the volunteers who made this event possible. Your work paid off and we loved it.
NOTE: The photos of the griffins were not part of the walk. Darren told me about them and Bob and I searched them out so I could get photos. 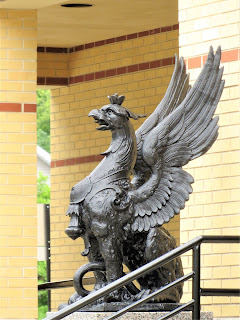 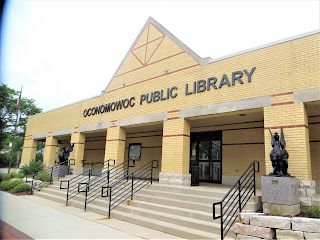 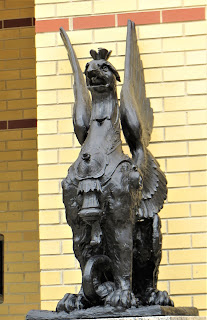 Tomorrow, we're taking a day off In the afternoon, we'll sign up for a couple more walks and get our books stamped for the walks we've already done ahead of the convention. We invited Susan and Darren to our campsite for dinner and a campfire tomorrow evening (weather permitting). If we can't do the campfire, we can eat and drink inside.
That's all for today.
Posted by TravelBug-Susan at 11:00 PM No comments: