Wednesday through Saturday, I worked 40 hours. Friday after work, I took Bob to dinner at Wing Daddy's Sauce House. Our first impression was not good. First off, it was too loud. Secondly, there was too much going on. TVs everywhere, which is good if you're there to watch sports (we weren't). Third it was very crowded. We ate and headed back to the 5th wheel.

After work Saturday, we went to Random for Randall's "Get the Heck Out" Party. Randall is moving back to Oregon to be with his girlfriend, Marissa. We are thrilled. She is wonderful.

Randall worked at Random for almost two years doing many different jobs - night security, operations, ordering, stocking, bar back, prep, bartender, cleaning, opening, closing, and some construction. As Randall says, "He knows where all the bodies are buried." After his almost two years there, he will be missed.

Will Owen Gage Trio played for Randall's party. One song we thought was very apropos was "Leaving on a Jet Plane." It was a beautiful evening and Randall was honored appropriately.


We had a wonderful spring evening at Random. We left Random at 9:00 p.m. and headed to our second party of the evening at the RV park.

Bob Emberton was having his annual birthday bash which started around 5:00 p.m. By the time we arrived everyone was in full-on party mode. The liquor was flowing freely. Some people had left but the hearty party-ers were there. We had our Redd's Apple Ale and some shared Fireball whiskey, chatted for a while, and then headed home.


Wow, two parties in one evening. Wheeee! Travel Bug tipsy and out.

Tuesday, March 24, I took a day off, well sort of. I caught up on my blog writing.

Being home with the cats all day, some photo opportunities presented themselves. While I don't have much to say for the day, there are a few photos to share.

Posted by TravelBug-Susan at 9:27 PM 2 comments:

Upon entering South Llano River State Park, I know to look for birds and wildlife. My first find is a great blue heron who I scared up from the river next to the road. 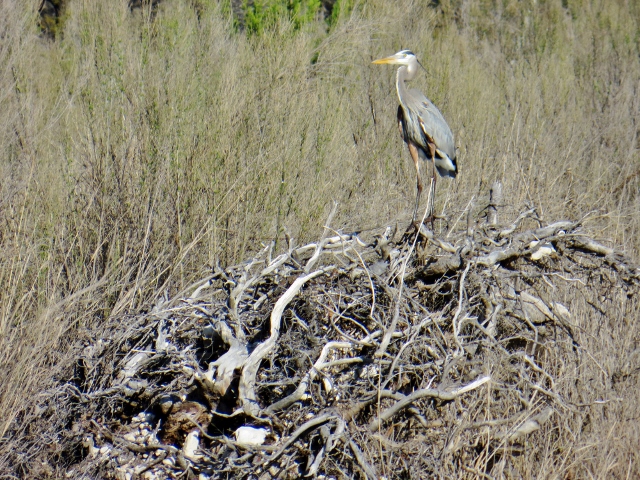 The state park office had already closed, so I filled out paperwork to put in my windshield, then headed for a bird blind to see what was around. Many male and female cardinals, mourning doves, and black-throated sparrows were about. The cardinals were particularly happy in the water.


After such a fun bird bath and no more exotic-type birds, I opted to drive around the campground, then go to another bird blind. Good choice. On my way to the campground, I saw five turkeys near the road. At this time of year, part of the park is closed off due to turkeys nesting, but hey, if the turkeys are next to the road, they're fair game for photos, right?


I drove the circle around the campground and just as I was almost out of the circle, my eye caught movement. Could it be? Yes! It's an armadillo! This is the first and only time I've seen a live armadillo in Texas. The only other time we saw one in the wild was in Costa Rica in the middle of the night.


Feeling pretty thrilled by the armadillo sighting, I headed on to another bird blind. Three people were just leaving so I had the place to myself. My find at this bird blind was a black-crested titmouse. This is a bird I've never seen before. It flits around a lot, so it was hard to get a decent photo.

After hanging around watching these birds, I took a walk around the old barn next door. The sun on the old wood was awesome. 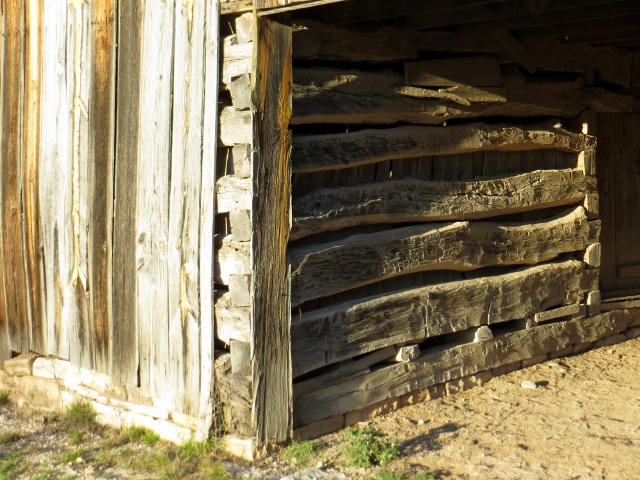 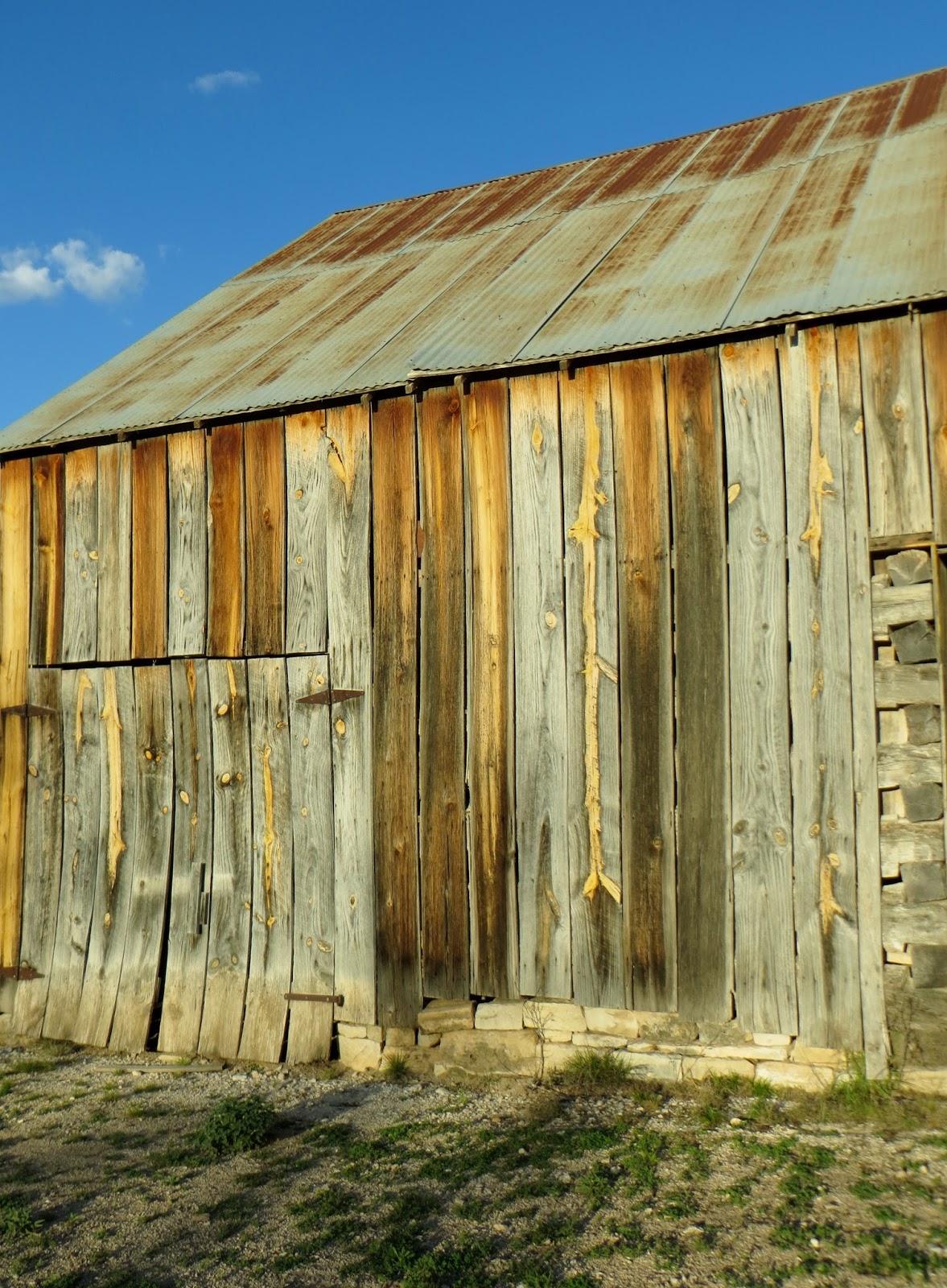 To cap off my wildlife viewing experience in South Llano River State Park, on my way out I saw two more forms of wildlife and one I had seen on the way into the park.

In a field to the south of the park road were two black bucks. I could only get photos of one due to the existing light. Exquisite.

I was not quick enough to get a photo of the other animal, a skunk. It ran across the road in front of me. By the time I would have stopped and grabbed the camera, it was in the brush on the other side of the road. This skunk is not like skunks in Oregon. This skunk had long white fur on its back. It looked like the following drawing, only its tail was down and the white fur flowed on both sides of its back to the ground. It looked awesome.


As I drove out of the park, the great blue heron was still fishing by the road.

And that, folks, was the end of my day exploring Junction, Texas. The last rays of the sun were behind me as I headed home, arriving around 9:30 pm.

Forecast: Mostly sunny, 82 degrees. Looks like a perfect day for a road trip. I might see some wildflowers too.

At noon I headed to Junction, Texas, about one hour and 45 minutes from San Antonio. I felt like doing another Volksmarch. Bob was working, so off I went. When I finished my walk, I wanted to spend time bird watching at South Llano River State Park. This was going to be a full day!

Once in Junction, I started my 10k walk at 2:30 pm (heat of the day, silly me!). There was very little shade on this walk so I was glad I had two bottles of water. I also ate two ounces of string cheese at the beginning of the walk for a bit of protein/energy.

The walk routed me on back roads and city streets of Junction. Yellow and white butterflies flitted around my ankles as I walked. I walked the loops in two parks: Junction City Park and Kimble County River Park. Here's what the walk looked like... 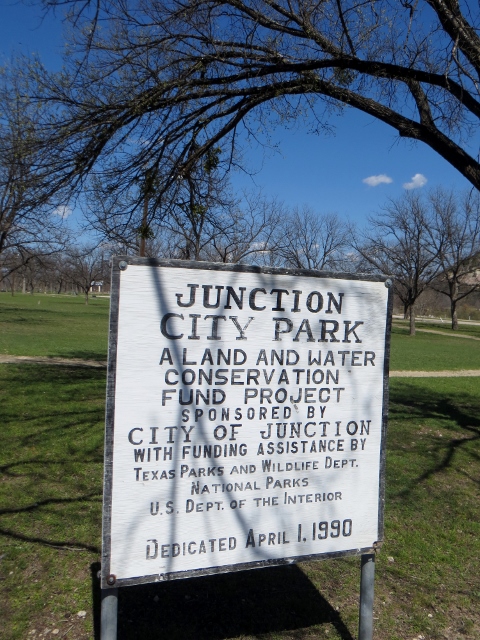 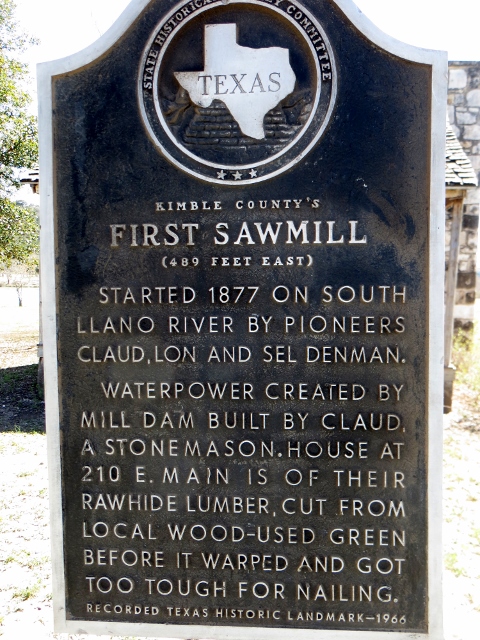 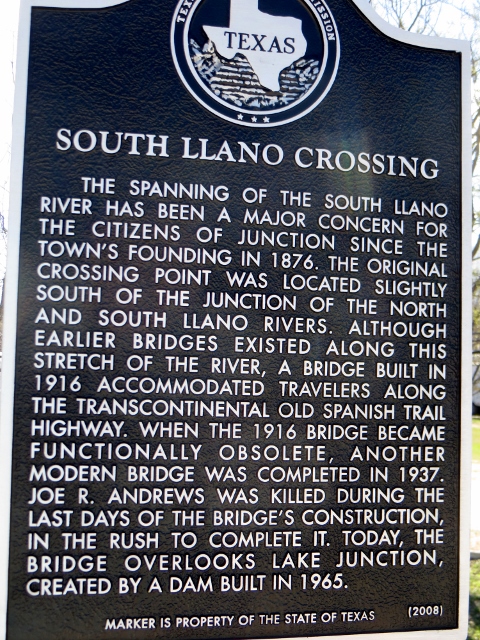 The day was getting hotter. Every once in a while, a slight breeze came through and those were mighty welcome! From the parks, the route headed into the old downtown past the county courthouse. Lots of historic markers graced the lawn around the courthouse. Most historic markers were about people integral to the town's early days. 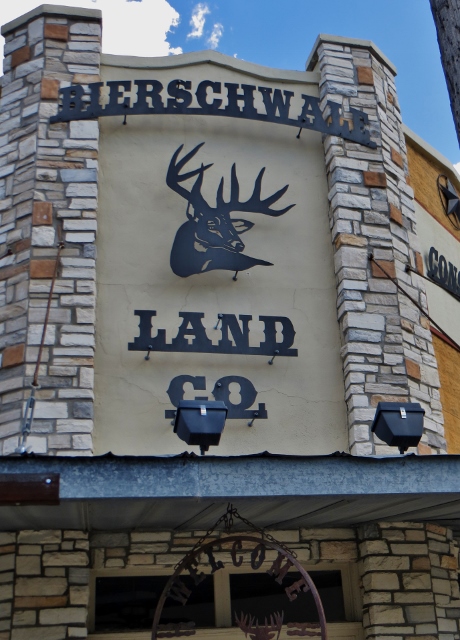 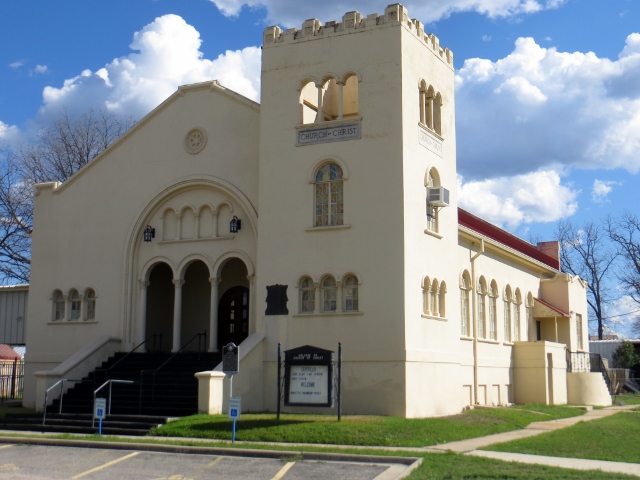 The Volksmarch is almost done and so am I. The temperature at the local bank registers 87 degrees F. Pretty warm considering there is almost no shade on this walk. Only seven blocks left to go.

When I returned to the car it was dinner time. I made a beeline for Dairy Queen where I had three tacos and a small Blizzard. That tasted sooooo good!

From Dairy Queen I had the choice of heading for home or going to South Llano River State Park to go bird watching. I figured since I was already so far from San Antonio, I might as well make the most of it. The state park won.

This blog is plenty long already. To be continued in my next blog...

Posted by TravelBug-Susan at 5:52 PM 4 comments: