It's not often I get out of bed earlier than necessary, but it happened today. I hadn't read our walk instructions closely enough, which said our start time was 9:00-11:00 a.m. I was there at 8:15 a.m.

Other club members were already at the pavilion at Southside Lions Park to mark the trail, set up for a hot dog lunch, put out flyers, and get ready to register the walkers. I was asked to set up the upcoming event flyers.

Having walked the Southside Lions Park Salado Creek Greenway Trail many times before, I signed in early and started walking.

Today, Bob did his last training run (10 miles) for the San Antonio Rock 'n' Roll Marathon next Sunday, December 3. He wasn't able to join us on the walk.

If you know me at all, you know I'm a nature girl at heart. I'll share photos of the natural beauty (and some man-made) that we saw today. Off we go...

Pecan Valley Lake is a very nice size. Early in the morning, there are always fishermen lining its banks. The birds hang out here, so the fishing must be good. Today, I saw neotropic cormorants, Northern shovelers, double-crested cormorants, American coot, and great egrets.

The path around Pecan Valley Lake is one mile, marked at one-tenth mile intervals. From the lake, we took off on the Salado Creek Greenway Trail. 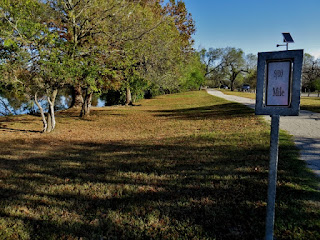 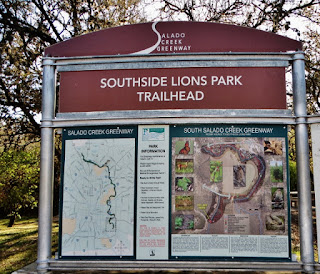 I'm sure most of you know what a "nurse log" is, but in case you don't, the photo below is a perfect example of one. A nurse log is a fallen tree that becomes a nursery for new plants that live off the nutrients of that fallen tree. They are an important part of forest ecology. We saw these a lot in the Pacific Northwest, but I haven't seee many in Texas.

A very nice feature of many bike paths in San Antonio are the "turn-outs" (one is pictured below). They are multipurpose: use the rocks as a place to sit and rest or eat a snack, stretch, tie your shoelaces, or just chat with friends.

Along part of the creek are palmetto palms. This is in a particularly cool, grotto-like area. 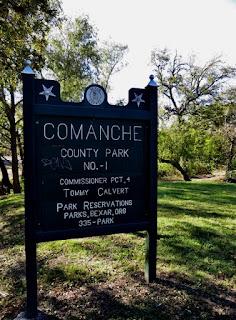 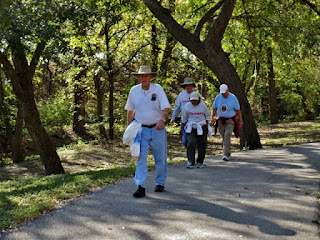 The hot dog lunch for $5.00 was very good. In additon to the hot dog, we had chips, soda, home-made dill pickles, and home-made pumpkin crunch dessert or blueberry-pineapple crunch dessert with Cool Whip. (Most of us sampled each of the desserts which were provided by our Southwest Regional Director Susan Medlin. Thank you, Susan. The desserts were wonderful! Thanks, too, to John Ives for barbecuing the hot dogs.)

It was a lovely day for a walk. After walking, I went home and wrote blogs.

Mom fell in her house and broke her hip in late October. She underwent a surgery in which they put a pin through the ball of her hip. Now, she is in a skilled nursing facility where she is undergoing physical therapy.

She cannot put weight on her hip, and is supposed to ring a bell for an aide to help her transfer from bed to her wheelchair. Sometimes they don't show up very fast. Once mom tried to do her own transfer and the aides found her passed out in bed. Thankfully, she did not fall to the floor.

She was transported to the hospital. The reason she passed out was because two different nurses gave her the same medication (so it was an overdose that caused her to pass out). That is not supposed to happen.

They also did an X-ray for her back pain and found a fractured T9 vertebra. Supposedly, this fracture is old. She was also very dehydrated and was given a quart of I.V. fluids.

It was reported to us that they wanted to do a non-invasive surgery to inject a gel or cement to encase the broken vertebra. But, the next thing we heard was they were not going to do that surgery. I don't know if my mom didn't want it, or what.

There are times when mom has excruciating back pain and the aides won't give her any more pain medication. I was on the phone with her two nights ago when her pain was so bad she could barely talk to me. She said she felt like she was in hell. An aide or nurse came into her room and I could hear the conversation. Mom asked for another pain pill. She was told she couldn't have one because she had one an hour ago. Then mom asked for a hot pack and was told she couldn't have one because she had used all her hot packs for the day. They offered her a cold pack. She could barely breathe and told me breathlessly she had to go now. Then she hung up.

Earlier in the day, she had called and left a message on my sister's home phone saying, "Oh, Jan, it hurts so bad." Her neighbor visited her that day and saw mom having one of her terrible back spasms. The neighbor was so upset, she went to get the nurses. She stayed and rubbed mom's back for a while.

Whatever happened to compassion? Medical care is ruled by insurance companies and Medicare now. That's the only reason I can fathom they would have a limit on how many hot packs she can use in a day. My sister took in some Ben-Gay heat patches, but the nurses would not let mom use those either.

Update on Mom, November 23:
Mom had a few days with no back pain (or only minor pain). She sounded so much better. She is starting to put weight on her leg and is using a walker. In physical therapy, she learned how to maneuver herself around their kitchen while they made brownies.

Update on Mom, November 25:
Once again, Mom sounded so much more chipper on the phone. Jan has been visiting her frequently. They go on all three floors of the nursing facility (Mom is in her wheelchair).

A jigsaw puzzle is set up in one room and Jan likes to work on it. Mom roams the halls in her wheelchair and checks back in on Jan and the puzzle from time to time.

Jan and Mom had Thanksgiving dinner in the assisted living facility dining room where they "had the works." Janyce took over a TV show, "Touched by an
Angel," and she and Mom watched it.

Our "adopted" Vietnamese sister, Kimmie, visits Mom and takes dinner on Tuesday nights. Last week, she took in a beautiful orchid for Mom. This week, Kimmie's son Devon, and his wife Tammy, visited with Mom.

My sister, Jan, has been a rock and a God-send. She does so much for Mom: driving 45 minutes each way to see her, taking in food from time to time, bringing in supplies Mom needs, and spending time with her. When the weather is nice, Jan takes Mom outside in her wheelchair. However, Mom said it is too cold today to go outside, so they will "walk" the halls on all the floors.

I am flying to Portland on the night of Dec. 1 to be with Mom for ten days. It will be wonderful to spend time with Mom, my sister, brother, and son.

There are some things in Oregon I need to take care of, too. It seems we can't get her Oregonian newspaper delivery stopped. My sister tried to take care of it, but they said they would put it on "vacation hold." She told them she didn't want that, but they wouldn't cancel it. So, with a "vacation hold," they still charged her checking account $36.

Update on us, November 25, 2017 (going back in time):
I am back to working full time (four ten-hour days) in the RV park office after taking the summer off. It's fun being in the hospitality industry. Most people are happy because they're traveling and want to know what to see, where to eat, and what events are going on. I enjoy taking reservations over the phone and checking people in. I volunteer to do movie night in the Rec Hall once a month and keep the park's Facebook page up to date.

Bob's job is going well. Their company has grown by leaps and bounds so he is  keeps track of all the budgets, job costs, employees, etc. He's the Controller. For Thanksgiving, we got two turkeys from Southwest Electrical Contracting (where he works).

On my time off, I walk, hike, go to movies, travel, attend concerts and festivals, work on jigsaw puzzles with my friend, Susan, and ride roller coasters at Six Flags Fiesta Texas. Bob goes with me when he's not working, or training for the San Antonio Rock 'n' Roll Marathon; otherwise, I go with my friend Susan. [Note: The Rock 'n' Roll Marathon is Sunday, December 3.]

On Saturday, November 4, Bob and I went to Diwali, the Festival of Lights. We had Indian cuisine from the food court for dinner and watched dance performances from each of the Indian states. There was so much color and movement of the clothes, plus a fireworks show next to the Tower of the Americas. Very beautiful! 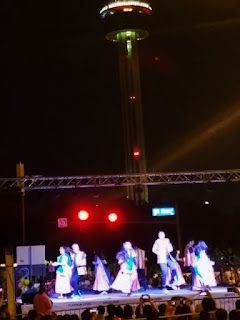 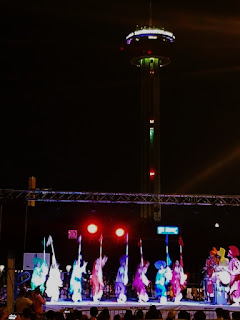 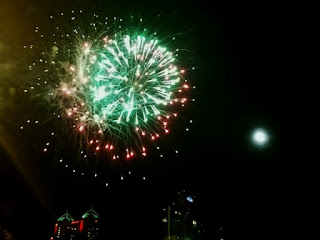 After we spent a couple of hours at Diwali, we headed over to Boozehounds to listen to Arrowhead and have a couple of drinks.

Sunday morning, November 5, we were up bright and early to do the 10k Wurstfest walk in New Braunfels, Texas. The route took us through lots of neighborhoods, the old part of downtown, and past the Wurstfest grounds.

Many historic homes (all types of architecture) lined our walk route. 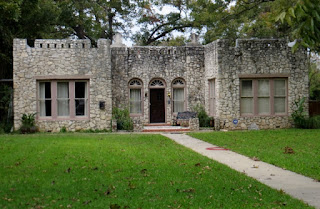 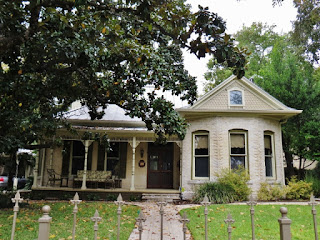 We had a checkpoint at New Braunfels Railroad Museum. 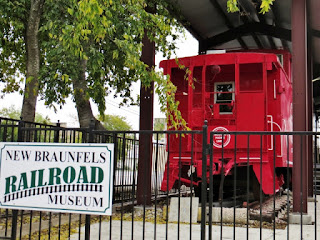 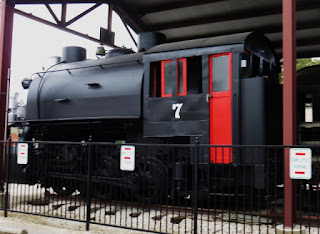 And did I mention Wurstfest? 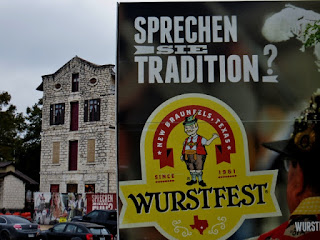 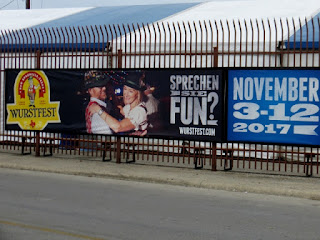 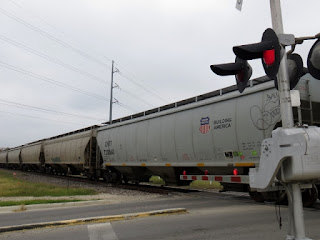 Our walk included tickets for free entry into Wurstfest. We finished our walk at 10:00 a.m. and Wurstfest didn't open until 11:00 a.m. Being tired, we decided to head for home.

That's all I'll report on now because I want to put this blog to bed and publish it already!

The next few blogs will catch us up even more. We've been busy!!

Posted by TravelBug-Susan at 5:39 PM No comments: