I have now walked in all 51 U.S. capitals! Six years ago, I bought two American Volkssport Association (AVA: America's Walking Club) Special Program books: one for 50 states and one for 51 U.S. capitals. Today, I completed the capitals book with Bob and my new friend Diane Howell Evans from Seabeck, Washington. My 50 states book was completed on August 20, 2019, in Portland, Maine.
It is so interesting and synchronistic that Diane Howell Evans, a Volksmarcher who I never met before, was reading one of my Facebook posts where I mentioned going to Helena, Montana, so I could finish visiting all 51 U.S. capitals. Her last capital was also Helena, Montana. She wanted to complete her capitals and asked when would we be there. It was late May when she contacted me and we planned to meet on June 22-23 in Helena.
On June 21, 2020, Diane and her husband Rick drove to Helena from Seabeck, Washington, on the Olympic Peninsula. We are on a one-month RV trip with Helena being our farthest destination and visiting the capital is the reason we came here.
Tuesday, June 22, we met Diane at 8:00 a.m. at the start point, Jorgenson's Restaurant. It was 73 degrees without a cloud in the sky. We had our instructions and we were ready to walk! The Helena, Montana Volksmarch is 11k (6.8 miles). Diane, Bob and I headed out post-haste.
One of our first stops was the Capitol. There was no problem entering the building. It was open and mostly deserted. We picked up the self-guided tour brochure and checked in with the security guard. There haven't been any guided tours of the capitol in Helena since 2017 due to budget cuts. We pretty much had the place to ourselves.
The self-guided tour begins on the second floor in the Rotunda. The French Renaissance styling is hollow to accommodate electrical wiring.
The three of us meandered around the capitol. We couldn't go into the Senate and House of Representatives because they're not in session and the doors were locked. Pictures through the windows of those rooms left a lot to be desired. A famous painting, "Lewis and Clark Meeting Indians at Ross' Hole," by Charles M. Russell dominates the House of Representatives chamber.
In the House Lobby are six paintings by Montana artist Edgar S. Paxson, a contemporary of Charles M. Russell. The murals show important events in Montana's history.
Other pretties in the Montana Statehouse include a 90-panel barrel vault with original and reproduction glass, and the original hexagonal glass-lens-floor pattern was replicated in ceramic tiles. There is a lovely stained-glass piece at the top of the second-floor stairs, but no mention is made of it in the brochure. 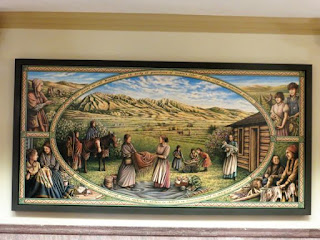 When we finished at the capital, we walked a number of blocks on Broadway and then turned at the Lewis and Clark County Courthouse to walk past the Myrna Loy Center. Here are the sights we saw along the walk.

We were impressed by all the history we saw in Helena. The town was founded because placer gold was found here. Prosperity is evident in the style and abundance of public buildings and private residences. Even after the gold ran out, Helena did not fade into obscurity. Instead, because Helena was situated in an area rife with ranches, mines, and freight routes, forward-thinking businessmen created a banking and supply center.
A couple of the "Copper Kings" of Butte (William A. Clark and Marcus Daly)  became embroiled in Helena's politics when they fought over the city that should become Montana's capital. Of course, it all had to do with who would profit the most from the capital's location.
Anyway, as our walk progressed, we went by the Original Governor's Mansion and then headed into downtown Helena.

As we entered the downtown "Helena Historic District," we noticed it's compartmentalized into areas or "blocks," such as "Bullwhacker Block," the "Trolley Block," "Last Chance Gulch," "Reeder Alley," "Goodkind Block," "Power Block," and "New York Block."
We turned into Last Chance Gulch, a pedestrian-only shopping area that winds back and forth. It follows the original road that wound between placer claims. This is the actual gulch in which gold was discovered in 1864. This was once the grand thoroughfare of Helena's business district.
There are all types of architecture. One building, in particular, was rather unique, Power Block. First off, it incorporated two styles of architecture: Romanesque Revival and the American transition to the then-emerging Chicago school of architecture. If you look at the photo below, you will see that the rounded northeast corner features openings that correspond in number to the floor level.
The first floor has one door, the second floor has two windows, the third has three windows, and so forth.
More cool things to see in Last Chance Gulch...
The two photos below show the First National Bank Securities Building. Montana Territory's first bank was chartered in 1866. The building combines Romanesque, French Second Empire and Victorian-period stylistic elements. It is made of native granite and brown Wisconsin sandstone.

Explanation of the sculpture above: During Helena's gold rush days, freight wagons were pulled by oxen. In order to keep the freight moving, bullwhackers cracked whips over the heads of the oxen and cursed at them. The oxen responded to the noise and moved on out. 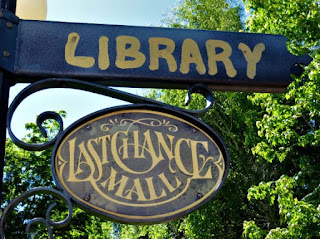 From Last Chance Gulch, we crossed the street and found the Yee Wau Cabin. This is the only remaining Chinese-associated dwelling in Helena. From 1876-1888 the Yee Wau brothers, local dealers in Chinese merchandise and groceries, owned the property. The Yee Wau Cabin is at the entrance to Reeder's Alley. 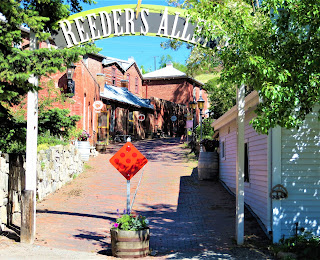 Reeder's Alley consists of tiny row houses that once housed miners and later, single men of different occupations. At one time, about 32 one-room apartments spread along the narrow alley in various buildings. As was the custom at the time, rent was paid in gold dust. 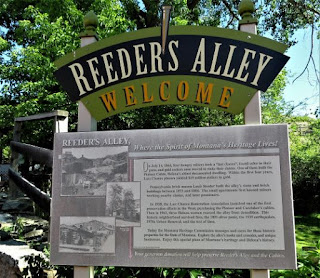 Okay, we were officially ready for a snack. It just so happened that Park Avenue Bakery and Cafe was 1/2 block away. All three of us started in the door and were immediately told only four people were allowed in at one time due to COVID-19. If there was a sign on the door, we missed it. Our bad. There were already three customers inside so all of us went outside to wait.
In less than a minute, we were able to go inside. Oh, my. What goodies awaited us. Bob chose a turtle brownie, Diane had a cookie, and I couldn't wait to sink my teeth into a blueberry pecan cinnamon roll. Judging by how quickly these items disappeared when we sat outside to eat them, this stop was a definite thumbs up all the way around!
After we sat to eat (which felt really good, by the way), we continued on our journey around Helena. The big mural that we passed earlier looked completely different at this end of the block.
This walk kept on giving us new input and we loved it. Our walk instructions came with a handout on Helena, Montana Historical Stuff. We went with the flow and enjoyed everything we were seeing. 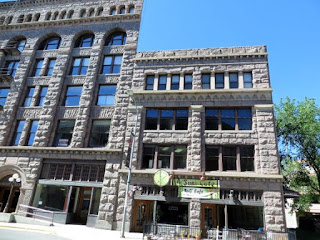 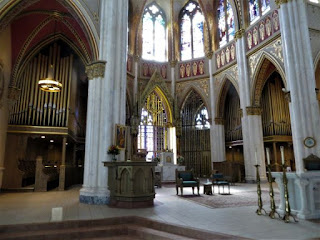 For most of our walk, we were able to follow the directions pretty well. There was one little glitch at the capital. I read the directions wrong, plain and simple. I thought that if we were touring the capital we should exit the opposite side of where we came in. However, the directions were apparently continuing on as if you didn't go in to take a tour. We should have stayed on the side of the capital where we walked up to the front door and then continued on in the direction we had been going. However, because we DID tour the capital, we went out the back door and got confused. Thankfully, there was a map on the directions and we corrected our error in two blocks.
However, we were all totally confused by the directions just before 7k and the Fire Tower Park. We couldn't find the trail up to the Fire Tower! We were on Cruse St. The grass on the hillside was quite tall and we thought we saw a trail up high on the hill, but we couldn't believe that was the way we were supposed to go. At that point, we didn't see where the trail connected at Cruse St. We walked up Cruse St. to what looked like a park with paths going through it, but there was no way to get to the fire tower. We turned around to walk back to the previous street we had been on. That's when we found the bottom part of the trail that connected to the street. We couldn't see it through the tall grass coming from the opposite direction. We were unsure about going up that steep hill on a rather unimproved trail.
Bob led the way and told us, yes, it really was a trail. So, Diane and I traipsed up the steep hill. We finally found a way to the fire tower! [A note to the people who laid out this trail: it is not a good way for people with knee problems or Achilles problems to go, or older people who do not want to risk falling down. We could have worn hiking boots for better traction here, if we had known.]
Just past 8k on the walk, we got lost again.

For some reason, after the undeveloped dirt area, at a confluence of trails, we couldn't find Highland St. (no sign), so we ended up back on Broadway. No problem, we followed the rest of the directions to return on Broadway.
At the end of our walk (which lasted 5-1/2 hours, including our do-it-yourself capital tour), we celebrated our 51st capital visit with a lunch at Jorgenson's Restaurant. The temperature at 1:30 p.m. was 84 degrees.
There is so much more to see than what I included in my blog. I am so appreciative that Diane reached out and we did the walk together. It was a lot of fun.
At the end of the walk, I asked Diane why Helena was her last state capital. She said it was because it wasn't close to places she usually travels. It's not close to or on the way to many places. That's the way it worked for me, too. In 2017, I had been to Billings, Montana for the AVA Convention, but Helena was about a four-hour trip one way from Billings. That was too far for a day trip to walk the capital. This year, we made Helena a destination to make sure we got it done.
It took me six years to make it to all the state capitals. It took Diane even longer. Both of us now have a sense of accomplishment. Way to go, Diane!
Posted by TravelBug-Susan at 3:27 AM 6 comments: