Tuesday morning at 8:45 a.m. our temperatures dropped to 31 degrees. The high temp on Tuesday was 38 degrees.

Monday and Tuesday I worked at the insurance office in north San Antonio, a half-hour from our RV park. Needless to say, I was a bit nervous driving to work Tuesday morning after San Antonio's previous sleet incident a week ago. I made it safe and sound with only a few sprinkles (which turned into ice dots) on my windshield. Not enough precipitation to freeze on the road. Thankfully people were driving in a safe manner, going under the posted speed limit and leaving lots of stopping room. It's the most careful I've seen drivers in this city.

Tuesday at work I had chills, was extremely tired and achy, not feeling my usual chipper self. In fact, I wore my winter coat in the office most of the afternoon. Around 4:30, I mentioned not feeling well and was asked if I wanted to leave early. I did!

I went home and relaxed, fed the cats, dressed very warmly and we honored our commitment to meet a friend of ours from Hawaii who was attending a convention in San Antonio. We met at the Menger Bar in the Menger Hotel.


Once we found out the pub didn't have much of a menu (and none of us wanted to drink there), we walked to Mad Dogs Pub on the Riverwalk to have dinner. Bob and I both had fish and chips. Ed had a steak and ale pie. Good grub.

After dinner, we walked around the downstairs area of the Menger Hotel. Again, the night was very cold. The outside garden area was closed, but I snuck out there anyway to get a photo of their icicle-laden fountain. 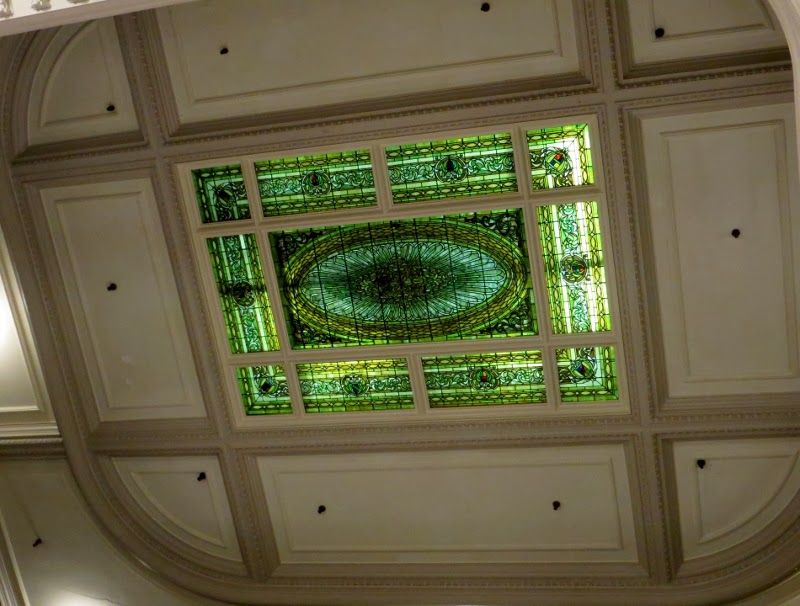 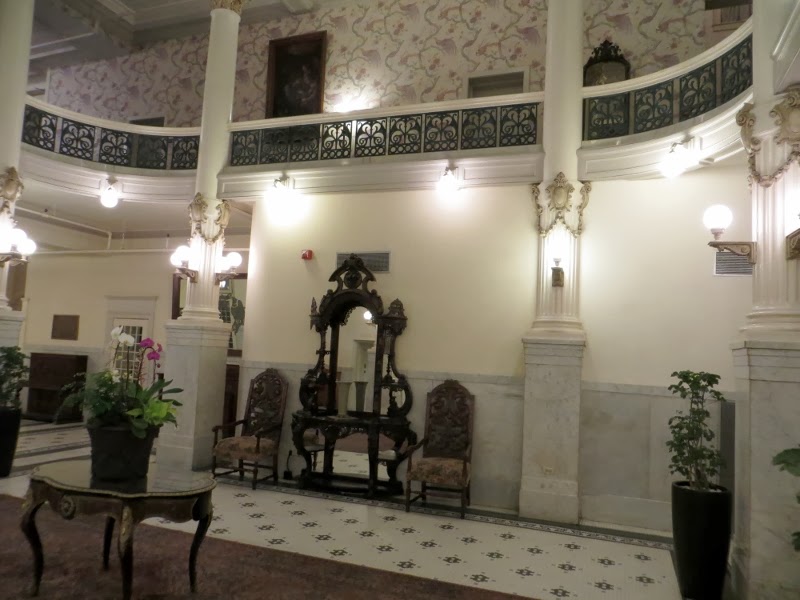 When Bob and I got home, I headed for bed and slept 12 hours! When I got up I felt like a new person. All the chills and aches were gone.

Today, I walked over to the RV park office around 2:00 p.m. to pick up our mail. When I walked in, Delia and Jan said, "You missed our staff meeting this morning." Yikes, I didn't even know there was one. Apparently they sent out an email Tuesday morning at 8:47. Problem is, I  left for work Tuesday at 8:20 a.m. and did not check my email last night. The insurance office where I work blocks AOL, and I can't check my email there, either. Big oops.

Guess I'll find out what the meeting was about when the minutes are published.

Tonight, I went into my Netflix account online to find out when "The Big Year" will arrive only to find out my payment hadn't been made because I changed my credit card due to the Target hack. I fixed the info and hopefully the movie will be mailed tomorrow.

On top of that, I looked at my checking account and found it was overdrawn. I forgot to record a check for my hairdresser. Took care of that too.

Now it's time for bed. Must take care of getting enough sleep so I don't get sick!

Having seen almost all the other Oscar-nominated films for 2013, I pick American Hustle as the Best Picture. It blew the other films out of the water. The story, acting, directing, and entire movie was so much fun to watch! And that's the thing, it was funny! Didn't expect that.

American Hustle takes place in 1978 telling the story of Abscam, and is based on the FBI's skulduggery to investigate government officials taking part in theft, forgery and stolen art. Abscam melds two words: "Abdul" and "scam." Abdul is short for Abdul Enterprises, Ltd., a fictitious company created by the FBI to serve as a front company. FBI employees posed as Middle Eastern sheikhs who had millions of dollars to invest in the United States. The Abscam operation was then re-purposed to target political corruption.

The FBI hired Melvin Weinberg, a con man and informant, to help conduct the operation. That was in real life.

In the movie, Mel Weinberg's character is named Irving Rosenfeld, played to perfection by Christian Bale. Bradley Cooper plays Richie DeMaso an FBI underling who hires Irving to work with the FBI. Then there are the women behind the men: Amy Adams plays Sydney Prosser/Lady Edith Greensly (Irving's mistress), and Irving's estranged wife, Rosalyn Rosenfeld, is Jennifer Lawrence. As the movie's opening line states, "Some of this actually happened."

What follows is a tightly wound tale of entrapment, double crossing and bribery. Each role is very well written, and the camera shots so up-close and personal, you feel like you're in each scene while the characters schmooze, flirt, yell, seduce and plot. Genius.

Watching the movie was pure, unadulterated entertainment. Best Picture of 2013 in my opinion. [Disclaimer: The only movie up for consideration of Best Picture that I have not seen is The Wolf of Wall Street. I cannot judge the merit of that movie.]

All of us loved the movie. If you've seen it, tell me what you thought.

The freezer door closed and Sunday we had gloriously sunny skies with a temp in the mid-70s. Perfect for taking our friend, Susan, on a birthday Volkswalk and out to lunch.

Austin is a beautiful city. We took the Congress St. Bridge over Lady Bird Lake into the heart of downtown. (Note: From mid-March to November, the Congress St. Bridge is home to the largest urban bat colony in North America. If you're in Austin during those months, head to the bridge at dusk to watch the bats fly out from under the bridge.) On our route, our feet passed two Golden-Age-of-Cinema movie theaters, the Paramount (1915) and Stateside (1935).

Here are photos from our walk.

Austin is a town that's all about music. Instead of painted horses, buffalo, mermaids - whatever - Austin has painted guitars.

We passed the 1885 Driskill Hotel. 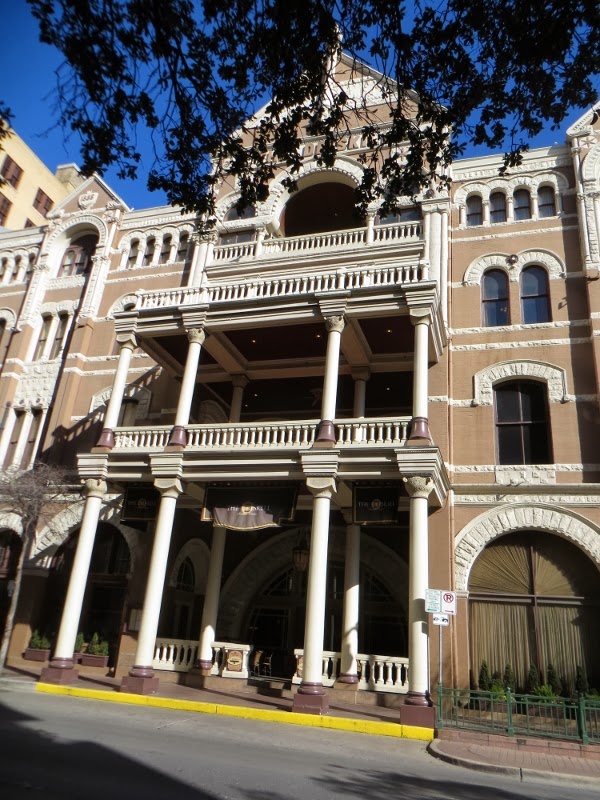 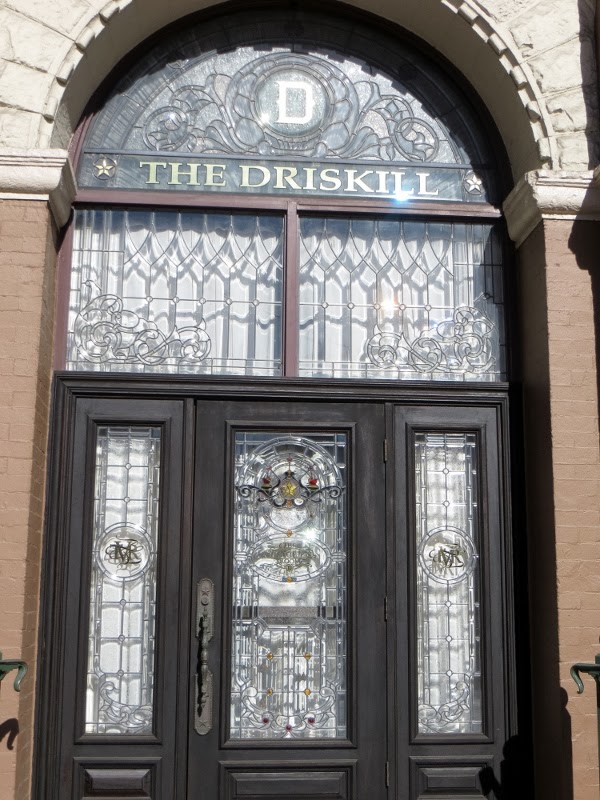 The walk criss-crossed downtown and passed through the state capitol grounds.

We would have taken the tour through the Capitol; however, because it was Sunday, the first tour wasn't until noon and we were there at 10:30.

Soldier Susan is posing with a statue dedicated to soldiers of wars from World War I to the present.
The following photos are part of the Eighth Street Mural Project... 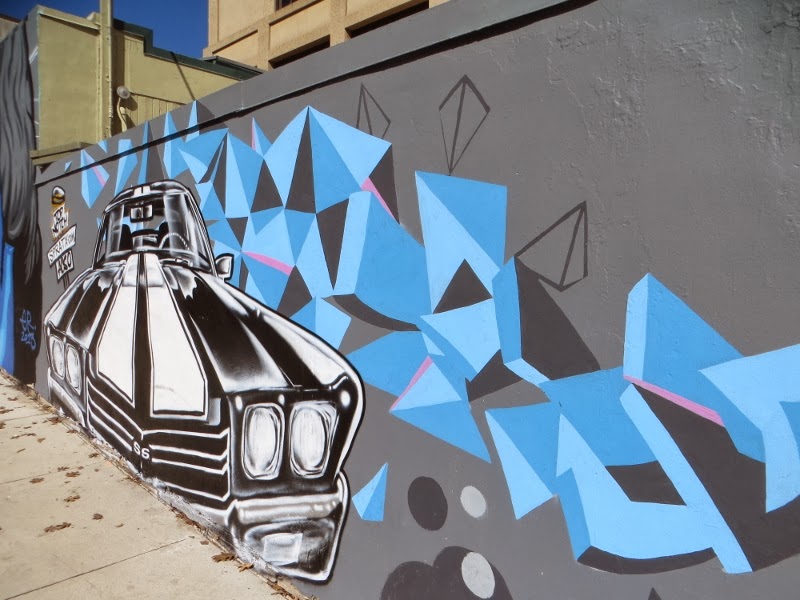 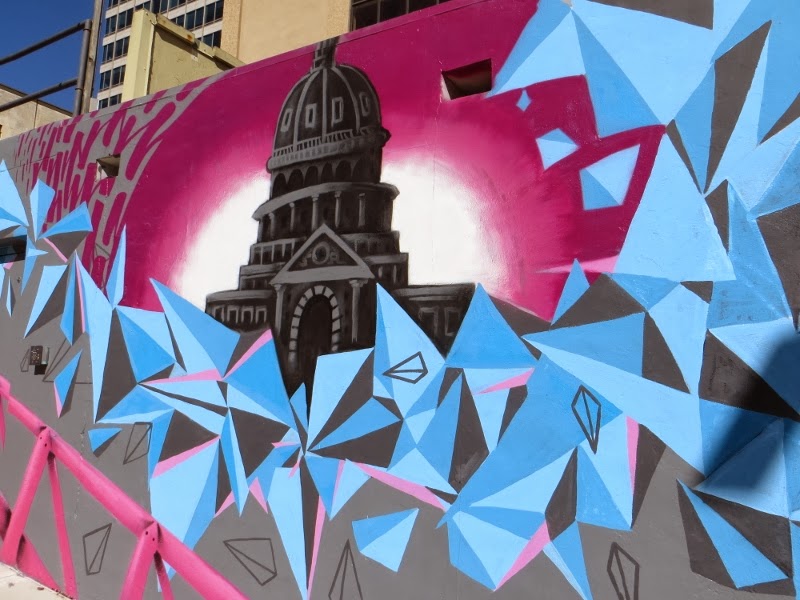 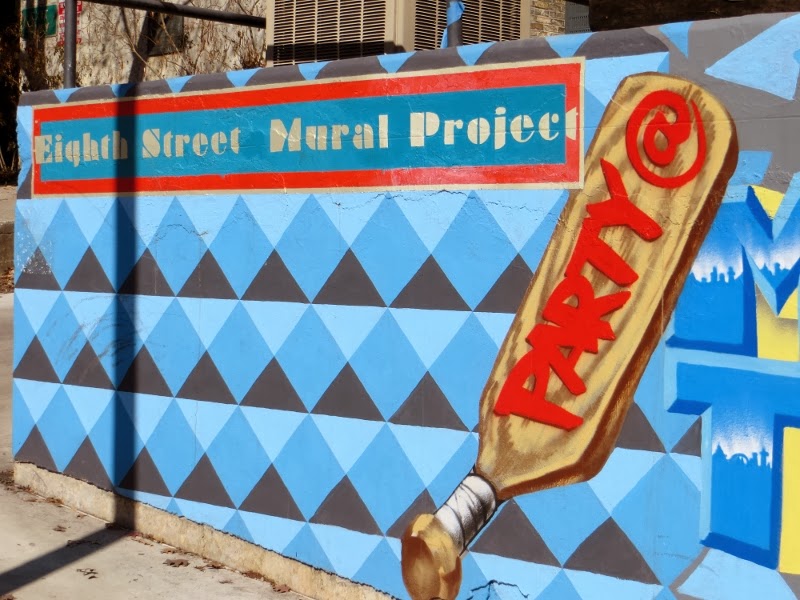 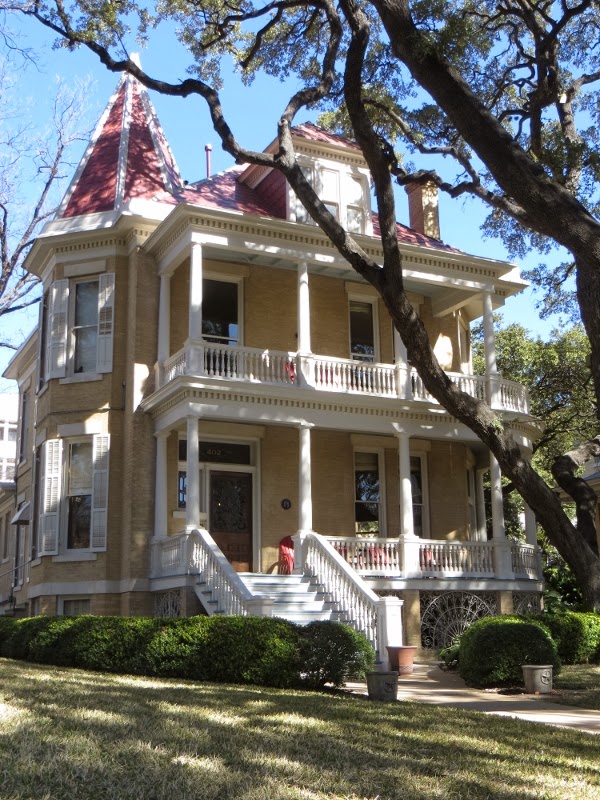 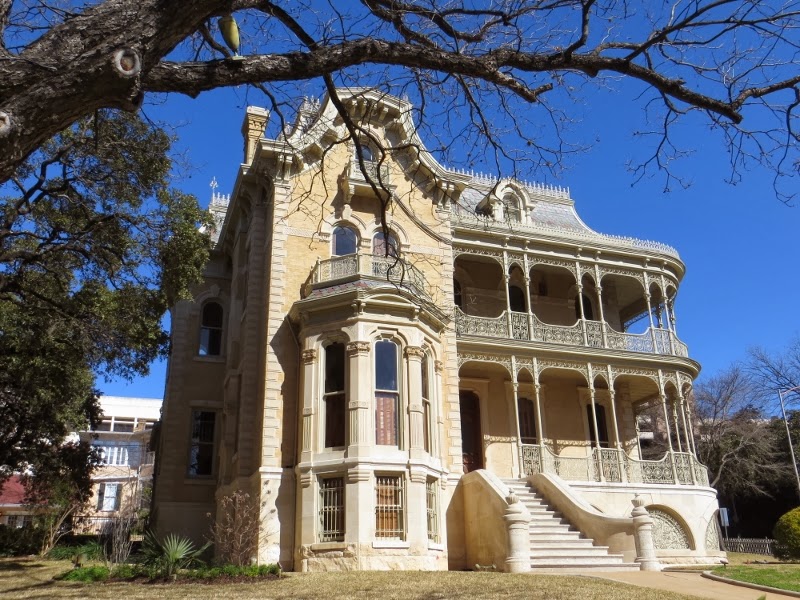 Along the way we stopped for lunch at City Hall Cafe at the corner of 2nd Ave. and Lavaca. The food was remarkably fresh and good. From the cafe it was a short walk back to our start point.


The following inflatable structures caught our eye. The lines were long to enter. We had no idea what they were for so I looked it up. Fascinating! Miracoco Luminaria 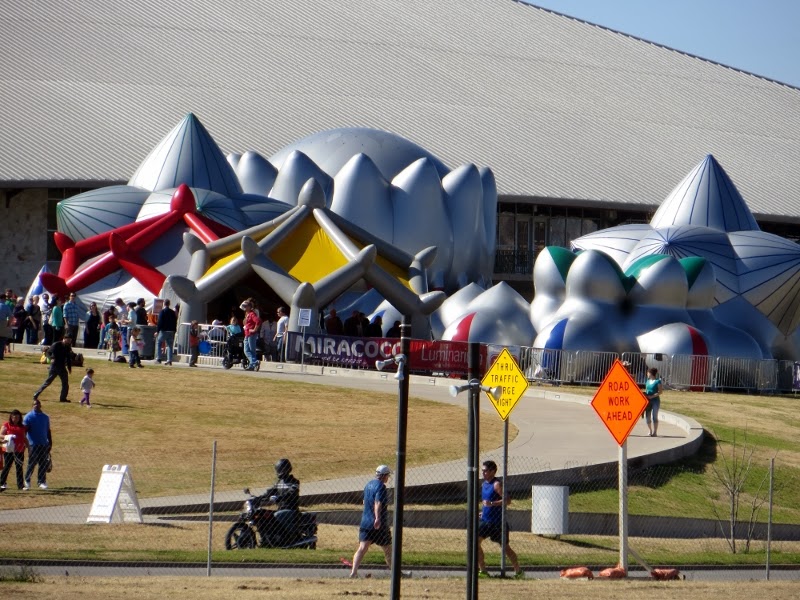 Once back at our start point, Susan needed to use the facilities. Bob and I were ready to hop in the car and take Susan to Sugar Mama's Cupcakes for her birthday cupcake. We walked around the corner of the motel. Screech! Put on the brakes. "Isn't this where we left the car?" No car, just empty space. Oh, no! The car got towed!

Into the front desk we trudged only to find out there were signs posted on the door and at the front desk saying a parking pass was needed for guests from Jan. 24-27 due to a tattoo convention at the Convention Center across the street. The sign on the front door could barely be seen because their door has dark shading on it and we didn't go to the front desk because the walk box was in a side area off the lobby. Sigh.

We explained our dilemma to the front desk clerk who called out an assistant manager. The assistant manager apologized and called the towing company asking them to release our  car because we were guests of the hotel. She told us it would save us $193!

Our next move was to hire a cab to drive us to the tow yard about seven miles away through downtown traffic (luckily it was Sunday). Twenty dollars lighter in the wallet, we claimed the car. J&J Towing honored their agreement with the assistant manager and did not charge us for towing and storage. The bill said, "No charge." Lucky ducks, that's us!

Next up, Sugar Mama's Cupcakes. When Bob and I did a different Volksmarch in Austin last year, we literally stumbled upon this delectable den of cupcake sin. We all ordered our just desserts and bought two extra cupcakes to take to the desk clerk and assistant manager at Extended Stay America to thank them for their help. As I was getting ready to pay for the cupcakes, the cashier said, "I'm only charging you for three cupcakes. The two cupcakes for the hotel are my treat. I'm paying it forward to someone who did a good deed." Impressive! 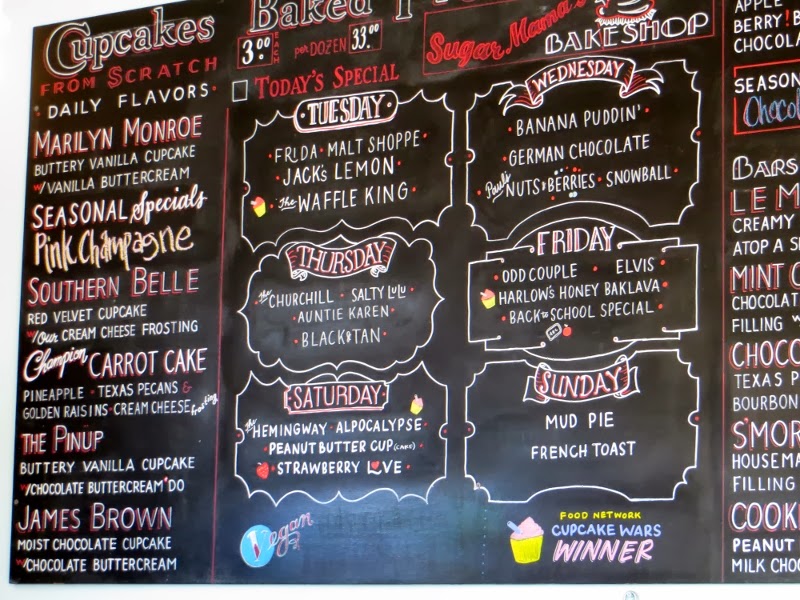 The cupcakes didn't last long. We ate them at the bakery. We then took the other two cupcakes to Extended Stay America. I hope they enjoyed theirs as much as we enjoyed ours!

But wait! The day isn't over yet. All of us wanted to see "American Hustle." Susan and Bob checked movie times (on their smart phones) for locations on our drive home. The movies just weren't playing at a time we'd be passing through. Finally, Bob found a movie that started at 4:15 p.m. in San Antonio. It was a long shot to make it there in time. We arrived at 4:30 p.m., bought tickets, headed straight for the theater and the movie was just starting.

Movie review in the next blog. Stay tuned.

Travel Bug out.
Posted by TravelBug-Susan at 10:18 PM 9 comments:

Last night it felt like someone left the freezer door open, then turned on a power blower to make sure we had the full effect of the cold. And we're in South Texas. Can't even imagine what people in the North and Northeast are experiencing. I've heard the temps up north feel like -40° with wind chill.

Here's what we woke up to in San Antonio this morning...

In the two photos above you can see the effect of leaving our water spigot dripping all night combined with 35 mph wind gusts. The water sprinkled out over the grass creating "ice art."

The above photo shows how I had to dress up to "run the park" this morning. Running the park means taking the golf cart (with no side windows) to see if our guests checked out by 11:00 a.m. Temperature was 30 degrees.

Because our freeways were closed due to ice on bridges and overpasses in San Antonio, a rally staying in our park couldn't leave by 11:00 a.m. (of course no one was coming in either).

The rally's Wagonmaster headed out around noon to scope out the roads. The roads must have opened by 1:30 p.m. because about 18 RVs pulled out in staggered groups of three or four starting around that time.

(Note: The people who REALLY deserve credit in our park during the freezing weather are our maintenance guys who go out to repair broken pipes, disperse puddles of water with a blower, unblock sewers, rake up leaves, and clean up broken branches, as well as the guys who pump propane. Thank you, thank you, thank you!)

Tonight's temperature is predicted to be 30°. Then it warms up for Saturday and Sunday. On Monday night another cold blast is coming that is predicted to last until Thursday, Jan. 30. No forecast beyond that for now. I look forward to more normal winter temps of 60-70 degrees.

As usual the fur-kids are adorable. Here they are...

It's getting cold in here. Must trundle off to bed.

Travel Bug chillin' out.
Posted by TravelBug-Susan at 10:16 PM 23 comments: