First, Happy Birthday to my sister, Jan. She is celebrating with mom on a four-day trip to Redwoods National Park and Eureka, California. Have fun! Wish I was there too.

That sounded like a better plan, so I sleepily said, "Mmmph" (translated as "yes"). Up at 7:00 a.m., ate breakfast, but no shower because we would be sweaty and hot on the trail.  Shower later.

It's a six-mile drive to the park and we started walking by 8:00 a.m. Temperature 74 degrees and humid with a marine layer of clouds which would soon burn off.

The park was a complete surprise to me. I had no idea we had such a nice park so close to us, and it's shady! We ended up walking approximately 4-1/4 miles round trip. Bob did very well until we reached the parking lot at the end. Then he felt very tired. I'm glad we were back at the car so he could cool off in the air conditioning. Temperature was close to 90 and very humid.

Once again, the mantra is true, "You never know what you're going to find or learn on a walk." But more on that later.

Here are photos from our walk this morning... 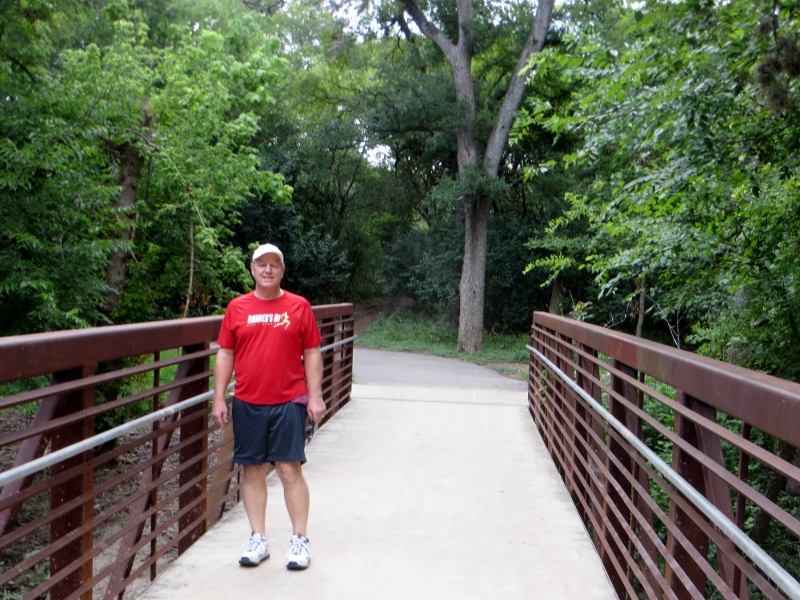 Below is a fruit I've never seen before and had no clue what it might be. Google search can find almost anything. What we saw is an Osage orange (Maclura promifera), also known as a horse apple or hedge apple, a member of the fig family. Some people say don't park your car under one of these trees. I wouldn't try eating these fruits; they're hard and heavy. Squirrels might eat them after they have ripened enough to rot which makes them easier to open. Horses and livestock sometimes eat the fruit.

The reason for the hedge apple moniker? During Roosevelt's "Great Plains Shelterbelt" WPA project, launched in 1934 to prevent soil erosion in the Great Plains states, osage oranges were one of the main trees planted (about 220 million). (I learned the above from Jim Conrad's "Naturalist Newsletter.")

Here's something else we knew nothing about in our day-to-day lives: United States Auto Club's (USAC) Quarter Midget Racing. Comanche Park in San Antonio has the Lone Star Quarter Midget Association (LSQMA) racing track. Bob and I had no idea what quarter midget racing might be, so I Googled that too. Following is information from their website.

USAC Quarter Midget Racing is a family-oriented sport that involves racing in specially prepared cars. The cars, rules and safety procedures are specifically designed for kids. They race on oval tracks approximately 1/20 mile. Children ages 5 to 16 years can race. Safety features on the cars include full roll cages, multi-point seat harnesses, full face helmets, and other gear. According to the LSQMA website, this sport has fewer injuries than little-league football.

A Quarter Midget car is a .25 scaled-down version of an actual midget racer. The cars are built around a tubular frame and are fully suspended with springs or torsion bars and shocks. The bodies are fiberglas. Surrounding the driver is a chrome-moly roll cage and nerf bars. The engines are single cylinder and are manufactured by Honda, Continental, Briggs 7 Stratton, and Deco. In stock configuration they produce between 2.5 and 4 horse power.

In the photo below you can see flattened grasses from the flash flood 1-1/2 weeks ago. This trail would not be a good one to walk if there is a big rainstorm predicted or happening! 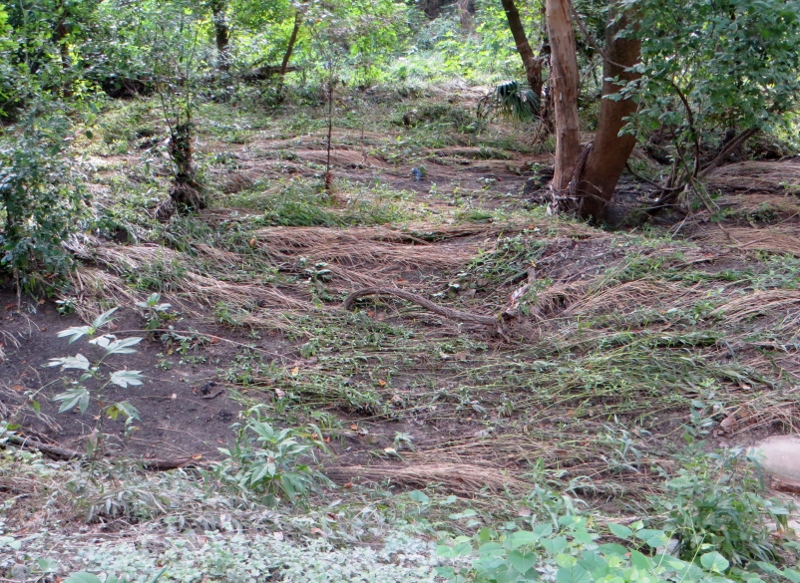 Our walk was interesting and fun. It got rid of my "early morning grumpies." Thanks, Bob, for sharing this good walk.

As I'm typing my blog, the kitties have decided they BOTH have to be next to me. They have taken over the top of the box and are adorable. I HAVE to share some pics of the fur-kids. It's been a while since I've put their furry mugs in my blog.


Have an awesome week. Travel Bug out.

Posted by TravelBug-Susan at 5:58 PM 7 comments:

Bob got more than he bargained for - Mon., July 21

To hear him tell it, he slept through it all and didn't feel a thing. Oh, except the shots for the anesthesia. Apparently because he's a big guy, they had to keep sticking him with needles to give him more anesthetic. He said he was ready to kick a nurse. (Sorry Shane, Rosemary, Rosemarie and Vickie.)

When I dropped Bob off at the hospital this morning for his routine catheter ablation, all was well. He felt great, said he didn't have atrial fibrillation. I went to work at the insurance office confident he would be all right.

At 10:45 a.m., I received a phone call from Bob's doctor (never a good sign). The doctor told me Bob was in atrial fibrillation. Because of that they could not do his catheter ablation. (If he had been in atrial flutter or normal sinus rhythm, they could have done the ablation.)

They planned to do an echocardiogram to see if there were any blood clots. If no blood clots, they would proceed with the ablation; otherwise there was too much risk of Bob having a stroke.

About 11:00, I received another call from the hospital. Two nurses had to get my consent for Bob to have two different surgeries: a TEE (transesophageal echocardiogram), and if that showed no clots, they would do a cardioversion on his heart to shock it into normal sinus rhythm (at which time they would do the originally scheduled catheter ablation). After asking about risks and listening to the answers, I gave my consent. I was told they would do the cardioversion about noon and then, if all looked good, he would have his ablation at 3:00 p.m.

From 11:00 a.m. until late afternoon, I didn't hear another word from the hospital. It was definitely a time of worry for me. At least I was busy at work so I didn't have too much time to dwell on the surgery, though I was a bit distracted as the afternoon wore on.

Finally, at 4:30 p.m., an RN called to tell me Bob's surgeries were done, he was in the recovery room, and all looked good. When I left work at 5:00, I drove to the hospital and walked into the Cardiovascular Area recovery room just as Bob woke up. What timing! He was a bit sleepy and groggy, which is to be expected.

Calls were made by me to Bob's mom, my mom, and Bob's Aunt Sally; and I texted Bob's son, boss, and bookkeeper to let them know how Bob was doing. Bob called his mom later in the evening when he was more coherent.

About an hour after I arrived in the recovery area, a room opened up in the Cardiovascular Unit, so Bob was transferred there. His nurse told us the hospital cafeteria closed at 7:00 p.m. Bob ordered his dinner at 6:50 p.m. He hadn't eaten since 10:00 p.m. the night before and he was hungry. I zipped down to the cafeteria for a tuna sandwich for my dinner which I brought back to his room to eat.

Bob's dinner came at 7:30 p.m. and I fed it to him. He can't sit up, stand up, or move his legs at all until around 10:30 p.m. The nurse came in about 8:30 to have Bob verbally answer a questionnaire. Bob was cracking jokes with the nurses, said he was trying old material on a new audience. I headed out about 9:00 p.m. Bob was reading his book and said he'd probably nap some more.

In case you're wondering about the orange wristband...it indicates he's allergic to shellfish.

I am relieved he is doing well and the surgeries helped put his heart in a normal sinus rhythm. We'll see how he fares in the next couple of weeks.

Thank you all for your thoughts, prayers and blessings. I know that you, in combination with Bob's positive attitude, helped him through this challenging time.

I will be back at the hospital tomorrow morning to hang out with Bob and listen to discharge instructions. Bob cannot drive for the next couple of days so I will be his chaffeuse or chauffeuress.

I hope you're having a good Monday.

P.S. I forgot to mention our son, Randall, hyperextended his knee on a pillow bouncer while trying to emulate some of David Lee Roth's (Van Halen) moves.

Across the street from our RV park is a city bus stop. For $1.20 per person each way we can take the bus into downtown. Very nice not to have to deal with traffic, pedestrians, expensive parking, and construction. The bus dropped us off one block from the museum.

As we waited in line to buy our tickets, "Buffalo Bill Cody" walked in looking just like the original. People asked him to pose with them for photos and he kindly obliged. With our San Antonio Quick Guide coupons we saved $2 each off admission to the museum(s), making it $16.99 per person. (Steep in our opinion after touring the museums.) 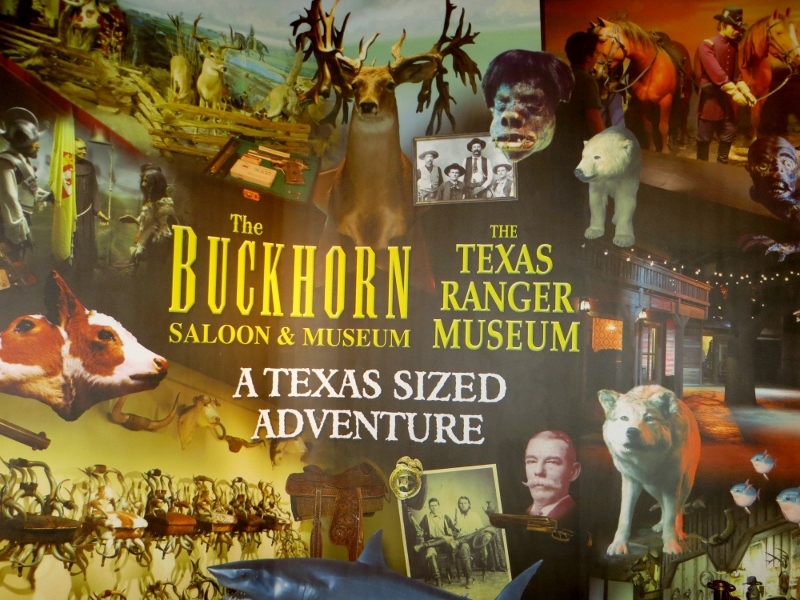 The Buckhorn Museum collection includes hundreds of trophy animals throughout. Personally, I'd rather go see these majestic animals in the wild. However, I realize not everyone can do that, including us. The animals in this museum have been in the collection for many years. In fact the museum has changed owners and locations a few times in its history. 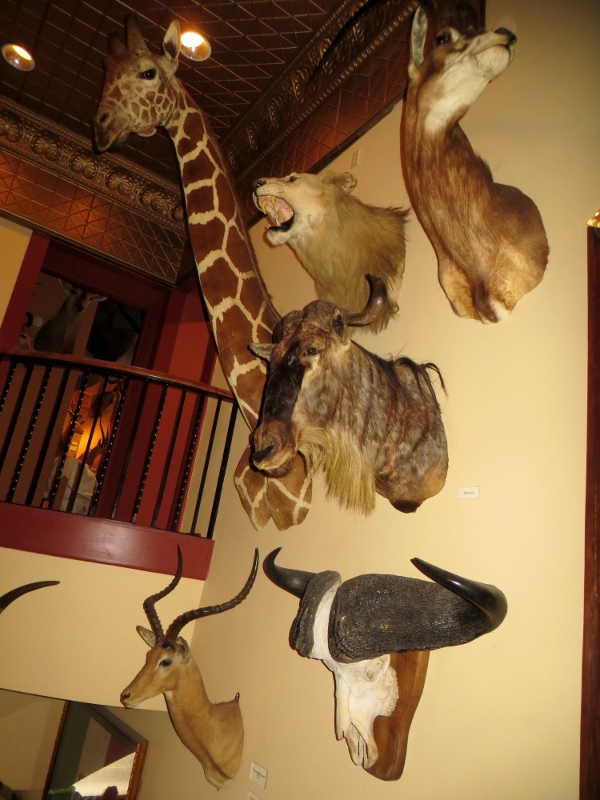 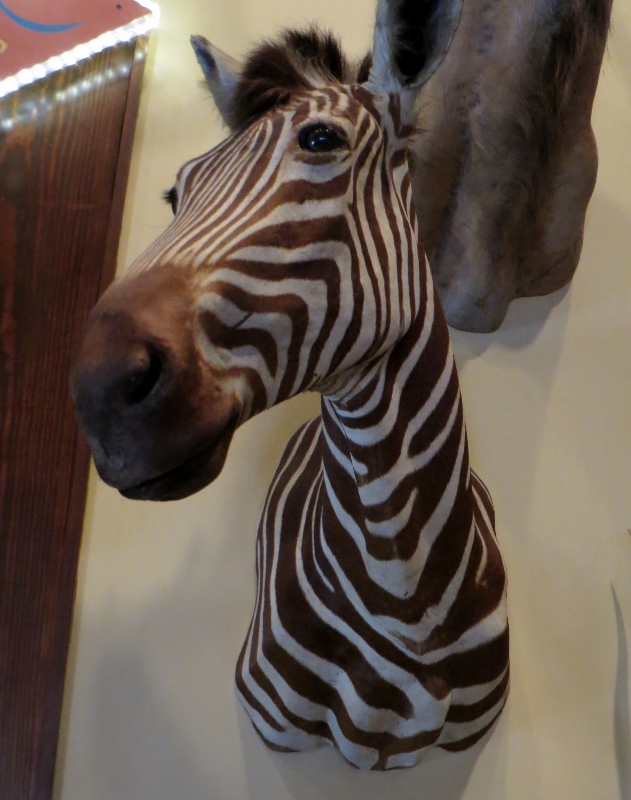 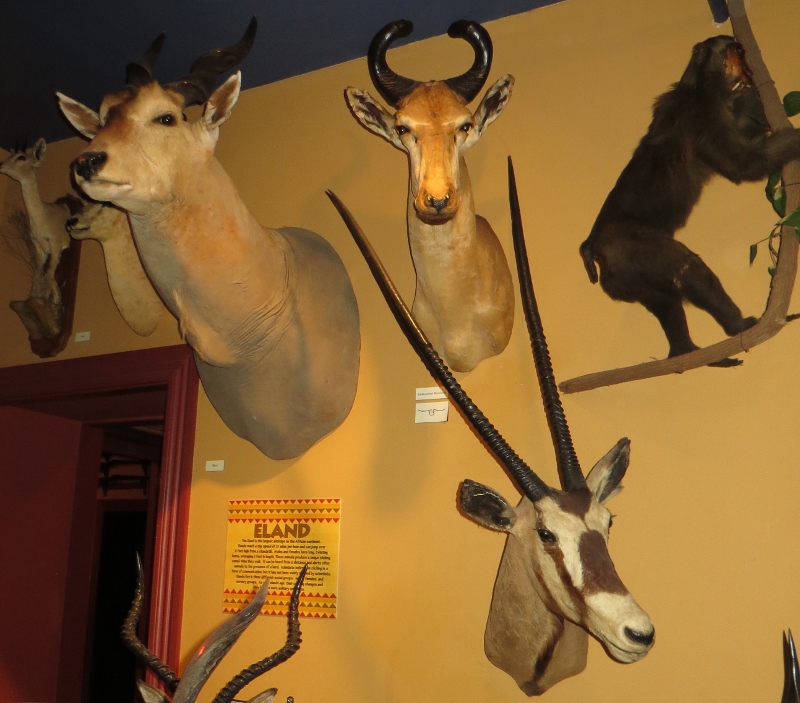 I was quite taken by the matchstick church below. Built by Wilfred Winters using 1500 boxes of matches (approximately 50,000 matches) over 18 months, it is believed to be a
montage of three San Antonio historical sites: the San Fernando Cathedral, Church of the Little Flower, and Immaculate Conception of the Oblate Order.

Part of the museum was like a circus sideshow. In fact, there's an exhibit in the museum relating how P.T. Barnum of Barnum and Bailey Circus got his start. Above is an exhibit with real shrunken heads from one of the island nations in Indonesia. You could read the whole description of how to make the shrunken heads.

Parts of the museum were oddities like you would find at a roadside attraction. Below, Bob appears to be perfectly comfortable standing sideways. 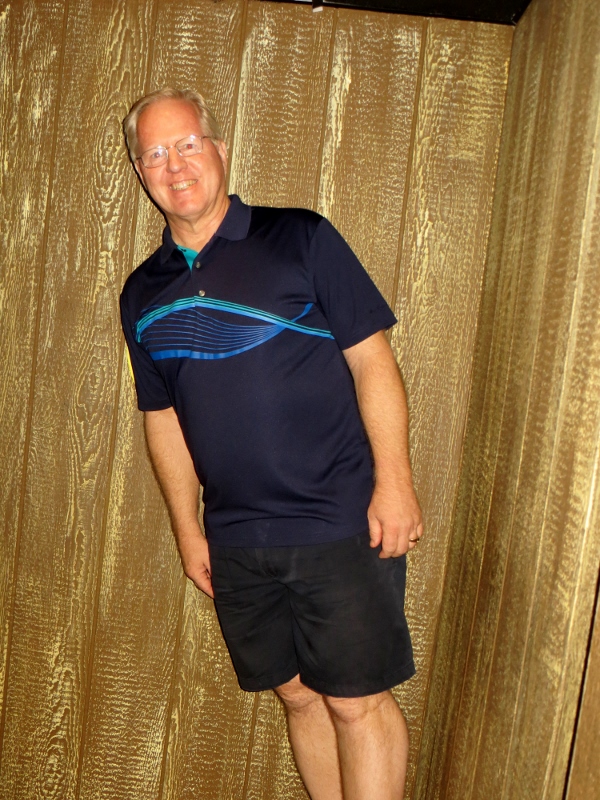 Bill Negley, a Texan, was the first archer to collect all five African big game animals - elephant, rhino, lion, tiger and Cape buffalo - with no rifle back up.

I found the rattlesnake rattle art to be quite fascinating. Enlarge to read about how all the rattles were acquired. 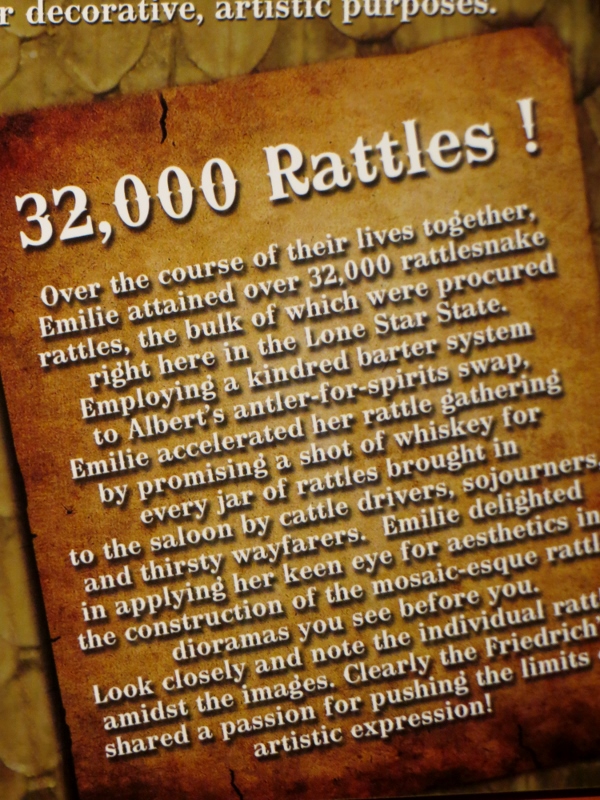 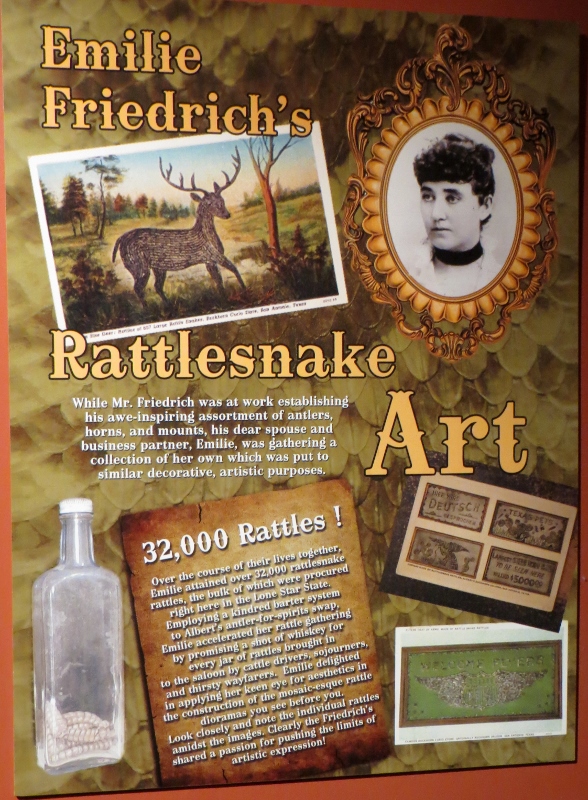 Below is art made from 637 rattlesnake rattles. This was given as a gift to Theodore Roosevelt in 1898.

The Buckhorn Museum is on the second floor of the building. There are landings where you can look out over the restaurant and all the trophies lining the walls.

The following is quite unique. Irish Elk have been extinct for a long time, but look at the size of those antlers in the second photo below! 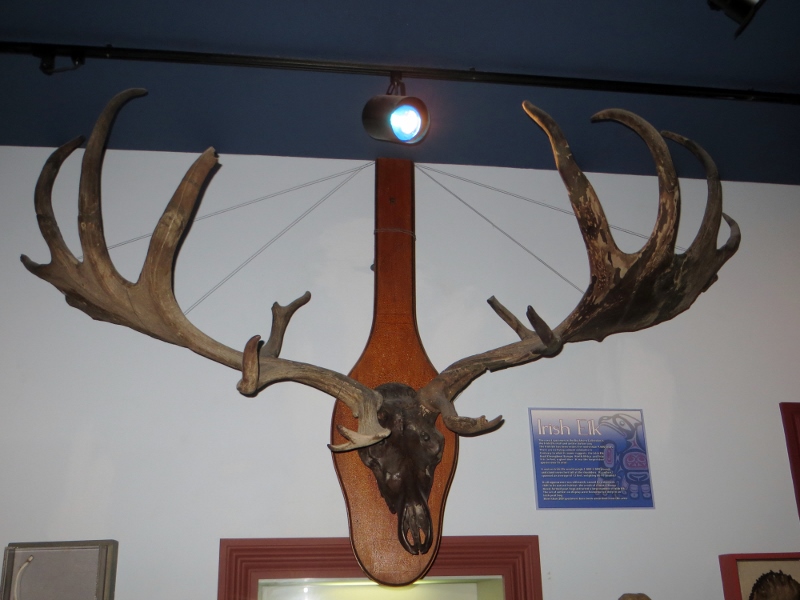 And then there were fish... 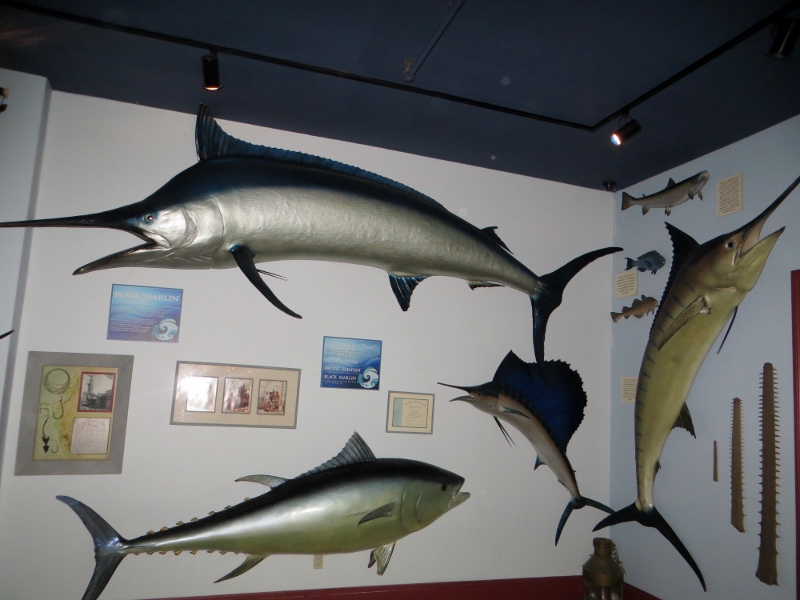 After we finished in the Buckhorn portion of the museum, we made our way to the first floor Texas Ranger Museum. Most of the displays were about individual Texas Rangers; my favorite was Ranger Jack Hayes who was the inspiration for Louis L'Amour. Louis L'Amour's book based on Ranger Hayes became the impetus for The Lone Ranger TV series. "Hi ho, Silver, awaaaaay!" 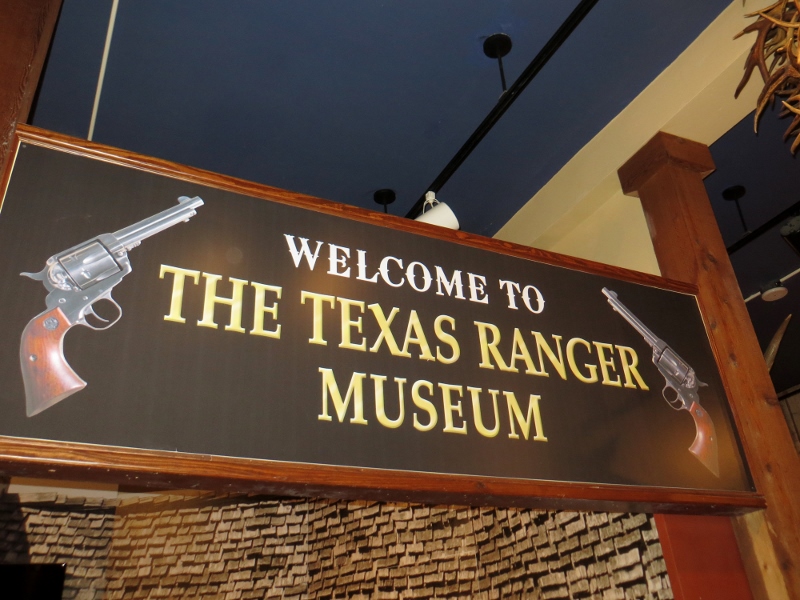 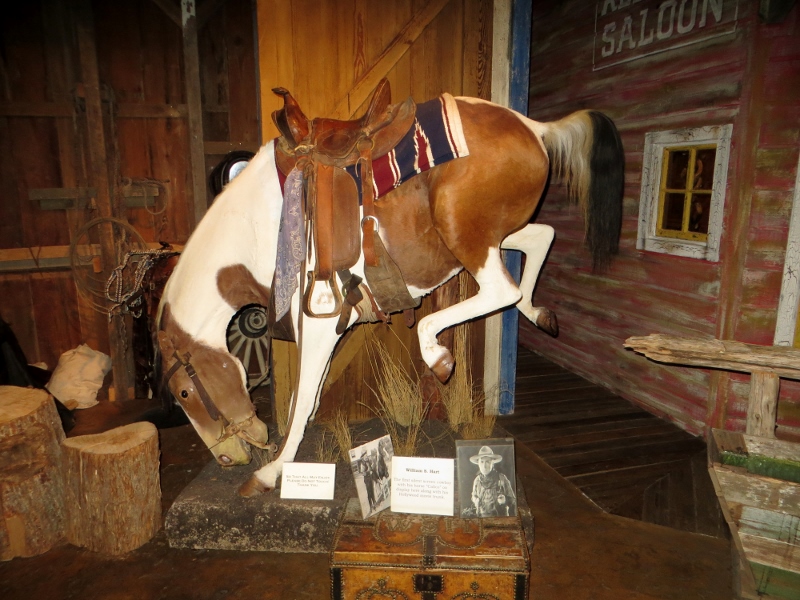 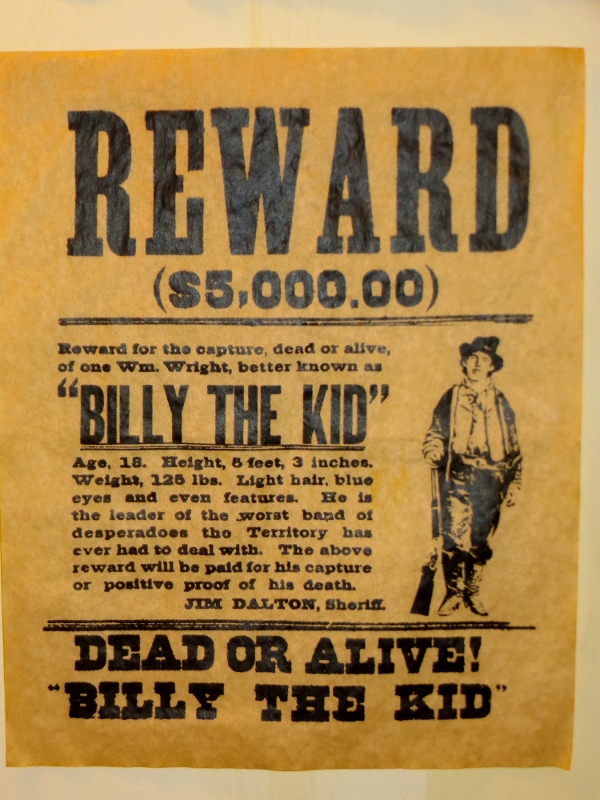 That was our museum date and we have now checked it off our list. Been there, done that, don't need to do it again.

In the heat of the afternoon, we walked around downtown for a few blocks, then made our way to the bus stop. The bus arrived to take us home within ten minutes.

Posted by TravelBug-Susan at 2:09 PM 2 comments: