After my fall yesterday, I slept well overnight. This morning, I'm game to try the 5k Bertha Falls Trail in Waterton-Glacier International Peace Park. Again this morning, my pelvis/coccyx hurt when I climbed into the truck. I was fine for the 40-minute ride to Waterton Townsite. I still couldn't tell EXACTLY where I hurt, it was more a generalized hurt around my tailbone.

The weather today was perfect for hiking. My allergy to cold temperatures usually makes me dress warmly. Today, that worked against me. I had on long pants, a Rugby shirt, and warm socks. I did not wear a T-shirt under my sweatshirt. I also did not take my windbreaker.

The day was mostly cloudy and we started the hike at about 60 degrees. The first part of the trail was shaded in the forest.

When we got to the exposed slopes, the sun came out. That, in addition to the steepness of the trail, really warmed us up. The cold water we carried tasted excellent.

I found that going up steep inclines caused quite a bit of pain in my tailbone region. The hike took a lot out of me because the fall put my body through quite a bit of stress yesterday.

The spectacular scenery helped take my mind off the aches and pains. We climbed steadily, and sometimes moderately steeply. Both of us thought the trail was going to be easier than it was.

In the following two photos, you can see how forested the eastern side of the lake is. The fire did not impact the east side much.

The west side of Waterton Lake is where the 2017 fire came through. You can see that most of the trees here are burned. That, of course, makes it easy to see the spring freshets and waterfalls coming off the high mountains.


We continued up the trail and came to a viewpoint of the lake and mountains. Just beyond that, the trail split. Heading south would take you to the U.S. border.

As we continued up the slope, we came to an area where the rocks were interesting colors - light yellow and blue.

We just kept going and going. There's a waterfall up ahead somewhere!

I thought we had made it to Lower Bertha Falls. Since we had never been here before, we debated if this was really it. We had another kilometer to go according to our pedometers.

Bob didn't think this was big enough to be Little Bertha Falls. So he went up the trail to see if there was another waterfall close by. He no sooner went around a corner 50' ahead when he frantically motioned for me to follow him.

When I got around the corner, lo and behold, there was Little Bertha Falls. It's certainly NOT little in my estimation! This is unique in that the water at the bottom of the falls funnels through a V-shaped rock trough.

Yay, we made it. We spent quite a bit of time here absorbing the wonderful negative ions. Unfortunately, at some point, we had to head down.

When we were almost back to the trailhead, we encountered this lovely doe. She was much more interested in eating plants than in us. We walked past within two feet of her! 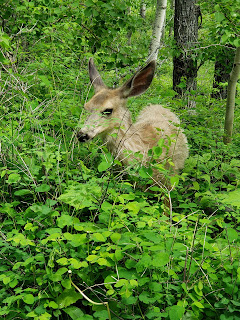 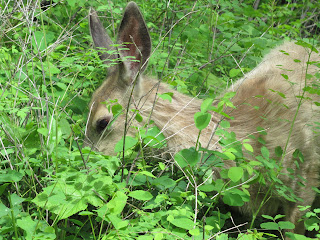 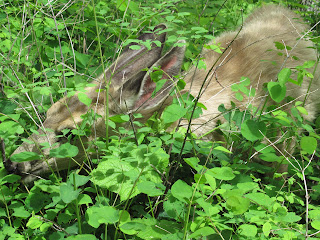 From Waterton, we headed back to Cardston where we will have lunch and do two 5k Cardston town Volksmarches.

It was nice to finally see a reflection in Middle Waterton Lake after a few days of high winds. For our last day in Waterton-Glacier International Peace Park, we considered this view a nice send-off.

After lunch, we walked over to the Remington Carriage Museum to start our 5k Temple Volksmarch. Normally, the walk starts at the Husky Station, but we could walk to the carriage museum and start the Temple walk there.

I wasn't able to take pictures outside the museum yesterday because it was pouring rain, so I took them this afternoon. 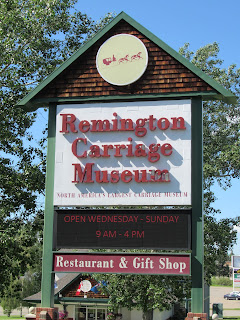 I forgot to mention yesterday that the Remington Carriage Museum offers 15-minute carriage rides in the summer months. The rides go along Lee Creek on a carriage road. 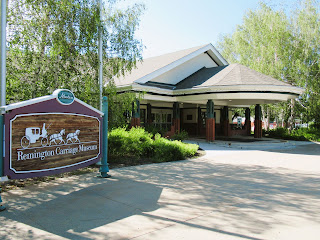 I also forgot to mention that Don Remington did a lot of the restoration work on the carriages himself, 48 of them to be exact. So, he started the museum, collected the carriages, wagons, buggies, and sleighs, plus did a lot of the restoration work. This was his passion.
A life-size bronze statue of Seabiscuit and his jockey, George "the Iceman" Woolf, was commissioned by Cardston ranchers Jack and Ida Lowe. The artist is Don Toney. The sculpture sits outside the stables at Remington Carriage Museum. The statue is titled, "So long, Charley!", the phrase reportedly shouted by Woolf as he and Seabiscuit defeated War Admiral at Pimlico on November 1, 1938. Woolf rode Seabiscuit in place of his regular rider, Red Pollard, who was injured. George Woolf was a native of Cardston, Alberta.

The following three plaques are around the base of the Seabiscuit sculpture. 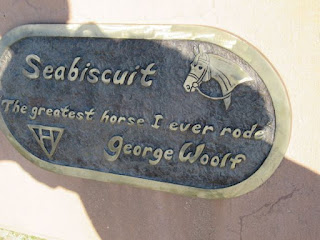 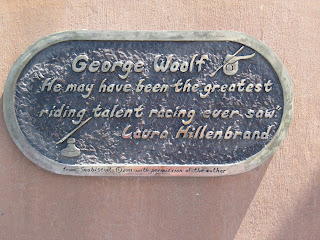 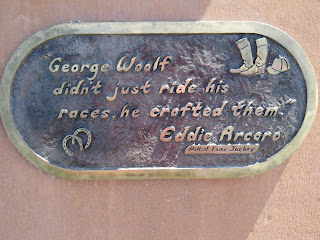 There are separate bike paths for people, except for the shared bridge over Lee Creek.
From the carriage museum, we stopped briefly at the Visitor Information Center and picked up a map of town (in case we got lost). Art in the visitor center was fun to look at, too.

After a left turn on Main Street, we learned about another famous Cardston citizen: Fay Wray of King Kong fame. There is a historical marker and a run-down fountain. 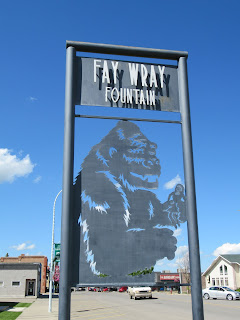 The fountain was old, had trash in it, and wasn't working. It wasn't worth a picture. 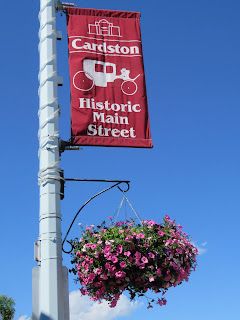 Zina Young Card was the founder of the settlement here and local leader of The Church of Jesus Christ of the Latter-day Saints. You can read more in the history markers. 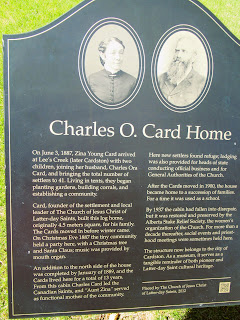 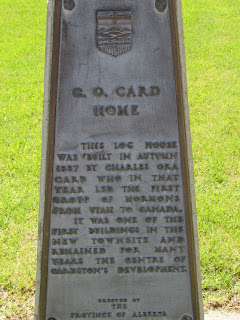 From here, we walked through part of Main Street and then turned to go up a hill into a neighborhood. There was an excellent view of downtown Cardston.
We crossed a creek next to downtown and it looked like a beaver had been busy making a dam. We saw evidence of beaver-chewed stumps next to the river farther upstream on our 2nd 5k walk. 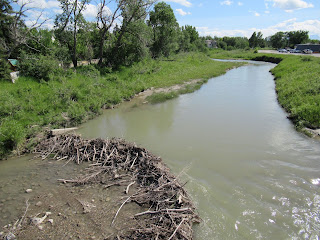 After finishing our first 5k (which was the 10k Temple route shortened to a 5k by not going to the Agridome or the Temple), we did a second 5k on the bike path. It started at the Remington Carriage Museum, we walked along Lee Creek all the way to the Golf Course cart bridge and back to our campground.


As we walked along Lee Creek, three teen-aged boys invited us to go swimming in the creek. We told them no because the water was too cold. (We're talking probably snowmelt coming down from the mountains.) They assured us that the water was fine. And what kind of Cardstoners were we anyway if we didn't want to swim in the creek.
We told them, "We're not from Cardston."
Then they wanted to know where we were from. "San Antonio, Texas," we replied.
It was very hard to keep up a conversation with them. They were in the creek and we were a little way away on the bank, so we were yelling back and forth. Finally, we told them to have a good time and we continued on our way. They were very friendly.

As we passed under the roadway bridge, Bob told me he had seen an owl here. Guess what? I think this is where the owl lives!

Going back under the road bridge, we found the owl again. This time it was facing away from us with its head swiveled backward!! Wow!

We returned to the campground and called it a day. When we finished both Cardston walks, we had 10k on our pedometers. That makes it a 15k day including Lower Bertha Falls.
I did pretty well considering my fall. The only time I hurt was when we were going uphill. The pain seems to be localizing in my lower left pelvis. I'm going to guess I may have a hairline fracture. There's nothing that can be done except to let it heal. I've heard it can take 6-8 weeks to completely knit back together. As long as I'm mobile, I'm fine with it.
I only take the Tylenol when I think we're going to go uphill or up stairs. I have to avoid lifting anything heavy from the ground, because that really hurts.
Tomorrow, we head to Calgary. We have enjoyed our stay in Cardston. The Lee Creek Campground is very pretty!
Posted by TravelBug-Susan at 8:30 PM No comments: