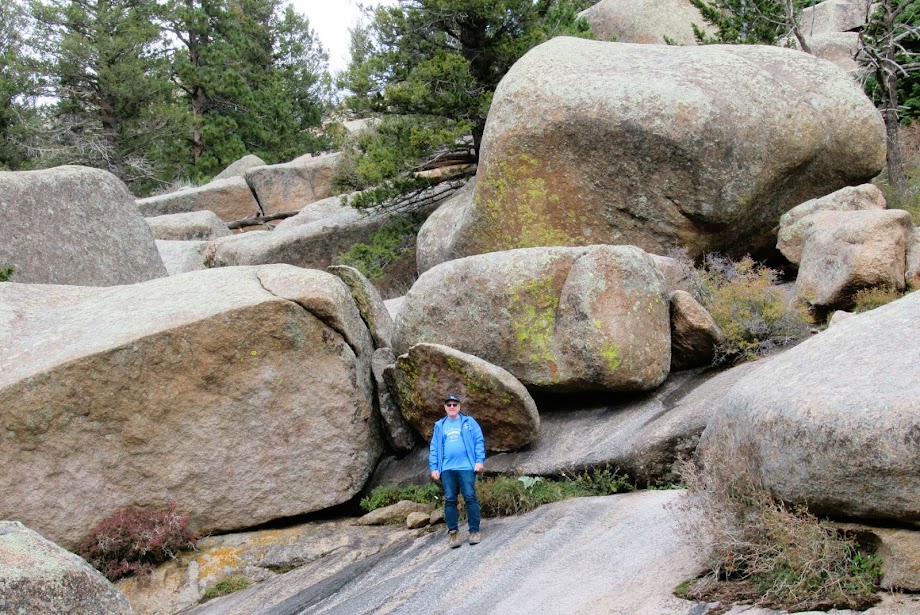 Susan Medlin and I are coming to the end of our Missouri walking weekend. It's been interesting and we're still learning about our country's history. Today's two walks take place in Marthasville and Montgomery City, Missouri.

Our early walk was a 6k out and back on the Katy Trail in Marthasville. After the 5k rails-to-trails portion of the walk, we added 1k by exploring the old part of downtown.

The trailhead at this trail station had a wealth of history to read on the signboards. I took photos of all the historical markers to read later so I wouldn't hold up our walk. 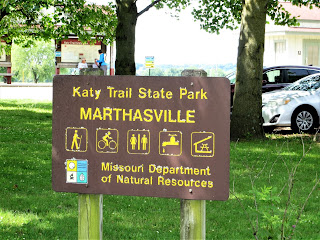 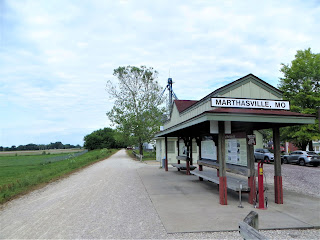 Whenever we think of the Lewis and Clark expedition, we generally remember that they used 55-foot-long keeled boats to go up the Missouri River. Originally, Clark had the keeled boats constructed in Pittsburg to be used against the uncommonly rapid currents of the Lower Missouri River.

However, upon reading the historical marker, I learned when Lewis & Clark made it to this area, both captains agreed that the large, awkward, keeled boat no longer worked for them. While they were at the La Charette, Missouri, trading post, Clark admired the Canadians' boats. "These 'schenectady' boats, as Clark termed them, were wide in proportion to their length, unlike the keelboat, which had a round bottom. They were smaller--30 feet long by eight feet wide with pointed bows and sterns and flat bottoms. Because of this design, they were not prone to rolling on their sides when grounded on sandbars, which was a problem that constantly plagued the keelboat. And unlike the keelboat, which required 20 oars, these boats needed only six oarsmen." (NOTE: The above quote is from the historical marker.)

Other history located at this trailhead includes Daniel and Nathan Boone, the powerful Teton-Sioux Indians who blockaded the Missouri River farther north, the farthest west settlement of whites at La Charette, and the Missouri-Kansas-Texas (MKT) railroad. If you love bike riding, this is a good spot to spend some time.

Off we go on our 5k Katy Trail walk and then 1k in Marthasville, Missouri. 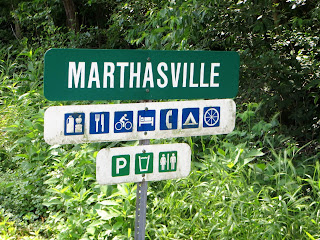 Next, we scoped out the old part of downtown Marthasville. They have a couple of cute parks, old houses, and some murals. 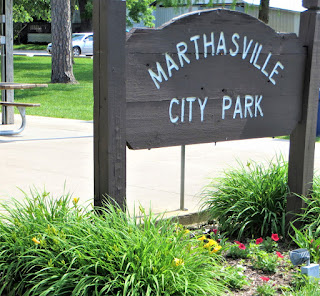 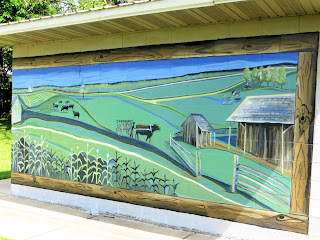 Before our second walk of the day, we stopped for lunch and then made our way to Montgomery City, Missouri. The walk started at the Public Library which was closed because it was Memorial Day. Susan Medlin did the 10k walk and I opted for the 5k. I only got lost twice. LOL.

The library was next to the railroad tracks which were very busy with freight trains. At the start of the walk was a beautiful mural of Montgomery City. 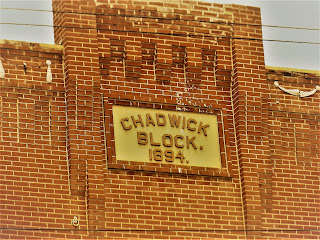 Then, we walked along the main thoroughfare of Montgomery City which parallels the railroad tracks one block away.

I got lost turning off the main highway. Our instructions mentioned a street name, but there was no name on the street. The map showed a Dairy Queen near where I was supposed to turn, but there was no Dairy Queen either. If they would have just shown where the fairgrounds were on the map, I would have found the turn-off. I found out later that Susan Medlin had also been stymied by this turn.


One thing I love about many of the small towns we've visited is the lack of fencing and the huge yards.

When I walk, I'm always looking for animals, flowers, pretty houses, architecture types, fountains, unique yard art, etc. I'm partial to dragons, gargoyles, and griffins which I don't find very often. However, I hit the bonus today at one home.

I got lost one more time on the walk when I met up with two other walkers, we got to talking, and I soon noticed I had turned the wrong way a block ago. I went back and went the way my directions showed.


I took my time reading the historical markers in front of the courthouse.

As I was walking away from the historical markers, a policeman in a patrol car pulled me over. Ha ha, very funny. He said he saw a lot of people around town and wondered if we were doing a treasure hunt. I told him, "No," and explained we were doing a walk and told him all about Volksmarching. He was very chatty and said if I like history he could tell me more. He proceeded to tell me the whole history of the area. He must have talked for 15-20 minutes. He was a very knowledgeable guy. It's the first time I've been stopped by a cop in my 30 years of Volksmarching!
I was close to the end of the walk, so I beat feet back. Along the way, I took a few more photos. 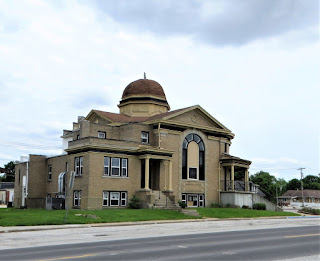 When I returned to Susan's van, I knew I would have to wait for her to finish her 10k. I just chilled for about 1/2 hour. When she finished, we started our 252-mile drive to Carthage, Missouri, where we would spend the night at Quality Inn & Suites. We hit rain on our drive to Cathage, and lots of road construction.
After check-in at our hotel, we had dinner at Big Ben's BBQ restaurant across the highway from the hotel.

I am sold on Big Ben's BBQ. It's not fancy or high-falutin'. You order at the counter and they bring you your food. But, oh, the food. I had BBQ spaghetti. Let me tell you, I was very skeptical about ordering that, but the counter clerk said it was her favorite meal. Sold. I ordered it and I loved it! It was so flavorful. I may make spaghetti that way at our house!!
The whole Missouri counties walking weekend was great. I'm glad we went. Thank you to everyone who made it possible
Posted by TravelBug-Susan at 11:00 PM No comments: