Be still my beating heart. When the park ranger at the Discovery Center in Grand Teton National Park told me yesterday that the Cascade Canyon Trail is open, I was ecstatic. I thought it was closed as part of the upgrades to trails at Jenny Lake and Hidden Falls. The ranger said in order to get to Cascade Canyon, we had to park at String Lake and take the equestrian trail to Cascade Canyon. That is because all trails on the southwest side of Jenny Lake are closed for major renovation. The Jenny Lake Visitor Center is also closed. You cannot go to Hidden Falls. If you wanted, you could take a 0.6-mile hike to Inspiration Point from the equestrian trail. We decided against that.

On the drive north to String Lake parking area, Susan exclaimed, "Wow! Look at that!"

I said, "What?" thinking she had seen a moose or elk.

Oh, yeah, that's right. When we drove down yesterday all we saw were clouds. They were getting their first glimpse of the Grand Tetons.

Rushing water coming from String Lake into Jenny Lake made a great first impression. The volume of the water and the sound was sweet music to our ears.
The equestrian trail followed Jenny Lake's northwest side and was mostly level. After a mile, the trail ascended steeply. I was stopping to breathe about every two minutes. Keep in mind, our elevation was around 7,000+ feet.

Part way up the trail, a young lady named Victoria from Minnesota was hiking alone. We invited her to hike with us if she'd like. She stayed with us for quite a while.
In the photo below it is hard to tell but we had to walk through a stream. It wasn't very deep. In the middle of the stream was a trail sign pointing to the right, up a bank of snow and past big broken trees. No trail was in sight, so we followed the footprints of other hikers who went before us. 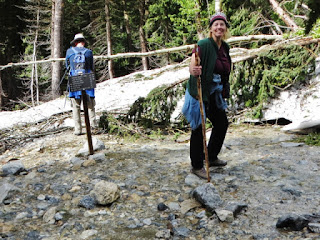 We found out later from other hikers that this "snow field" had been an avalanche (we don't know how long ago it happened). This is my title reference to a slippery slope. We had to be very careful with our foot placement so as not to slide off the snow field. Sticky wickets are some spiny plants that stabbed Susan's hand.
The attraction of the Cascade Canyon hike is the scenery. The Grand Teton range towers over you as you walk. Waterfalls cascade off the canyon walls. The grade of the trail at this point is negligible. We made lots of noise as we hiked in case any bears were lurking about. I think we scared them all away! 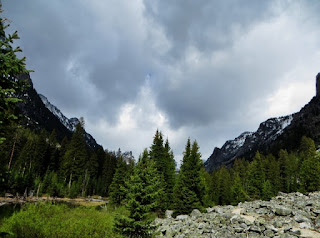 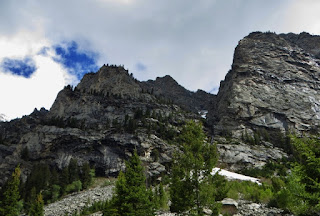 We hiked into the canyon until we had hiked long enough, then we turned around and headed back down the same way we had come in. A lot more people were coming up the trail as we hiked out. We were glad we started early!It was cooler AND less crowded.

Wildlife sightings today were limited to marmots, but we saw quite a few of them. I was disappointed we did not see any moose; moose droppings, yes; moose, no. When Bob and I did this hike in August 2012, we saw three moose on the hike.
Susan and Darren had headed back to the car. I was bonking, so I sat down for a couple of minutes, rested, and drank some water. I needed the port-a-potty, so I quickly finished up the last 1/2 mile back to the parking lot.

The parking lot was packed. Susan and Darren were raring to go because we had a seven-hour drive to Cheyenne, Wyoming ahead of us, and people were waiting for a parking place. It was 11:30 a.m. I wanted to change my shoes outside so I would have room to put on my comfortable shoes, but they insisted I do that in the van as we had to leave! Now!

Off we went, leaving the Grand Tetons in the rear-view mirror. The van nose was pointed first to Moran Junction and then on US 26/US 287 through the Bridger-Teton National Forest on our way to Dubois, Wyoming. Again, the scenery was stunning. I took photos from the back seat of the van, so they may be a little blurry. 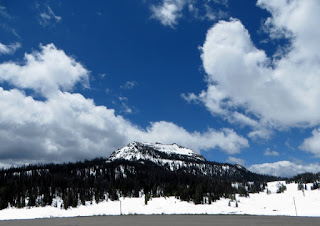 On the east side of the mountains, the landscape changed to painted hills with no trees. These hills lasted all the way to Dubois, Wyoming and beyond. 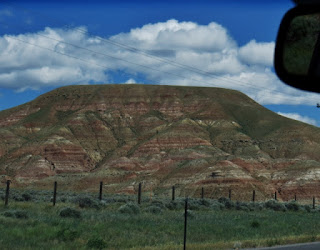 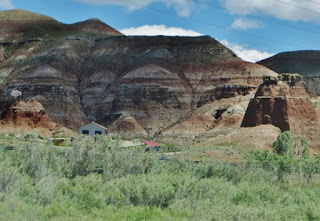 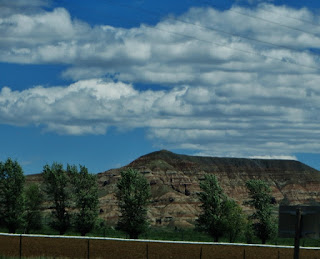 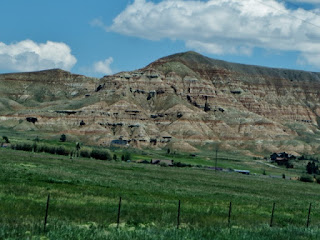 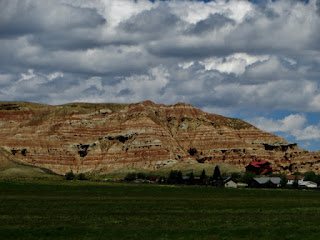 Remember how much we like to eat after we hike? Well, it was about 1 to 1-1/2 hours before we ordered lunch at Cowboy Cafe in Dubois, Wyoming. I had their lunch combo which is a burger, fries, and a piece of pie for dessert. Lunch was very good and service was great considering every table was full. I had to get my warm boysenberry pie a la mode to go so we could get moving again. 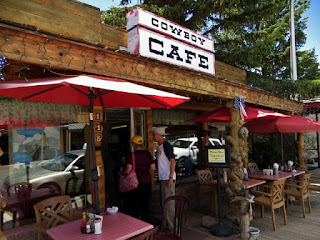 Lunch over, we were back on the highway. Again, there was more in the way of interesting geological scenery. 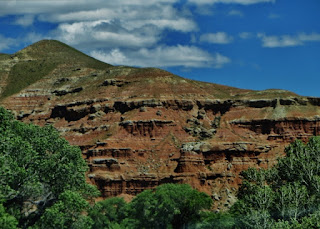 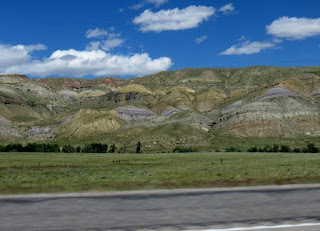 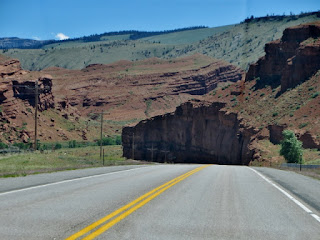 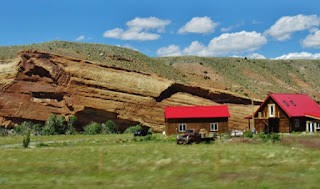 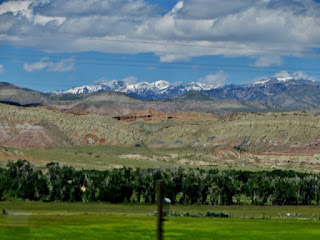 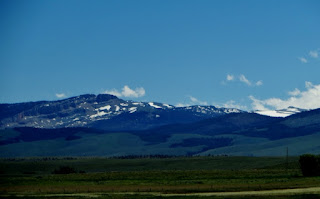 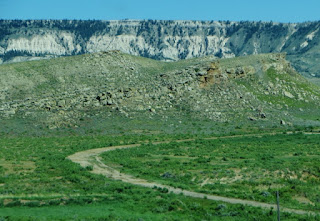 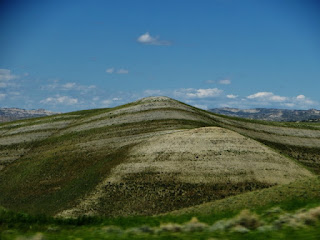 I kept oohing and aahing from the back seat. No one was listening. Darren had his headphone earbuds in and Susan was engrossed in reading a book. Oh, well, to each their own.

We crossed the Continental Divide again and were in an area called the Great Divide Basin. I have no idea what that is, so I had to look it up. Here is what I found on Wikipedia:


"The Great Divide Basin or Great Divide Closed Basin is an area of land in Wyoming's Red Desert where none of the water falling as rain to the ground drains into any ocean, directly or indirectly. It is therefore considered an endorheic basin, and it adjoins the Continental Divide in southern Wyoming. To the west of the basin is the Green River watershed, draining to the Gulf of California/Pacific Ocean; to the east is the North Platte watershed, draining to the Gulf of Mexico/Atlantic Ocean...

"The basin is a high desert dominated by sand dunes, bluffs and alkali flats. Flora and fauna include small trees in some ravines and the occasional shrub, along with many birds (e.g., sage grouse and pheasant) and pronghorn, mule deer, feral horses, and the occasional elk."

Our next stop was a rest area which had all kinds of interesting signs. If you'd like, you can enlarge and read them, otherwise disregard the next few photos. 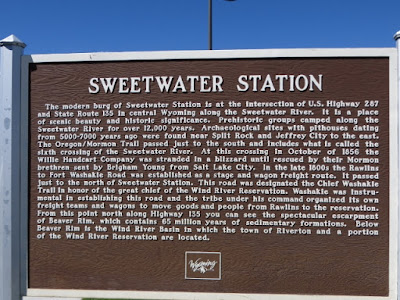 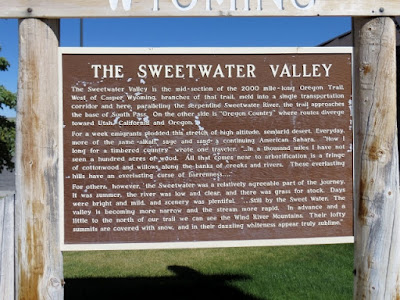 More cool stuff to look at on the way to Cheyenne. 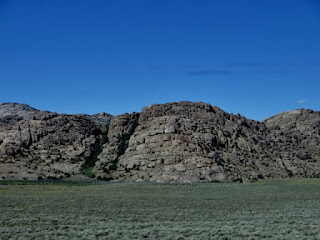 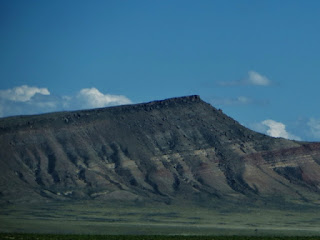 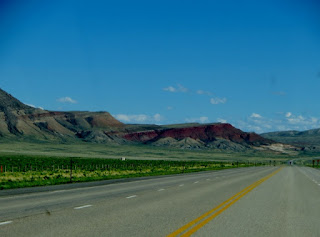 In Cheyenne, we stayed in officer's quarters at F.E. Warren Air Force Base, home of the 90th Missile Wing. Both Susan (Army) and Darren (Air Force) are retired officers. Our lodging was wonderful here. The rooms each had full living room, full kitchen, bathroom, and bedroom--all completely furnished. It was a whole apartment! Very nice, indeed! Thanks, guys.

Another jam-packed day has come to a close.

Posted by TravelBug-Susan at 2:16 AM 4 comments: