Thanksgiving with family in Oregon was wonderful. I will be doing a blog on that in the next day or two, but we are in Kailua-Kona, Hawaii, on the Big Island and I wanted to share the beauty with you.

Sunday, November 27, 2016: On Sunday morning, we were up at 4:30 am to get ready for our 6 am departure from Portland International Airport. My sister, Jan, came over to Mom's house and we all went to the airport together. On the way to the airport, we dropped off our Enterprise Rental Car in Tigard.

There wasn't much traffic on the freeway at that hour on Sunday so we made it to the airport quickly. There was not a long line at Hawaiian Airlines so we made excellent time checking our bags. Our tickets indicated we had TSA pre-check, so we sailed through security as well.

Our flight was supposed to be on time and all was going well until we sat at the gate for a few minutes while maintenance tried to find and repair a light or a switch in the cockpit that wasn't working. We left Portland just a few minutes late and made up the time in the air, arriving in Honolulu a few minutes early.

*My mom makes origami shirts out of dollar bills and hands them out as part of her tip at restaurants. The Honolulu International Airport terminal had these big dollar bill origami shirts as part of an advertising campaign. Pretty cool. As soon as we saw them Bob said, "You have to take a picture for your mom!"

We had time to eat lunch at Stinger Ray's restaurant next to our departure gate for Kona, Hawaii. I had fish tacos and Bob had a chicken quesadilla. We enjoyed our meals.
From Honolulu to Kona, our flight was on time. It takes about 45 minutes to fly between the two airports. We arrived in sunny Kona about 3 pm, picked up our Enterprise rental car, and headed to the Kona Coast Resort where we've owned a timeshare for about 25 years.

Check-in time at the resort is 4 pm. We arrived at 3:50 pm and were told they hadn't started cleaning our room yet and it would be over an hour before our room was ready. Sigh. That's known as "Hawaii time." The front desk apologized and said the would call us when our room was ready.

In the meantime, we went up the hill to grocery shop at the local KTA Market. We sat in their parking lot for a while looking at the view of the ocean and enjoying the fresh air. As we finished shopping, Bob's phone rang and our room was ready. Good timing.


This afternoon, we took a walk around the resort. Lots of birds were out and we saw tropical flowers in bloom, among other things.

On the Kona Coast Resort property is a Historic Heiau (ceremonial site)...


When we got to the resort, we traded our hiking boots and walking shoes for these... 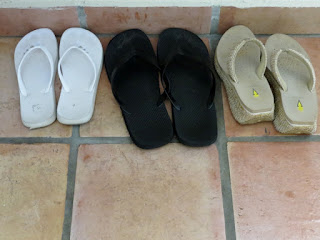 This evening at 5 pm the resort had a welcome reception with pupus (appetizers) and entertainment. We had a great time watching the locals put on a performance for us.


Did I mention the show took place during sunset? 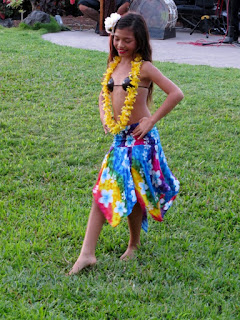 After the Welcome Reception, we headed back to our room where I cooked a fresh tuna steak and broccoli for dinner, and we also had a mixed greens salad. Today was a very relaxing day.

Tomorrow will be a long day. We're heading out by 8 am to drive around South Point to Hawaiian Volcanoes National Park. We will stop at points of interest along the way, go to the Volcanoes N.P. Visitor Center, check out Halemaumau Crater, go to Hilo for lunch.

In late afternoon, we will hike out to see the fresh lava flowing into the ocean. That is a 7.8 mile round-trip hike. The idea is to get to the lava flow at dusk and be there as it becomes night to see the glowing red lava flows.

After hiking back to our car, we will take Saddle Road back across the mountains to Kona. Must get some sleep now.

Posted by TravelBug-Susan at 1:30 AM 3 comments:

Thank you to everyone for the Facebook and blog birthday wishes. They mean a lot to me. My birthday was awesome!

Lake: Sunday morning, Bob and I went our separate ways as he had a half-marathon training run and I was doing a 10k Volksmarch worker's walk with Susan M., Rick and John.

Southside Lions Park is where we started our walk. The walk will be an event sponsored by the Randolph Roadrunners Volksmarch Club (the one I belong to). The weather this morning was magnificent--clear, cold and dry.

The first mile of our walk was around Lions Park Lake where we saw great white egrets, geese and American coot. A few fisherman were out vying with the egret for rainbow trout that are stocked in the lake in fall and winter.  (Catfish are stocked in the summer.)

After the lake, our route took us on the Southside Lions Park Trail for a 5.2-mile, out-and-back walk along Salado Creek and through Comanche and Covington Parks. 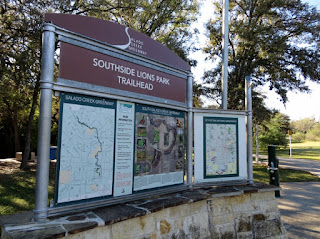 Types of trees we saw included, but were not limited to, live oak, cypress, and pecan. There are also palmettos and bamboo along the path. 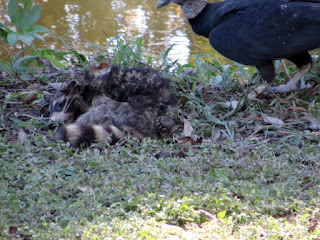 Below, in the tree, we have  a committee (wake, kettle, or volt) of vultures which had all been feasting on the raccoon.

When the walk was over, Susan and I wanted to see "Fantastic Beasts and Where to Find Them," the precursor to the Harry Potter books. Bob had finished his walk and called to see what we were up to. He's not a big sci-fi/fantasy fan, but he wanted to be with me for the movie I chose for my birthday. The movie was starting in 20 minutes, so he met us at the theater. Susan M. and I loved the movie. It is funny, creative and has a good story and acting.

Steak and Cake: Lunch time was way past due by the time the movie let out. Off we went to 54th Street Grille and Bar. One of the meals I wanted on my birthday was steak. When we sat down at the table, lo and behold, the special was a 6 oz. Filet Mignon served with salad and steamed vegetables. It was meant to be and it was very good. Because it's my birthday, they gave me a free piece of chocolate lava cake with ice cream. I shared with Bob. (Susan had dessert as her main dish, so she didn't want the cake.)

Shake: After lunch we went home to relax. Once it was dark, Bob and I went to Six Flags Fiesta Texas for their "Holiday in the Park." We had a good time, saw two of the shows, walked around and saw the lighted Christmas tree and other Christmas decorations. 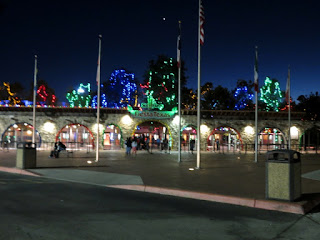 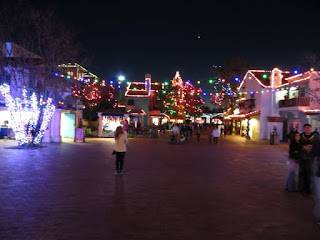 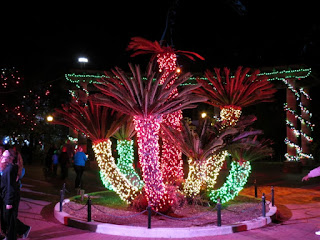 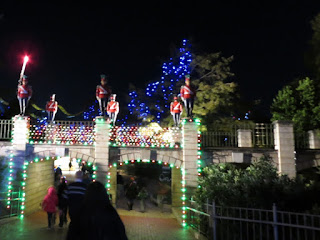 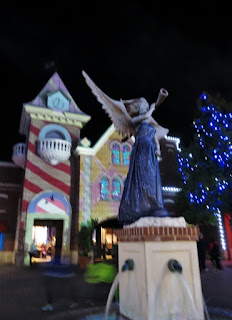 One of the shows we saw was called "The Majesty of Christmas," and was the Christmas story told entirely in song. It was pretty impressive. Mary came riding in on a donkey. There were two angels flying on a track up in the air. A multitude of people visited Jesus at the manger and a herd of goats, two kids and a sheep all made their way up on stage from the theater floor. When it came time for the wise men to arrive, they came down the center aisle of the theater.

After the first wise man, Bob said, "So is there going to be a camel?"

Well the joke was on me, because not a minute after I said it, I turned around, looked back up the aisle, and sure enough, a wise man on a camel was riding through.

I poked Bob and I said, "No way! There's a camel coming down the aisle." We both totally cracked up.

After that show, we made our way over to the Christmas tree lighting with lights set to music. The first song we heard was by Trans-Siberian Orchestra, one of our favorite bands. 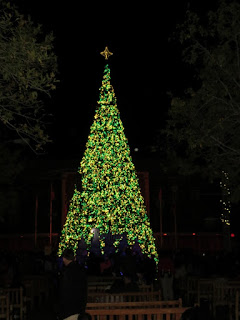 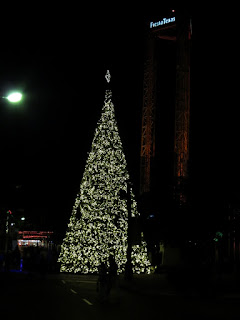 Behind the tree was the Rockville High Theater which was where the next musical show would be. We found seats and relaxed until the show started. This was a Christmas song-and-dance extravaganza with lots of classic holiday songs. 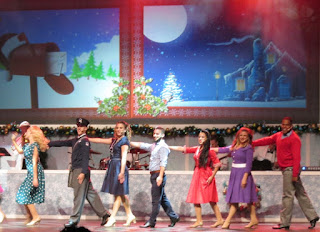 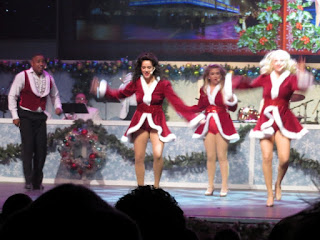 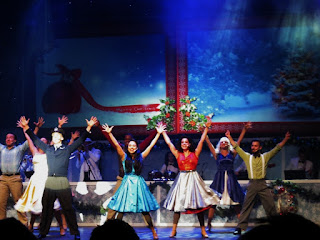 On the carousel, I chose the cheetah. Unfortunately, it did not go up and down. That's what I get for choosing the feline. 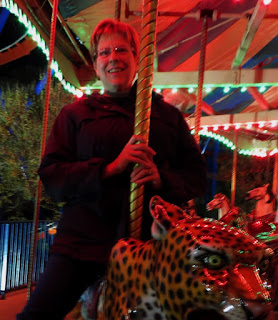 The park was amazingly uncrowded. Possibly folks are waiting until after Thanksgiving to go. Lines were very short for the rides. Bob and I went on Pandemonium Coaster. After that he was done with rides for the night.

I wanted to go on Iron Rattler. The line was so short I was able to snag the front car for an unobstructed view. However, it was so dark I couldn't see much anyway. I loved it!

On the way out of the park we snagged two Choco Tacos for our late-night treat. From Six Flags we headed home.

Thank you, Bob, and Susan M. for the fun birthday.

Posted by TravelBug-Susan at 1:52 AM 2 comments: