Sunday morning we slept in after our partying of the night before. Bob took me out to breakfast at IHOP. Very good food and service at our favorite IHOP location in San Antonio.

We then headed off on our Sunday wildflower driving adventure. After getting stuck in a major traffic jam heading out of San Antonio, we then had clear sailing (sorry about the mixed metaphor) to Fredericksburg. As we were stopped on the Interstate 10, I was able to get a great photo of a field of bluebonnets in the median.

First stop on our journey was Wildseed Farms, a family-owned business that grows wildflower seeds and works with landscape designers and highway departments to fulfill their demands for seeds. We've been to Wildseed Farms when all the wildflower gardens were in bloom. However, on Sunday, only the bluebonnets were in full bloom. Red poppies were just starting to bloom. Most of the display gardens were empty. it may be another week or two before they're at their best.

After spending about 20 minutes at Wildseed Farms, we headed north on Hwy. 16 to Willow Loop Road. it's supposed to have spectacular displays of wildflowers in the spring. Two years ago, I went there with my mom and sister. We were too late for the prime display. This year, we were too early. Oh well, we'll have to try again in a couple of weeks.

After we drove the 13-mile Willow Wildflower Loop, we went north on Hwy. 16 to Ranch Road 965 and headed southwest to Enchanted Rock State Natural Area.

It was our first time to drive this road. What an awesome view of Enchanted Rock's pink granite dome from this road! If you enlarge the photo below, you can see people hiking on the rock.
We did not stop at Enchanted Rock this trip. It was too warm, and we weren't wearing the appropriate footwear to climb the rock. It's awesome just to look at.

From Enchanted Rock we went back through Fredericksburg and decided to drive Old San Antonio Road to the Old Tunnel State Park. Be sure NOT to take your RV on Old San Antonio Road! It is very narrow and curvy, with steep drops to creek crossings. Whee! But not in your RV.

From May through October, the Old Tunnel State Park is known for millions of bats that emerge from the old railroad tunnel each night. At this time of year, though, it's deserted. 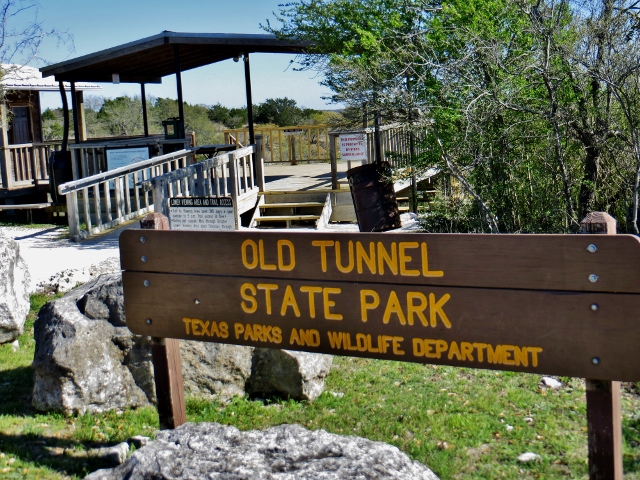 We will have to come back in better hiking shoes to do the 1/2 mile steep trail on loose rock. After we finished reading signs and poking around at the top of the hill, we continued south on Old San Antonio Road. I was driving and saw a sign for James Kiehl River Bend Park. Since we were in the area, we headed onto the side road to check it out. 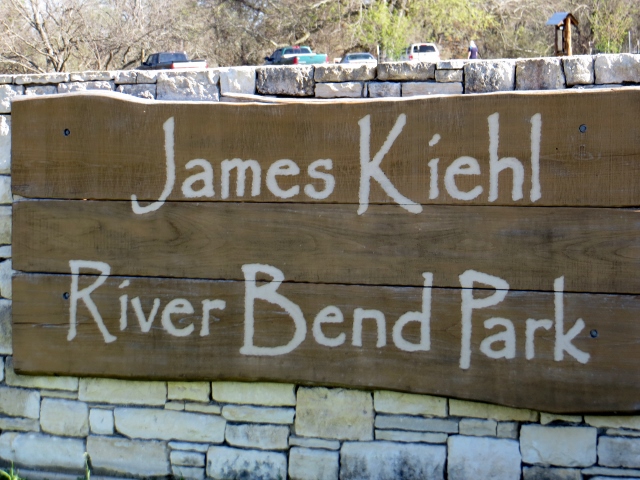 The park is dedicated to James Kiehl, a U.S. Army hero, who died in 2003 while defending the Army's 507th Maintenance Company during an ambush in Iraq.

The park has very interesting signs about the area's local history, flora and fauna. Bob said the sign about Texas leafcutter ants is the most interesting informational sign he has ever read.

Did you know leafcutter forager ants carry more than six times their body weight while moving quickly over significant distances? According to the sign, "A proportionate task for an average adult human would be to carry 660 pounds while running a marathon at a four-minute-mile pace."

Local farmers report the leafcutter colony at James Kiehl River Bend Park has existed there for over 150 years. Leafcutter ants are beneficial, they are not pests.

Texas leafcutting ants excavate underground nests that may cover more than half an acre and be twenty feet deep. They contain numerous chambers interconnected by tunnels. Colonies can survive for many years and contain over five million inhabitants! That is mind boggling.

History of the area included prehistoric Americans, American Indians, Spanish explorers, cowboys, military troops, and then European settlers. To the east, near the settlement of Sisterdale, was the ancient and well-traveled Pinta Trail. Another trail ran through an early 1850s shingle camp known as Brownsboro. The Brownsboro settlement included the building of the San Antonio and Aransas Pass Railroad.

We also learned some interesting tidbits about armadillos. When faced with crossing a body of water, because their heavy armor-like shell causes them to sink, they walk across the bottom, underwater. However, when up against a wider body of water, armadillos swallow enough air to inflate their stomach to twice its normal size. This increased buoyancy allows them to swim across.

In addition to the signs, people were down in the creek playing in the water. A father and his young daughter were headed down to fish.


From James Kiehl River Bend Park we headed to Comfort, Texas where we joined up with the I-10 freeway heading east. For dinner, Bob took me to the Dog & Pony Grill in Boerne, Texas where we enjoyed a relaxing dinner. Then we headed home.

What a great day.