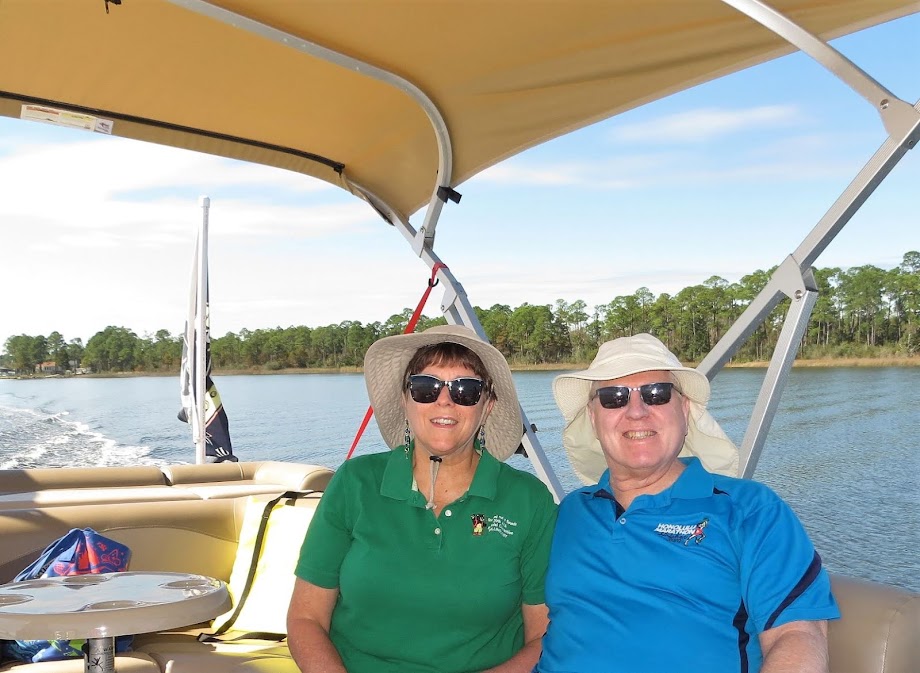 
Our original itinerary to get into Honduras showed us anchoring in the bay and tendering to shore. However, our captain was able to get us a spot on the dock for one hour. That meant instead of starting our snorkel tour at 9am, our time was moved up to 8 am and we had to be off the ship by 7:30.

Roatan, Honduras has a cute port with shops and a zip line at the area where we debarked the ship. However, the shopping would have to wait because we immediately were directed to the Jolly Roger's catamaran, our tour company for today.

When we debarked the ship at 7:30am it was hot and muggy, then we had a light sprinkle. When I took my first photos, the lens fogged up. I dried the lens, snapped the first two pics over again, and put the camera away.

After about an hour the clouds cleared a little and we had a partially sunny day for snorkeling. We boated a short way down the island's coastline. Our captain told us that the big cruise ship we saw docked next to a beautiful sandy beach had rented the beach and dock for the day, so we couldn't go there. They took us a little farther, anchored, and we hit the water.

Our boat had probably 60-70 people on it. They put us in groups of experienced snorkelers and those with little to no experience. What a zoo. Our experienced group had about 35 people in it. We had a guide who kept telling us to stay together because he was going to show us some things. We waited and waited. Bob and I and some other people got tired of waiting for him to lead us, so we swam about on our own while we waited, and waited.

Finally, he was ready to lead us, or so he said. We all got close and were treading water and kicking each other waiting for him to go somewhere. Needless to say, this was NOT one of our favorite snorkel trips. The reef was pretty much dead. There were some interesting fish, especially the lion fish he pointed out to us. Thankfully, it was down about 20-25' because it's a very poisonous creature. We swam for 50 minutes, trying not to stay too close to our guide so we didn't get kicked in the face by someone else's fins.

After we returned to the ship, we were treated to a very good Caribbean lunch with steamed chicken, red beans and rice, coleslaw, watermelon, and rum punch or soft drinks. Lunch was the best part of the day. We then meandered back to a different dock, and were picked up by tour buses which took us back to the dock where we had debarked. We shopped a little, then went back to the ship.

Because our captain was only able to stay at the dock an hour this morning, when we returned to the ship we had to be tendered a short way. The tenders looked a lot like the ship's lifeboats. I thought maybe a company had purchased lifeboats from a cruise line and was using them as tenders in this port.

When we were back in our stateroom, I kept hearing noises like winches, so I went out on the balcony and looked down. Lo and behold, the tenders were the lifeboats from our ship!

I read out on the balcony for a while before dinner. Bob went to the fitness center to run. When Bob came back from working out, we turned on the TV for the first time during the cruise. The San Bernardino shootings had just occurred. What a tragedy to see as soon as we turned on the TV. Our hearts go out to all those effected.

After dinner, we played Evening Team Trivia and did not do too well,. They asked some pretty tough questions!

At 7:15pm, we headed to the Stardust Theatre for Comedy Showtime with David Naster. We had heard him earlier in the week as part of the Welcome Show. He was so good, we couldn't wait to hear him again. We were not disappointed. The show was awesome. We laughed and laughed.

Had some dessert, then headed back to the stateroom, and watched movies on TV for the first time on this cruise. We saw "Mission Impossible: Rogue Nation," and the end of "Pixels." From what we saw of "Pixels," we decided we didn't need to watch the whole movie.

Day 6 of our cruise complete.

Tomorrow and Friday will be "at sea" days on our way back to Houston. Travel Bug out.
Posted by TravelBug-Susan at 8:29 PM