After our buckwheat pancakes, bananas and eggs for breakfast, we took off for Laurel Falls, a 2.5 mile roundtrip hike to an 80' waterfall. The early morning temperature here was pretty chilly...hovering a little over freezing. The rhododendrons were loaded with buds, but February is far too early for rhodie flowers We will have to make this trip in late April or May.

On our return to the car we heard wild turkeys gobbling loudly in the woods, but didn't spot them.

From Laurel Falls, we drove over the Great Smoky Mountains on Newfound Gap Road to the Cherokee Indian Reservation.


We found the trail and hiked to Mingo Falls. I would categorize this hike as a 0.2 mile stairstepper to an almost perfect 180' waterfall. Even though some of the other falls we saw were higher and more spectacular, this was one big huge waterfall which was made up of many, many small cascades coming together in a cohesive whole. Lovely and peaceful.


Our next waterfall experience wasn't quite as cohesive. We started out the hike making our way 0.3 mi. to Juney Whank Falls. However, our brochures had conflicting directions about how to see the other two falls in the same area. It was my own fault for what happened next on this hike fiasco.

When we were in the car, I kept telling Bob we needed to take the directions with us because they were confusing and maybe they'd make more sense on the trail.  But I argued myself out of taking the directions because I thought I understood and didn't want to carry the brochure. First mistake.

After we hiked the 0.3 mi. to Juney Whank Falls, I thought we were supposed to do a loop hike to get to the other two falls. So we looked for the Deep Creek Loop Trail. Second mistake.

This is when we got lost...Should NOT have gone on the horse trail over the mountain! 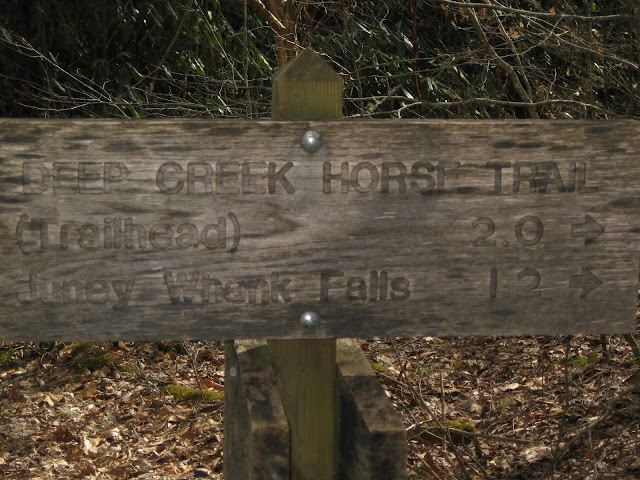 We ended up on the Deep Creek Horse Trail going over the top of a hill and down the other side. I kept saying it didn't seem right because it shouldn't be so far to the next falls.

Third mistake: When we got to a junction in the trail, there were no signs pointing to any other waterfalls. To the right was a bridge crossing a river; to the left a nice dirt road trail going along the river. We decided to go left and follow the big river because maybe that was where the falls were. We hiked and hiked, got passed by an older man on a bicycle. Kept hiking. Finally we got to another bridge and saw the guy on the bicycle coming back. We stopped him and asked if he knew where the other two waterfalls were. He said they were back the way we'd come. We needed to turn around and go back to the last bridge and go right instead of left. 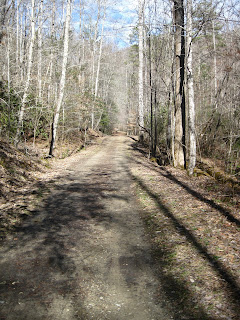 I now see how people get lost in the woods. From now on, unclear directions come with us on the trail.

We went back and turned the other way on the trail and found the other two waterfalls very easily...along with all the other hikers who knew what they were doing.

Long story short, we could have seen all three waterfalls in a 1-1/2 mile hike. We turned it into a five-mile hike.

We called it a day and headed back to our timeshare. On the return trip, we saw two elk on the edge of a meadow near the Oconaluftee Visitor Center.

Back at the unit, Bob watched Indiana Jones and the Raiders of the Lost Ark. I spent the whole evening catching up on blogging. We haven't had internet access since we got here last Friday. I'm glad we have it now!

Weather forecast is for one more day of nice weather, then a storm hits Thursday and Friday with 100% chance of rain. We've been very fortunate with weather so far. It has allowed us to do all our hiking.

Time to go to sleep. Tomorrow we're going to brave the tourist trap of Gatlinburg. LOL. Should be interesting.
Posted by TravelBug-Susan at 10:00 PM