Our staycation continued today with the luxury of sleeping in late. Our first destination today was McNay Art Museum. One of their special exhibits here until September 11 is Coney Island: Visions of an American Dreamland, 1861-2008. 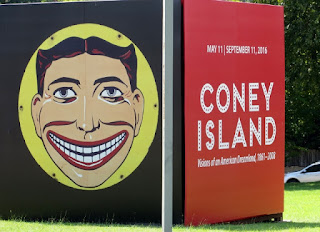 Ever since the exhibit opened on May 11, I have wanted to see it but as we know life sometimes gets in the way. This weekend is a perfect time to get to the museum for the exhibit.


"Coney Island: Visions of the American Dreamland, 1861–2008 celebrates the most iconic, uniquely American amusement park in the United States. Also called, “the People’s Playground,” Coney Island is a national cultural symbol that has inspired artists, musicians, novelists, poets, and filmmakers. From Coney Island’s beginning as a watering hole for the wealthy, through its transformation into an entertainment mecca for the masses, to the closing of Astroland Amusement Park following decades of urban decline, the exhibition explores 150 years of the lure of Coney Island. The modern American mass-culture industry was born at Coney Island, and the constant novelty of the resort made it a seductively liberating subject for artists. Taken together, these tableaux of wonder and menace, hope and despair, dreams and nightmares, become metaphors for the collective soul of a nation.

This is a particularly fascinating exhibit to me because it incorporates not only the art and advertising over 150 years, but it delves into human subjects as well. For example, sideshows exploited people's disabilities and deformities, showcasing those suffering from certain diseases, charging admission, and making spectacles of them.

Another example of the psychology of Coney Island was creating thrill rides in which total strangers were thrown into others on roller coasters and Tilt-A-Whirls. Singles often met their spouses by literally bumping into them on these rides. There was an allure and adventure in going to Coney Island when it was in its heyday.

Percey's Pocket Dictionary of Coney Island is mentioned in the exhibit under the title of "For the Fun of the Thing." I looked up the quote to find its origin. Here is how it is used in the book:


"Photographs. — If you should for any reason, personal or otherwise, desire to have your picture taken at Coney Island there is a small pavilion devoted to the art near Leach's West End Hotel, and at the Brighton Beach Bathing Pavilion. There are generally itinerant photographers also to be met with on the beach. The quality of the pictures taken, of course, rarely surpasses
the original, but you don't pay for flattery, but 'for the fun of the thing.'"

One of the movies on display in the exhibit was from 1905 and showed the park at night lit by Thomas Edison's light bulbs. All the buildings were outlined in lights. It was very pretty.

A huge, seven-story building in the shape of an elephant was visible to people arriving on Coney Island. Known as the Elephantine Colossus, this building housed a hotel. People the world over traveled to Coney Island to partake in the amusements.

The amusement parks suffered a decline during the depression. During part of that period, Coney Island was used to train troops when the U.S. went to war, and the sound of soldiers marching took over the boardwalks. In WWII there was a resurgence in the need for amusement parks and once again the parks gained in popularity.

Another impressive portrait of Coney Island in art and photographs was the sheer number of people on the beaches. The crowds were body to body. I couldn't figure out how anyone could get from their towels to the water, or how they ever found their way back to their belongings!

From the Coney Island exhibit, we toured the rest of the McNay and spent some time on the grounds of the museum which are worth investigating.

The installation below is a continually changing video of wildflowers revolving and moving. It was beautifully mesmerizing. 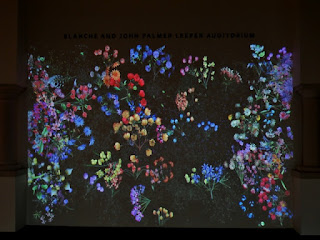 A new exhibit since the last time we visited was the art of toy theaters. These toy theaters had elaborate moving parts, lighting, and an array of set drops and cut-out characters. The toy theater below was made by Ruloff Kip, a wealthy New Yorker, for his daughter Elizabeth. What was special about this toy theater was his attention to detail and his use of his own family for inspiration.
Below is another toy theater created by Everett Shinn.

The McNay Art Museum not only has an interesting and eclectic collection of art, the museum itself is a work of art. The building is a 24-room, Spanish Colonial-Revival house and has gorgeous lines and a beautiful inner courtyard. In 2008, 45,000 square feet was added to create gallery space for major exhibitions, classrooms and an outdoor sculpture garden.

We then wandered outside to see the grounds.

We had worked up an appetite and headed to Broadway where we have been working our way through the many restaurants along that street. Broadway 50/50 was recommended to me by my hairdresser so we gave it a try.

With that part of our day complete, we headed home to rest before we headed out to the San Antonio Missions baseball game. Oh, just before we got home, we took the Escape Pod to the car wash, it was a mess! At least we got it clean.

The game had a couple of false starts. The crew started taking the tarp off the field, but ended up putting it back on three different times. It was fun to watch the process...not something we usually get to see.

They finally removed the tarp for good about 7:15 p.m. and the game was played at 7:40 p.m. We stayed until the top of the 9th inning. The Missions were down by one run to the Corpus Christi Hooks. I'm not sure who ended up winning.

We had another wonderful day on our Staycation. When we returned home, I wrote a blog. Then I noticed Six Flags Fiesta Texas was having a 70% off sale on their 2017 Season Pass! OMG, that's amazing. The sale is only good until midnight, Sept. 5. The Season Pass includes admission to the park for the rest of 2016 until the end of 2017, parking, admission to special events and, from time to time, we get to bring a friend to the park for free! I signed us up and for good measure added the Dining Package. Any time we go to the park, and we can go as much as we want, the Dining Package gets us lunch, dinner and a snack. We couldn't pass that up. My friend, Susan, bought tickets for her and her hubby, Darren too. Score!

Thank you, Bob, for such a wonderful weekend. And we still have a day to go. Yee ha!