I'm taking a look at the Seven C's (not the high seas) around Nashville this weekend. They are:

Today is a day of change for us. We're packing up the 5th wheel and moving 14 miles to another COE campground. Even though we made reservations months ago, we could not get a week in either campground, so we split the week between the two. It's nice because we could check out another COE park.

Cedar Creek Campground is on the Cumberland River. The road to this campground is quite narrow.

We had a level site underneath a cherry tree in full bloom. The sites were spaced nicely, and we had a view of the river. Throughout the day, we could see a couple of great blue herons and an egret fishing close to shore. 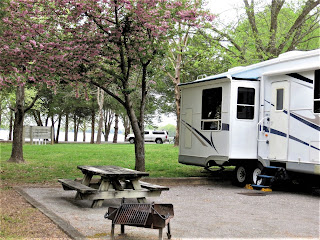 We were surprised to learn that tugs/barges go by on this river. The Cumberland River travels 687 miles from its headwaters in Lechter County, Kentucky, to Smithland, Kentucky, on the Ohio River. Over 300 miles of its course is through Tennessee.

The Army Corps of Engineers was instrumental in building dams and dredging the river to make the area navigable and has had a major influence on the Cumberland River since 1832. In "1825, increasing steamboat trade caused the Tennessee legislature to petition Congress for a survey of the Cumberland which was the main shipping route for middle Tennessee produce. Between 1832 and 1838 Congress appropriated $155,000 for river improvements, viewing the potential production from the coal fields of eastern Kentucky as justification for navigational improvements. The U.S. Army Corps of Engineers began clearing snags and constructing wing dams to deepen the channel." [Reference: Tennessee Encyclopedia. Click the link for more U.S. Army COE and Cumberland River history.]

We had a relaxing day in the park. In the evening, Bob took a walk around the campground. We had a magnificent sunset!

Here we are in Nashville, the country music capital of the United States, and neither one of us are country music fans. We learned a little about country music history when we were in Memphis, learning about the history of rock 'n' roll and soul music. They're all interrelated through the early roots of hillbilly music from the Appalachians, Gospel, and the blues. As I was looking up the history of country music, I stumbled upon an excellent blog about Nashville that will take you through the whole Nashville scene. The blogger is Amanda and her blog is Dangerous Business: a Travel Blog. Click on her blog link to read her take on Nashville's music history.

Bob's quest to immerse himself in Civil War history found him learning about the Battle of Nashville and the Stones River Battlefield 30 minutes away in Murfreesboro. You can reference his guest blog here.

When we planned our trip to Nashville, we learned The Cultural Landscape Foundation (tclf.org) would be holding one of their "What's Out There Weekends" in Nashville. After having gone to the TCLF weekend in San Antonio, we were delighted to learn we could attend their free tours in Nashville and planned our stay accordingly. For the next two days, we will be on six different tours with them.

One thing we do not like about Nashville is its traffic on I-40. Holy smokes, to stay on I-40 you have to change lanes left/right/left. In most of those places, you have less than a mile to move over. And everyone else is trying to change lanes too. This was some of the gnarliest traffic we have encountered on our trip to date. Come to think of it, when Susan Medlin and I made our trip to Washington, D.C. last October, Nashville's freeways proved to be quite stressful then as well. This city needs a complete redesign of I-40 through the downtown core area. Easier said than done, I'm sure.

That was my visit to the seven C's of Nashville. I hope you enjoyed the ride. Our six tours with The Cultural Landscape Foundation over the weekend include: