Well, today turned out awesome in a number of different ways.

Our group met at the dock on the Homer Spit where we boarded water taxis to take us to the Grewingk Glacier Lake Trailhead. There was an exceptionally low tide this morning, so the ramps to the docks were at a very steep angle! Three water taxis were needed to ferry our group across Kachemak Bay.


Normally, the trip takes 45 minutes; however, the bay was smooth with no wind and we made it across in 20 minutes. As we neared shore, sea otters popped up to look at the boat. A couple of them were floating on their backs. They are so curious and had to see what was going on.
Because the tide was so low, the water taxis couldn't drop us at the trailhead. Instead, they took us about 1.5 miles down the beach to a place where we could offload. Then we hiked the 1.5 miles to the trailhead on a very rocky beach.

The people in the first water taxi had to exit the boat to the beach via a ladder! That looked rather exciting. Our taxi and the third taxi stormed the beach via a ramp that dropped right onto the gravel. Easy peasy!

Once we all met on the beach, we started off across the rocks. The tide was out so far that we saw a starfish, more accurately known as a seastar (it is not a fish). Cindy, our group leader,  picked it up and turned it over for us to see the hundreds of tiny little feet on each "arm."

To move, seastars fill these feet with seawater, causing the arm to move like a foot would. This mechanism allows the seastar to move--much quicker than you would expect. Each arm has a short sensory tentacle at each end that responds to chemicals and vibrations in the water, and a red photosensitive eyespot. A seastar often lifts the end of an arm to perceive light and movement.
When we started our walk along the beach, Cindy pointed out a fresh-water stream that disappeared under the rocks before emptying into the bay farther down the beach.
You will see in the next few photos the amount of rocks we had to traverse on the beach. They are hard to walk on.

And then we saw the bald eagle and everyone came to a screeching halt. We had to get photos of this majestic bird!

When we arrived at the trailhead, we divided up into fast and medium walkers, used the port-a-john, and then set off. Bob and I were in the group of fast hikers, so our group started out first. We were going to take a two-mile detour to the "tram" and take turns riding in it. The other group would go straight to the lake.

When we turned off on the spur trail to the "tram," we saw these very psychedelic-looking mushrooms. Wow. No, we did not try to eat them.

The biome changed from rainforest to taiga on the rocky remains of the receding glacier. The taiga biome is also known as coniferous forest or boreal forest. This biome typically has short, wet summers and long, cold winters. Precipitation is moderate in the taiga. It gets plenty of rain in the summer and plenty of snow during the winter. The dominant plants of the taiga are generally conifers, but a number of broad-leaved trees are also found in the taiga biome. These include birches, alders, aspens, willows, poplars, and rowans.

We have come to the wide river with the "tram" crossing. There's no way you could walk across this river! 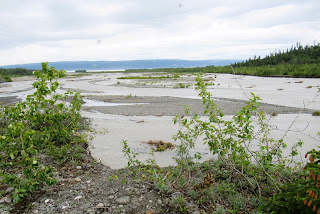 We have made it to the tram. As you can see, it is a metal conveyance you use to pull yourself across the turbulent river.

All of us wanted a turn riding on the tram because it's unique (not to mention scary).

I'm taking a photo back from the middle of the river.

Next, Tom C. and Bob Z. went out individually. We took pics of them on their phones.
Then Bob decided he had to go to the other side. Kevin and Bob Z. helped him because it's really hard work to pull that rope. When you get to the other side, you have to get the tram car uphill to the platform. He did it, but it took longer than we thought.
Once we finished there, we hurried to the lake (except for a few photo stops). 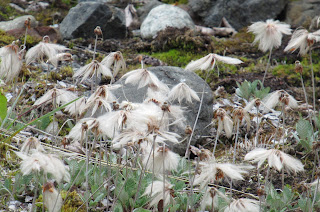 I told the group, "We'll probably get there and Cindy will say, 'You have five minutes to eat before we leave.'" I was close. When we got there, we found out Bob and I were going back on the first water taxi and we had TWO minutes to eat!
No way. I was starving and I wolfed down my whole sandwich as fast as I could so I'd have enough energy for the two miles down to the Saddle Trail water taxi pick-up point. We didn't have enough time to enjoy the lake, glacier and icebergs. I only got six pictures there and I had to hurry to take those.


Jim, Bob, and I took off on the trail so we could make it to the water taxi in time.
The trail was way easier than I thought it was going to be! We saw signs of bears crossing the trail in multiple places. Thankfully, we did not have a bear run us down as it went on its way!

When we arrived at the landing for the water taxi, we had to wait 15 minutes for it to pick us up. It was late. We were a little early. 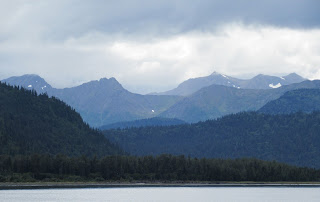 I'm REALLY happy we went down the Saddle Trail rather than up it. It had a 39% grade in parts and those parts were muddy and slippery. We had to be very careful going down.


After the water taxi picked us up, he wanted to give us a little tour. He took us to the small community of Halibut Cove. It was beautiful. I took a number of photos for those of you who won't get a chance to go there.

And then we arrived back at the marina in Homer. The two photos below are of a very unique, and I believe, home-made RV. 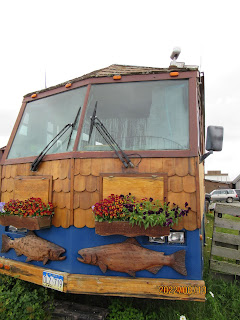 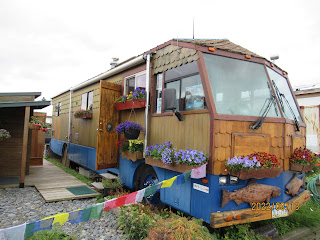 Here are a few photos of the Homer marina. 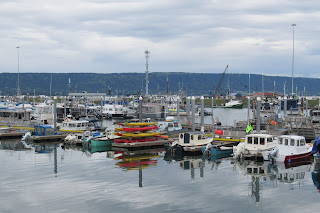 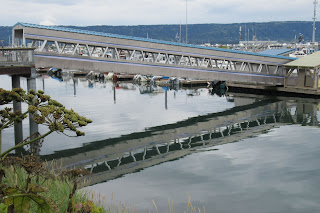 All in all, my step tracker showed I walked 10.5 miles today. That includes walking from parking to the dock and back, and walking to the public restrooms. That's a lot of miles. No wonder I was famished when we got home. But I was also exhausted and took a nap for two hours before dinner! Then I made chili and salad.
The fifth reason today turned out awesome was the gorgeous double rainbow we could see from our 5th wheel this evening. 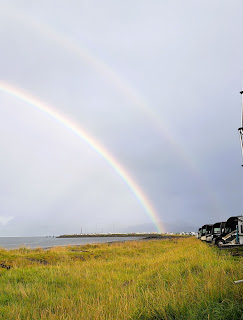 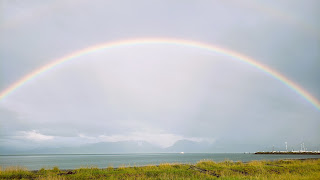 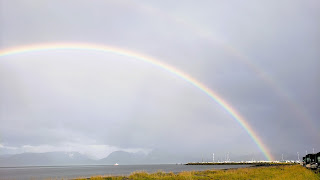 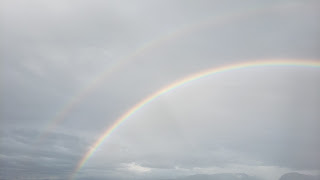 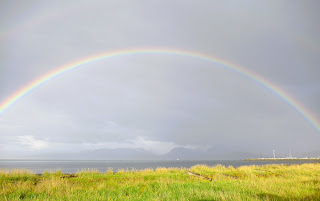 OK, so I got a bit carried away with the rainbow photos. I guess you had to be here.
That's all for today. Tomorrow, we are going to Seldovia, Alaska, to roam around and see what's there. Enjoy your Sunday!
Posted by TravelBug-Susan at 10:30 PM