Rainy, foggy, cold, dreary, Pacific Northwest weather; that's what we awoke to this morning. It did not bode well for flying across Cook Inlet to fish for salmon in a boat on a lake and watch bears.

We got up, ate breakfast, and drove an hour from Cooper Landing to Soldotna, Alaska to Talon Air Services, Inc. When we arrived, we checked in at the office.

From there, we made our way to another building, where we put on waders. Even though we would be fishing from a boat, the waders would help keep our legs dry in the rain. 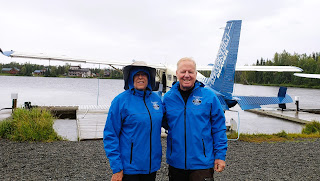 It was raining as we loaded into the Beaver, an eight-seat float plane. Bob and I had never taken off from water before. It was exciting and a little scary, as is usual the first time you try something new. We loved it.

As soon as we were up in the air, our pilot took us across Cook Inlet, and then the fun and wonder began. The flight was bumpy because of the weather, but we loved it. We flew up close and personal next to the volcanic peaks, tarns (mountain lakes), and glaciers. Below us were braided rivers flowing out of the glaciers. It was breathtaking and awe-inspiring. Bob and I found it to be our favorite day in Alaska so far.

We were "wow"ing and "ooh"ing and "aah"ing the whole way to the lake where we would fish. This plane ride is what we expected when we went to McCarthy, Alaska, but didn't get the full experience there that we had today. Today's flight was worth every penny and we'll remember it fondly for the rest of our lives.


The greenery in the foreground in the photo below is a floating bog. When our guide or pilot stepped on it, the whole thing moved. We didn't get to walk on it.
All five of us started out in one boat, but two were asked to join two people on another boat; then each boat would have four people and a guide. Tom and Kevin volunteered to go on the other boat. However, there weren't two other people, so they had their own guide.

Once we landed on the lake, there was no rain. Yay! From the plane landing area, our guide Bill W., took us by boat to the fishing area on Big River Lakes, about a ten-minute ride. The wind was cold, though, as we rode across the water. Brr!

This tour was first class all the way. Our guide set up our fishing rods for us and taught us how to cast the lines. In fact, he did the first few castings for us while he taught us. He got the fish on the line a couple of times and we reeled them in. Those sockeye salmon (reds) are real fighters. I had trouble getting them to the net.

When we did our own fishing, I caught mostly rocks. LOL. Bill had to disentangle the line and lost a couple of hooks in the process. I did manage to snag one fish on my own and bring it in. The limit was three salmon per person and we all got our limit.
While the fishing was great, the real stars of the day were the bears. Yes, we saw brown bears and, yes, they were close to the boats. In fact, one was about 5-6' away from our boat! But they weren't interested in us, they only had eyes for the salmon.

When the first family of bears came down to the lake, only the mama went fishing. There were three cubs with them. The male bear wanted to fish and got in the water, she smacked him in the face and he went and sat on a rock while she fished. In fact, when he got in a second time, we saw her smack him again.

There were seven or eight boats in the cove. Two of the boats had only photographers on them. Their camera lenses were huge! They were out there for two hours just to photograph and watch the bears. The rest of us were there to catch fish!
After we finished fishing and watching the bears, Bill took us to a smaller lake where we "used the facilities" (i.e. the woods).
Then, we moved over to one of the floating bogs where Bill cleaned and filleted a salmon for us that he had caught. When he grilled the salmon for our lunch, we had a choice of Cajun seasoning or lemon pepper. Bob and I chose Cajun seasoning and Bob and Lynn had lemon pepper. Our fillets were about 1/2 pound each! The fish was absolutely wonderful.

There were a pair of loons on the lake, so we were serenaded while we ate. Bill also explained that the small lake we were on was a caldera left over from an ancient volcano.

Our time was up and Bill zipped us back to our float plane.

It was still raining in Soldotna. We took off the waders, got our own shoes back on, and then went to pick up our fish which Bill had filleted for us. It's up to us to get the fish to a seafood processor for cleaning and vacuum packing. Then we will put it in our freezer to enjoy throughout the rest of the trip. Oh, boy!
Great reviews will be written by us about Talon Air Services, Inc. and their top-notch tours! THIS is what we came to Alaska to do and we're doing it in style.
We drove the hour back to our campground very pleased with our wonderful tour today. Tomorrow, we will take our fish to a seafood processor in Homer, Alaska, our next destination.
Time to dream of bears and fishing!
Posted by TravelBug-Susan at 11:30 PM