Our day started out at 9:47 a.m. when we hit the Riverwalk in front of the RV park for a 12K (7.44 mile) walk from Mission San Jose to Mission Conception and back. We've done it before, but it's so convenient to where we're staying we'll probably do it again. 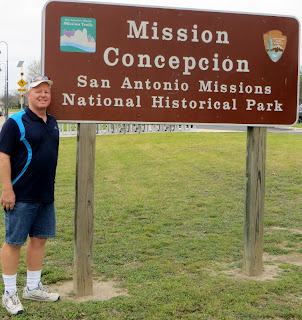 We got a big kick out of St. PJ's Counseling Center. We're picturing saints in their PJ's. However, upon closer inspection, St. PJ's is short for St. Peter and St. Joseph. 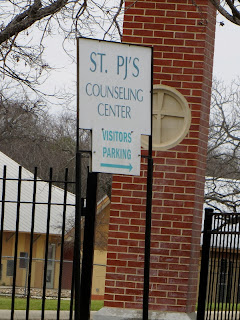 The entrance gate to the Home of St. Peter's and St. Joseph's. 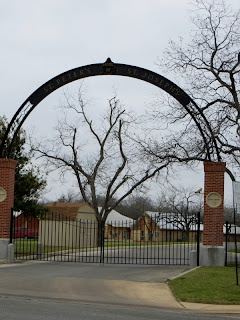 We saw the usual birds on (or next to) the river: cormorants, great white egrets, Northern shovelers and coot. There were also two turtles sunning on a rock in the river. But the nicest surprise today were the early signs of spring in south Texas. We saw our first bluebonnets, the yellow fuzz-ball blooms of the Huisache (sweet acacia) tree, Indian Blanket (firewheel), and pink evening primrose. I was so thrilled to see the first bluebonnets next to the trail. I hope they're still blooming at the end of March when my mom and sister visit from Oregon.

The next flowers are called Indian Blanket or firewheel. Quite a few of these plants were blooming along the Riverwalk. Pretty good for February.

Following are the prolific blooms on the Huisache tree, also known as the sweet acacia. The common name, Huisache, is derived from Nahuatl and means many thorns. In southern Europe this species is planted extensively for its flowers which are used in making perfume.

Five main missions lined the San Antonio River during the 1700s: Mission San Antonio de Valero (The Alamo), Mission Nuestra Senora de la Purisima Concepcion, Mission San Jose, Mission San Juan and Mission Espada. We saw a history marker on our walk today which told of another mission in 1722: Mission San Francisco Xavier de Najera. It was in the general area of the golf course, just south of Mission Concepcion. Being a smaller mission, its Indian neophytes passed into the care of the missionaries at The Alamo in 1726, and the land was granted to Mission Concepcion in 1731. 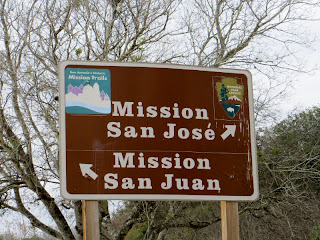 We completed our 7.44 miles in two hours and 15 minutes, returned to the 5er, showered and got ready for the RV park Olympics. We didn't take time to eat lunch. (That was an error in judgment on our part.)

The Olympics were supposed to start at 1:00 p.m., but it was pretty disorganized. There were seven teams of 10 people. Five events required two people from each team to compete to earn points:
Wow! The above events took forever to complete. Only one competition went on at a time, so there was a lot of standing around and waiting.

Once all the preliminary events were completed, we moved on to team relay events. Each team of ten raced through five events from start to finish. Once they finished the next team went, etc., until all seven teams had completed their relay events. The relay consisted of each team completing the following events in this order:
By this time, everyone was cold and hungry. As soon as the awards ceremony was over we all headed into the event hall for hot dogs, the fixin's, chili, chips, and brownies--all provided by the RV park. By the time we returned to the RV it was almost 6:00 p.m.!

We watched 60 Minutes and The Amazing Race. Then we watched our Netflix selection, "A Dangerous Method," starring Viggo Mortensen as Sigmund Freud, Michael Fassbender as Carl Jung and Kiera Knightly as Sabina Spielrein. The movie was okay and had some interesting moments when the psychology of Freud and Jung, who were friends, was debated by the two.

What a busy weekend! Whew.

Travel Bug out.
Posted by TravelBug-Susan at 1:30 AM