Once in a while in life a surprise gem turns into a treasure. Today's Volksmarch was once of those times.

The sky was blue, the temperature 72 degrees, and a cool breeze kept us comfortable. At 10:00 a.m. we met Peri and Jim at Benini Galleries and Sculpture Ranch in Johnson City, Texas, for a 10K Volksmarch. This is one of those, "I never would have known this place existed," moments. The Benini's graciously opened up their ranch for today's Volksmarch event sponsored by the Selma Pathfinders Volksmarch Club. 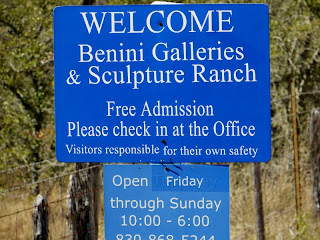 By the butterfly garden, was this adorable statue and bird house. (Yes, the statue is small.) 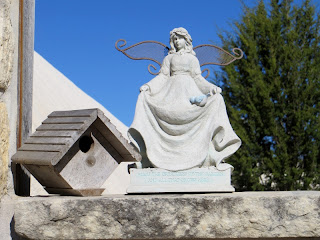 After we signed in, off we went on a great walk through acres of property to see all the sculptures contained therein. I am posting some of my favorites and a few not so favorites so you can see the diversity. 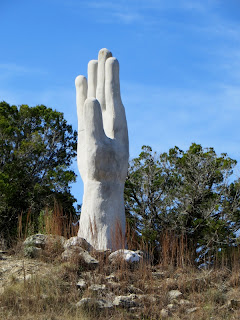 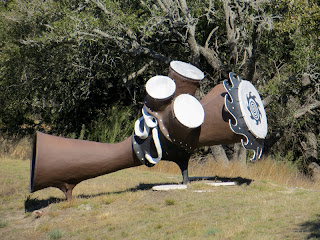 The following sculpture changed color as you walked around it and saw it in different light. 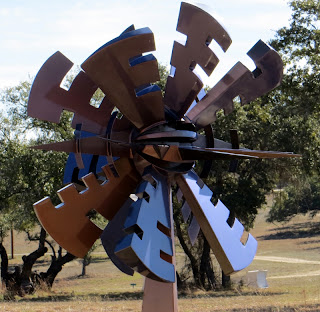 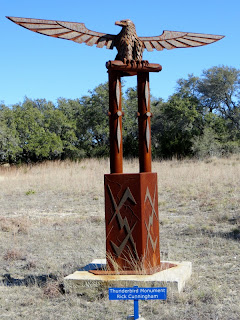 Our course was hilly so we got a good workout. The art walk was great because there was lots to look at as we traversed the Hill Country. 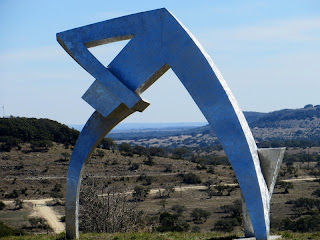 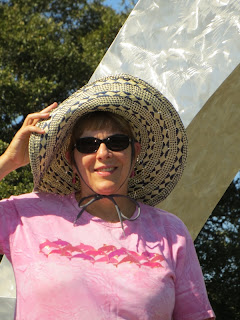 Sculptures all along the way... 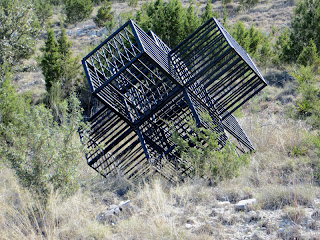 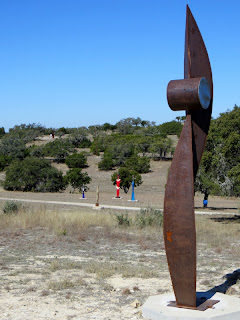 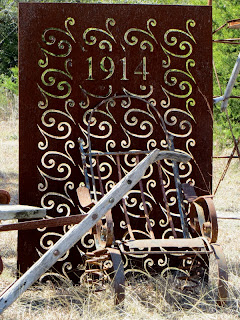 The art was along the first 5K of the walk. When we exited the Sculpture Ranch gate, we followed ranch roads through the Hill Country for the next 5K. We saw lots of live oak and some juniper trees.

At this point, we re-entered the sculpture ranch. After we checked in at the finish table, we toured the gallery. Gorgeous primary-color paintings and bright secondary colors greeted our eyes. 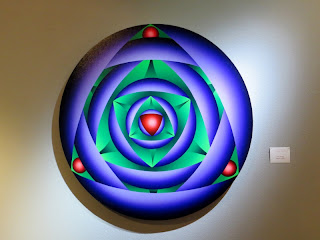 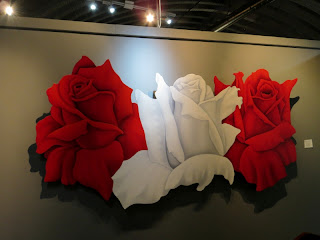 If you did not know this gallery was here, the only clue on the main highway (TX 290) is this sculpture of a longhorn and a sign that says, "The Preserve at Walnut Springs."

As usual after walking 10K (6.2 miles), we were hungry. We stopped for lunch at The Country Cupboard. Their menus are pasted on brown paper bags, you remember the big ones?

One of their specials was chicken and dumplings. Peri and I opted for that. Jim chose chicken-fried steak with mashed potatoes and gravy and Bob had the teriyaki catfish. The Country Cupboard has been in business since before Lyndon Baines Johnson was president.

Speaking of LBJ, the second part of our day was to explore the LBJ Ranch (since we were in the neighborhood). All of us piled into Jim and Peri's car for the 13-mile drive to the ranch. Once there, we briefly went in the Visitor Center to find out about the house tour. Peri and I stamped our National Parks Passport books. 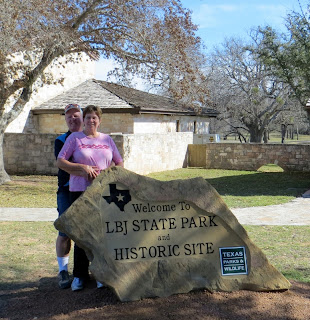 Our first stop was the Sauer-Beckmann Living History Farm. There wasn't a lot going on here today as far as the living history part, probably because it was late in the day. 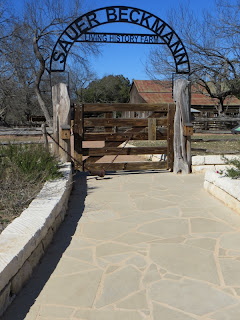 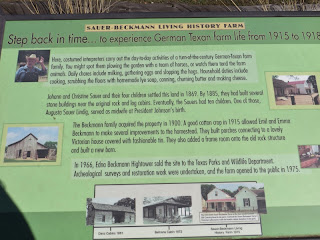 From the living history farm we had to hustle to the LBJ home to try to make it on a tour before they closed it down for the day. We arrived just in time to get in with the 4:35 p.m. group. No photos were allowed inside the house, but we could snap away to our heart's content outside. Below is Air Force One-half. This is how LBJ referred to the Lockheed jet that flew him to the ranch.

This is where LBJ spent 25% of his presidency. The big live oak in the front yard is 500 years old and is named The Cabinet Tree because LBJ would hold cabinet meetings underneath it. 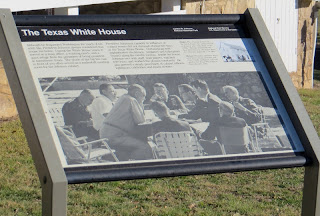 Ladybird and Lyndon's daughter was Luci. Here's the gift she was given two weeks before her 18th birthday. Nice! 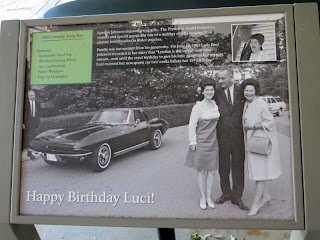 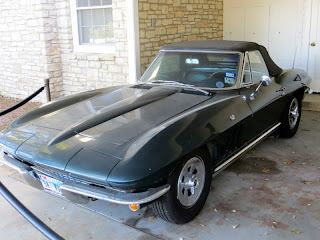 Also on the grounds near the house are buildings for the Secret Service and Communications teams. 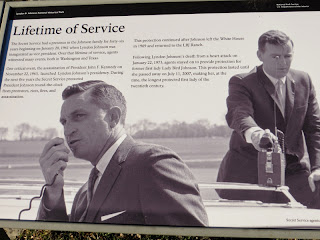 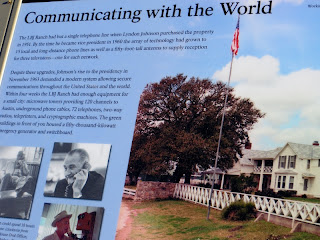 Lovely butterflies were flitting around and feeding on the mountain laurel plants in the front yard of the ranch. Here are a couple of photos of them. 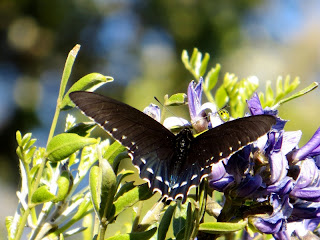 And what would a trip to the ranch be without a couple of photos of the big, wide-open spaces of the ranch itself? 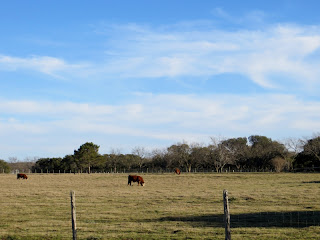 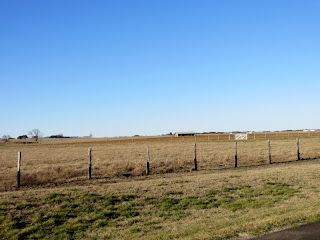 Wow, you're probably thinking, that's enough for one day. But wait, there's more. After the ranch we all thought Dairy Queen sounded really good. We stopped at the one in Johnson City for Blizzards. As we were sitting eating our Blizzards and sampling each other's flavors, a bizarre little "car" was pulled over by Johnson City's Chief of Police right outside the window of the DQ. The photo op was too good to pass up. Here's what we saw...

Not being very shy about asking strangers questions, I went up to the officer in his car, stuck my head in the window and said, "What is that?" He said, "I don't know, but I'm fixin' to find out. I stopped him because I didn't see a license plate, but now I see it." Frankly, I think the officer stopped him to find out about it and to have his picture taken by it. (Which did happen, by the way. He asked a curious bystander to take his photo next to the motorcycle.)

Pretty soon people were appearing out of nowhere to find out about the strange little vehicle. The owner said he gets stopped by police all the time. I can understand why when he recounted his story to Jim about going 165 mph, saw a policeman up ahead and had slowed it down to 125 mph by the time the policeman clocked him. He said that was a very expensive ticket. 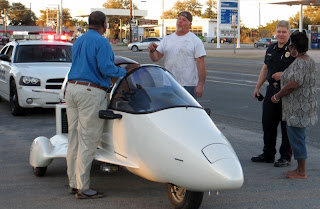 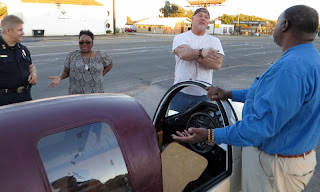 So there you have it...something you don't see every day (or maybe never!).

Welcome to new follower: New Age Nomad. We hope you find some tidbits to keep you interested in coming back.

And that was the end of our fun day with Jim and Peri, other 5th wheel full-timers. You can learn more about them at Tales from the Camping House.

It's getting late and tomorrow is another 10K walk for Bob and I, plus our RV park Olympics will be in the afternoon. I'm on a team called The Internationals and Bob is on the Dixie's Cups team. I will be competing in the washer toss and the team relay. Bob doesn't know yet what he'll be competing in.

And that's life on the road. Travel Bug propping her eyelids up. Good night.
Posted by TravelBug-Susan at 11:38 PM