Saturday's drive west on U.S. 90 was all new territory for us. We passed through Hondo, D'Hanis, Sabinal, Knippa, Uvalde, and arrived in Brackettville around 3:45 p.m. Our friends Kit and Jerry live near Brackettville and we were curious about the area.

Brackettville originated as a stage stop on the "Lower Road" to California. Upon our arrival in town, we saw old buildings and checked them out. The largest and most well preserved was the Kinney County Courthouse below.
But the best part of our exploration today, led us to Fort Clark (established in 1852) Historic District. Fort Clark was part of the U.S. Army's line of forts on the Military Road which went from San Antonio to El Paso, Texas. Click on the plaque below to read of this town's history, including the defense of frontier settlements, Seminole-Negro Indian scouts, Texas Rangers, and Confederate troops. 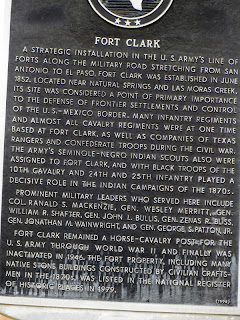 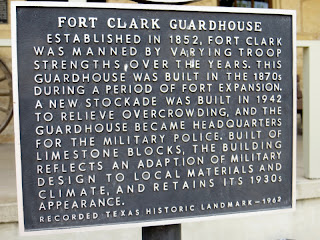 We walked part of Fort Clark, then hopped in the car and drove the rest. Many of the original buildings still stand. Information about the buildings comes from the Fort Clark Historic District Walking Tour brochure. The text and historical research of the brochure comes from William F. Haenn, LTC, Infantry, USA (Ret.) Copyright 2010 by the Kinney County Historical Commission.

Below is the Quartermaster Workshops building (1892). Inside were shops for wheelwrights, farriers (horseshoe repairers), wagon repairs, and early motor vehicle maintenance. Another use of the building by the 2nd Cavalry Division, from 1943-1944, was a four-lane bowling alley. 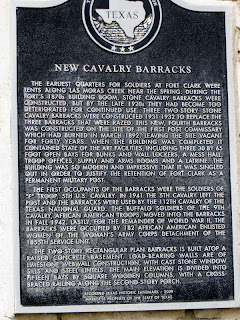 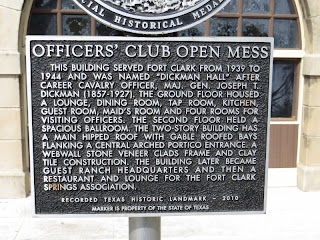 The Old Quarry Amphitheatre is still in use. The original purpose of the quarry was to provide limestone to construct stone buildings at the fort after 1880. "Glory Road" is performed here by the "Old Quarry Society." 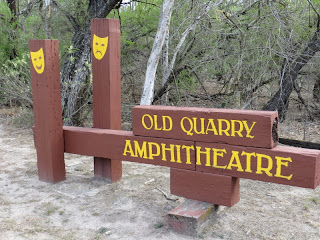 After we finished driving past officer's quarters, former hospital and the old tennis courts, we headed toward a residential development where a number of Rvers have settled. Their property consists of a huge covered garage for their RV with room to park golf carts, additional vehicles or even provide covered space for a hot tub. Adjacent to the garage is a small home. The area looked very inviting in some places.

While driving past the homes, we saw deer and wild turkeys hanging out in this yard. There were probably ten turkeys and six deer. Wow, that was a great wildlife sighting! 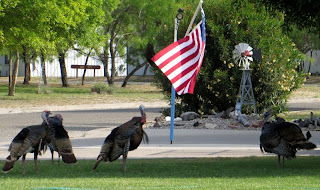 When we finished at Fort Davis, we hightailed it for home. Weather predictions called for severe thunderstorms and flooding. It was about two hours to San Antonio and we watched the thunderheads build up, not only on one side of us, but all around us. By the time we were almost in San Antonio, no more blue sky was left.

About 10:45 p.m., nature's show started. At first thunder rumbled in the distance. The thunder increased in volume until it boomed and cracked directly overhead.

I opened the rear blinds in the 5er (fifth wheel trailer) and watched the show, becoming increasingly alarmed. So much lightning streaked across the sky and for so long, it looked like daytime. As I watched, I saw a huge lightning bolt streak down across the street. I did not see where it hit. My concern grew because we have a very tall tree about one foot away from our living room slide. Luckily the lightning did not hit it! The thunderstorm raged for quite a while and torrential downpours accompanied the thunder and lightning. It was very exciting and nerve-wracking.

So ended another day. I leave you with two parting shots. 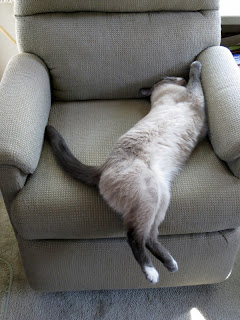