The weather forecasters were wrong about our weather. Fiesta officials were deliberating canceling the Texas Cavaliers River Parade tonight; however, first thing in the morning, the decision was made to "go on with the show."

Good decision. The weather was beautiful this evening. Bob, Delia (my co-worker), and I were given tickets from Fantasy Tours to attend the River Parade. Some of their attendees had to cancel and, rather than letting the tickets go to waste, the Wagon Master gave us the unused tickets. (A family visiting the RV park also got to attend.)

We rode the bus downtown and walked a few blocks to our seats. If it had rained we would have lucked out because our seats were under a bridge.

Delia loaned me one of her Fiesta headdresses to wear for the evening. You can't see them, but there are flowing curled ribbons hanging down our backs.

In case you have never heard of it, Fiesta is one huge, ten-day party/celebration that takes place in mid-April in San Antonio. Festival events take place in a multitude of locations around the city. Night in Old San Antonio (NIOSA) is a four-night culinary and entertainment party that takes place in La Villita (a historic, walled shopping area). NIOSA lasts from 5:30 to 10:30 p.m. Admission is $15 per person at the gate or $12 per person if you plan ahead and get a coupon at a local store before you go. You can buy just about any ethnic food your heart desires. (If you go to NIOSA, here's a word of advice: go between 5:30 and 7:30 p.m. because if you go later it will be so crowded you won't be able to move and will get carried along in the crowd.) Throughout each evening, you can opt to listen to bands at a number of different stages in La Villita. You can also see people with huge sombreros decorated with all sorts of things you'd see in San Antonio or Texas. Those hats must really be heavy!

Back to the River Parade...Bob came separately as he had a doctor's appointment on the other side of town. By the time he arrived, he had only missed four river floats. Seems they were having trouble getting the parade going, so there was quite a wait between floats at the beginning.
Many of the floats had bands on them so we were treated to different kinds of music throughout the parade. A unique feature of parades in San Antonio is people yelling at the ladies on the floats to "show us your shoes," which some of them do.

A funny story about "Show us your shoes." Apparently in some parades they say "Show us your boots." Well you know, boots kind of sounds like a part of a woman's anatomy. The person who kept hearing this phrase thought they were yelling about showing a part of the anatomy and couldn't figure out why they kept showing their boots. 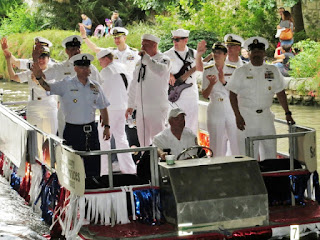 This was a fun evening of song and colorful floats. The weather stayed nice all evening. At the end of the parade, we were invited to ride back to the RV park on the Fantasy Tours bus. Very nice touch. Thank you, Gregg Bruce, for the invitation and tickets. We appreciate it.

Posted by TravelBug-Susan at 7:58 PM