Lots of things happen on a long road trip. This morning, I work up and Bob was gone. Let me tell you what happened. He could probably tell it better than I can, but I asked him to tell his story on my blog, but he wouldn't.
I slept in this morning, except for giving Sunnie his insulin injection at 7:00 a.m. Bob was gone and so was his bike. You see, he had read Howard and Linda's blog (RV-Dreams) a few years ago about the George S. Mickelson Bike/Hike Trail in the Black Hills. Howard wrote about his experiences riding portions of the 109-mile-long, rails-to-trails path and how to ride it so you had downhill most of the way.
Today, Bob decided to do the George S. Mickelson Trail from Harbach Park behind the Visitor Center in Custer, South Dakota. From our campsite at Fort Welikit Family Campground, he rode his bike downhill to the trailhead. Then he started his ride on the rails-to-trails multi-use path.
There is a user fee of $4.00 per day or $15.00 for an annual pass. He opted for the $15.00 annual pass so he could ride on the trail as much as he wanted over the five days we stayed here.
We decided on a pick-up point in advance because we didn't know if he would have a cell phone signal when he was done riding. We did talk when he was at the first place he thought he would want me to pick him up. The trail was so great that he decided to keep going to the beginning of the George S. Mickelson Trailhead in Edgemont, South Dakota.
I decided I better start driving to meet him since that was 45 minutes away from the campground. Mile marker 0.0 of the trailhead was in a beautiful park with history and interesting things to look at. While I waited, I meandered around the park and took photos. I also walked over to the post office and mailed postcards.

I had been at the park moseying about for 20 minutes when all of a sudden I saw this handsome man ride up on his trusty steed. I quickly went over to commemorate his 46-mile ride. 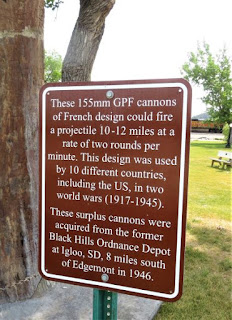 Bob told me about his ride. Early in the morning, the trail was prettier and more interesting. He saw two great horned owls, two snakes, a rabbit, many deer, a curlew, and skunk. The second half of his ride had a lot of flat fields that were boring and a canyon that was fascinating and interesting.
The day had warmed up since he started his ride at 6:00 a.m. He thought going to see Cascade Falls south of Hot Springs, SD, would be fun. There was a good reason to believe there was a swimming hole there.
Cascade Falls is downstream from Cascade Springs, so the water was very clear and cold. A big family had just finished swimming and sat down to eat. Bob had the swimming hole to himself. He found a nice pool and immersed himself to help ease his aching muscles and tush. You can see his big smile!
The falls were not very big, but it looked like you could jump into a deep pool off of some low rocks. He didn't go into that pool and just enjoyed a few minutes cooling down. I was glad we didn't spend much time there because there were big biting flies that I was just itching to get away from!
After Cascade Falls, we drove through Hot Springs, South Dakota, past the Mammoth Site, and into the historic downtown. After a quick stop at the bakery for snacks, we proceeded north to Crazy Horse Memorial.
Crazy Horse is privately owned and charges an admission of $12 per adult. It is $4 extra per person if you want to ride a school bus 3/4 mile closer to the mountain. We could see it just fine from the Visitor Center. The admission also includes admission to the nighttime laser light show on the face of the memorial.

Attractions at Crazy Horse Memorial include a Visitor Center with a 20-minute movie, "Dynamite and Dreams," about the sculptor and the history of carving Crazy Horse out of the granite mountain. There's a museum with the history of buffalo, art gallery, the sculptor's original log cabin, an awesome gift shop, and a restaurant.


The collector cards below were included in Red Man Indian Chiefs (1954) packs of chewing tobacco. There were about 30 of them on display. Interesting to read them. 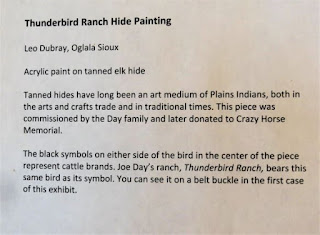 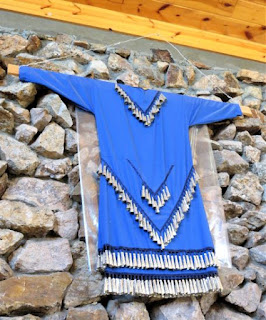 One part of the museum was dedicated to buffalo. The white men killed as many buffalo as they could and left them to rot, knowing that the Indians relied on them for everything from food to housing. Buffalo on the plains were massacred from moving trains. They wanted the Indians to go to the reservations. It's a pretty depressing period in our history.
Thankfully, there were also people who wanted to save the bison. Below is a good piece on the women who helped save the buffalo. 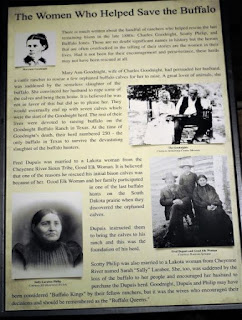 When we finished inside the museum and Visitor Center, we went outside to see other sculptures by Korczak Ziolkowski. My favorite piece of his, besides the big carving on the mountain, is Nature Gates. It is made up of many smaller panels of birds and animals. 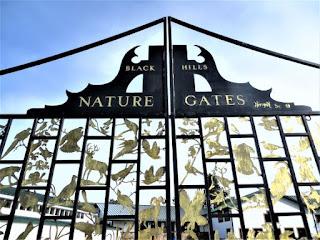 Detailed panels of the Nature Gates... 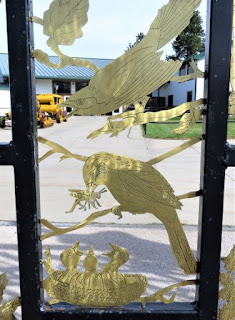 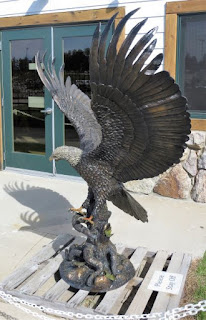 When we finished our afternoon exploration of all Crazy Horse Memorial had to offer, we went back to the 5th wheel to have dinner and rest before heading back at 10:00 p.m. for the laser light show.
To tell you the truth, we didn't find the laser light show to be much fun. It was hard to see the images on the rock and it was really hard to hear. We sat in our cars in the parking lot to watch the show. We had to keep our windows down to hear the speakers they had set up around the parking lot. But the quality of the sound was terrible. You couldn't hear the words to the songs or the reading of quotes. I would skip the laser light show.
Anyway, overall it was a great day. We were tired and headed back to the 5th wheel for some much-needed sleep. I was glad Bob didn't leave me for good. LOL.
Posted by TravelBug-Susan at 10:30 PM