By 9:30 a.m. Saturday we were hiking the Historic Railroad Trail in Lake Mead National Recreation Area. We walked the five-mile portion of the trail from the Lake Mead Visitor Center through the five tunnels and back to the parking lot. Huge vistas of mountains, Mojave Desert, train tunnels, and Lake Mead were the main draws of this walk.

The trail follows the old railroad bed that was used by trains taking supplies and parts to build Hoover Dam. Along the trail are markers telling of the hardships faced by the dam workers and their families, animals in the area, and why the tunnels are so big.

The clear morning air was crisp; very good walking weather. Don't expect solitude and quiet when doing this hike. Sightseeing helicopters flew over frequently and this is a very popular trail for bike riders, joggers and walkers. The grade is easy and the scenery is great. 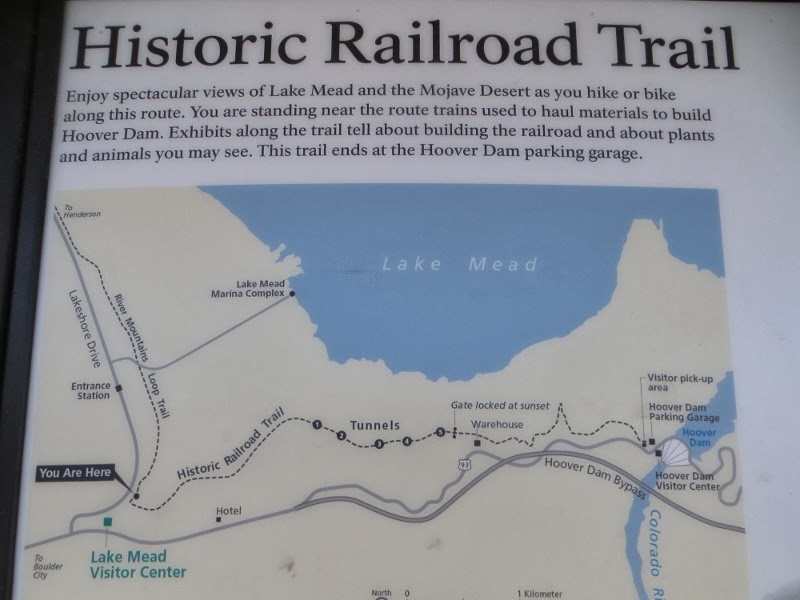 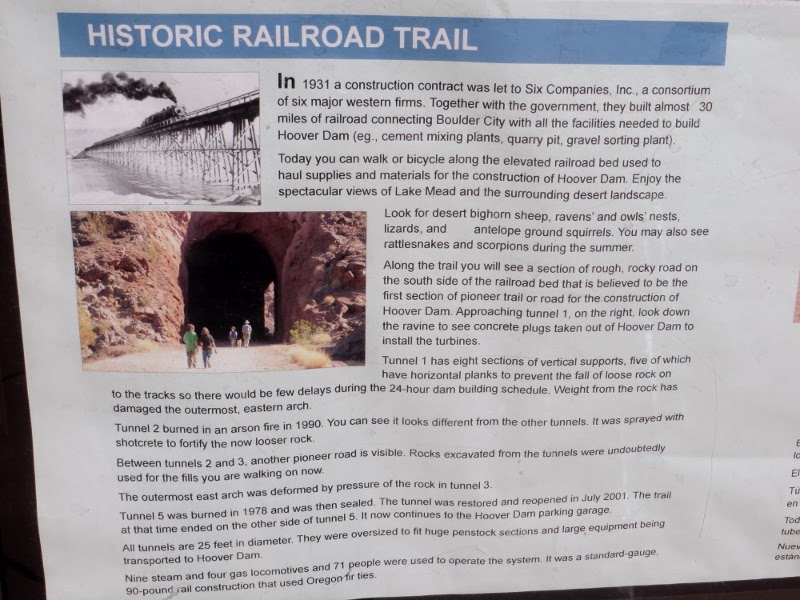 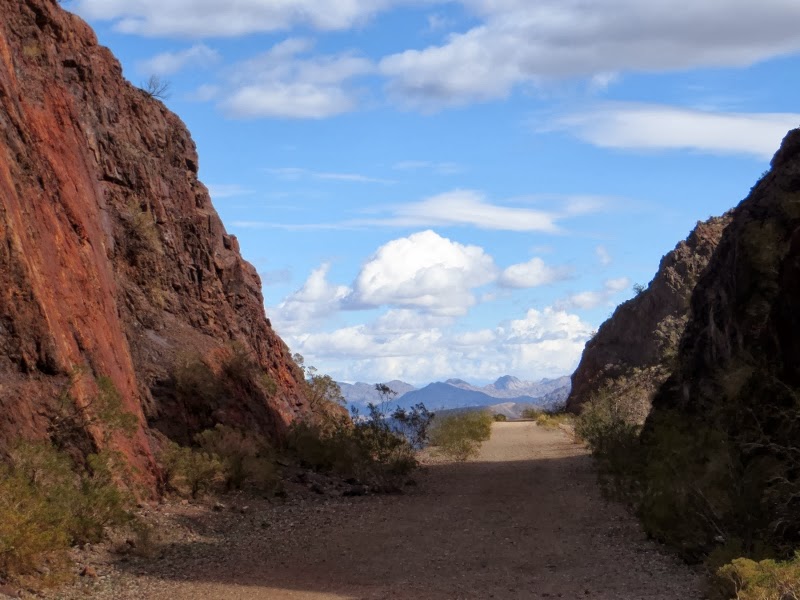 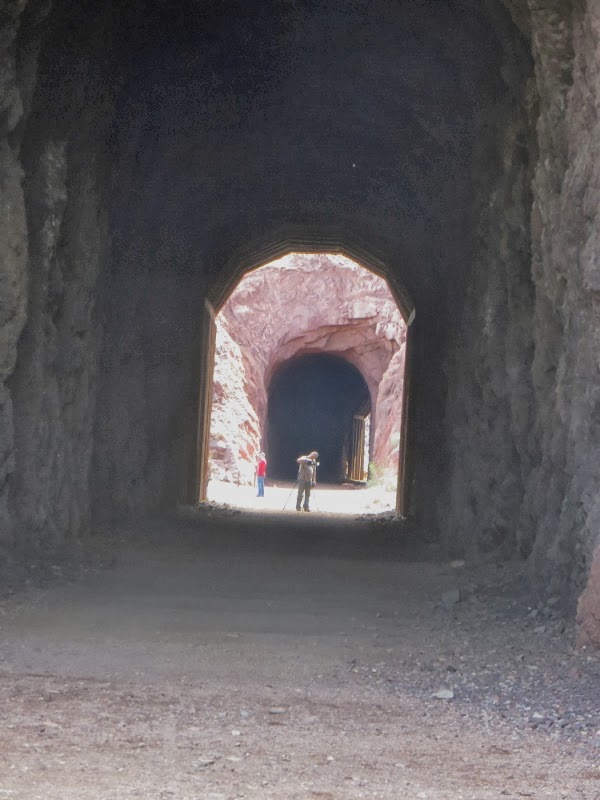 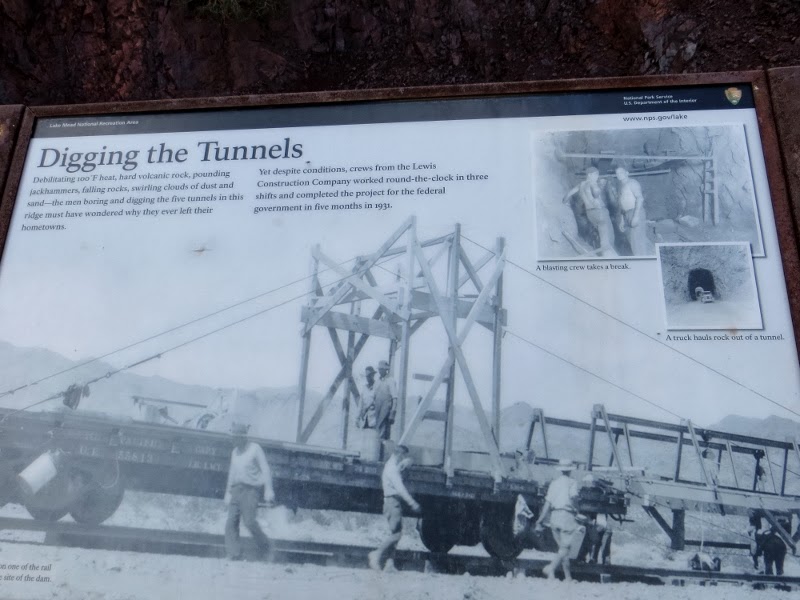 How can you not love the views in the following photos? 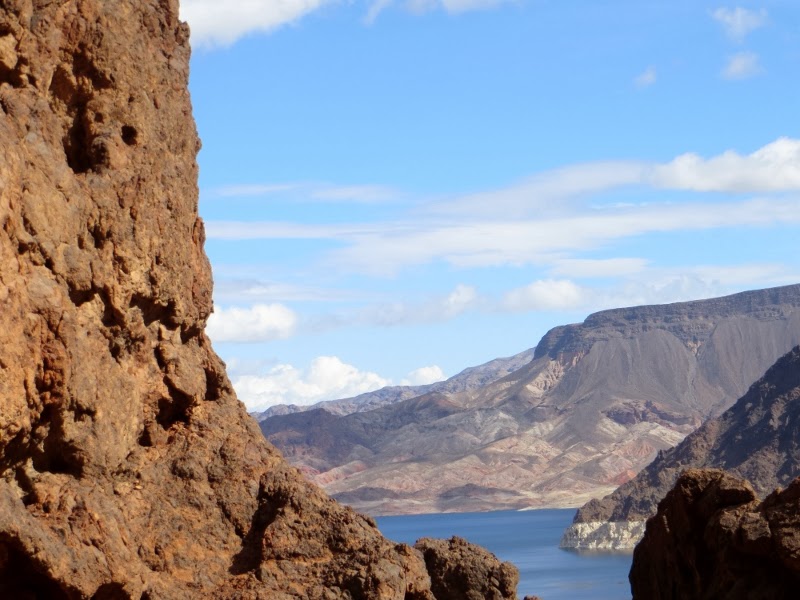 Looking east from the trail, you can see Lake Mead RV Village (in the bottom center of the following photo). 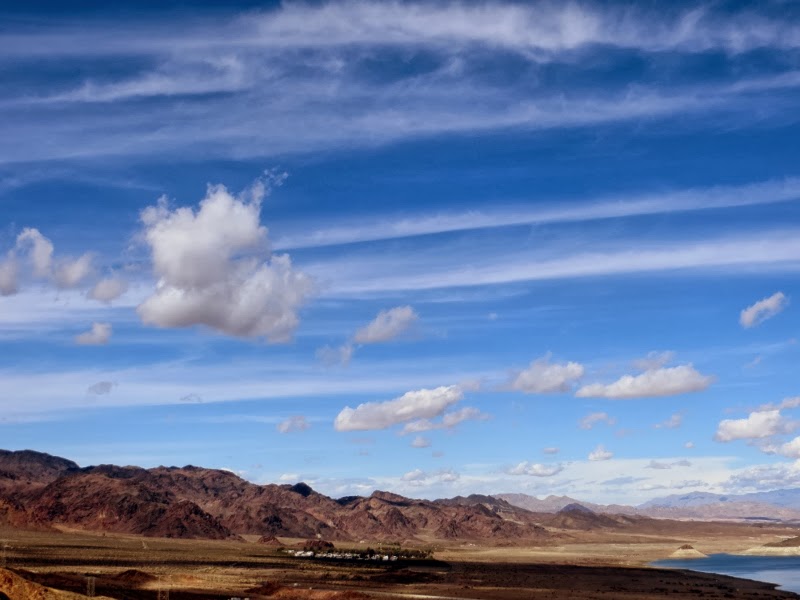 After our walk, we headed into Henderson to have lunch with Louise and Laura at Mimi's Cafe. We spent an hour or two at their house. I helped Laura look for cheap airfare to San Antonio and Bob helped his mom set up a budget in Excel.

Later in the afternoon, we drove into Las Vegas to have dinner with my cousin, Cindy, and John. They thought Italian sounded good. We suggested Battista's Hole in the Wall. Bob and I had eaten there years ago and remembered it was very good. We had a great dinner.

One funny story: As we sat chatting, an accordion player was a few tables away playing "Happy Birthday." When he came to our table, he played a little bit of a tarantelle, asking us to listen to the tone of the song. We nodded our heads, I gave him $2 and said we'd like to hear another song. He grabbed the two dollars and said, "I've got eight other rooms to play," turned on his heels and left. We never heard him play again while we were there. Very strange. We all laughed about it, but thought it odd.


After dinner, we took John and Cindy on a little driving tour. They had never been to the Fremont Street Experience. You just haven't totally experienced Las Vegas if you haven't been to Fremont Street. Here are a few impressions of our walk through Fremont Street: 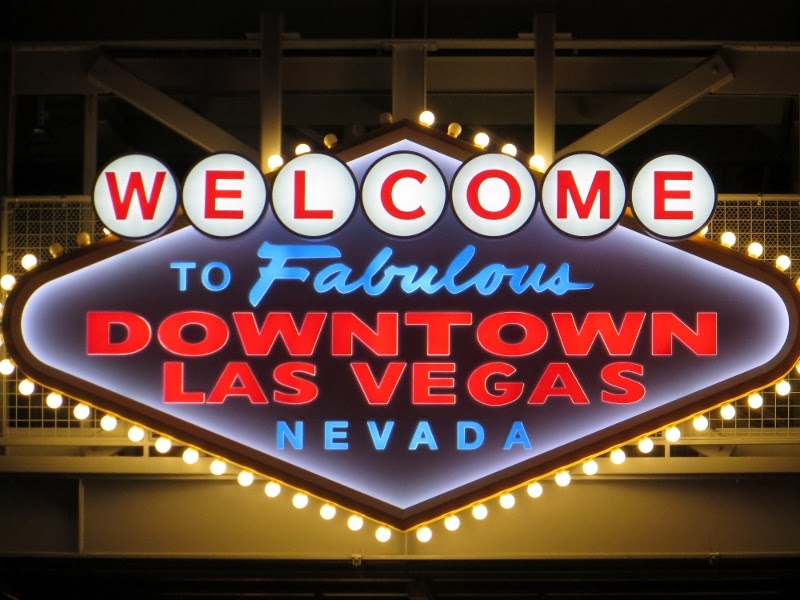 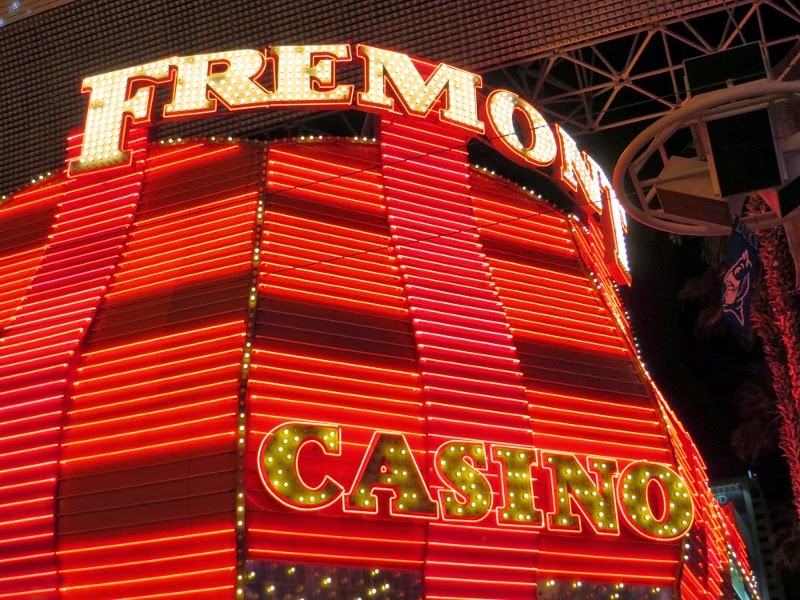 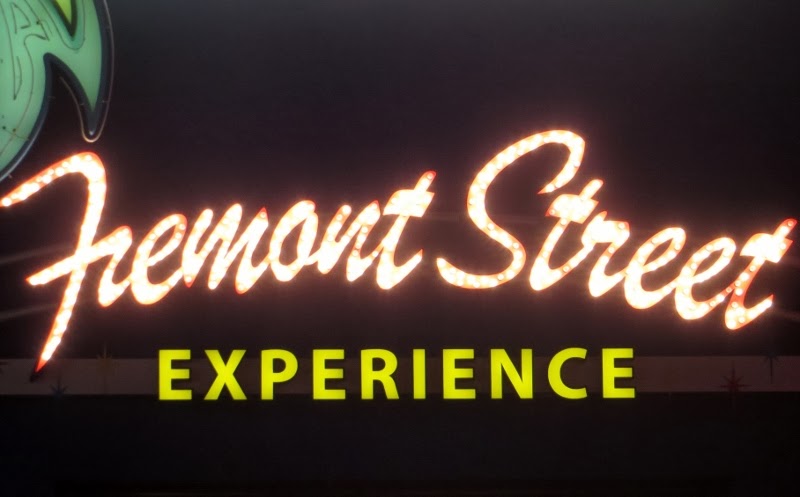 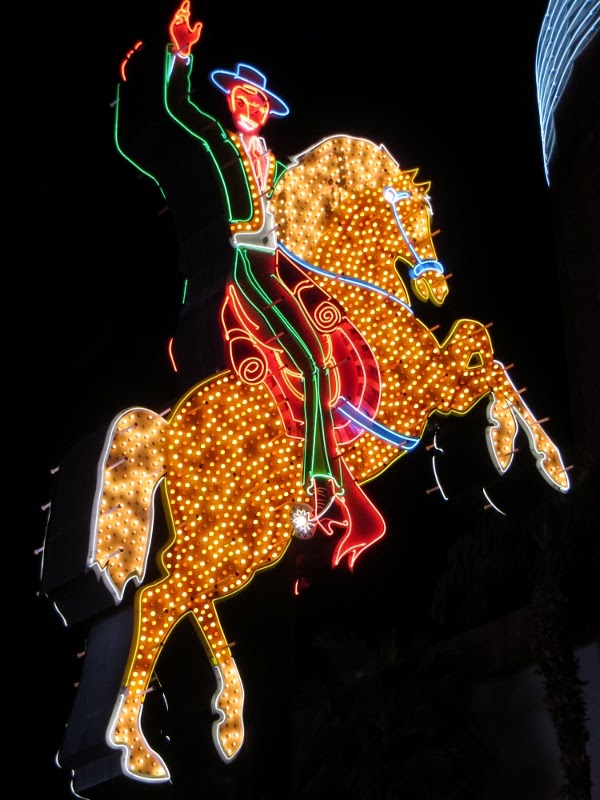 The following restaurant is politically incorrect and a sign of our times. It is the Heart Attack Grill: Over 350 Lbs Eats Free. Instead of bibs, patrons are given hospital gowns to put on over their clothes. 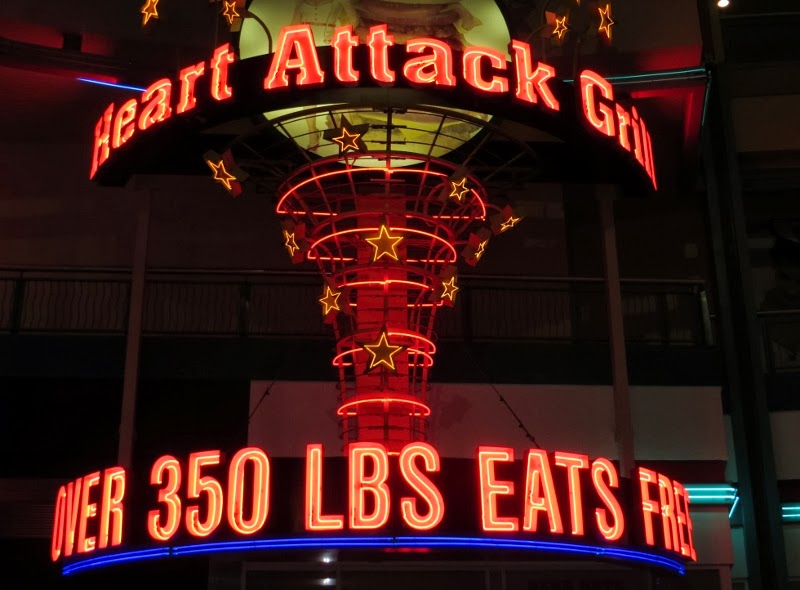 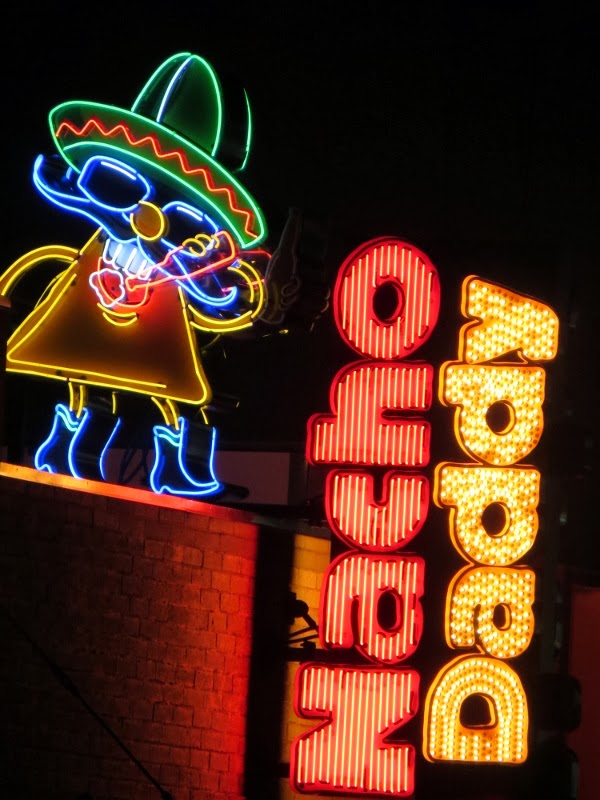 When we finished at Fremont Street, our other cousin, Kristin, whose flight had been delayed three hours, called to let us know she had landed. We headed to the airport to pick her up, but missed our exit from I-15 and ended up going another five miles before we could turn around and go back. She was patiently waiting for us when we arrived.

Bob wanted to play tour guide some more so we took Kristin, Cindy and John through the main part of The Strip, then back to their timeshare. We bought wine and chocolate, then sat around catching up for an hour or so. Cindy's business partner, Rich, also joined us in the room for wine and conversation. Cindy, John and Rich were in Las Vegas to attend the ReMAX real estate convention at Mandalay Bay. It was time for all of us to get some sleep.

We said our good nights and headed back to Lake Mead RV Village. I think it was 11:00 p.m. when we got home.

Posted by TravelBug-Susan at 1:05 AM