Last Friday night, we took our lawn chairs and headed to Mad Mack's Burger Company for dinner, then over to Mission San Jose for a "Music Under the Stars" concert. We hauled our folding chairs to the lawn inside the mission and set up in a good spot to listen to the concert. The USAA Concert Band, Chorus and Jazz Band were going to play marches, patriotic songs, Western-style music, country and pop.

Quite a few people had brought tables, tableclothes and a whole meal to have a picnic before the concert. Everything was set up and the musicians were warming up.

A lot of work had gone into setting up the concert: flyers printed, stage and lighting tower erected, musicians in place with their instruments, chairs set up for dignitaries, and lighting and port-a-potties brought in.

We settled back for an evening of lively music. First the dignitaries gave a welcome, then an award was handed out and they spent about 15 minutes patting themselves on the back. When it came time for the music, the lightning started just behind Mission San Jose. The National Anthem was played and we all sang along. 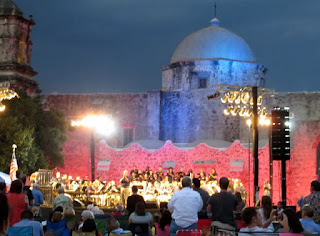 The bandleader announced that severe weather was headed our way. He said they would play their encore first. The encore consisted of the songs for each of the branches of the military. All members of each branch of the military or their families were asked to stand when their branches song was played. They played one more song. Big flashes of lightning were lighting up the sky to the north and west of us.

The bandleader said, "Please gather up your chairs and belongings and make your way to the safety of your cars. No need to hurry, you have plenty of time, but we want you to be safe." That was the end of the concert. We didn't get any rain but the lightning was quite a show. It was the safest thing to do. At least we got to hear a few songs.

As an aside, this concert was the rain date for a concert that was cancelled around Memorial Day when there was so much rain that the lawn at the mission was soaking wet. The bandleader joked about it tonight saying their concerts are called the "drought busters." We will try to see the concert again in the spring.

Sunday, Bob and I were up before dawn to do an 11k (6.8 mile) Volksmarch from Mission San Jose to Mission Concepcion.  Since the Missions weren't open at that hour, we couldn't sign the walk book or stamp the Volksmarch book. But because our RV park is right on the walk route and we know it by heart, we walked anyway. Start time 6:40 a.m., end time 9:15 a.m. It was a beautiful, cool morning and we finished before it got too hot.


The purple, pineapple-shaped flowers above are not thistles. True thistles are in the aster family along with sunflowers and daisies The eryngo is part of the carrot family and is related to celery, parsnips, coriander, fennel, parsley, caraway and dill. Who knew?

After our walk, I showered and dressed to go to the San Antonio Ultimate Women's Expo. Five ladies from the RV park attended today: Brenda, Pam, Lisa and Randy. The Expo had a fashion show, complimentary hair styling, wine tasting, cooking demonstrations, exhibitors, clothing, and guest speakers. It was a fun way to spend the afternoon. 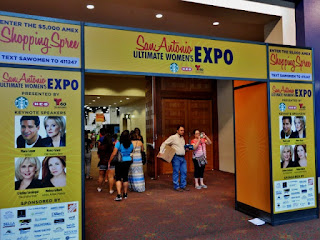 Regis Salons had about 12 hairstylists doing complimentary haircuts. Randy signed up for a haircut as soon as she got there at 11:10 a.m. Her number was 78. Apparently so many women signed up for haircuts on Saturday, they couldn't get to all of them, so those ladies had to come back today. They were first in line. Randy's number was called about 12:40 p.m. That was just about the time of the fashion show, so she and Lisa missed the fashion show.
Brenda, Pam and I saw the Fashion Show. Unfortunately the emcee was rather lame. After about the fourth model, his cue cards weren't matching the outfits. Instead of slowing down and trying to find the correct card, he stopped describing the clothing and resorted to saying, "You can find these and other fashions at Dillards [the sponsor of the fashion show]."

After Lisa, Randy and I finished looking around the Expo, we found Brenda and Pam to ask if they'd like to go to lunch with us. They had arrived at the Expo after us and they wanted to finish looking around. Randy, Lisa and I ate at The Republic of Texas restaurant on the River Walk. We sat outside next to the river.

I had The Republic of Texas Cilantro Chicken Plate. The waiter said it was a very good meal. I have to agree; that was the best chicken dish I have had in a long time. The chicken breasts sat on a bed of pecan wild rice and a light cilantro sauce covered the chicken. Around the outside edge of the plate were steamed vegetables of many kinds. So tasty!

It was Happy Hour and sangria was $4 per glass instead of $5.95. Lisa and Randy each had red sangria and I had peach sangria. Wow, that made my taste buds happy!

Looking back at The Republic of Texas restaurant on the River Walk. Our table was the one you can see on the end. 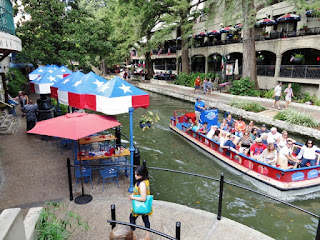 Now you're probably wondering, "What about the wallpaper in the title?" Well, we had some old wallpaper accent strips on our walls that were getting old and peeling off. The wallpaper was pretty easy to peel off. The paste, on the other hand, is a nightmare to remove. It's a vinyl on vinyl type of paste. I have tried spray on wallpaper remover. (Didn't work.) Also tried Downy mixed with water which is supposed to remove wallpaper glue. (It doesn't.) So far what works best is rolling the old glue off with my fingers. BUT what that does is give me blisters on my finger pads. OUCH! Anyone out there know how to remove vinyl on vinyl (VOV) wallpaper glue?

That's it. We're up to date. Have a good week. Travel Bug out.


Posted by TravelBug-Susan at 1:35 AM