My friend, Susan M., who is SW Regional Director of Volkssporting, asked Bob and I if we would like to take a 10k walk into Mexico from Eagle Pass, Texas. We would be walking with Clay and Katie Baulch who live in the Eagle Pass area and want to sanction a Volksmarch from Eagle Pass into Piedras Negras, Mexico.

And that's how we ended up driving two hours with Susan and Darren, through pretty roadside wildflowers, under a brilliant blue sky to Eagle Pass, Texas, a town of 50,000 on the border with Mexico. First we had lunch at Wendy's, and then we were to meet Clay and Katie at noon at a park next to the border crossing.

Passports in our packs, along with water and driver's licenses (just in case), we set off following the directions Clay had written for the potential walk. Clay and Katie assured us they cross the border here all the time and haven't had any problems in Piedras Negras, Mexico.

From the park, it was about a two block walk to the border. Since we weren't in a car, we walked up to the U.S. border crossing window and paid our 50 cents to cross the bridge.

When we reached the other side of the bridge, a Mexican border guard stopped us and asked what we were doing in Mexico and we told him we were planning a walk. No problemo.

Where we walked was only a minute portion of Piedras Negras, Mexico, a city of 500,000; ten times bigger than Eagle Pass, Texas. From our vantage point, we saw only the river and Gran Plaza.

Clay and Katie made a big deal about the veterinary clinic in Mexico. Eagle Pass, Texas,  apparently does not have a veterinarian in an office, only a mobile vet. 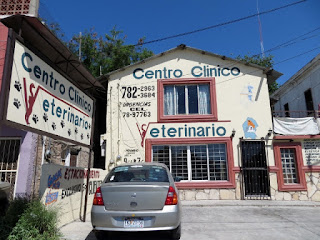 We walked about three blocks on the city streets, then headed down to Paseo del Rio, a broad path along the Rio Grande.


Along Paseo del Rio is a huge retaining wall to prevent erosion when the Rio Grande reaches flood stage. The river then spreads out along the lower U.S. side of the river until it subsides.

From the river we walked up ramps to the Grand Plaza. It was Palm Sunday so all the vendors weren't out today.
Below is a huge billboard advertising work in security showing macho/macha men and women looking fit and well fed. This is one backdrop of the Gran Plaza. 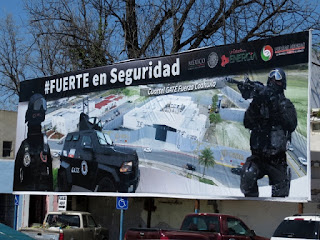 When we finished walking the perimeter of Gran Plaza, we paid our 25 cents to cross the bridge back to the United States.

After the short walk across the bridge, we came to U.S. Border Patrol. There was a line to walk into the United States. It took maybe 10-15 minutes. We presented our passports to the border patrol agent, he asked us one question, and we were on our way.

The walk then took us through business and residential areas of Eagle Pass, TX. I'll tell you what, this side of the river didn't look much different from the Mexican side. 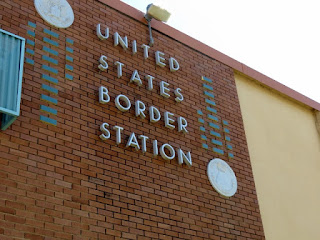 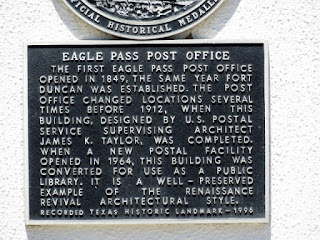 Clay and Katie explained the building below. We saw a few vans parked in front of the building and people coming and going with suitcases. Apparently this is a van service that takes people coming in from Piedras Negras to San Antonio for $10 per person one way. Wow, what a bargain for a two-hour drive. It looks like this is a booming business.

We finished the walk on the grounds of Fort Duncan.

After we finished our walk, I wanted to get a photo of the playground across the street. It's so unique, a work of art. The kids looked like they were having a blast. 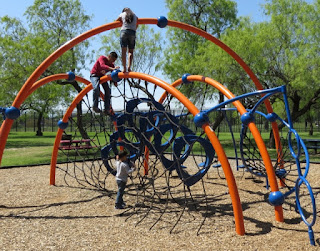 After the walk, Susan M., Darren, Bob and I drove over to the Lucky Eagle Casino. None of us had been there before. We took the opportunity (after our 6.2 mile walk) to walk through this large casino. We didn't gamble, not even a penny.

Then it was back to San Antonio for us. Good walk.

Susan's considering submitting the walk we did today as a Volksmarch, but there are a lot of logistics, foremost is the American Volkssport Association obtaining insurance.  People who come to walk would have to have their passports with them. We'll see how it goes.

Posted by TravelBug-Susan at 1:00 AM