Oh, the things you learn when you walk. The red stick? Is that Big Red chewing gum? A stick of pepperoni? Or what?

Baton Rouge means "the red stick." Why? Well, that's what I learned when I looked into what Baton Rouge meant after Susan Medlin and I did the 6k Capital walk on January 12.

But I'll get to that later. We left San Antonio at 6 am, headed for Mandeville, Louisiana, and the Louisiana Parishes walks created by Helen Hull.

We made a quick rest stop at the Beaumont, Texas, visitor center. There were a few things to check out.

Baton Rouge was our first walk stop. This walk was in addition to our Louisiana Parishes walks.

We arrived about 2 pm and went to the start point at a fitness center downtown. Both of us wanted to arrive in Mandeville around 5 pm. That gave us over an hour to do the 6k (3.8 mi.) walk.

Bob and I had done the Baton Rouge capital walk a few years ago. We did not have time to see the interior of the capital or the Old Capital. Today, we were again in a hurry and did not go in either of the capitols.

The walk was awesome, though. Our weather was lovely. It was in the high 60s with a breeze. The city's name, Baton Rouge, or red stick, is described on the VisitBatonRouge.com website:

"Story has it that long ago, this area in Louisiana along the mighty Mississippi was occupied by two indigenous tribes, the Houma Indian Tribe and the Bayougoula Indian Tribe. To settle a border conflict between them, the tribes used a cypress pole to mark the boundary dividing their hunting grounds at an area now known as Scott's Bluff.

"This marker on the east bank of the Mississippi River caught the eye of French-Canadian Pierre Le Moyne d'Iberville while making his way upriver during an exploration in 1699. He and his men saw the bloodied cypress pole on the bluff, adorned with animal parts and stained red from the tribes' latest haul, and dubbed the area 'le bâton rouge,' French for 'Red Stick.'

"In 1810, the area became part of the colonies and in 1817, the town was officially incorporated as Baton Rouge. Locals still lovingly refer to the city as 'The Red Stick.'"

Let's go for a walk! We started out in the heart of downtown on Government St. and made our way to St. Louis St. First up, we walked past the performing arts center, city hall, library, and courthouse.

Our route took us along North Boulevard where we passed the Old Governor's Mansion. It was built in 1930 and was first occupied by Huey Long who was later assassinated.

In the photo below, it is impossible to read about Old Brad, a horse buried in front of the Washington No. 1 Firehouse. Here is a link to the historical marker so you can read it: Old Brad. 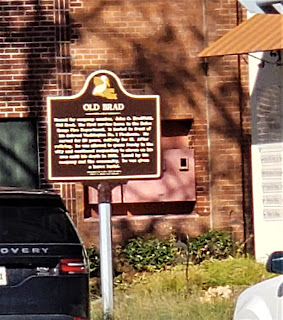 We are now on Spanish Town Road heading for the state capitol. First, we passed St. Joseph Cathedral established in 1792. The present church was built in 1853. 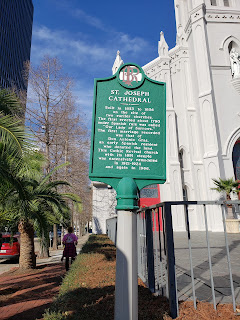 "The Patriots" and "The Pioneers" statues in front of Baton Rouge's Capitol skyscraper building were built by Lorado Taft in the 1930s. "The Patriots" monument honors those who died defending our homes and rights.

"The Pioneers" statue pays tribute to the Native Americans who originally inhabited the region, the French and Spanish colonists who explored the area in the 17th and 18th centuries, and the Americans who made their homes here in the state's earliest days.


When we left the front of the capitol, we didn't stay on the street in front of it (as our directions indicated). We ended up going through a park to the Arsenal Museum instead of around it. It was easy to find our way, though, because we could see the Liberty Bell replica mentioned in the route description.
After we passed the Arsenal Museum, our written directions seemed to have a direction missing; but, because there was a map on the back of the sheet, we found our way.
Below is a marker titled "Tomb of the Unknown Soldier - Never Forget Garden."

Hundreds of black-bellied whistling ducks were on the banks around Capitol Lake.  I have never seen so many in one place before! 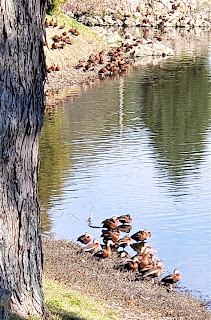 A wood duck was majestically paddling by. He stretched his neck up as if posing for the camera. Their coloring is so dramatic. 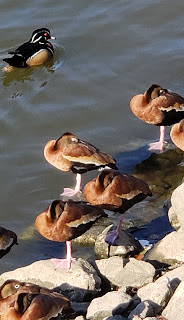 On the home stretch back to the car, we passed the pentagon barracks. I did not get a good picture of these buildings, basically a four-sided pentagon. There was a fifth side to the pentagon barracks, but the fifth side was so poorly built, it was razed not long after it was put up. I had to look up the significance of these buildings because there was only one historical marker, but it was almost overgrown by bushes.
From the Historical Marker Database (HMDb) online:

"In 1825, four military barracks were built to support the U.S. Army arsenal that occupied much of today's Capitol Park. A fifth barrack that completed the pentagon arrangement was built so poorly it was demolished shortly after construction. Lieutenant Colonel, and future U.S. President Zachary Taylor, "Old Rough and Ready," oversaw production of the barracks and lived nearby. Later, when Louisiana State University replaced the military installation, students lived in the barracks. Today, they lodge Louisiana lawmakers during legislative session."

After we passed the pentagon barracks, we came to a Louisiana Civil Rights Trail marker about the march from Bogalusa to Baton Rouge. It was called the 105-mile gauntlet. 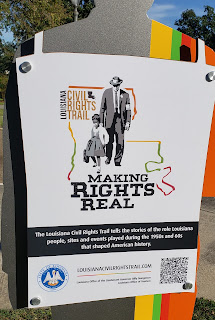 At this point, Susan Medlin and I split up. I had to use the facilities at a hotel and she wanted to head back to the car. My 69-year-old bladder definitely requires some restrooms along the walk.
The photo below is a mystery. This is listed on the National Register of Historic Places, but I did not see a historical marker describing its use or purpose. I did a "Search image with Google lens" and found that this is a Baton Rouge Waterworks Company Standpipe in a unique Gothic style from the 1800s. It was on waymarking.com. It's amazing to me what I can find with different internet search tools!
It is sad to say, I have been in Baton Rouge doing walks twice now and I still have not seen the inside of the Old Capitol, even though it is one of the top tourist attractions in Louisiana. Both times I have been by it, it was too late in the day and it was closed. Maybe the third time I go will be the charm. (Yes, I know I mentioned this earlier in the blog, but these are places I really want to see the inside of.)
Baton Rouge Station is a historic train station in downtown Baton Rouge. The two-story main block and the two one-story wings in Classical Revival-style stand directly across from the Old State Capitol. The building was added to the National Register of Historic Places on May 19, 1994, as the Yahoo and Mississippi Valley Railroad Company Depot. It now houses the Louisiana Art and Science Museum. I will have to come back to tour this museum.
Our walk instructions said to take River Road to Government passing the USS KIDD, a WW II Fletcher-class destroyer restored to a 1945 configuration. Even though I was "passing it," I could not see it because the levee was in the way. However, there were stairs to the top of the levee, so I went up to check it out. First, I was impressed by the Baton Rouge City Dock.

Then I came to the USS KIDD. It was kind of hard to see because of where the sun was setting. Visitors can tour 80% of the ship on five levels. But not today, it was already closed.
I didn't see a way to get down from the levee at the USS KIDD because there was a big sign on the stairs there saying those stairs were for the USS KIDD Veterans Museum. So, I went down the grassy bank of the levee.
As I made my way back to the fitness center and Susan's van, I came within 6" to a foot of getting run over by a car! Our instructions said to "take Government St. to St. James. LEFT on St. James to the fitness center." However, I puzzled over the walk instructions because it would be a RIGHT on St. James to the Fitness Center but straight was even easier, except for the traffic light.
I waited at the light for the "WALK" signal so I could go straight. I could see a car on Government St. in the left lane waiting to turn left on St. James. When the signal turned to "WALK," I started across St. James. I was keeping an eye on the person wanting to turn left toward me and it looked like she had started to turn but she hesitated. I thought she had seen me.
But, no! All of a sudden she floored it and headed right toward me! I had to jump out of the way. At the last second, she saw me and swerved away from me. I looked right at her and her eyes were huge like saucers. She mouthed, "I'm sorry." She looked totally mortified that she almost hit me. I was pretty mortified myself! You never know what's going to happen. Thankfully, I lived to see another day with my limbs and life intact.
I made it back to Susan's van and we continued to our destination in Mandeville.
The 6k Baton Rouge walk had a lot of great things to see. If you go, allow extra time to see the Capitol and the Old Capitol. Watch out for traffic at the Government Street traffic lights!
Posted by TravelBug-Susan at 8:30 PM