We are on the second day of the Louisiana Parishes walks. Today's walks included Bogue Chitto State Park walk in Washington Parish and the town of Greensburg in St. Helena Parish. It was a rather interesting day.

From our hotel in Mandeville, we drove 33 miles to Bogue Chitto State Park. Inquiring minds want to know, "What does Bogue Chitto" mean? It is Choctaw for "large stream." This beautiful southern swampland is one of the least disturbed in the United States.

The park opened at 8 am. We arrived at the entrance gate at 8:05 am. There was a cone in the lane at the window where we were supposed to pay. 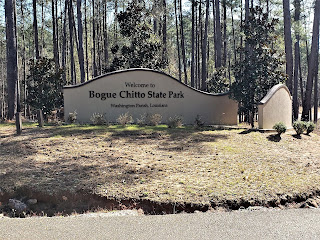 Susan parked the van in the lane without a cone, but with a drop-down arm. We walked to the window. The ranger asked us why we didn't drive up to the window. We explained there was a red cone in the way. She looked chagrined that no one had removed the cone yet.

As a senior (over 62), I received free admission to the park. Susan tried to pay, but the ranger said, "Don't worry about it." I think the ranger felt bad that we had to get out of the car to get to her window. The temperature was 39, but with windchill felt like 31.

Once through the entrance gate, we drove a few miles through the park to get to the Day Use Area. The Day Use area was deserted. Susan and I were the first ones to get there. We waited and slowly the others showed up. We donned our cold-weather gear and used the facilities.

When Helen arrived we were handed our directions and were told to start at the Beach Day Use Area. We were to walk from our car to the Beach Day Use Area, go to the right of the restrooms, follow the beach to the end, and then turn toward the trees, head into the forest and find the trail. Both Susan M. and I heard the exact same directions.

We set off first and walked to the Beach Day Use Area, went to the right of the restrooms, and then down to the beach. We walked in the sand for at least 1/2-mile before the sand petered out and we were faced with the river. Susan M. searched for a way up the steep bank. She could not find a trail.

I turned back and made short forays up the side of the bank where it became less steep. I found one place where someone had tried to drive through but had sunk in deep mud. They had been able to get out, but I certainly did not want to walk through that.

Yay! We did great after the false start. Now, all we had to do was watch for the Red Trail markers.

The forest was beautifully lit in the early morning light. After about 1-1/2 miles, we came to a circle drive. Here was the split in the route where we could choose 5k or 10k.
After two 10k walks yesterday, my body said it's okay to do the 5k. Susan M. decided to do the 10k. We parted ways and I headed back to the Day Use Area on park roads. Susan continued on trails through the forest. I had plenty of time to think, take photos, and enjoy the beautiful day as I walked back to the car by myself. The campground is quite nice here, but it is called "Bottomland RV." I would question staying around here if there is any chance of rain. There would probably be a lot of mosquitoes when it's not freezing out.
I made a video of one of the low spots in the park. It's quite pretty there with a memorial bench overlooking a creek. (Oops, that video file is too big, so I included a video of a peaceful creek nearby.) The Day Use Area had a nice SplashPark. There's a button to push to make the water flow. It runs for about 20 minutes and then you have to push the button again

I had quite a wait before Susan Medlin and the rest of the 10k group came back to their cars. I had time to take the photos, change my clothes and shoes, and talk to a mom and her son at the playground area.

When the first 10k walker came back, I asked him if he had seen Susan because we had left before everyone else. He should have passed her on the trail, but he had not seen her. He did explain that he took a shortcut, so that was probably when he passed her.
When Susan arrived with the rest of the group, I was relieved that she hadn't gotten lost when she was by herself. She was really happy when another group of walkers caught up with her. She said she ended up doing a 12k, including the stretch we did on the beach.
In between walks, we ate lunch at The Salad Station in Amite City, Louisiana. A few other Volksmarchers stopped to eat there as well. Basically, it was a salad/pasta/entree buffet bar. You chose a bowl and put what you wanted in it and then at the cash register you paid by the pound. They also had soup.
From there, we drove to Greensburg, Louisiana. The first thing we did upon driving into town was get lost trying to find the starting point at the courthouse. We turned north when we should have turned south. We drove around the block a couple of times when we discovered we needed to cross the main street of town to the south side. Bingo! We found the courthouse.
After Susan did the 12k walk earlier today, she was fine with doing the 5k walk in Greensburg. The town was very depressed. There weren't many sidewalks, so we walked on the edges of busy roads. The quietest places we walked were the cemetery and the city park. There were some interesting tombstones.
After we left the cemetery, our instructions told us to turn left on LA-37 when we needed to go right. It was good we had a map. With the map, we did not go out of our way.
LA-37 was a very busy highway with large trucks traveling at a high rate of speed. We hugged the grassy strip on the side of the road. After about 3/4 mile, we turned off onto a side road to go to the park. At first, we had trouble figuring out where in the park we were supposed to go to find the walking path. Instructions said to veer left onto a dirt path. The thing is, we had to veer right, go down the dirt path, and through a gate to find the walking path behind the park.
The walking path was very quiet. There was one other walker on it when we got there. As we walked back toward the road (3rd St.), we heard a vehicle come racing down the road. It was a pickup truck, followed by a second pickup truck going equally as fast. Again, there were no sidewalks, but there was a grassy area in front of the park we could walk on.
We headed toward LA-43 which would be the main highway taking us back into downtown. As we headed toward LA-43, a burnt orange mustang came flying down the highway, we estimated it was going about 90 mph. That road had no sidewalk and very narrow shoulders with a ditch.
Susan and I were so happy to get back to the car and leave that town. I only took one photo and you know that's very unusual for me! We don't recommend Greensburg as a place to visit.
From Greensburg, we headed to our overnight stop in Hammond, Louisiana. Susan and I had reservations at the Days Inn there. The people who worked there were as nice as could be. However, this was by far the most expensive hotel on our trip and it was the worst in terms of cleanliness, and modernity. I think the front desk clerk said it was 25 years old. It was pretty disgusting. My room smelled strongly of a cover-up spray of some kind. It made me gag when I walked into the room.
I used my Clorox Disinfecting Wipes in the room to clean the door handles, light switches, the desktop, and top of the dresser, the microwave, the refrigerator, the back of the entry door, and the faucet handles. The Clorox wipes were black when I finished.
This was also the only place we stayed that didn't have their breakfast room open. It's a good thing we brought a cooler with fruit, milk, and cereal!
We hung out in our rooms this evening. Tomorrow we will be doing walks in Hammond and Port Huron State Historic Site.
Posted by TravelBug-Susan at 9:30 PM