The Twelve Apostes and Other Scenic Coastline, Part 2 -- Mon., Dec. 3,

﻿
From our waterfall hikes, we drove through Lavers Hill, past Princetown to one of the most famous areas on the Great Ocean Road--The Twelve Apostles. Our weather took a dramatic turn for the worse. Out on the headland the wind was howling coming in from the Bass Strait. Besides being cold, it was trying to blow us over. Brrr! Because of the scenery though, we toughed it out. 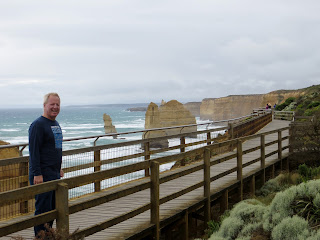 A short drive down the road and we were at Loch Ard Gorge. The weather got nastier--driving rain AND howling wind. I limited my picture taking because of the rain.

Our next scenic lookout was The Arch. Again, a quick stop because of the cold wind. In rapid succession, we stopped at London Bridge and The Grotto. Thankfully they were all short walks because the wind was howling.


By this time we were pretty darned hungry. We had only had a meat pie for lunch, but had done waterfall hikes, lighthouse hike, viewpoint hikes and shivered.
The small town of Peterborough didn't have any food establishments so we headed back to Port Campbell to find a restaurant--we had a choice of four, but 12 Rocks Cafe looked too inviting to pass up and their menu was yummy too. I had Moroccan Chicken with jasmine rice. Bob wanted that too, but I ordered the last one. Bob had a chicken quesadilla, but also had about a third of my dinner too, as it was too much for me. We had a corner window table overlooking the wild, stormy bay and sunset. 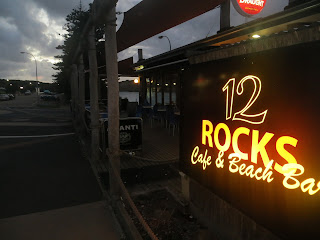 But wait, it's 9:00 p.m. and the day is not over yet. We have a four-hour drive into Melbourne with no hotel reservation. Off we went on back roads destined for Melbourne. We thought we'd stay about 45 minutes away from Melbourne in Geelong (which was closer for us); however when we got to Geelong we had difficulty finding a motel. Australia is not like the U.S. with signs at freeway off-ramps telling you which motels, restaurants, fast food are available.

We got off the freeway in Geelong and saw a sign pointing to motels and a caravan park. We found the caravan park, but no more signs pointing to motels. Sheesh! So we drove city streets and found a Best Western. The sign on the door said it was after hours and we would have to call a phone number to get our room. Our cell phone had a dead battery.

It was 12:30 p.m. We decided our best course of action was to drive to Melbourne where motel registration would most likely be open in the middle of the night. We did not want to stay in downtown where a night costs $250 to $400.

Not being familiar with Melbourne, we had no idea where to look for motels. We drove around for a half hour and gave up.

We found a McDonalds. Bob pulled to the curb in front and got his laptop. Thank goodness for free wi-fi. Bob found a Comfort Inn by the airport.

As we drove down the street to make a U-turn to go back to th airport, lo and behold, there was a Best Western on the corner with 24-hour registration. Bob went in and bought a room for two nights and we were set. It was 2:00 a.m. Tuesday morning.

That's enough blog for one day! Our day was exciting, action-packed and fun, but totally exhausting.