Nothing like having one day doubled to two, but that's what happens when you cross the International Date Line. (Actually we regained the day we lost in November.)

Our last day in Sydney, Australia, was a sunny one. Not a lot was planned but we did want to visit Hyde Park Barracks, a ten-minute walk from our hotel.

Australia's history is similar to America's history in that both started as a penal colony for convicts from England. Many convicts were sent to the U.S., but when America declared independence from England they stopped accepting convicts.

In 1788, the first fleet of 11 convict ships arrived in Sydney, Australia, from England. Many years of ships with convicts sailed to New South Wales, Norfolk Island, Tasmania and Western Australia. We learned all about the convict history. Click on photos to enlarge for reading. 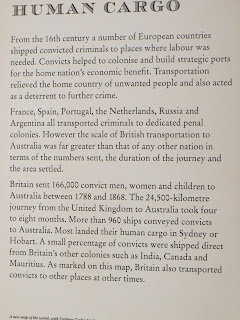 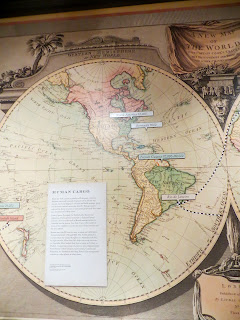 The rats helped preserve history by stealing items and storing them under the floorboards or in holes they tunneled in the floors. Archaeologists had a field day sorting through the nests of rats. 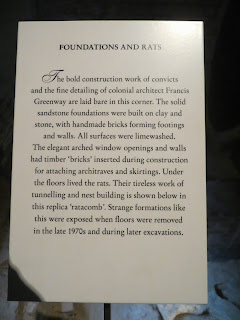 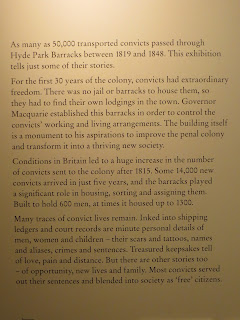 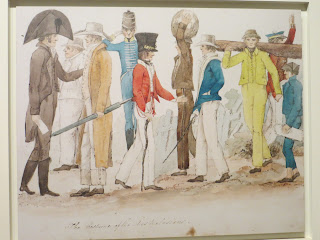 When the convicts were first put off the ships, they had to fend for themselves in finding shelter. But they were needed by the government to build docks, piers, buildings, roads. When they lived in their own places, they were not reliable in getting to work. The govenment deemed it wise to build barracks to house the convicts and keep tabs on them so they would make it to work.

The men were housed in large rooms and slept on hammocks. Peepholes were built into the walls so guards could keep an eye on them. 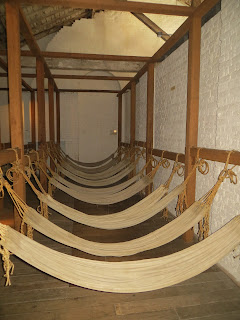 Exhibits in the museum explained everyday life for the convicts, how the different governors treated the convicts, history of orphaned girls shipped in from Ireland, the use of flogging and solitary confinement for punishment, how the archaeologists worked at salvaging and cataloguing artifacts, what types of tasks/work the convicts completed and how the convicts worked their way to becoming free men who owned land, started their families, and became business owners. 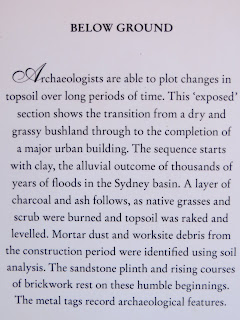 When we were finished at the museum, we walked to a vegetarian restaurant we liked for lunch. On the way we passed the Land and Proprerty Information building and St. Marys Cathedral.

Many of the older residential areas reminded us of New Orleans, Louisiana with their fancy wrought iron balcony railings. 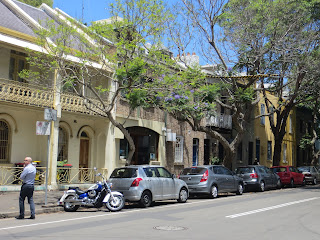 Sydneysiders love their parks. At 2:30 p.m. Hyde Park in the CBD (Central Business District) was filled with sunbathers every way you looked. 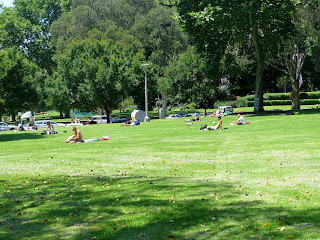 After our enjoyable museum visit, walk and yummy lunch, we walked to the corner of Park and Pitt (prounounced Peet--almost rhymes with peach) to do some shopping for Christmas presents before heading home.

Our shuttle bus picked us up right on time to take us to the airport. Everything was going swimmingly until we reached the Hawaiian Airlines ticket counter. Here in the U.S. we have always gone to a kiosk, entered our Hawaiian Miles number and printed out our boarding passes or had them printed at the ticket counter. We did not have access to a printer in Sydney and we didn't think we'd need the actual printed tickets anyway based on our U.S. experience. We got to the ticket counter and were asked for our e-tickets. Uh-oh. The lady behind the ticket counter said she could not look up our tickets on her computer. Really?

Bob came to the rescue. He opened his computer, logged onto the Sydney airport free wifi and pulled up our e-ticket online. That did it. She allowed us to check our bags and printed our boarding passes for us. Whew!

Customs was a breeze as was security. We had time for a chicken dinner before we boarded the plane, then took off at 9:40 p.m. Australian time on Thursday night, December 6.

Wouldn't you know? Soon after take-off, Hawaiian Airlines served us a full chicken dinner! We certainly had enough to eat.  I watched "The Family Stone," but still wasn't sleepy, so I watched "Napoleon Dynamite." That did it. I slept through most of the movie. After dinner Bob played games on the in-flight entertainment system. He had no trouble falling asleep.

At one point during the night, Bob said I cried out loudly in my sleep. He said he had to hold my hand and comfort me. I have no recollection about my dream that would have caused the outburst.

We arriveed in Honolulu at 10:00 a.m. Thursday, December 6. Crazy. So we got to live December 6 all over again.

After going through customs, collecting our baggage and renting the car, we headed to our friends' home. On the off chance my hairdresser had an opening in the next couple of days, I gave the salon a call.

Meanwhile, at 2:00 p.m., Bob took the car and headed into Honolulu to pick up his packet for the Honolulu Marathon. About ten minutes after he left, my hairdresser called back and said she could take me at 3:15 p.m. The salon was way across the island.

I called Bob to the rescue again. He turned around, came back to pick me up and he took me to my appointment. We were only two minutes late. In fact, Marci was still working on her previous client.

Bob continued back into Honolulu in rush-hour traffic, picked up his packet and stopped in at Runners Hi to see if any of his running ohana (family) were there. He spent a little time with them.

In the meantime, I was happily catching up with Marci while having my hair highlighted and trimmed. From there, I walked to Outback Steakhouse to meet my former co-workers for drinks and pupus (appetizers). It was wonderful to see them again and get all caught up. Bob joined us toward the end of our visit. (We had both worked at the same place so he knew everybody too.)

Dorothea, Liane and Lani, I loved chatting with you all again. Wendy, I'm sorry you couldn't make it. And Christy, I hope I'll see you on Saturday early afternoon.

By the way, Australia does not have the Outback Steakhouse restaurant chain.

So, there you have our one day which was really two days. Confused yet?

Now you have caught up with us. I'm heading for sleepy land to catch some zzzz's.

Travel Bug out.
Posted by TravelBug-Susan at 12:00 AM