Sparks, NV:
A couple of updates since my last blog two weeks ago:
I am a night person. I love to stay up late and sleep in late. About 8:30 on a Wednesday morning, I was awakened from sleep by a tap, tap, tap. Thinking it was someone from the RV park delivering our mail, I laid in bed and tried to ignore it. Tap, tap, tap...tap, tap, tap. Whoever it was was very persistent. Wondering if we again had water spraying out the side of our RV, I got up and peered out the side window shade to see who was at the door. No one there.  Hmm...

Bowie was growling and his tail was still fluffed. I banged on the skylight, but the mocking bird (magpie) continued to get its drink. I pounded on the skylight some more and the bird jumped up to the top of it--not scared in the least. My next action was going to be to open the hatch and turn on the bathroom fan, but he left.

Nature's alarm clock. Time to get up. LOL.

Wednesday, January 25: Worked out today, shopped at Costco. I have been going to the health club three times per week for cardio and weight training. My cardio consists of riding the stationary, recumbent bike. This keeps the pressure off my knees but still gives a good workout. I ride for about 64 minutes and do weights for 15-30 minutes, so overall I have about 1-1/2 hours in the gym.

I have found that riding the stationary bike is the best place to read my magazines. While riding, I am traveling--virtually--to Greece, South America, Italy, basically the world, with National Geographic Traveler, keeping up to date on all things entertainment with my Entertainment Weekly, learning about nutrition and fitness through Prevention and Consumer Reports On Health, and reading interesting stories about everything in Reader's Digest.

After working out and shopping at Costco, I headed out to a friend's house to pick up a book. My car's battery light kept coming on. Not a good thing. As I drove on the freeway, I noticed if I sped up over 65 the battery light went out. Could it be the alternator? Driving back to the 5er, the battery light stayed on most of the way. Must get this checked soon.

Thursday, January 26: I wake up to big, fluffy flakes of falling snow. It's too warm for the snow to stick but it sure is beautiful. 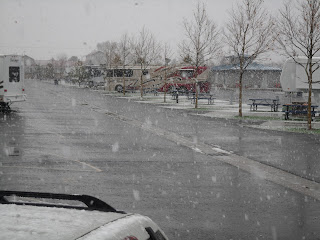 After the weather got the snow out of its system, it cleared up and we had sun. My appointment for part-time PR person at the bookstore was at 10:00 am. See update #2 above.

After the interview, I stopped by Walmart to pick up a few things. The battery light was on continually in my car. When I got to Walmart, I had no power steering and now the ABS (anti-lock braking system) and airbag lights were on too. I finished my shopping and high-tailed it back to the 5er. Just as I pulled into our space, my car died completely. Uh-oh. I had an appointment for 1:00 p.m. at Tires Plus to get my car diagnosed.

I put a call in to Bob to see if he could jump start my battery and then follow me over to the mechanic. His work is five minutes away, so he was able to make some time before 1:00 p.m. to help me out. What a hero!

We got the car to Tires Plus (about 1/2 mile away). Bob continued on his way and I walked back to the RV Park. The call came in about 2:30 p.m. -- both the alternator and battery cable were bad. Estimate for repair: $750. Gulp! Big expense. They didn't have the parts, so the work had to be done on Friday for the alternator and the next Wednesday for the cable package.

The rest of Thursday, I hung out online and, in the evening, watched my TV shows. Around 9:30 pm I got back online and the computer screen and its contents started swirling like a Salvador Dali painting come to life. Vertigo! Ugh. I immediately shut down the computer and got ready for bed before it got way worse. I was in bed by 10:00 p.m., a record for this night owl. Luckily, I got in a quiet and dark place before this became full-fledged vertigo.

Friday, January 27: I had all kinds of plans for today. Got up, ate breakfast, and the vertigo hit full force with the world swirling, vomiting, nausea, diarrhea--the whole shebang. At 9:00 a.m. I returned to bed and laid on my back, vertiginious, until 4:00 p.m. Nasty stuff. I am not happy about the return of vertigo after nine months without it. I got up at 4:00 p.m. and was vertigo free for the rest of the night.

During the day, the mechanic called to tell me the battery cable on my car was not just the negative cable. The whole battery package had to be replaced on my car as it was sold as one piece--add $50.00 to the estimate. They are also going to put some kind of protection on the battery posts, another $10.00.

Bob went to pick up the car Friday evening and paid for all the work, including next Wednesday's battery cable work. Total bill was around $875.00.


Not a great day health wise or budget wise.


Tomorrow's another day. Over and out.
Posted by TravelBug-Susan at 1:15 AM