After resting in the afternoon, we took a short drive to Beatrice, Nebraska, to check another item off my bucket list: Homestead National Historical Park. "Go West, young man." "160 Acres of Land Free to Every Citizen!" "Putting Down Roots." "Success or Failure?"

It was 3-1/2 weeks ago that we were in St. Louis, Missouri, at the Gateway Arch learning about pioneers heading west to claim land for themselves and their families. Nebraska is one of the places that pioneers were headed. 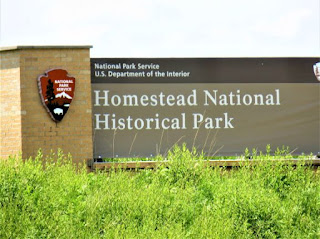 "Like today, it was a roiling, uncertain time of rapid social and economic change--migrants leaving northeastern factories; formerly enslaved people leaving Southern plantations; sharecroppers leaving worn-out fields. Many headed west. All acted on the promise of a dream; mobility and property for people who had none, or who wanted more.

"In the 1800s and early 1900s, promises could be found on print media like the handbills below... The Great Pacific, Great Northern, and Milwaukee railroads launched campaigns featuring agricultural display trains. The cornucopia (horn of plenty) theme (below) dominated lavish, mobile assemblages of foods and dazzling state agricultural fairs...

"Farm journals, flyers, and ads recruited immigrants from East European nations beset by crop failure and depressed agricultural markets in the 1870s and '80s... Twenty-five thousand Europeans, most of them German, crossed the Atlantic in the first half of 1862...

"By 1870 one-fourth the population of Nebraska was foreign-born. By the turn of the century over two million Anglo-Americans, Swedes, Italians, Danes, Finlanders, Hollanders, Icelanders, Hungarians, Russians, Bohemians, Poles, and Ukrainians had relocated to the Great Plains--homesteading's heart. 'Free land,' but also civil freedom, the perception of unlimited resources, independence, and a chance for free education drove the 'briskness in immigration.'

Below are samples of handbills and flyers used to lure immigrants to homestead. 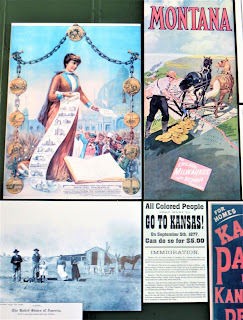 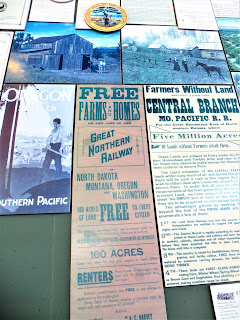 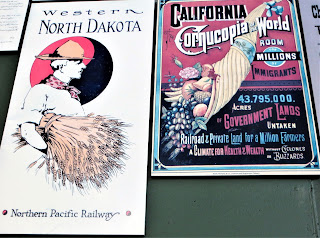 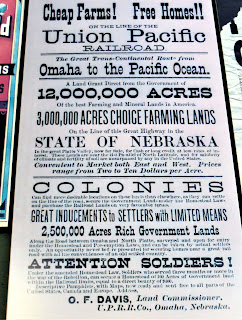 "Territories and states coined names like 'The Treasure State' (Montana...), enhancing their appeal. The Exoduster movement led by Benjamin Singleton, a carpenter and undertaker from Tennessee, promoted a near-Utopian vision of homesteading as a way for former slaves to get land and homes in Kansas. Many African-Americans, including women, managed to file ($18) and 'prove up' (fulfill legal requirements) on claims."

"He or she had only to be the head of a household, at least 21 years of age and certify that he or she had never taken up arms against the United States to claim a 160-acre parcel of land. Settlers from all walks of life including newly arrived immigrants, farmers without land of their own from the East, single women, and former slaves came to meet the challenge of 'proving up' and keeping this 'free land.' Each homesteader had to live on the land, build a home, make improvements, and farm for five years before they were eligible to 'prove up.' A total filing fee of $18 was the only money required, but sacrifice and hard work exacted a different price from the hopeful settlers."

"The Homestead Act of 1862 is one of the most important pieces of legislation in the history of the United States. Signed into law by Abraham Lincoln in the midst of the Civil War, this act would eventually result in the transfer of 270 million acres of public lands--or 10 percent of the area of the United States--to private individuals."

Let's take a look around the Visitor Center and grounds. There is an outdoor area with a trail around one acre. This sign managed to get it into my head how far these settlers had to walk just to farm their land. No tractors or combines or thrashers, yet. Although those will come. 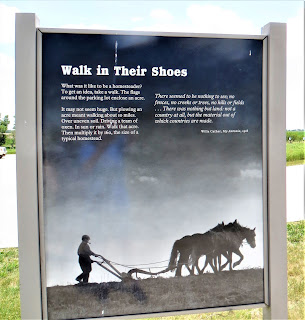 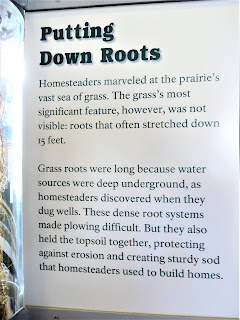 Below, Bob is standing next to a glass tube that shows how much of the plant is above ground (the grass above his hand), and how deep the roots go into the soil to reach water. The root system is what held the topsoil together, kept erosion from occurring, and created sturdy sod that could be used to make houses. 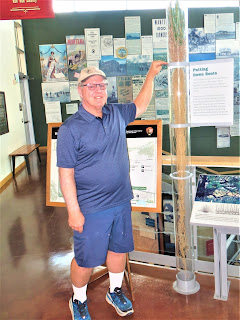 No one consulted the Native Americans or offered them the land. Nope. We just took it away from them. What a shame. 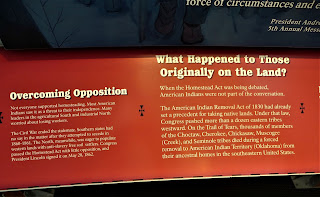 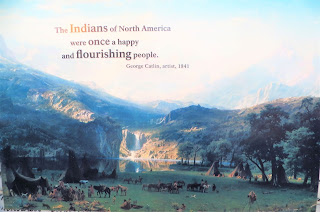 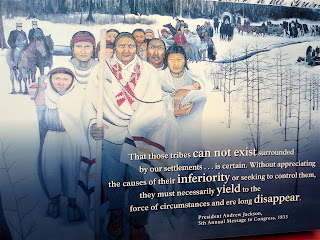 Americans got their Manifest Destiny. Native Americans were lied to, made to give up their land, and forced to walk to reservations set up by the government (The Trail of Tears). 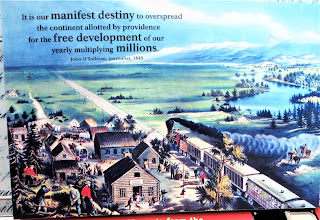 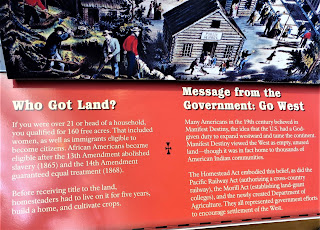 The homesteader's life was not easy. There was nothing out there on the prairie. They had to find water, start growing crops, and build a house.

The Homestead brochure summed up their experiences thus:

"Cycles of boom and bust, soaring hope and deep despair, would temper but not wholly destroy homesteading's promise. Many failed to 'prove up' their claims. Many more--across 30 states, from diverse national, cultural, and economic strata--faced drought, prairie fires, hailstorms, grasshopper plagues, and often crushing loneliness" [and death]. Some persevered.

"Over 123 years, homesteading gave hope to many. It offered immigrants a road map that took them from serfdom to citizen--and property ownership. It offered the nation's own disenfranchised--the formerly enslaved, veterans of civil and world wars, emigrants from northeastern factory towns, and southern sharecroppers--men and women alike--a chance."

The museum had displays about the Agricultural Revolution and all the new inventions that resulted from people's ingenuity. 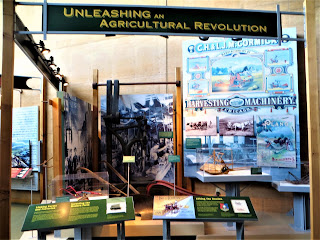 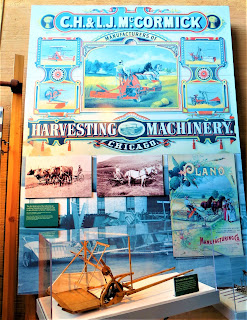 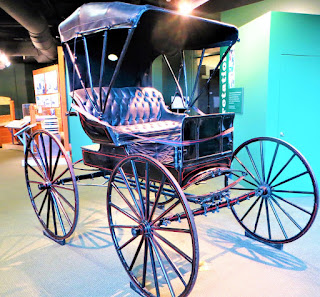 Here's something I bet you didn't know about outhouse crescent moons. 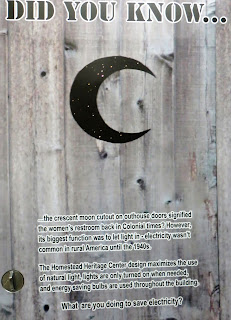 Most of the exhibits at the Education Center were in a back wing of the building and out on the back patio. We learned about the progression of farm implements and carriages. 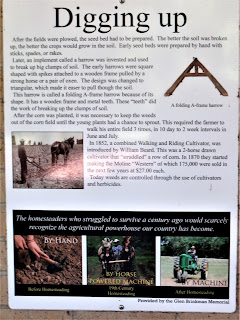 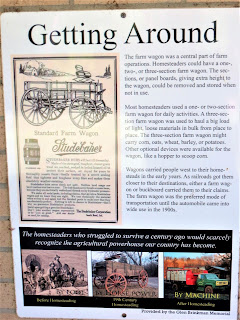 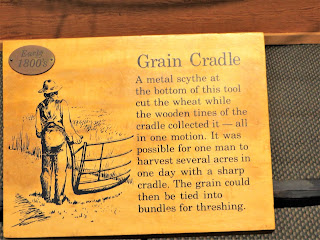 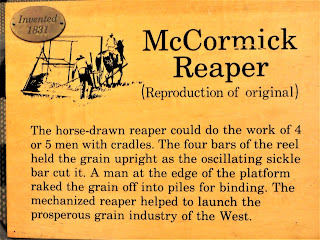 There was more to see at the two Homestead areas, but it was really hot and I did not want to expose myself to the heat after my heat exhaustion earlier in the day. We missed the Freeman School and Palmer-Epard Cabin. We also did not do the trails around the Education Center.

With that, we called it a day and stopped at Shoemaker's Restaurant on our way back to the campground. It was an enjoyable place to eat. There were exhibits of all kinds of memorabilia, a HUGE mural painted up high surrounding the inside of the travel store, and they had good food and good service. Their menu had interesting information about Route 6, at one time the longest road in the U.S. It started at the tip of Cape Cod, Massachusetts, and ended on the beach in Long Beach, California.

After dinner, we headed back to our campsite at Pawnee State Recreation Area NE, Lakeview Campground. And so ends our time in Lincoln, Nebraska. Tomorrow, we head to Sioux Falls, South Dakota. Oh, boy! Another bucket list item.
Posted by TravelBug-Susan at 11:30 PM