Monday, June 7: Forward progress was made today from Wichita, Kansas, to the Riverside Corps of Engineers Park in Marquette, Kansas (just west of Lindsborg). Our campsite was on the Smoky Hill River downstream from the dam but was up high on a bank. Any release of water from the dam would not flood our site. Apparently, Kanopolis Lake behind the dam was full and they were releasing some water from it. That was nice because we could hear the water rushing past our site.

This campground was almost empty. I think there were maybe three RVs. According to the park rangers, most people camp on the other side of the dam at Kanopolis Lake in Venango Park (also a COE campground). 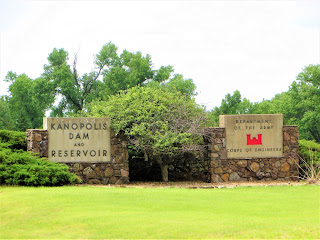 Our love sponge cat, Sunnie, had been very sick overnight with vomiting and diarrhea. He was going on three days with almost nothing to eat or drink. This is not good for a cat with diabetes. We found a vet in Lindsborg who agreed to fit Sunnie into her busy day. She couldn't see him until 3:30 p.m. Bob went out with his bike to explore around the campground and dam.
We took Sunnie to see the vet. She did a complete physical. I showed her the photos of how sick he had been. She was shocked because he looked completely healthy. His blood glucose was over 400 which was almost up to what it was in November 2019 when he first was diagnosed with diabetes. He had been on 1.5 units of insulin every 12 hours. She asked us not to give him his insulin that night and see how he did. She gave him an anti-emetic shot to keep him from vomiting, put him on an anti-diarrheal and appetite stimulant. She asked us to call her in the morning and let her know how he was doing. He still did not eat or drink that night.

Tuesday, June 8: We called the vet to let her know that Sunnie had stopped vomiting. He was taking little sips of water and a few bites of food. She had us start him back on his insulin. She wanted to see him tomorrow morning to check him out again.

When our phone conversation with the vet was done, we headed into town to do our 10k walk. I had done this walk with Susan and Darren Medlin in August 2017 on our way to the total eclipse walking weekend in Grand Island, Nebraska. I'm so far behind on blogs that I have not done the blog for the 2017 visit to Lindsborg, and it's one of my favorite walks! Välkommen to "Little Sweden, U.S.A.!" I especially like the painted Dala horses. You'll find out about those later. 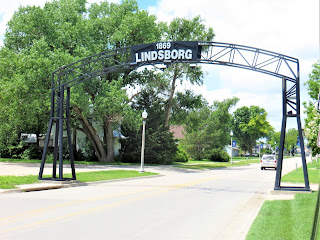 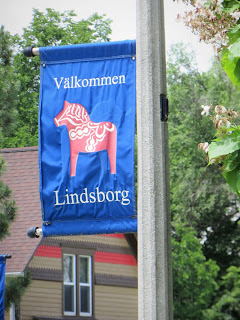 The city of Lindsborg was settled in the spring of 1869 by a group of Swedish immigrants from the Värmland province of Sweden. Led by Pastor Olof Olsson, they envisioned a community rich in culture, learning, religion, business, and farming. Lindsborg is nestled in the rolling hills of the fertile Smoky Valley, which is abundant in both cropland and pastureland. [This information is from lindsborgcity.org.]

While I was looking up the city history, I got sucked down a rabbit hole and moseyed over to the visitlindsborg.com site. There is an article about a Swedish tradition that I have to share with you...

Do you know about the tradition of sju sorters kakor?

From Magnus Nilsson, the story goes: "In Sweden, from the mid-nineteenth century until almost today, seven kinds of cookies (excluding buns and cakes, of course) was considered a perfect number to serve your guests...Any less could be considered a sign of laziness or lack of generosity, and more was simply braggy (a cardinal sin in Sweden). Both of my grandmothers, at any time, had seven cookies ready to go in various tins in their cupboards. I think they were, perhaps, part of the last generation to feel strongly about this old custom. The term "sjo sorters kakor" meaning "seven kinds of cookies," became so emblematic over the years that it led to the creation of one of Sweden's most important cookbooks, "Sju Sorters Kakor." [That's a tradition I like! It sort of carries over into current times when you go to a Christmas Cookie Exchange Party. Yummy]

We started walking at about 11 a.m. and it was hot. As we walked through neighborhoods, we did our best to stay in the shade. However, when we got to the bike trail, no more shade. We walked quickly on this part and I took photos of historical markers to read later.

Okay, so what is a Dala horse? It is perhaps Sweden's best-known icon, a bluntly rounded, tail-free horse. It is thought first to have been whittled next to the fire during long, cold Scandinavian nights. Lindsborg adopted the Dala symbol of Swedish folk craft as a symbol of identity and welcome. In 2000, Lindsborg decided to cast the traditional Dala shape in large fiberglass forms -- an idea patterned after Chicago's cows on Michigan Avenue. The last count of the Wild Dala Horse herd is 38.

The Dala horses are in front of businesses and their likeness adorns front porch signs, coffee mugs, city letterhead, and even police cruisers. The Wild Dala Horses celebrate contemporary Lindsborg--its history, Swedish-Americana, the arts, everyday work and life, social groups and families, and of course, wordplay [my favorite]. More photos of Dala horses to come.

As we left Bethany College, we saw the Sandzen Gallery. Our walk instructions said the gallery is free. This was a wonderful stop. Not only did we learn about Birger Sandzen, but we also cooled off and used the restrooms.

Birger Sandzen was born in Blidsberg, Sweden in 1871. He grew up in a home where music, art, and literature were appreciated and encouraged. He wanted to attend the Royal Academy in Stockholm, but he tired of waiting for an opening.  Instead, he joined a group of young art students taking classes from other artists. Those classes evolved into the "Artists' League School."

After studying two years in Stockholm, he moved to Paris where he worked with another artist, continued drawing, and befriended several Americans who influenced his move to the United States.

Sandzen contacted Bethany College in Lindsborg about the potential of teaching at Bethany. Sandzen was offered a position in 1894 as a language instructor while assisting in the art and vocal music departments. His initial art duties were to teach watercolor painting. By 1899, he became the principal art professor. Throughout the years, he had arduous teaching schedules which included romance languages, art history, and esthetics, in addition to drawing and painting classes. He remained at Bethany for the remainder of his career.

A key to Birger Sandzen's thoughts about painting can be found in a paragraph from an article he wrote for The Fine Arts magazine in January 1915. "Fortunately, every artist has the opportunity of consulting a teacher that is always ready to give the very best advice to the sincere and unsophisticated disciple. The name of this great master is Nature...Individuality and nature in honest partnership will always create new and fascinating works of art that will never grow old and never weaken."

Further insights can be found in many of his letters: "my gift to America is to make one realize how beautiful the simplest landscape is and how alive, vigorous, and changing our trees and rocks are. The gift of understanding beauty is the greatest anyone can make to another human being." In another letter, "painting was my greatest ambition--not just to paint pictures to sell, but to understand the country about me and about its formation. When this was understood, I could paint an American landscape and show how beautiful it was to those who had not yet realized how lovely America is."

Here are photos of the Sandzen Gallery: 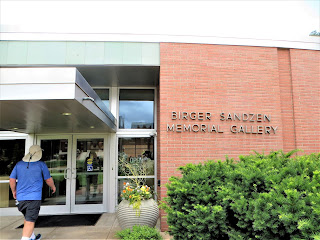 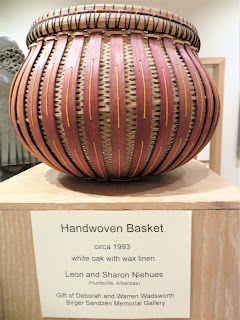 We wound through beautiful neighborhoods with lots of trees. The shade kept us a few degrees cooler. Yay! 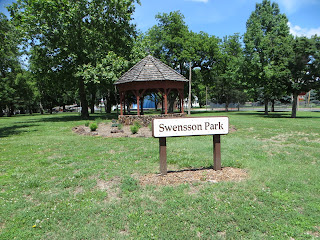 Main St. is next on our walk. We'll introduce you to a number of Wild Dala Horses that line the street.

The photo below is a very special Dala horse. The sponsor is the Lindsborg Sesquicentennial Committee. The marker reads:
"This Wild Dala was made from our whole history-
So her official Wild Dala name is Legacy.
Made of crazy quilt patches with a trail of kurbits flowers,
Flowed from the brush of her maker, who spend many an hour
Researching and sketching and committing to paint,
One hundred and fifty years later, from immigrant saints.
Sweden to the Plains-is part one of our theme
We're Living the Legacy, pure heaven-their dream."


The next Dala horse is outside the Anatoly Karpov International School of Chess.


Once we finished looking at the Dala horses on Main Street, we continued on until we came to a water park, museum, and then the river.

On our way back, we passed this cute dog park: "Scentral Bark." There were also a number of historical markers. If you're interested, I posted them here for you to read. 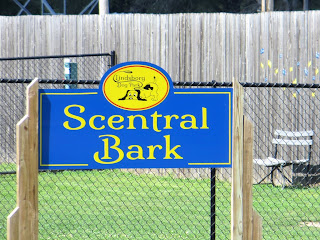 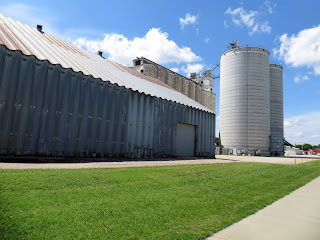 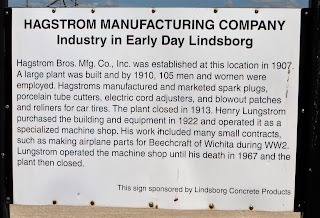 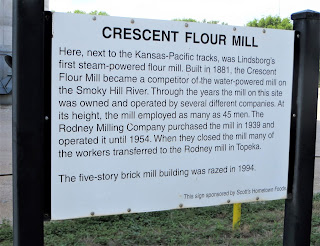 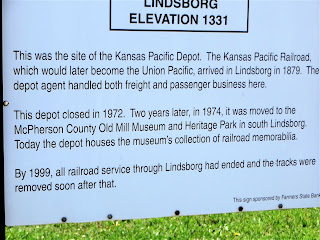 The walk came to an end and we headed back to our truck. It was lunchtime and we went back to the 5th wheel to eat and check on Sunnie. He seemed to be doing a little better.

Posted by TravelBug-Susan at 11:00 PM