Today, we traveled 271 miles from Larchwood, Iowa, to Glyndon, Minnesota. When we started this trip to Madison, Wisconsin, to attend the AVA walking convention, Bob had two states left that he hadn't been in: North Dakota and Minnesota. He wanted to make sure he ticked off all his state boxes on this trip. so here we are!

The campground at Buffalo River State Park is small with sites that are well spaced out. The hookup is electricity, but there are water spigots in different places around the park and a freshwater spigot in the dump station area (separate from the actual dump sites). The sites are large and level. There are trails through the park for walking and bike riding (not paved).

After we set up the 5th wheel and had a late lunch, we decided to do a three-mile walk on trails along the Buffalo River. It was late afternoon heading into dusk when we started.

There is a lot of wildlife in this park. I was a bit intrigued by the badgers. I have never seen a badger in the wild. However, due to their reputation, I'm pretty sure I don't want to run into one unexpectedly!

As we walked through another section of the campground, we searched for the start of the trail that was supposed to be there. We eventually found it. The trail took us down to the river level. The sand on the shore had what I'm sure were badger claw tracks! Wow. We didn't linger long in that part of the trail. Bushes and weeds had grown up from recent rains. Who knows what was lurking there?!

I think we were not on the main trail, so I was happy when I saw a bridge. The main trail crossed the bridge. 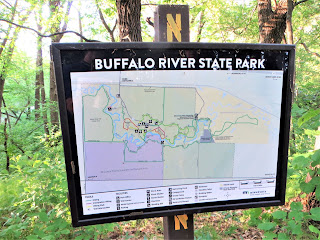 Once we were on the main trail, it was easy to know where to go because it was well marked and mowed. From the forest, we came out into a prairie. 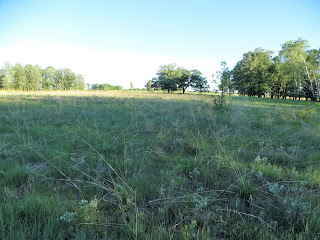 Even though it was getting late, we weren't bothered by many bugs. That was a relief. The temperature was pleasant and it was so relaxing to walk and hang out with Bob in the beauty of nature.

We saw a cedar waxwing and another bird I couldn't get a good picture of. We hustled back to the campground. 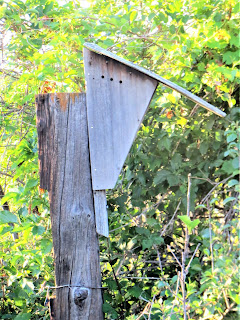 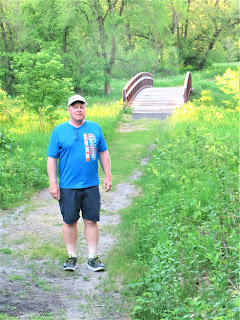 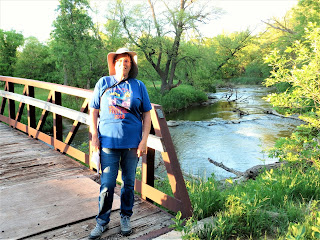 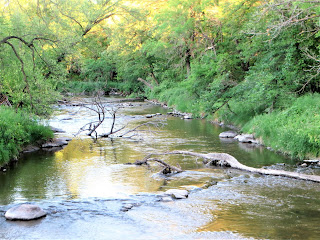 Bob was walking in front of me and I saw a black spot on the back of his calf. I made him stop so I could see what it was. It was a tick! Ewwww. I flicked it off of his leg. I HATE ticks! 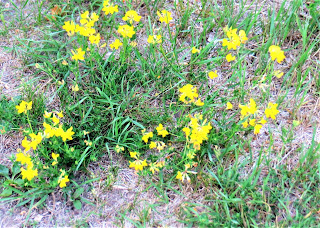 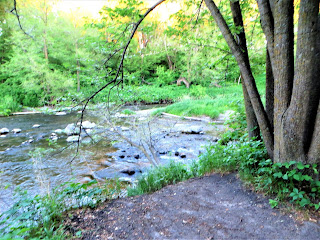 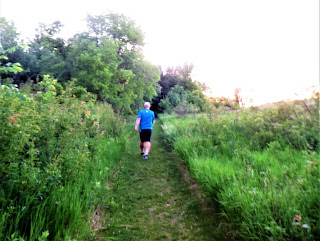 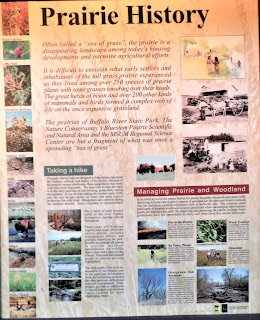 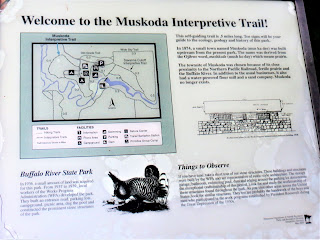 I was able to get some photos of the campground before it got too dark.

Tomorrow, we will do the Fargo, North Dakota, Volksmarch. Good night, all.

Posted by TravelBug-Susan at 10:00 PM